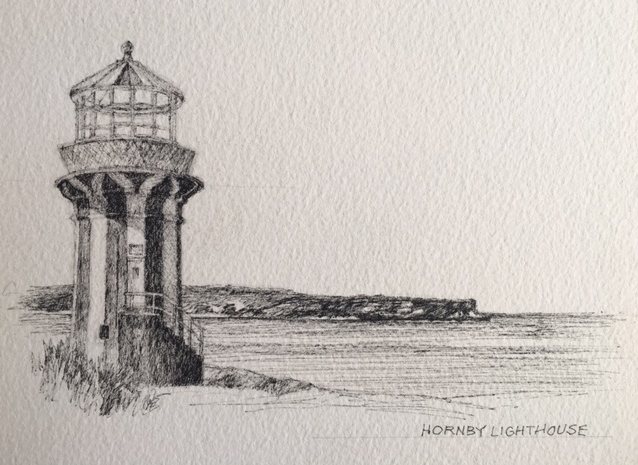 What a difference a hemisphere makes. I left Sydney with unsightly heat rashes around my ankles from walking in 38 degrees while wearing woollen socks and landed in UK where there was torrential rain to greet me and tops of 10 degrees. It was an unexpected trip to England and a difficult one with much time spent in hospital with my mum, but I was at least able to walk in weather that I’m likely to be finding next year when I’m Walking The Black Dog. 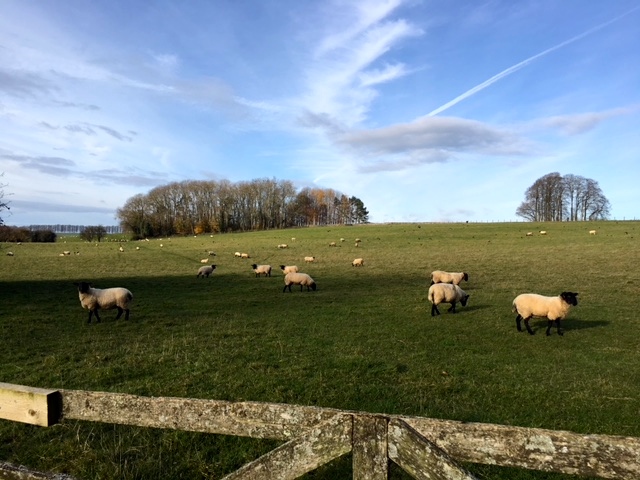 Walking the Monarch Way in The Cotswolds

My visit to England was a timely reminder of why I’d chosen to take on the walk in the first place. Yes, it’s important for me to be raising money for the two mental health charities. And certainly I know that the exercise in my life is vital to my physical well-being. But walking this month has reminded me of the time for mindfulness it enables, which is key to my own mental health. I remember when I was walking the Thames that all the podcasts and playlists I’d so carefully prepared, remained untouched. It was the silence I craved, the time to live in the moment, to focus on the river and its environs. To tune into the bird song and notice the ripples caused by surfacing fish. There’s something about walking in the countryside which makes this possible .. for the past few months as I’ve been walking in the city in Sydney, I’ve devoured podcasts, TED talks, playlists. My mind has been ‘busy’. I expect there’s some deep and meaningful conclusion to draw from this but all I know is that I feel so much more at peace walking in the countryside.

The walks I’ve been doing this month have been largely in the English Cotswolds with London and Kent thrown in for good measure. 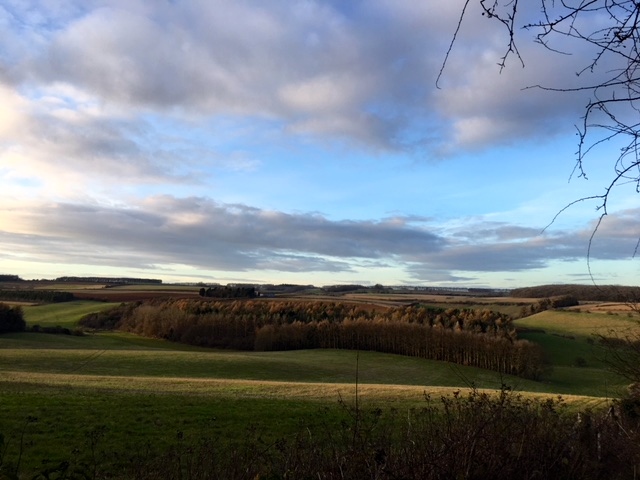 The day coming to a close near Cold Aston 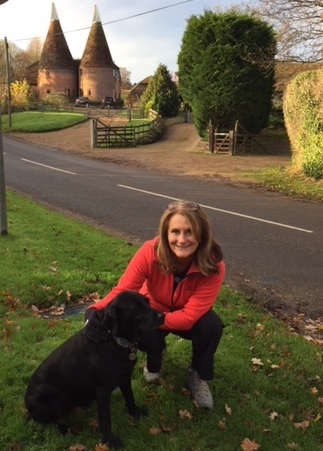 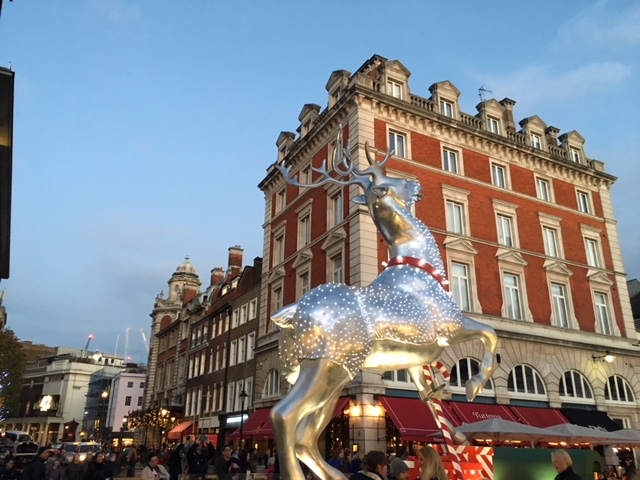 The trees had virtually shed their leaves and the days were the short ones I always associate with my birthday .. I’m a November baby. Many of the days were grey and lank. But .. call me weird if you want, I love these days just as much as I do sunshine. There’s something about the Englishness, something melancholic and something about the promise of reaching a warm, cosily-lit home at the end of the day that appeals to me. Keats’ poem, ‘To Autumn’ has always been one of my favourites, with its ‘Season of mists and mellow fruitfulness’. 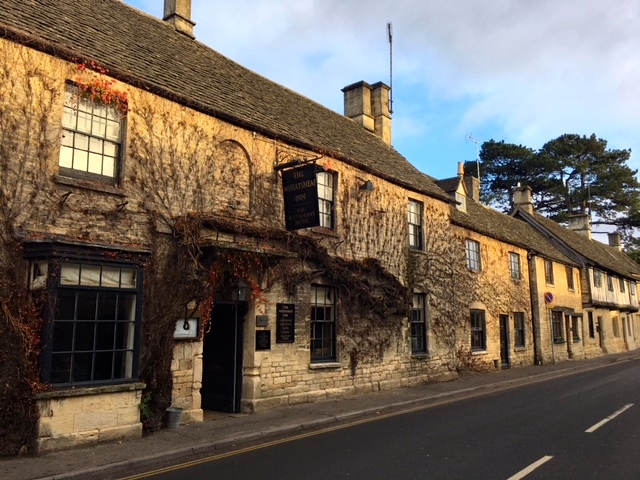 The welcoming Wheatsheaf at Northleach .. 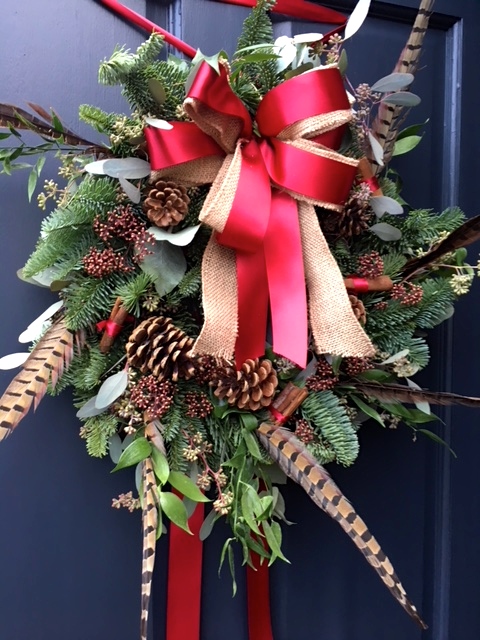 .. where the wreath on the door has the shooting season greeting Christmas

The terrain has been very different on these November walks. I swapped busy roads for rough trails and tarmac for the edges of ploughed fields. It slowed me down but it was kinder to my feet. It gave me a chance to try out all my wet weather gear too, which had been languishing at the bottom of my rucksack in Sydney. I put in huge amounts of (very pleasurable) research looking at the brand I should buy and eventually decided upon Arcteryx. I was not disappointed with my choice, remaining snug and dry, no matter how much it rained upon me. One of my criterion had been that the material wouldn’t make a swishing sound as I moved in it. Again Arcteryx delivered. 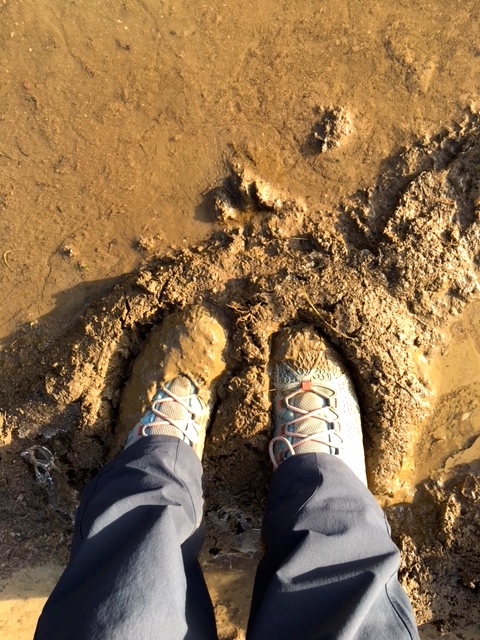 My beautiful La Sportivas prevailing against the autumn mud

It was the shooting season in England and the lanes I walked were full of panicked pheasant and whirring partridges. Grey squirrels darted across my path, red kites swooped overhead enjoying the thermals and I was thrilled as well to see roe deer leap fences ahead of me. In the Baltic yet sunny days I laced my way back and forth across the Roman Fosse Way. I walked the picturesque streets of Cotswold villages and towns like Cold Aston, Bibury and Stow on the Wold, dipping into the warm and welcoming pubs, including my all time favourite, The Wheatsheaf at Northleach. http://theluckyonion.com/property/the-wheatsheaf/ 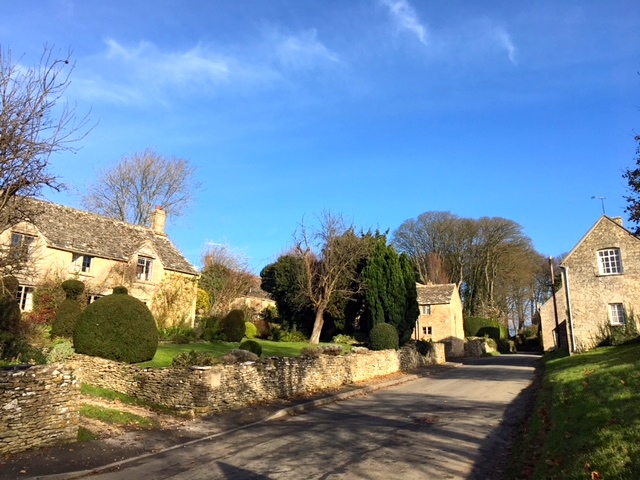 Cold Aston in the Cotswolds

December will bring more hot and sweaty walking as I head back home. I’m hopeful that I can get my lovely boy to walk with me and head off to do some national park walking in New South Wales. I’m very aware that I’ve done little map-reading so far and given my propensity for getting lost even in airports and carparks, it’s a skill I need to work on. National parks will hopefully give me that opportunity. He’s got Kilimanjaro in his sights for January so it will also be good for both of us to climb lots of steps in preparation. I’m hoping to send him up with a Walking The Black Dog flag to wave at the summit!

Black Dog Tails
Maggie is a black lab guiding dog in New Jersey. She’s given Julianna sufficient independence to go to college. Read about Maggie, Luther, Louie and Jax on the same site when they graduated from guiding school in 2017. 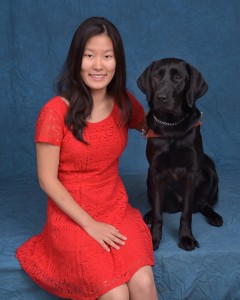