When I planned this walk a year ago, I chose the first of March to begin, imagining I would be starting in the spring. Daffodils, gambolling lambs and lengthening days full of energy-giving sunshine .. you get the idea. I had not counted on the Beast of the East and Storm Emma. Nor had Cornwall, come to that. As I made my way down the south-western counties by train yesterday, the countryside was shrouded in snow. Very, very pretty. But with the prospect of the Beast and Emma conspiring to bring blizzards for the first time in centuries to Cornwall (ok .. decades), my excitement butterflies were now mixed up with more than a small dose of apprehension. 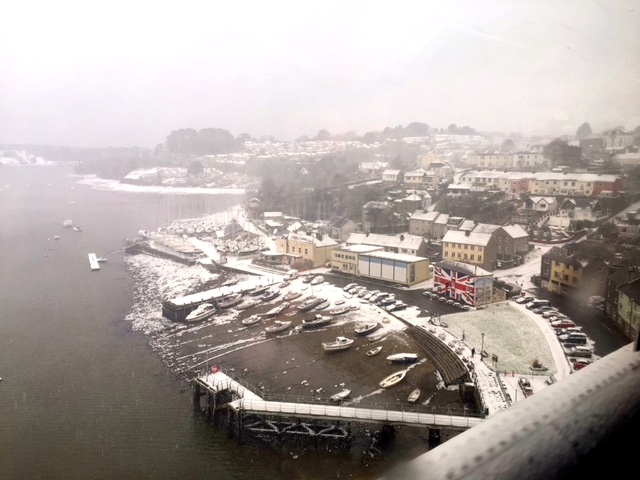 View from the train

Arriving in Penzance to find all bus and taxi drivers had scarpered home to spend the rest of the day by the fire, I did the only thing a girl could do and retired to the pub. And what could be better than a pub with a Jolly Roger flag flapping from above the front door.

The gods were looking after me in a big way yesterday. My way to Pendeen may have been scuppered by taxi and bus but I had my own Light Brigade who came to my rescue a few hours later. Liz and Graham, undeterred by their cancelled flight from London, took up the challenge and came down from London by train and hire car. Bundled into their SUV Mr Light drove and Mrs Light navigated our way across the indescribably pretty countryside as the sun set, to Pendeen and our bed for the night. 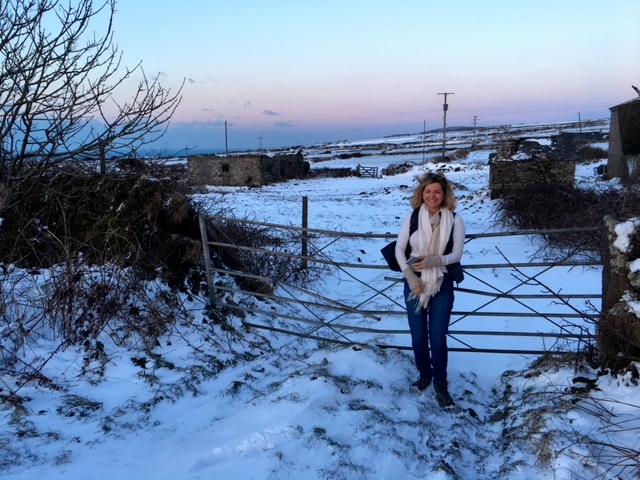 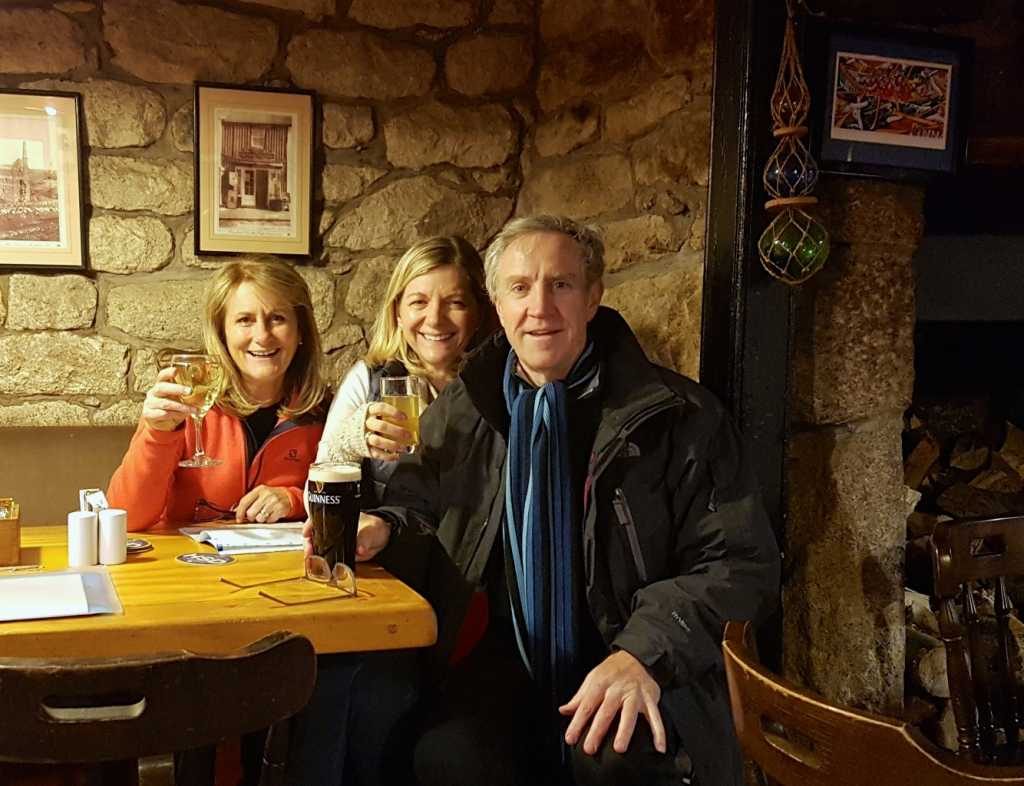 This morning I woke up at 4am. I felt as excited as a kid on Christmas Day!  I’d been looking forward to this moment for months and months. Plotting and planning and fine-tuning the route. Chiselling down the contents of my pack. Walking my socks off in preparation for walking Land’s End to John o’Groats..  I could barely believe the day had arrived .. nor that it was a complete white out! The launch dinner and the sunshine of Sydney seemed a million miles away. Stepping out into sub zero temps with snow and a bitter wind was not going to be stopping me!

The idea was to drive to Land’s End and then walk back to Pendeen along the South West Coast Path. However, Emma and the Beast had other plans for us. The road was littered with abandoned cars and very soon we too had to leave ours as the steep and icy road leading to Land’s End was closed. Impassable. And so started the trek in the snow to get to Land’s End to start the walk! And so too started a rather upside down first day .. we’d started out from the North Inn which was my most southerly accommodation of the walk; found ourselves walking due south to get to Land’s End .. which felt all wrong when I should have been heading north; and then, with temperatures plummeting we hitched a lift back to the car. Yes, you heard right .. hitched a lift! BUT I promise you, from the car back to Pendeen, Liz and I walked while Graham took charge of the car. So, the net result was that between Land’s End and Pendeen I walked the whole way! As planned! The circumstances were exceptional, don’t you think! 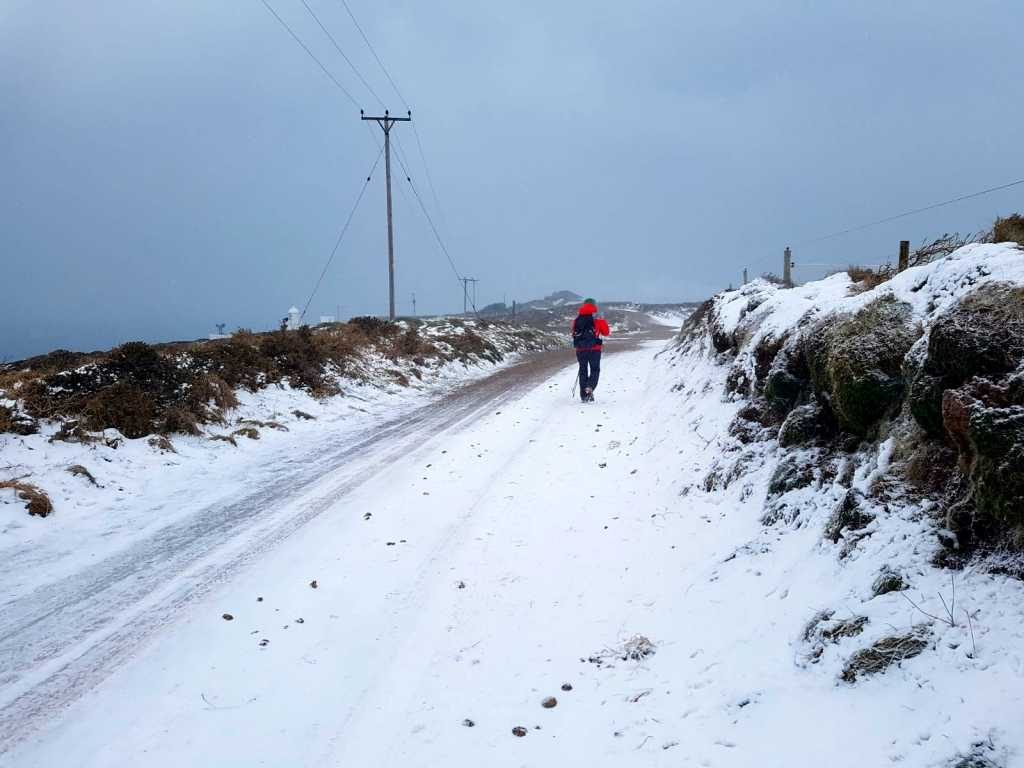 The walk to get to the start of the walk 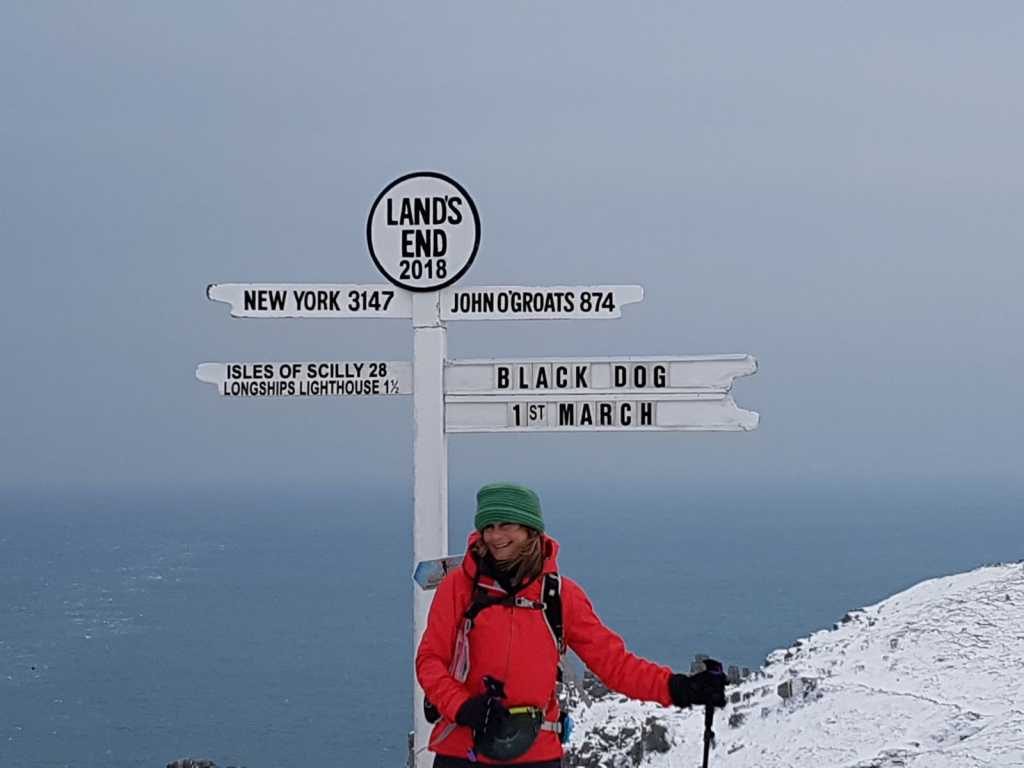 Getting to the start

I’d like to know if I’m the first LEJOGer to start the journey in the snow in Cornwall. I’m sure there’ll have been a few starting out from John o’Groats who have had to put on their skiing kit to brave the chill. Still, there have been some great stats recorded about the walk over the years. The first recorded End to End walk was completed by the brothers John and Robert Naylor in 1871. The fastest time between the two points came in 1988 when a McDonnell Douglas F-4K Phantom made it in a stunning 46 minutes 44 seconds. On the silliness front, David Sullivan hit a ball all the way from end to end in 2005, enabling him to pitch it in the Guinness Book of Records, as the longest golf hole in the country. Other modes of transport used to cover the miles have been horse-drawn carriages, a microlight, various traction engines and my personal favourite: a motorised supermarket trolley. However, it’s Andrew Rivett who holds the record for the fastest on foot .. a staggering 9 days 2 hours 26 minutes, meaning he ran an average of 18 hours a day. Well, Andrew can sleep soundly in his bivouac knowing a challenge is not about to be mounted!

For the first couple of weeks of the End to End, I’ve planned to walk along the northern section of the South West Coast Path, a national trail which hugs the Cornish coastline. Today it was just way too hazardous and I suspect that tomorrow will be the same. The Path is supposed to be ruggedly beautiful but I’ve also been warned about the many steps along the route, which can wreak havoc with your knees. In preparation I’ve been clambering up and down the stairs on the walk between Bondi and Bronte beaches, along the coastal path from the Spit to Manly and in our stupidly steep garden in sunny Sydney, But for now my knees are safe. 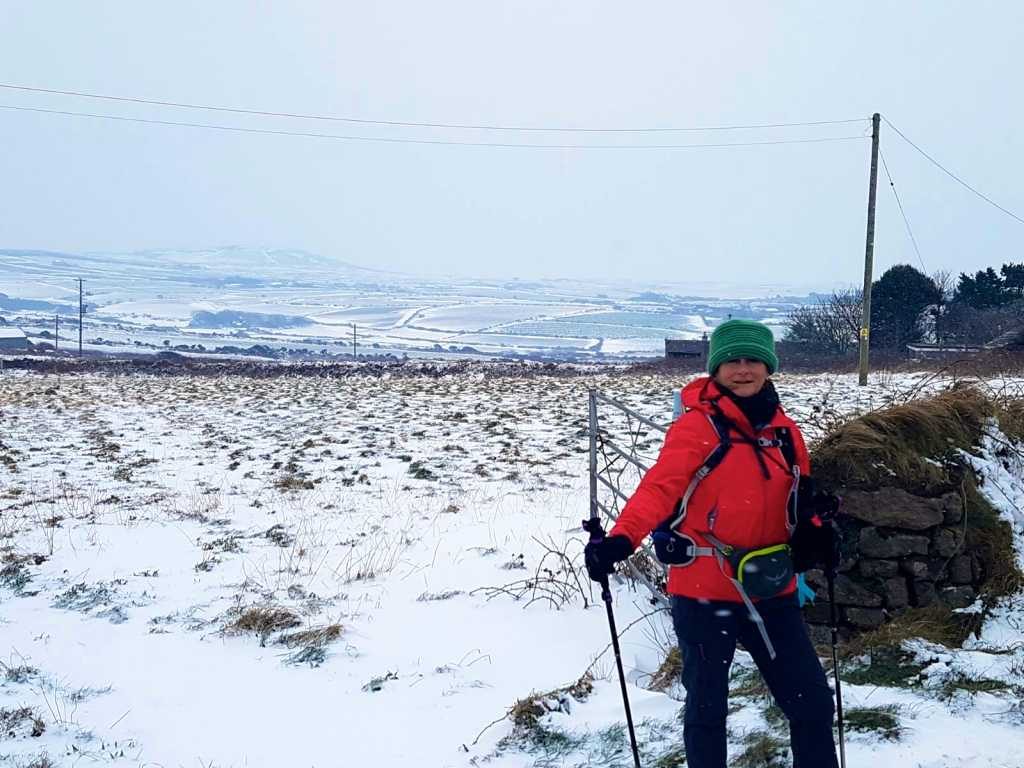 The coast of Cornwall, particularly in the south, is hugely rich in legends and history. Think Tintagel, Poldark and Jamaica Inn. Tales of wrecks, wreckers and smugglers. It also has a mining history going back to the Bronze Age. Just off the coast between Land’s End and the Scilly Isles, beneath the waves, lies the lost land of Lyoness, a significant part of King Arthur’s kingdom. It’s believed it was washed to sea on a cataclysmically stormy night, many moons ago .. not unlike today! Numerous smugglers have also met their deaths in these treacherous waters and there are apparently over 130 ship-wrecks littered in watery graves, just offshore. And that’s just the recorded ones. Brrrr! 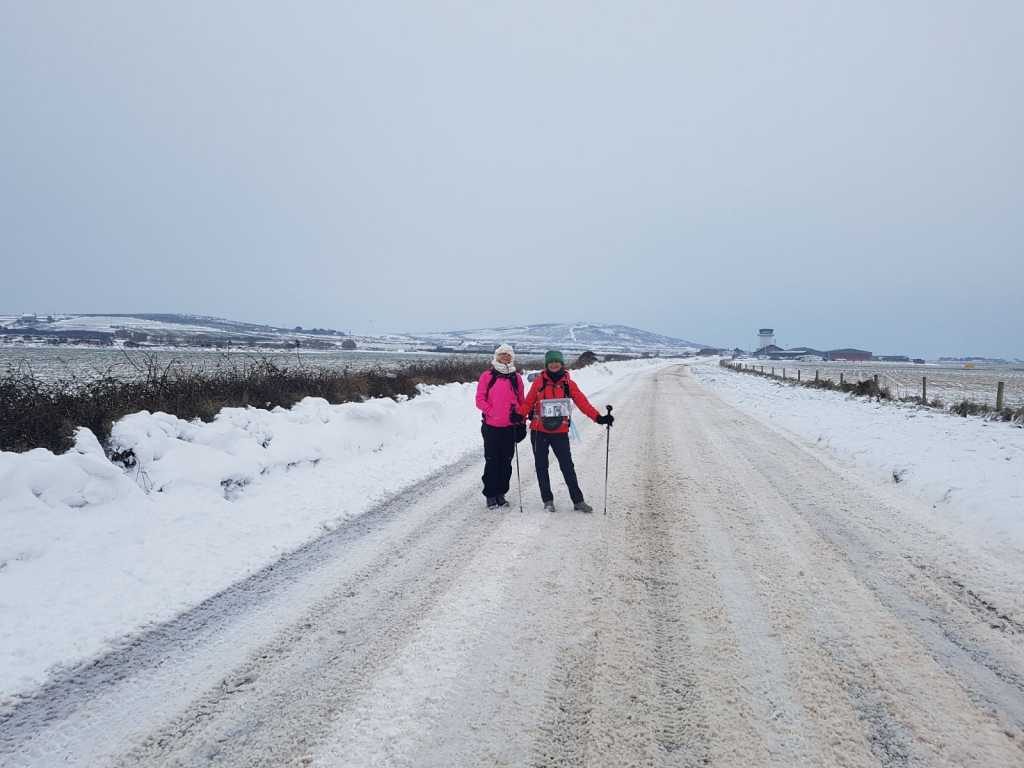 Liz and I heading south ..

Tonight I’m back at the North Inn in Pendeen and the lovely Lights have headed back to the warmth of the city. The pub is a lively tavern and like many other Cornish villages on or near the coast, it had a reputation at one time for smuggling. Poldark was filmed not far from here and the landlord, along with other locals, were convincing extras in the series. 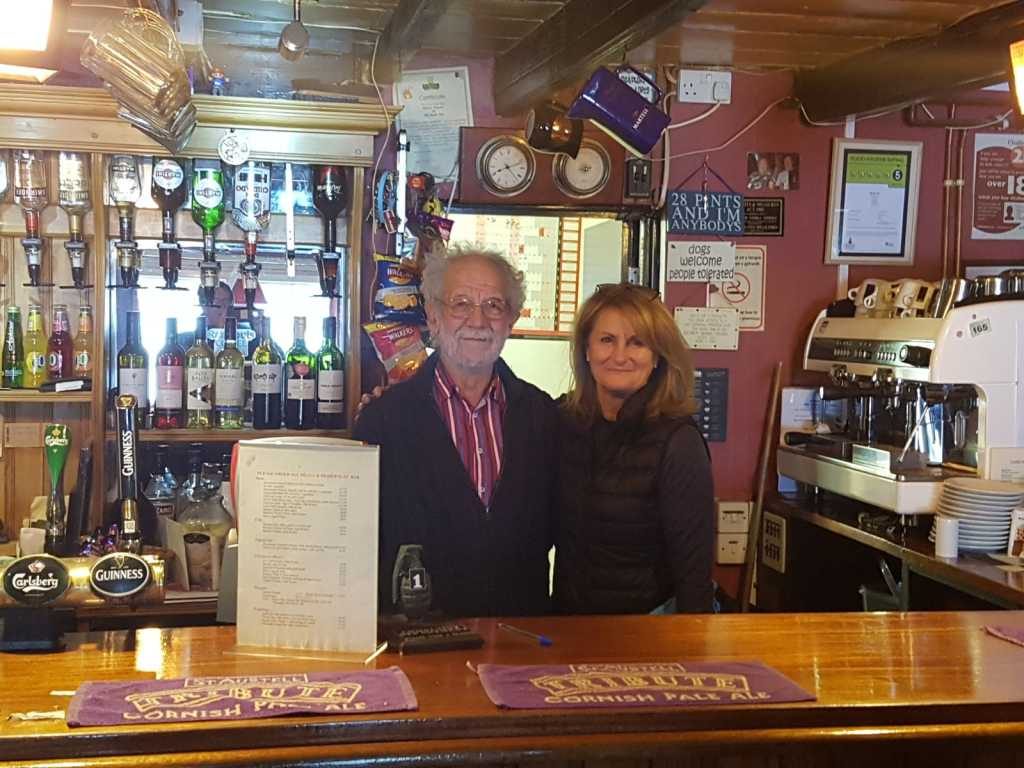 The first day has been a long one ..  waking up in the wee hours, impatient to get going. And walking in snow is surprisingly tiring without skis!

I knew that I would be bowled over by the kindness of strangers on this walk. All the blogs I’ve read have said this. Today I was so grateful to Lou and Mike who went out of their way to drive us back to our car. They’re just starting up a B&B in the area which I’m sure will be a huge success. If you’re in the area be sure to book with them .. you’re bound to have the warmest of welcomes: www.landsendholidays.co.uk

Black Dog Tails
Before I can sleep I must introduce you to Jake and Mary Flood. At 10 months old Jake was abandoned by his owner with appalling injuries. Mary nursed him back to health and then trained him as a rescue dog. He helped hundreds after Hurricanes Rita and Katrina and was one of a handful of brave dogs who worked on 9/11, rescuing survivors of the terrorist attack. No wonder a top Manhattan restaurant rewarded him with one of their best sirloins! 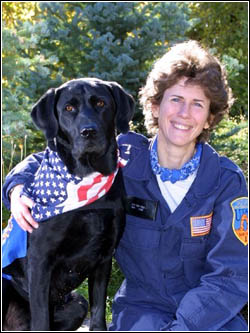