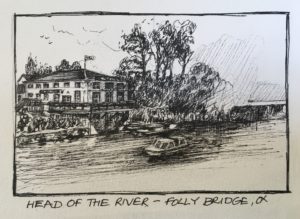 The day started with delicious porridge, courtesy of the Flanagans. Great to see them, especially with the added bonus of catching up with Anne and the gorgeous Teddy. After juggling cars we arrived back at the Barley Mow in Clifton Hampden, where we’d had dinner the evening before. The village is as pretty as a picture, with its thatched cottages, red brick bridge and St Michael and All Angels Church, designed by Sir Gilbert Scott .. he of the London Albert Memorial fame.

Just as we were setting off, we were set upon by a couple from Road Maintenance, equipped with high visibility vests and in the case of the tall one, a pair of thongs. Not a pleasant sight. No matter how much we ignored him, he continued to stick like glue to us. It was ever thus. 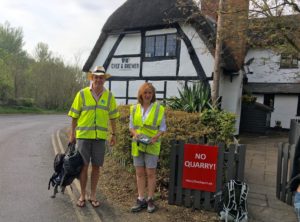 It would have been oh so easy at this point to take a huge shortcut, across a couple of fields to beyond Abingdon, as the river makes an eight mile loop back on itself. But we are bwave and we are wawwiers! And so off we set along a very flat section of the Thames, past Clifton Lock and along Clifton Cut. Instead of following the meandering route of the river, the path hugs the curved cut made by the Navigation Commission, created to make boat transportation in the area much straighter and thus swifter. 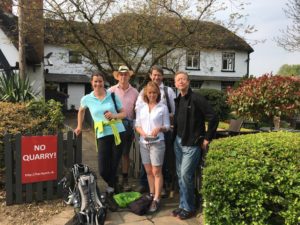 Views across the fields were wide and open, with even Didcot Power Station looking attractive in the distance. 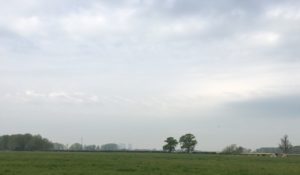 Didcot in the distance

At Culham there is another cut, first created in the middle ages by monks. It enabled stone from the old abbey to be transported more easily towards London, for use in building new houses. The cut does mean that the path bypasses Sutton Courtenay, unfortunately. It’s a picturesque village with more than its fair share of pubs. Ah well. On to Abingdon then, where we know there to be an equally good number of hostelries and several of them on the river front. 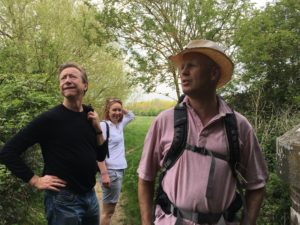 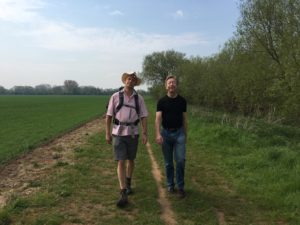 Dressed for walking .. or Stringfellows 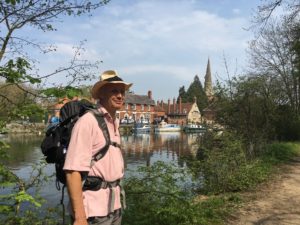 The church you can see in the distance, beyond the fetching chap in the hat,  is St Helen’s and dates to the 11th century. But it is by no means the earliest building that was erected in Abingdon, one of England’s oldest towns. A Benedictine Abbey was founded here in 695 and a few hundred years later, William the Conqueror brought his son, the future Henry 1, to the Abbey to be educated. The town was once an important place on the river but its refusal to embrace the railway culture during the Industrial Revolution, meant that it dwindled in significance. Reading quickly outgrew Abingdon and Jerome K Jerome even described the place as ‘boring’ in his watery tale. 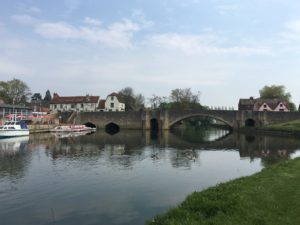 The bridge at Abingdon

The Nag’s Head on Nag’s Island was the chosen watering hole for elevenses. It is an inn that won the Campaign for Real Ale’s best pub award in 2014. As I was casting about for someone to take a photo of our group, Nick had the cunning idea that I could ask one of the wait-staff .. after all, they did have CAMRA written across their backs! Sadly, the wait-person I chose spoke not a word of English and just got redder in the face, the more I tried and failed to explain the humour of the situation. 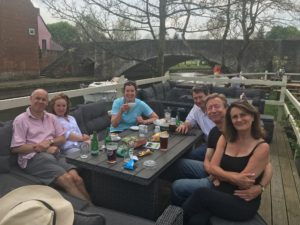 Coffee and Guinness at the Nag’s Head, Abingdon

Having plotted our lunch stop we continued on the walk, with fields and the occasional copse of trees along the way. In one of the small ponds we came across a motorbike, which looked to have parted company with its owner quite recently. Quite by chance, a few hundred metres on we passed a helmet .. but of the cycling variety, so totally unconnected in fact. 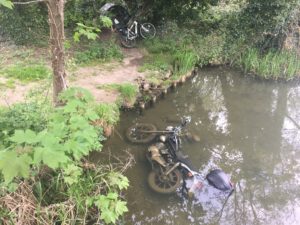 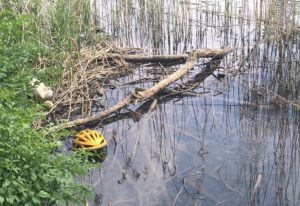 500m upstream a helmet to go with the bike

The day had become really quite hot by now and we were glad to reach Sandford and meet up with Mandy and Tony, patiently waiting at the King’s Arms. As tradition would have it on this walk, the rain also waited its turn until the food arrived, before falling in torrents. 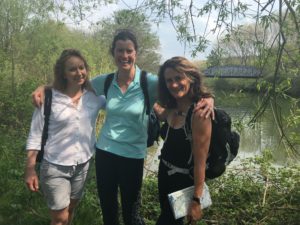 The girls .. Me with Joanna and Kate 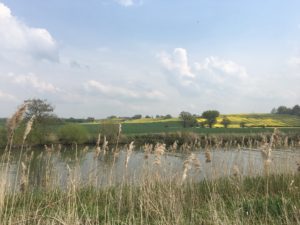 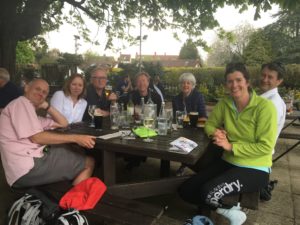 Lunch at Sandford before the rain .. 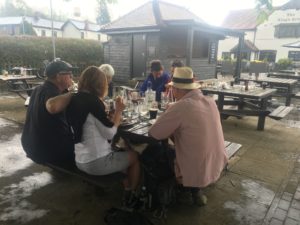 .. and during the rain

With the rain and the Guinness flowing with great ease, we managed to delve into all manner of trivia, including the extraordinary versatility of the selfie stick .. sadly, I can’t remember a single use for them now, other than the obvious. While the punter on the next table looked to have had more than his fair share of pints, I’m sure he was thinking much the same about us. 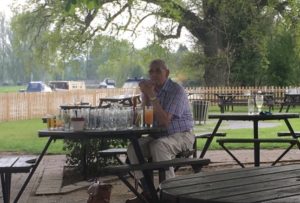 Chap with a drinking problem on the adjacent table

Feeling a little unsteady on our feet we continued northwards for the final three miles of the day to Oxford. Fiddler’s Elbow and then Iffley Lock are next up on the landmarks. But before we reach them we pass by a kissing-gate which is decorated with metallic fish. There is no plaque beside it explaining who the sculptor is. Shame, as it’s really rather beautiful. 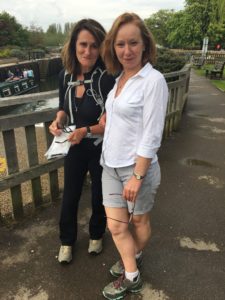 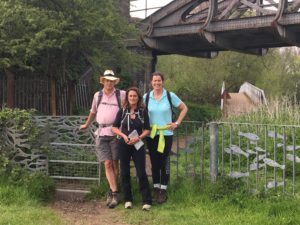 Iffley Lock was the site of the first ‘pound’ lock on the Thames. It was built in 1631 and was a forerunner of all the locks on the river. Around Iffley to upstream of Oxford, the Thames is often locally referred to as the Isis. There are many theories as to how this came about. My favourite is that students renamed it as a reference to Isis, the perfect mother of the ancient Egyptians, thus implying that the river is the perfect mother of their university. 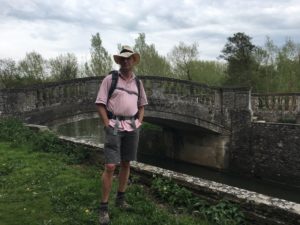 Before long we are in familiar territory .. the Oxford college boathouses. For some of us there are memories of cracking the ice in the early hours, to begin training. For others the towpath is familiar for the time spent yelling at crews to row harder. And for the rest of us there are mixed but mostly fab memories of a misspent youth, consuming way too many glasses of Pimms during Eights Week. 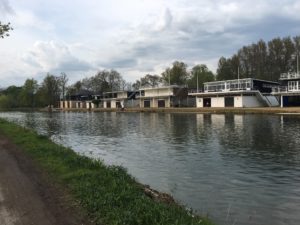 Boathouses for the dark blues 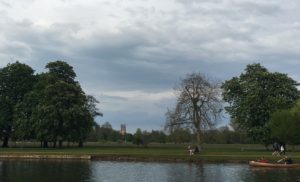 Magdalene tower across the meadows

For old time’s sake, we follow the beckoning calls of ‘The Head of the River’ at the end of the walk and have a final snorkel-juice, before heading to hotels to take baths before dinner. 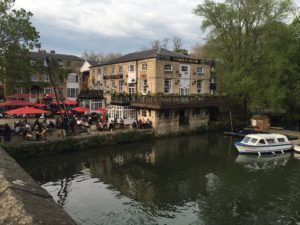 Head of the River

After a quick turn-around, we reassembled at The Cherwell Boathouse for a very smart supper on the river .. the Cherwell this time though, rather than the Thames. Liz and Mr Light joined us for the evening and we had a spectacular time, with delicious food, fabulous wine and the best of company. A very fitting end to the day. Of course, there was lots of frivolity too .. what else could you expect from the assembled company .. way too much texting at the dinner table, near fatal boa attacks and a word game of asinine silliness. 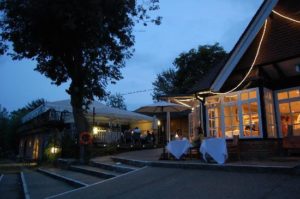 Cherwell Boahouse on the Cherwell for dinner 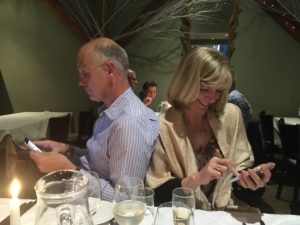 Texting at dinner .. how wude! 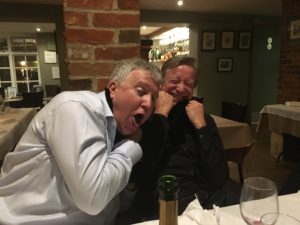 Attack of the black feather boa

Dog of the day could be no other than the Finneran’s Sassie. At 12 weeks she came in at the youngest winner but probably also the largest! 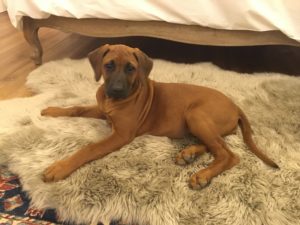 Sassie .. the cutest Rhodesian Ridgeback you ever did see