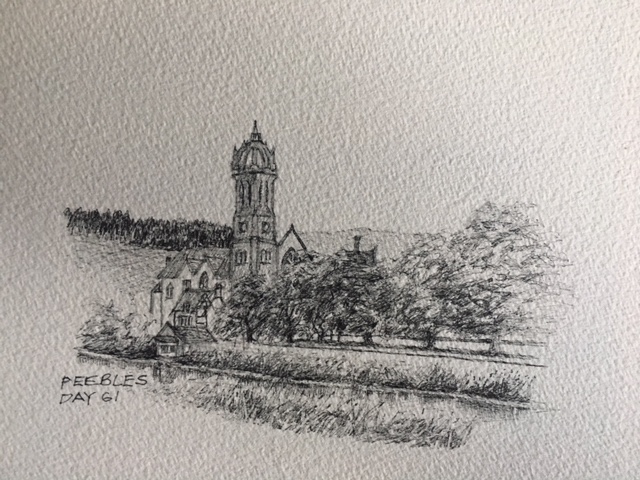 It was a leisurely stroll of 7 miles this morning, to take us from the very comfortable Traquair House to the small town of Peebles. My husband suggested, from afar, that to make up for the short distance, we should push Tigger and Ilse’s car to Peebles. Ha ha.

Breakfast was a very civilised affair, sitting among the Meissen and Limoges, with family portraits from centuries past looking piously down upon us. Out of the window we overlooked the maze .. it would have been easy to direct lost maze walkers from this vantage point.  Traquair House has a very interesting history and I should love to return, with ample time to explore the house, walk around the gardens and sample the wares of the brewery. As we walked out of the front gate we noticed a couple of day-trippers looking curiously at Tigger .. I think they thought he was the Laird! 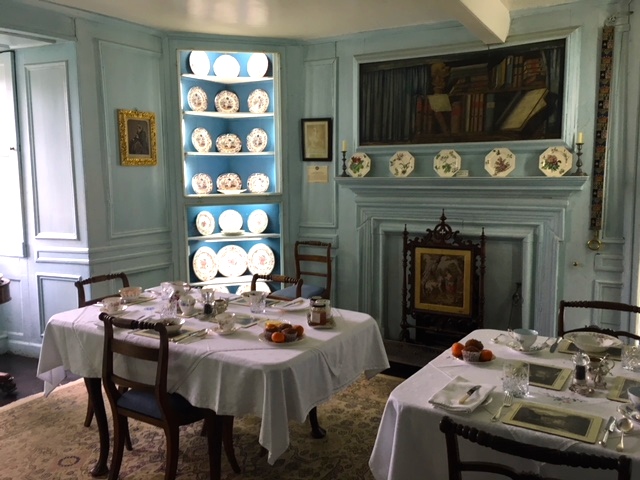 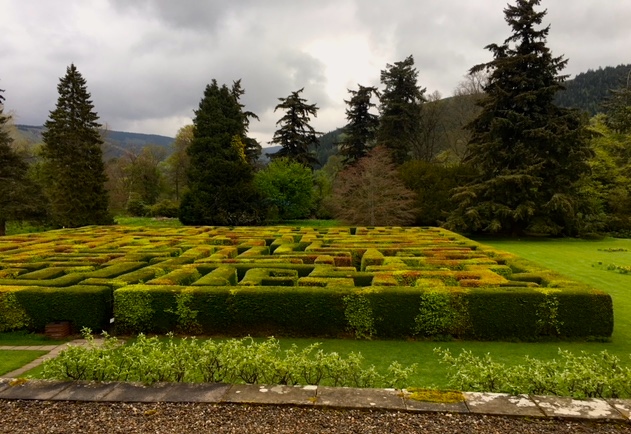 Vantage point of the maze 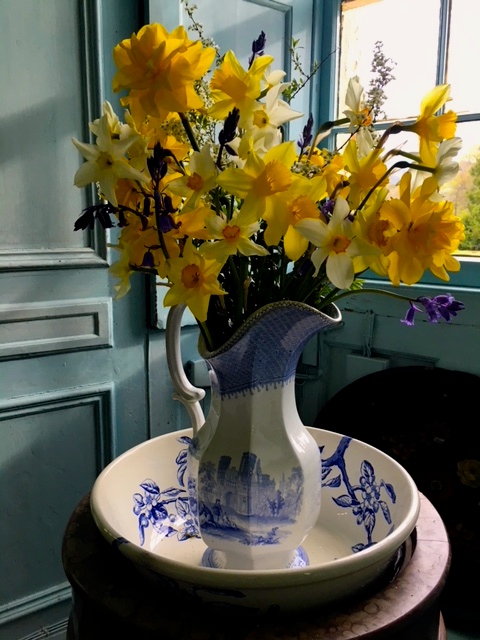 Fresh flowers everywhere in the house

The walk followed the gently winding River Tweed using the route of a disused railway track. Once again there were people fishing .. for greyling and trout today. All along the way there were reminders of when the train service was still going strong .. sheds for the engines, remnants of a dismantled bridge lying on the riverbed, the site where once a halt was built and an old station. 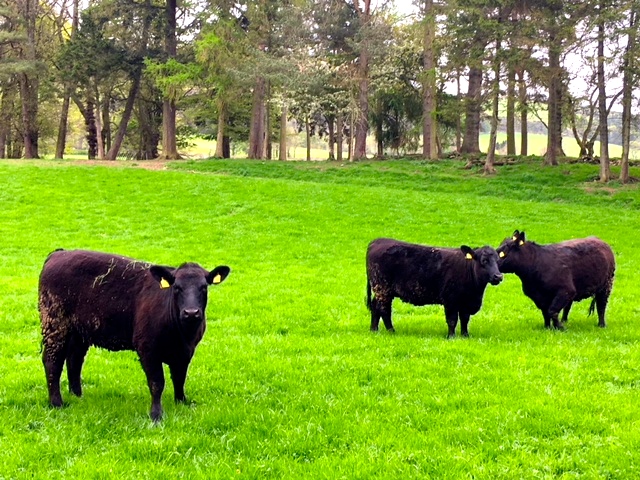 Verdant grass along the way

The route took us via the little settlement of Cardrona. There’s a beautiful ski resort in the south island of New Zealand by the same name and I imagined this was the inspiration for the name, as so many Scots left their homeland for the Antipodes. However, it turns out that the Scottish farmer, philanthropist and entrepreneur Tom Renwick, actually built the greater part of the ‘community village’ as recently as 1999. It certainly had a look of an upmarket Port Sunlight, the village created by the Quaker Lord Sunlight, close to Liverpool.

On the edge of the village we came across the old railway station which has been converted into a delightfully quirky little cafe, called Naffy’s. It serves a terrific cup of coffee. 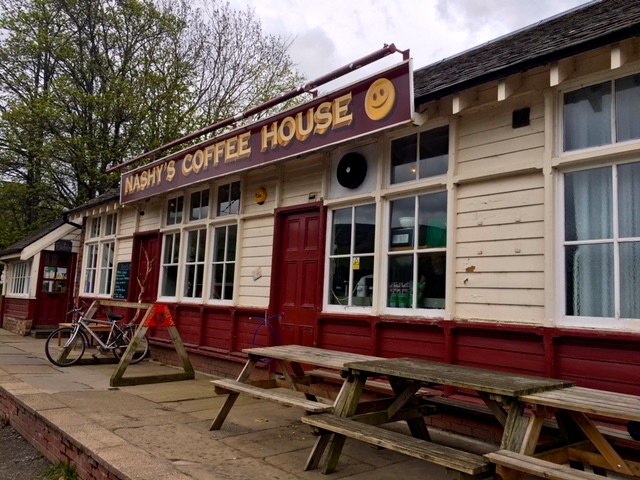 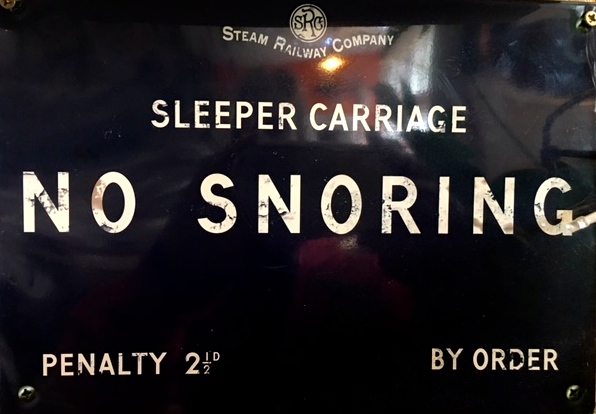 Paraphernalia from the station around the cafe

Not dissimilar to the ‘practice stiles’ that I’ve come across along the way, today found us several ‘practice podiums’ for use should we ever win an Olympic medal. I suspect they were originally something to do with the train service but if you have a better idea please do let me know. 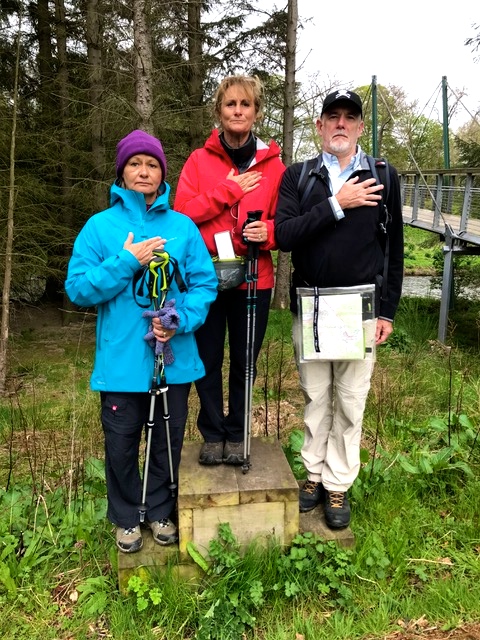 Something I would have walked straight past had I been on my own, were the old posts for barbed wire fencing. Tigger pointed them out. You just need a winch to tighten the lines of wire between the posts. That way you can avoid gouging your fingers. Quite ingenious and quite beautiful too. 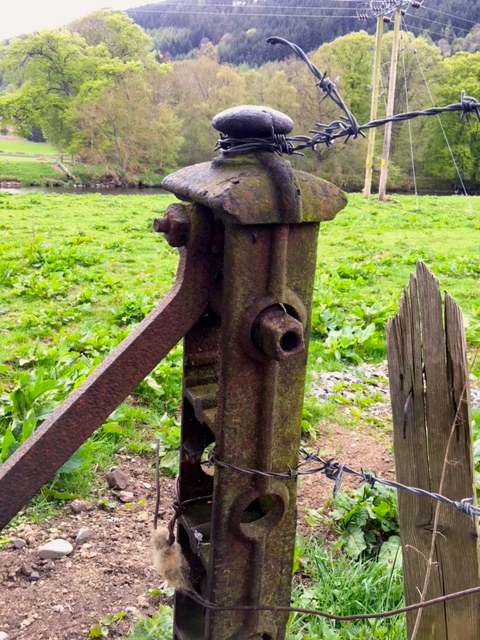 Peebles is nestled in an area of outstanding beauty and straddles the River Tweed. It’s a market town and exceptionally pretty. Its name means ‘a place where tents are pitched’. It was clear as we walked down the high street that this is a town with character. Indeed, it’s ranked as the top Independent Retailing Town in Scotland, and second in the UK .. with virtually no shops belonging to a chain.

It’s not so much the shops I’m interested in though. Peebles has a tiny museum dedicated to John Buchan, the author of one of my favourite books, which was made into one of my favourite films. ‘The Thirty-Nine Steps’ was a spy thriller set between the wars, starring the dashing South African protagonist, Richard Hannay. Hitchcock saw the value in the book first and most recently the Spooks actor, Rupert Penry Jones, starred in the third remake. But the best version by a country mile was the one made starring Robert Powell and John Mills in 1978. I could watch it over and over again .. and in fact have done. Give yourself a treat and buy a second-hand cd from Amazon. Settle down with a box of maltesers and enjoy! You won’t be disappointed.

Black Dog Tails
Jet was the amazing black dog who ever quick on his paws, pushed the pram out of the way of an out of control car, saving the baby asleep inside. 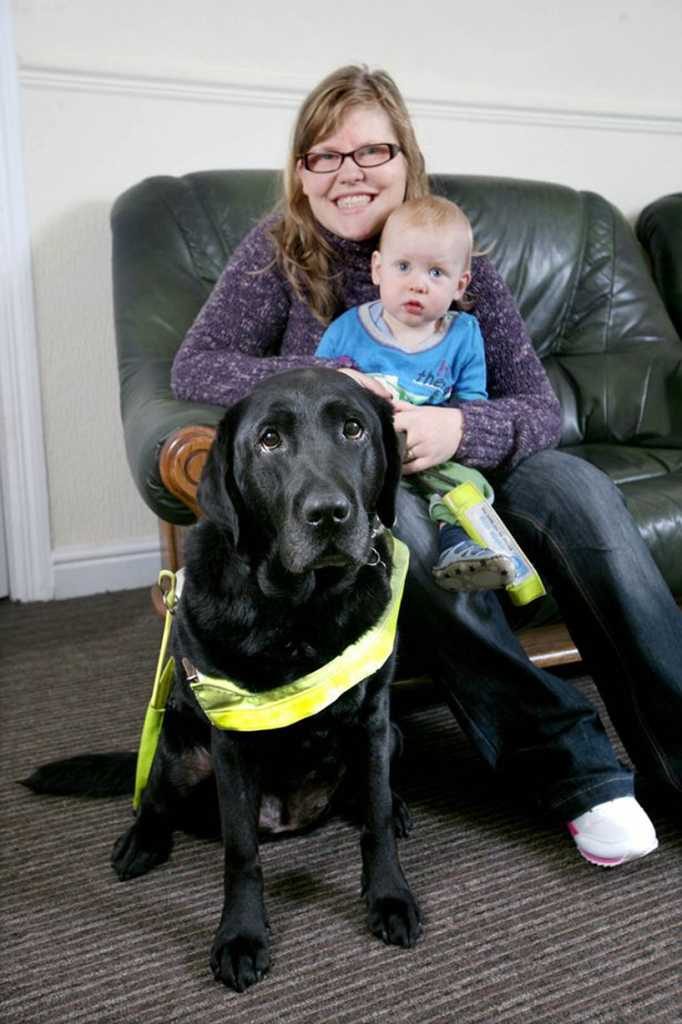