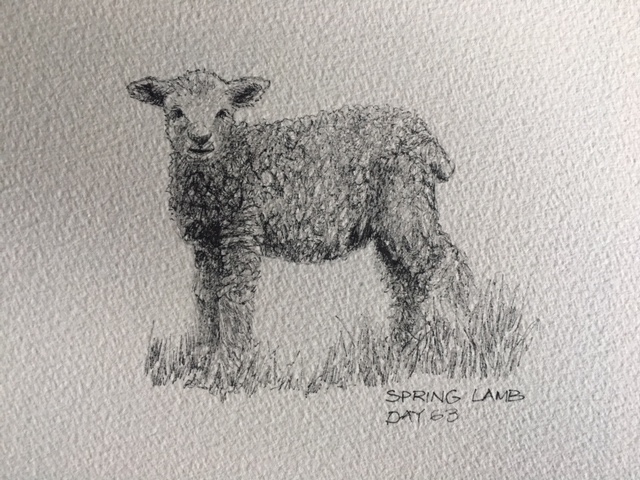 My rest day really delivered yesterday. Great physio massage to work out the knots in the legs, a visit to the hairdresser to tame the hobbit hair, a deep afternoon nap to banish my cold and then an evening of terrific food and revelry to cap it all off.

Peebles’ independent nature shone through as we window-shopped our way to The Prince of India for dinner. I was delighted to come across the Daft Dug, even if I couldn’t work out why this was a good name for a hair salon. 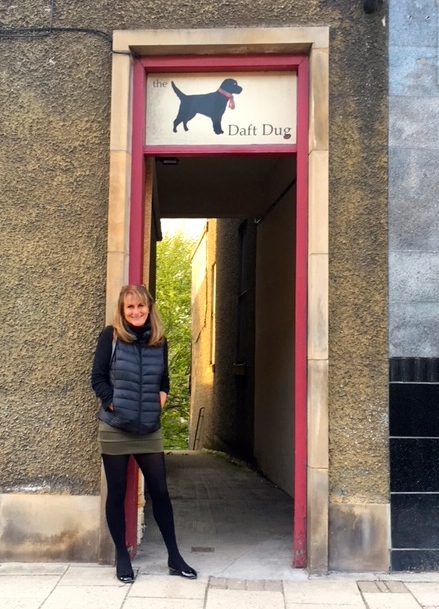 A black dog find in Peebles 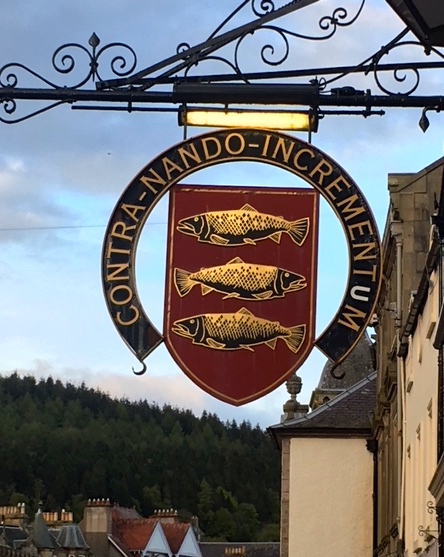 View up the street

The pub next door to our hotel had a fabulous sign hanging outside. It showed three salmon on a red field, the coat of arms for Peebles, and the insignia ‘Contra Nando Incrementum’, which Tigger had no hesitation in translating as ‘Increasingly resisting takeaway chicken’.  In actual fact it means ‘There is growth by swimming against the stream’, referring to the annual migration of salmon up the River Tweed in order to breed. The one salmon facing forwards and two facing backwards represent the fact that for every salmon that goes up the river, two come back to the sea. Neat.

Close by was the only gold postbox I’ve seen along my journey from Cornwall. Any village, town or city which was home to a gold medalist in the 2012 London Olympics, had their postbox repainted gold in recognition of the winner. In Peebles the athlete celebrated was Scott Brash, who won his medal by being on the Equestrian Jumping Team. Ironically the postbox was half on and half off the pavement – this seemed appropriate for an equestrian.

And then we reached the pub, The Bridge Inn. It was a heart-warming hostelry with excellent beer and a group of eight local musicians, enthusiastically jamming folk songs in the corner. The ‘dogs welcome in pubs’ policy was clearly embraced with alacrity and we had a great conversation with the owners of two of the sleekest, most adorable labs. 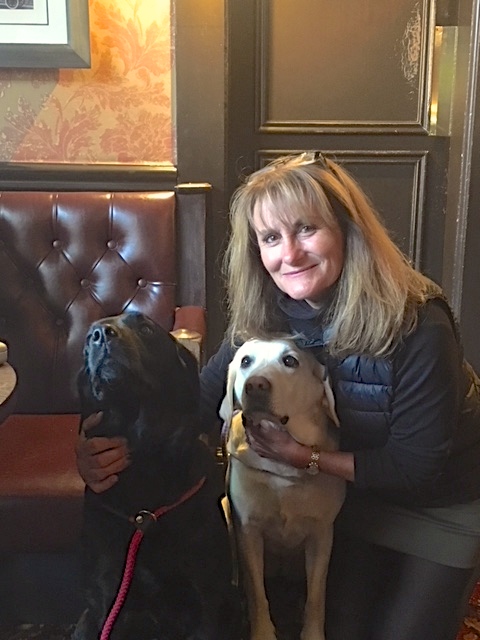 Gorgeous labs reminding me of Rover and Chuckles 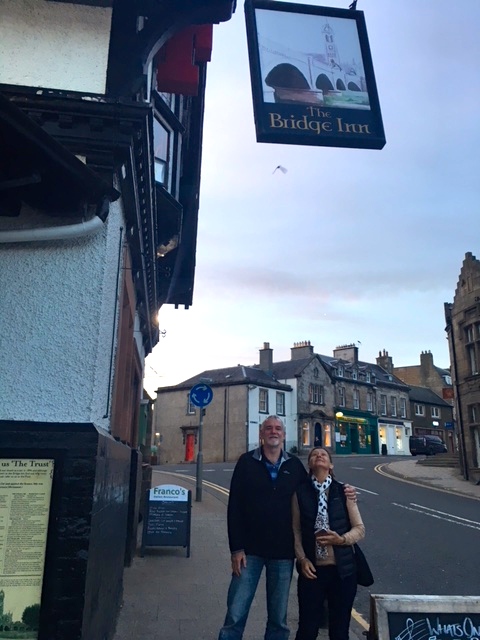 Appreciative looks at The Bridge Inn

Today started in the more than excellent butcher/baker combination of Forsyths of Peebles. Having met a delightful couple in the again excellent Bridge Inn last night, complete with the softest pair of labradors, Jules found herself the focus of near-paparazzi fame. Carol, of Carol’s Creations and  owner of the labs, had posted Jules’ sojourn on Faceplant, and her Walking The Black Dog flag was immediately recognised in the butchers. End result: the price our lunch was very generously donated to the cause. Visit Forsyths if you are in Peebles! https://forsythsofpeebles.co.uk/ 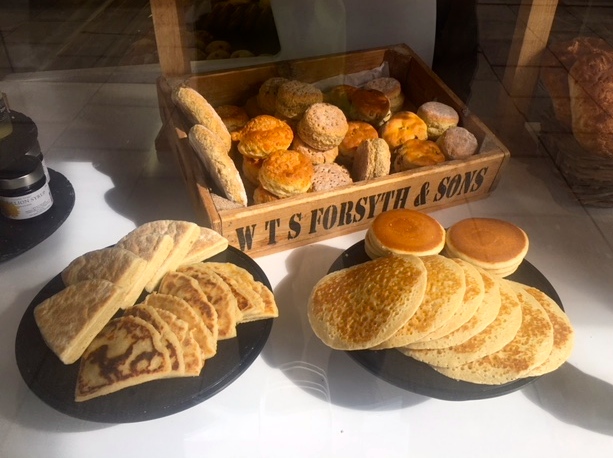 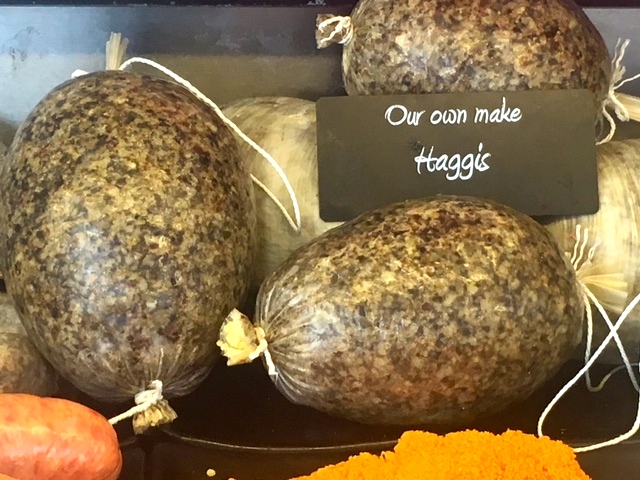 Buoyed by vicarious fame, we headed northwest on the Cross-Border Drove Road into the hills. The hills! Like, going up stuff! A bit of a jolt after drifting along a repurposed railway line during our last walking day. But the views more than made up for the effort .. as well as the gallooping roe deer we saw from a distance. Glorious! Why have we not been here before? The Scottish Borders really are stunning and the people are just delightful. 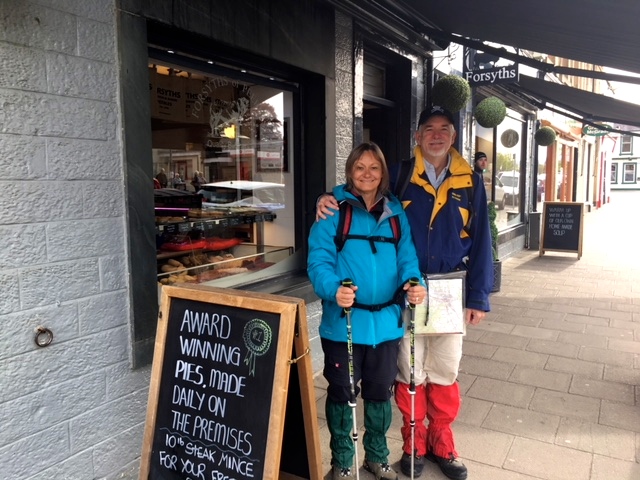 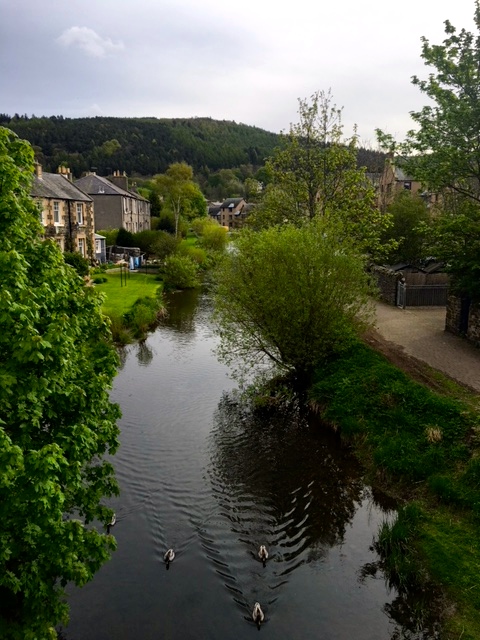 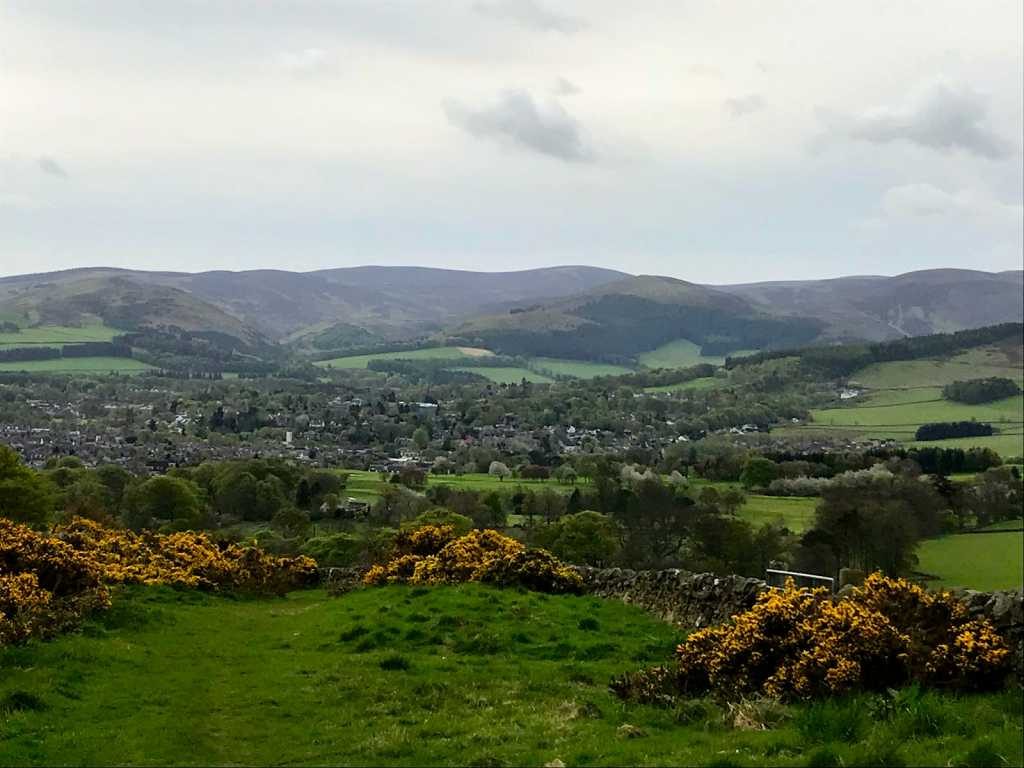 Looking back over Peebles

Along the way we met many of the foci of Jules’ interest on this trip, namely sheep. And lambs. Squillions of them. No major surprise, having been forewarned by Nick, but Jules’ excitement for these fluffy beasties seems to have no bounds. Many of the lambs have big red numbers written on their flanks. My suggestion that these referred to the numbers on the Indian takeaway menu did not go down terribly well. Can’t think why. 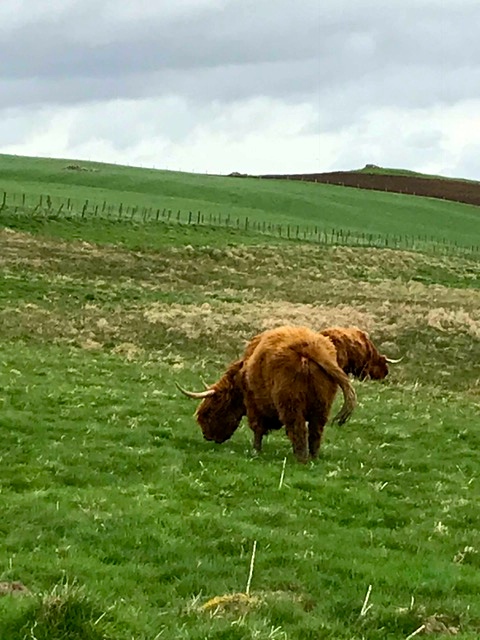 No sheep photos today .. just the back end of the Gruffalo

Another fascinating fact, along with the encyclopaedic volume already supplied by Jules in her blog, is that Jules has left and right-handed walking poles. You may find this difficult to fathom, as they seem identical. If so, you’re right, as it is unfathomable. The closest we got to a solution is that the adjustment lever should be on the outside so that it doesn’t catch on clothing etc., resulting in an embarrassing collapse at a crucial moment. We’ll leave this one with you to work through. 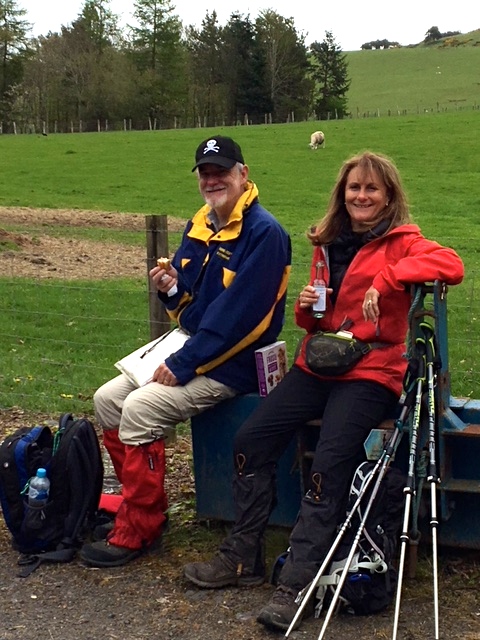 We also learned that Jules’ staying power is impressive. She complains that she hasn’t lost any weight on this trip, but she put us in the shade when it came to simply plodding on. Go Jules! More power to your elbow. Or some other more appropriate piece of anatomy for a walking trip.

Enough fatuous drivel – here is your captain and leader back again…

Thank you .. I think, Tigger! But here I have a photo of him and Ilse, striding out in their not-to-be-missed gaiters, ahead of me. The Drovers’ path took us through a couple of pine forests. I suspect this must have been a rerouting of the original trail or the trees have since been planted .. otherwise, can you imagine the mayhem as sheep ran hither and thither through the trees. 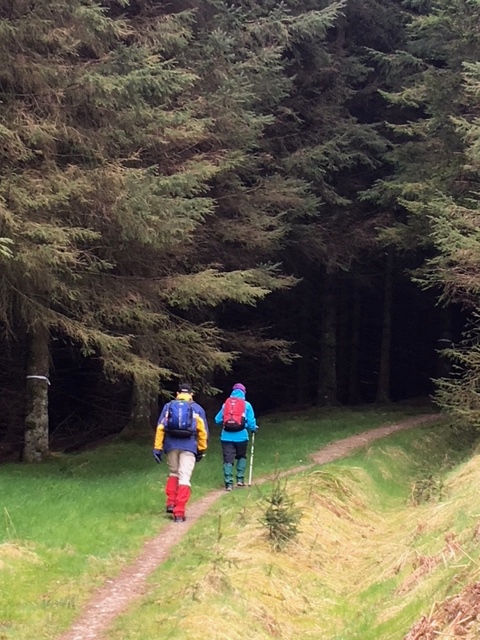 Into the deep, dark forest 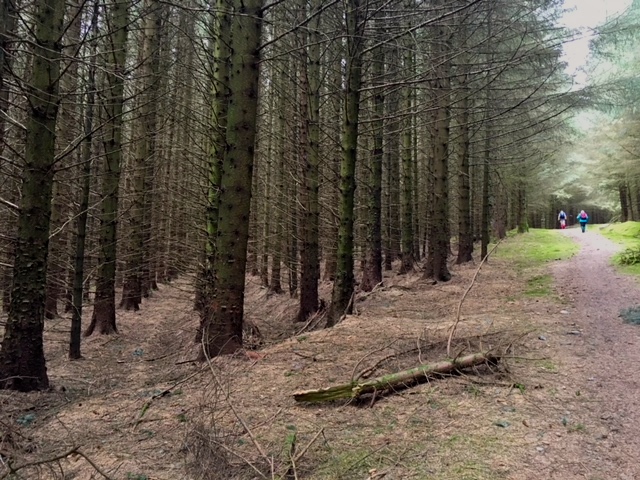 Perfect hide and seek territory for sheep, not wanting to go to market

In contrast to the forests there was a lot of open ground too, with little other than the ubiquitous sheep and gentle Highland cattle to punctuate it. There were patches of farmland too, where we came across a farmer ploughing his field at a vertiginous angle, with clouds of gulls in his wake. 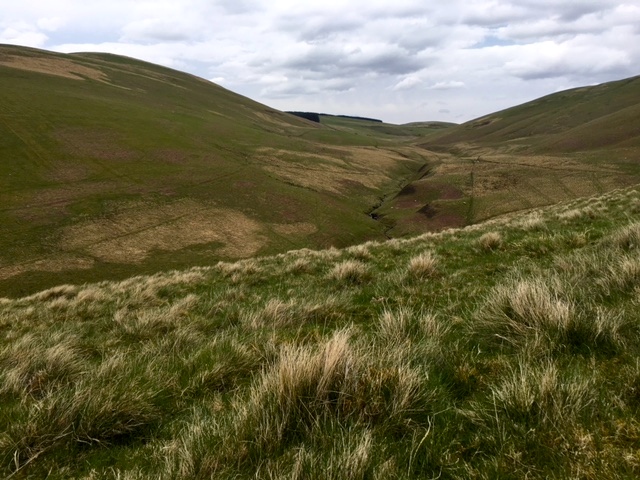 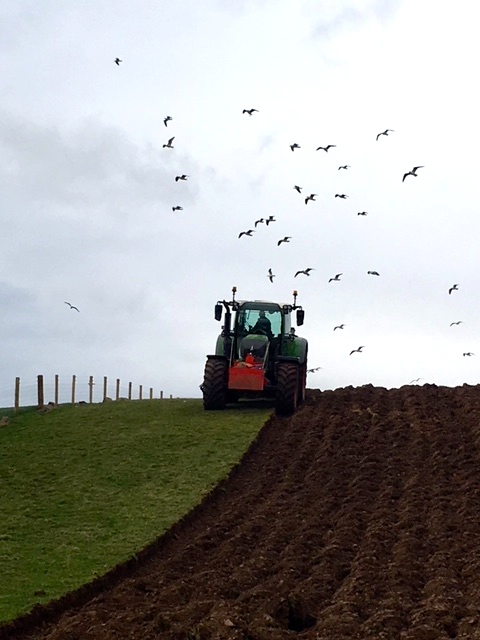 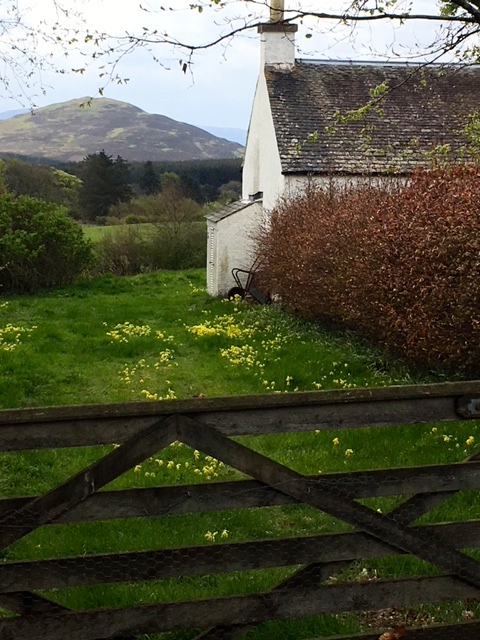 The occasional farm building .. this one with pretty cowslips .. 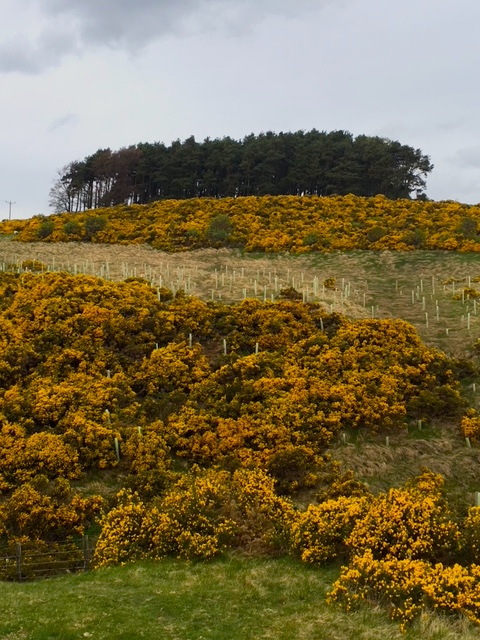 .. and plenty of gorse

The route eventually took us through the hamlet of Romannobridge, unremarkable unless you happen to know about the wintry thriller that the author Andrew Greig set in the place: ‘A rugby-playing half-Maori named Leo Nagotoa stands in the sleet by Romanno Bridge in the Scottish Borders, trying to thumb a lift when his Destiny slithers up alongside him.’  It reminds me of a parlour game we play whenever we get together with friends of ours .. you have to compose what you think is the opening sentence of the book that someone else around the table has chosen. ‘A rugby-playing half-Maori ..’, would be a winning suggestion!

The rest of the day was pretty unremarkable (bar the company of course), with Destiny slithering at our sides until we reached West Linton.

Black Dog Tails
Meet the adorable Anya, another of the Kiwi guidedogs who works for the Blind Foundation. 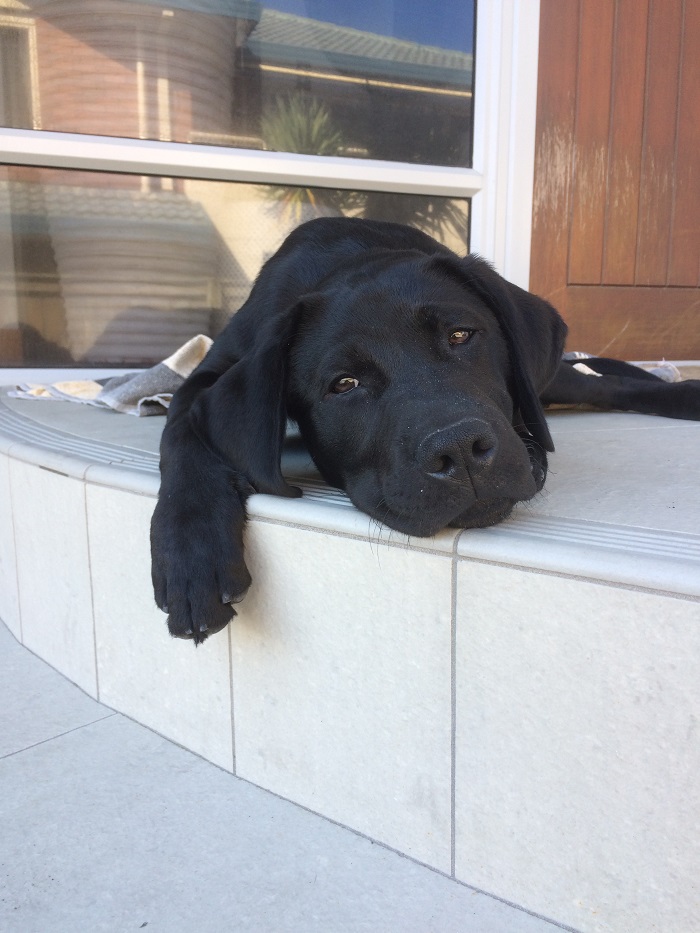