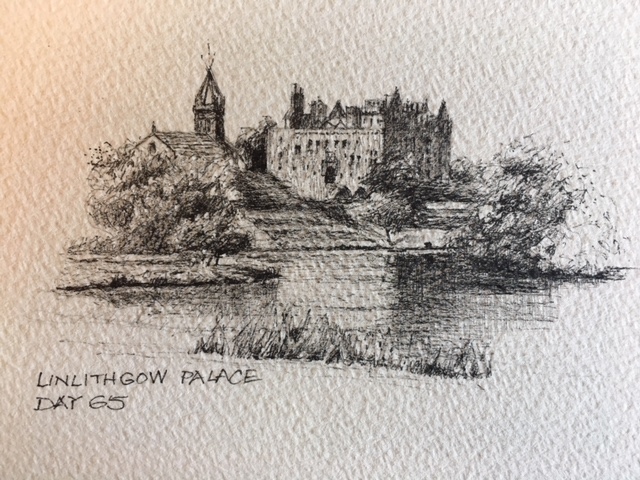 I didn’t have great expectations for this morning’s walk. In order to hook up with the Union Canal, I needed to walk along a B road for several miles and wrongly assumed it would be dull. It was a busy road but there was plenty of interest along the way. The village of Ecclesmachan was an unexpected treat. Ecclesmachan means Church of St Machan and in the graveyard of the church I found several beautifully carved headstones. The lighting wasn’t the best but here are a couple to give you a flavour .. 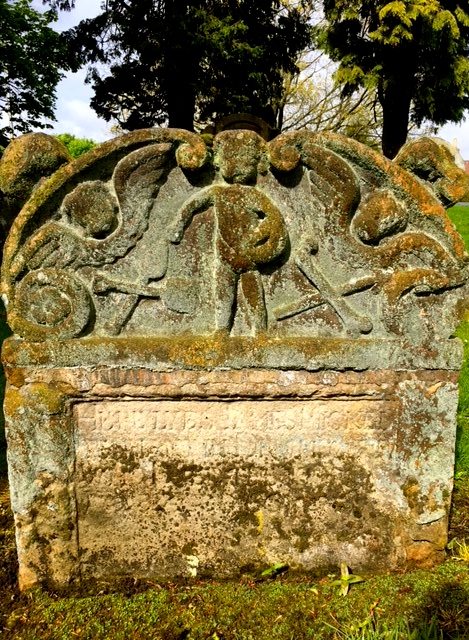 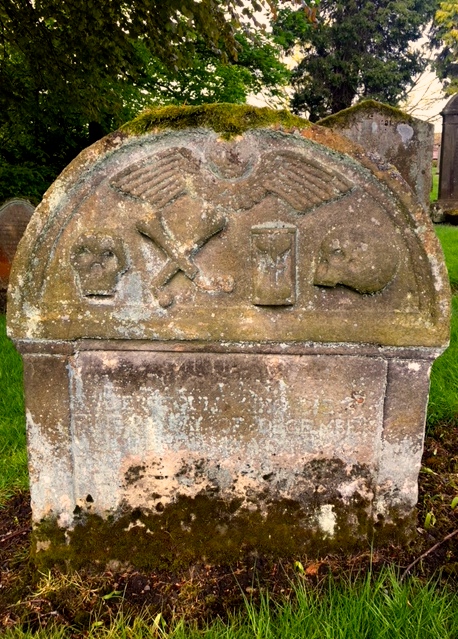 A winged soul above two skulls, crossed bones and an hour-glass .. once again reminding the viewer that life is all too brief 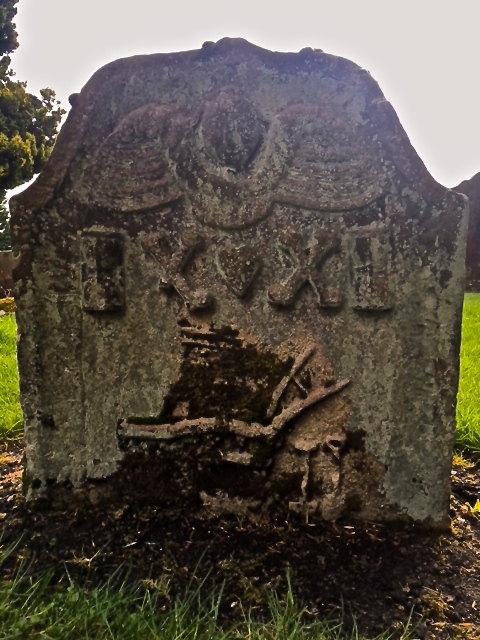 More crossed bones, hour glasses, a heart and skulls but this time with the carving of a plough beneath .. the grave of a farmer. 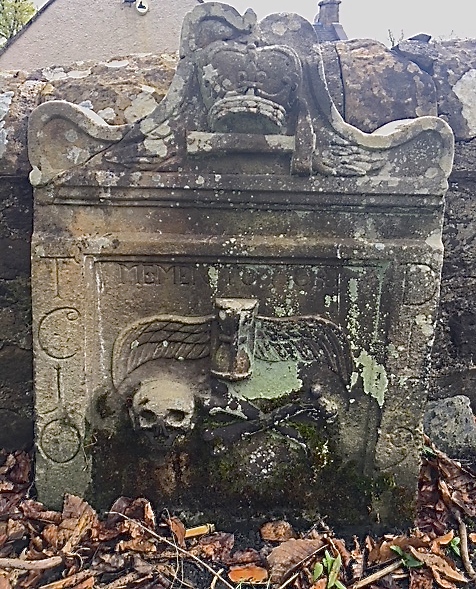 The gravestone above was particularly interesting. The skull and crossed bones remind that death comes to everyone, as indicated by the words written on the stone: ‘Memento Mori’, meaning, ‘Remember that you must die’. There’s also a rare winged hourglass, signifying that life both trickles and flies.

And my favourite, beautifully designed and carved Victorian stone was one dedicated to Revd George D Shepherd, who died at the tender age of 26 in 1899. It read: ‘A brilliant student, an ardent and unselfish Christian, already promoting his missions brightening human lives and modestly leading others … Erected by relatives and neighbours in loving remembrance of his beautiful life’. 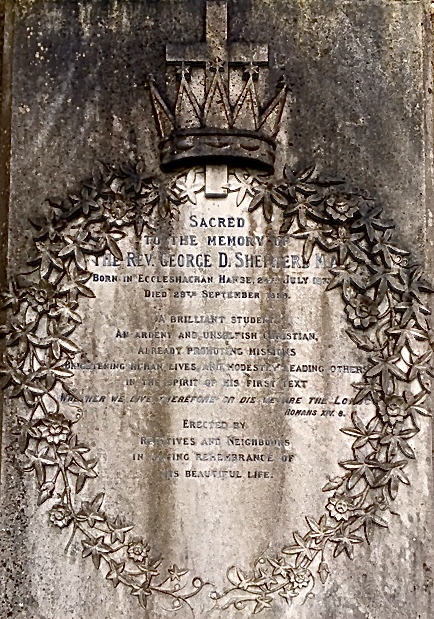 Ecclesmachan’s other claim to fame is the bomb hole just outside the village, created during World War II. The intended target was the Forth Bridge but thankfully it was early on in the war and the Luftwaffe was a little short of target practice.

And moving back into the present, away from the bomb crater and the gravestones, the village had beautiful flowers to enjoy for passersby, such as me. 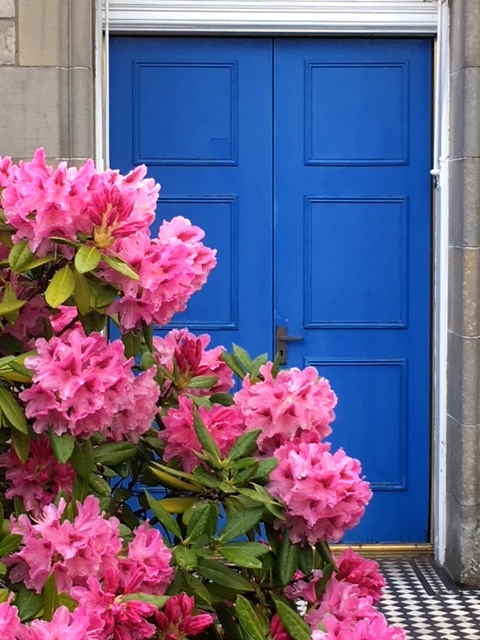 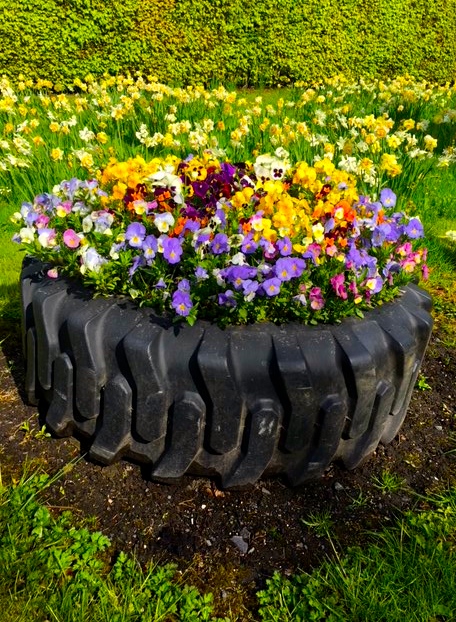 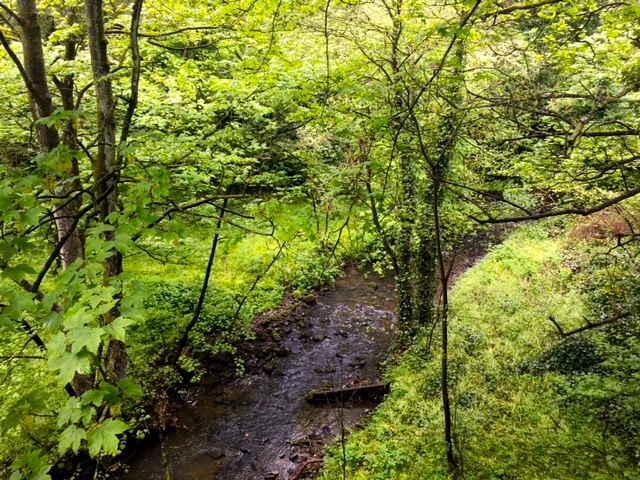 The Union Canal is like many others, in that it enjoyed its heyday in the 19th century but was eclipsed by the advent of the speedier trains. This canal was used to transport mainly coal and lime from Falkirk to Edinburgh. It’s what’s known as a ‘contour canal’, which sticks close to the contour line of the land and avoids costly engineering works, such as tunnels or locks. This gives them their characteristic meandering course and for walkers, a pleasant towpath to follow. 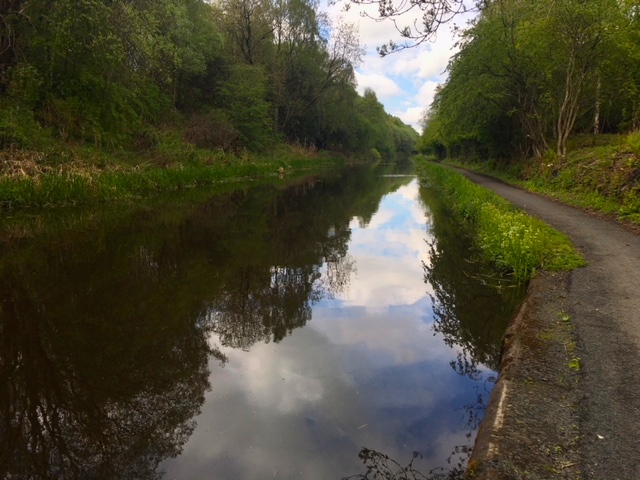 The sun was shining brightly by the time I reached the canal and the reflections were superb. 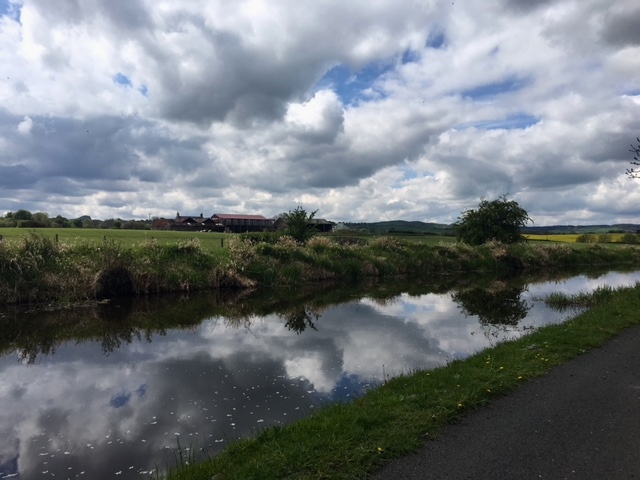 Surprisingly, birdlife along the banks was pretty sparse. At one stage however, I had to give as wide a berth as I possibly could to a male swan .. a cob .. sitting on the towpath, protecting his partner .. the pen .. who was nesting close by. Walking past was a pretty hissy affair. 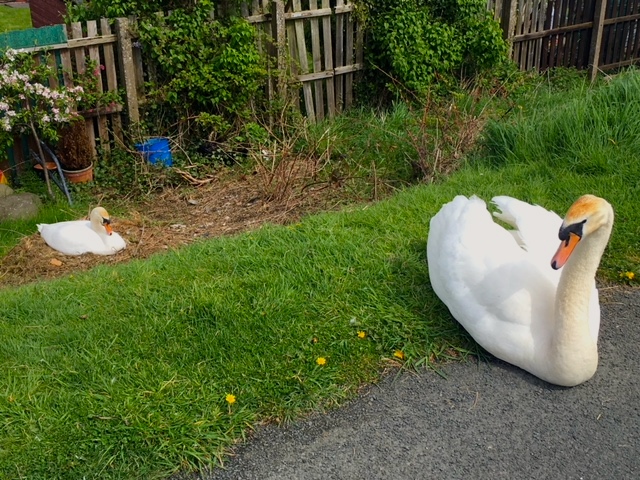 Soon to be parents 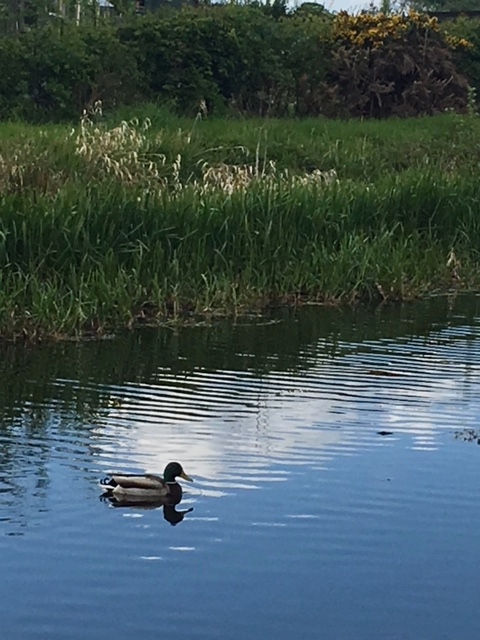 There was the odd duck and boat but apart from that the star turn was the water itself and the reflections. 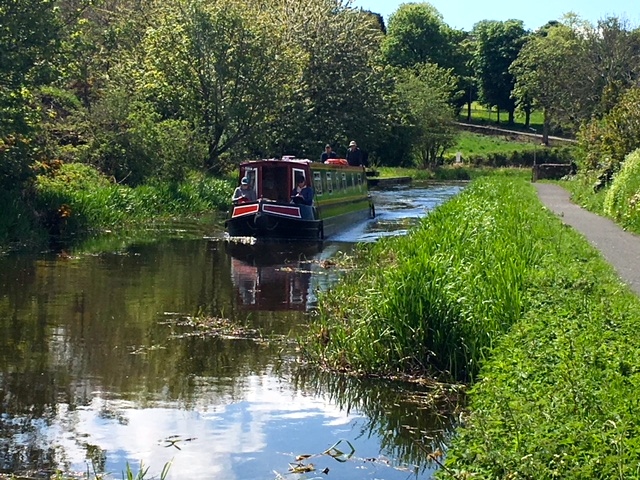 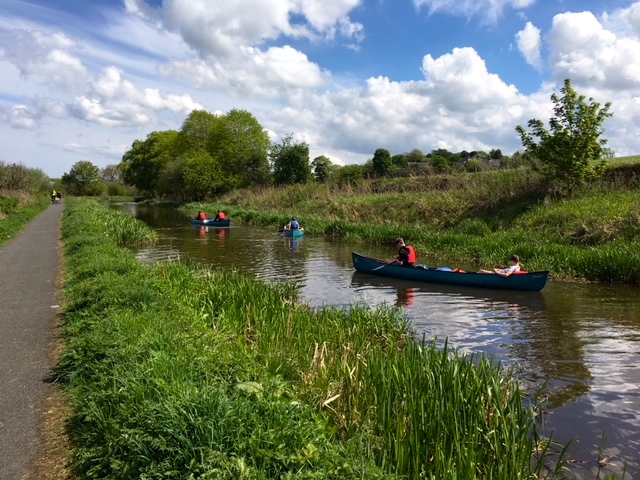 .. and the occasional screen-reading teenagers, seemingly oblivious to the beauty around them!

Linlithgow was my stop for the day. The romantic ruined palace there was the birthplace of Mary Queen of Scots in 1542. Her French mama, Marie de Guise, was not only considered a strong and good leader as her regent but she also introduced the Scots to knickers .. the women, not the men of course (as we all know ‘nothing is worn under the kilt’) and she has continued to make herself felt as a spectre around the palace. 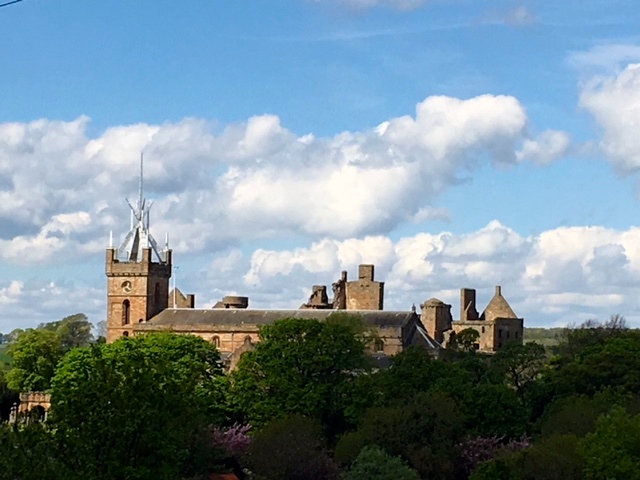 Her daughter, Mary Queen of Scots had a colourful life .. she became queen at 6 days old; survived three marriages; was forced to abdicate in favour of her one year old son, James; spent half her life under arrest in various castles and manor houses around England and finally fell foul of her first cousin once removed, Elizabeth I, who had her head chopped off for allegedly plotting to assassinate her. And her execution was not without drama either. The executioner missed her neck with his first blow and struck the back of her head. The second blow only severed the neck and he was forced to hack through the remaining sinew with his axe. And then, as he held the head aloft declaring, ‘God save the Queen’, the mane of red hair remained in his hand while the head thudded to the floor: the crowd gasped as it was revealed that Mary had been wearing a wig over her very short grey hair. The finale was reached when Mary’s pet dog, a Skye Terrier, emerged from her skirts .. he’d been there the whole time and after the beheading refused to be separated from his mistress. Her body anyway.

The coat of arms for Linlithgow is a testimony to the loyalty of black dogs. It features a female black dog, a black bitch, chained to an oak tree on an island. The story goes that the faithful bitch used to swim out to the island every day to take food to her master, who had been sentenced to starve to death there. When this was discovered she was taken to a different island where she too was chained to a tree and left to die. The townspeople took the animal’s loyalty and bravery as symbolic of their own and even to this day they are known as ‘black bitches’. The local pub named “The Black Bitch” is reputed to be one of Scotland’s oldest pubs. 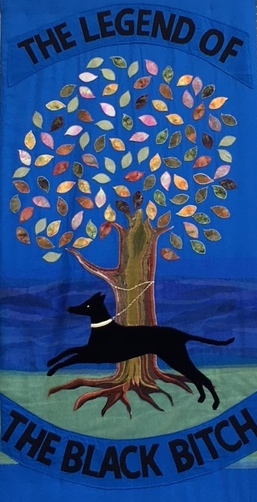 Black Dog Tails
Rufus is making a significant difference in young Christian’s life. Rufus is an Australian Autism Assistance dog. “Rufus gives our son independence. He is able to hold on to Rufus and not run away, giving us security and safety.” said mum Carolyne. Please do tap on the link in the picture to read the whole of Rufus and Christian’s story .. it’s amazing. 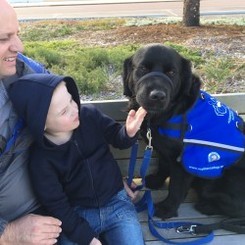