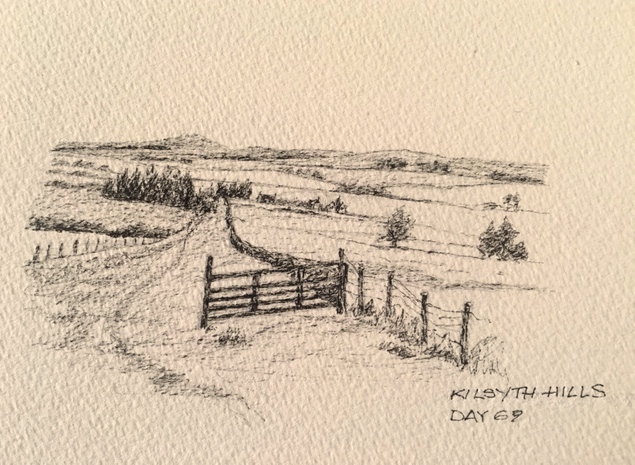 There was more of The John Muir Way today. I have to admit that I hadn’t realised I would be walking quite as much of this coast to coast trail of 134 miles when I first planned my route. I’d really only noticed the canal names on my maps, which the trail shares in part yesterday and today. 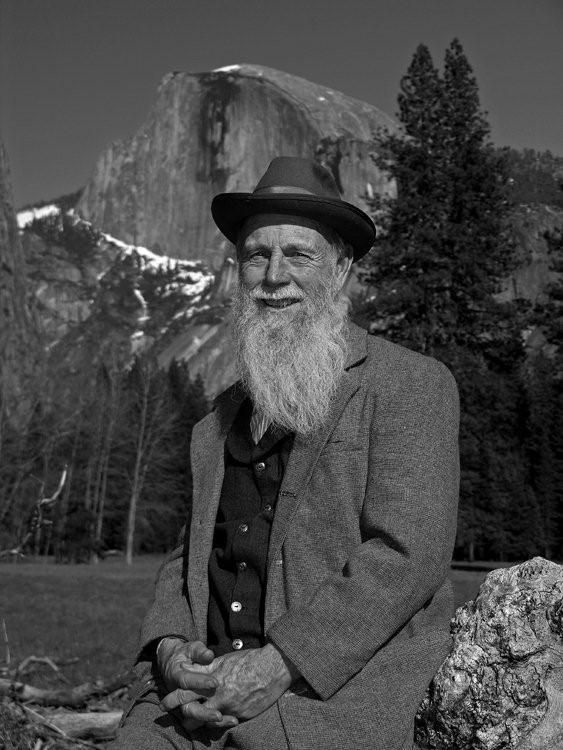 John Muir’s beard in its prime

The trail was properly opened on the centenary of Muir’s death in 2014. He really was quite ahead of his time, being an ecological thinker and conservationist as well as being a political spokesman, a mountaineer, a geologist, a naturalist, a glaciologist and the founder of the hugely popular Sierra Club. He also sported a mighty big beard which I suspect could have won competitions for its luxuriousness.

Along the way there were pretty sights including friendly labradors, swans and ducks .. and even deer. 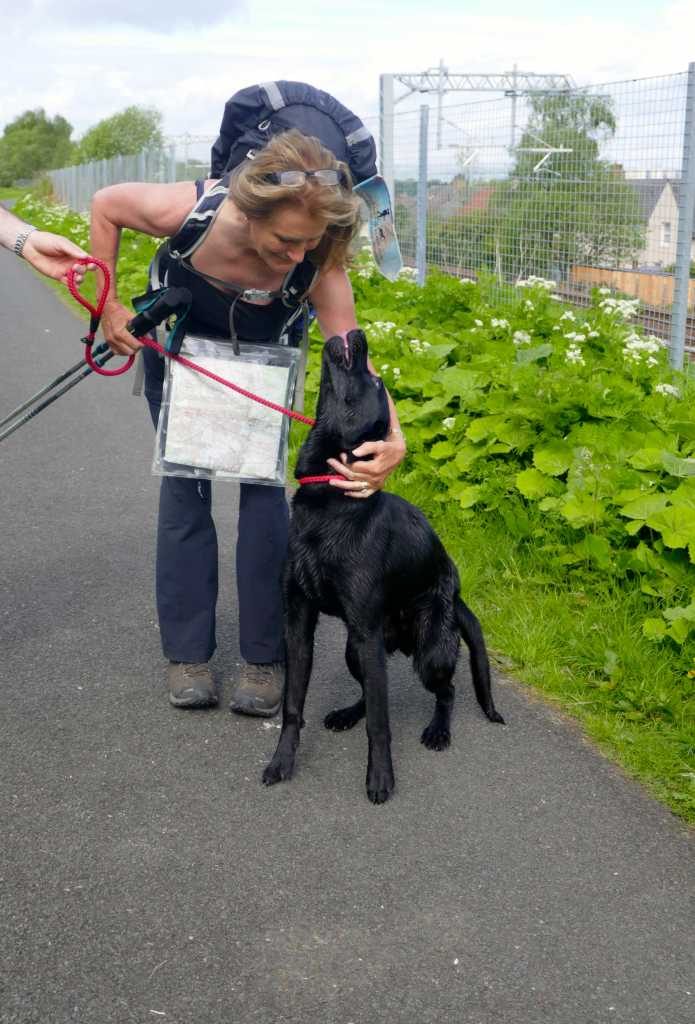 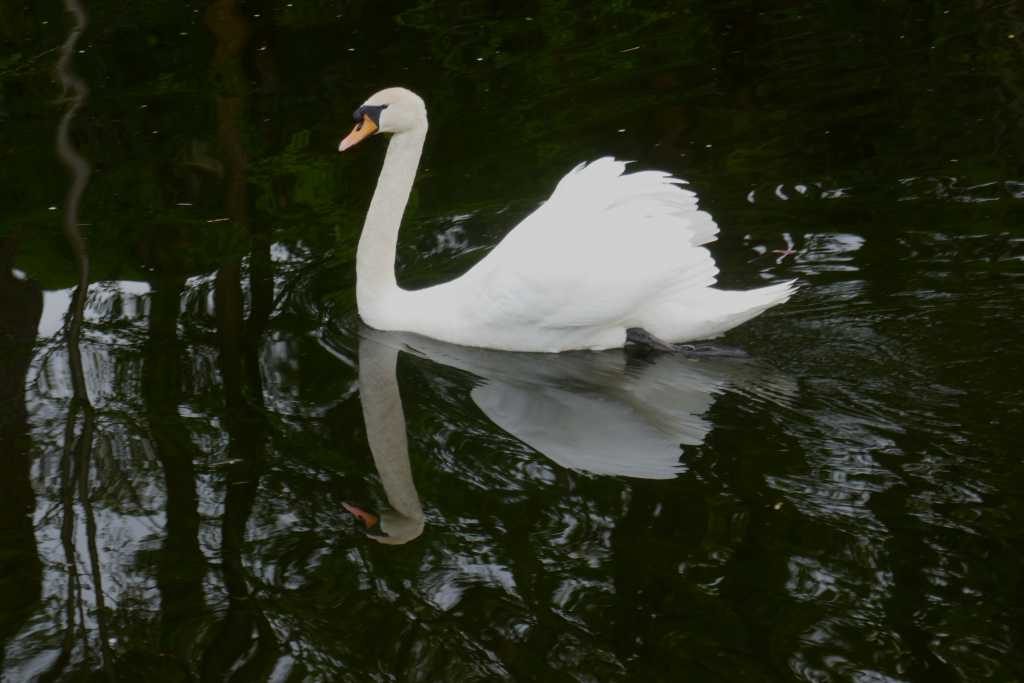 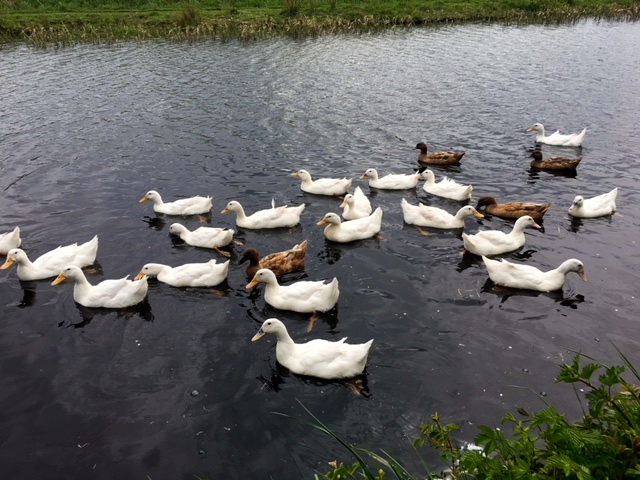 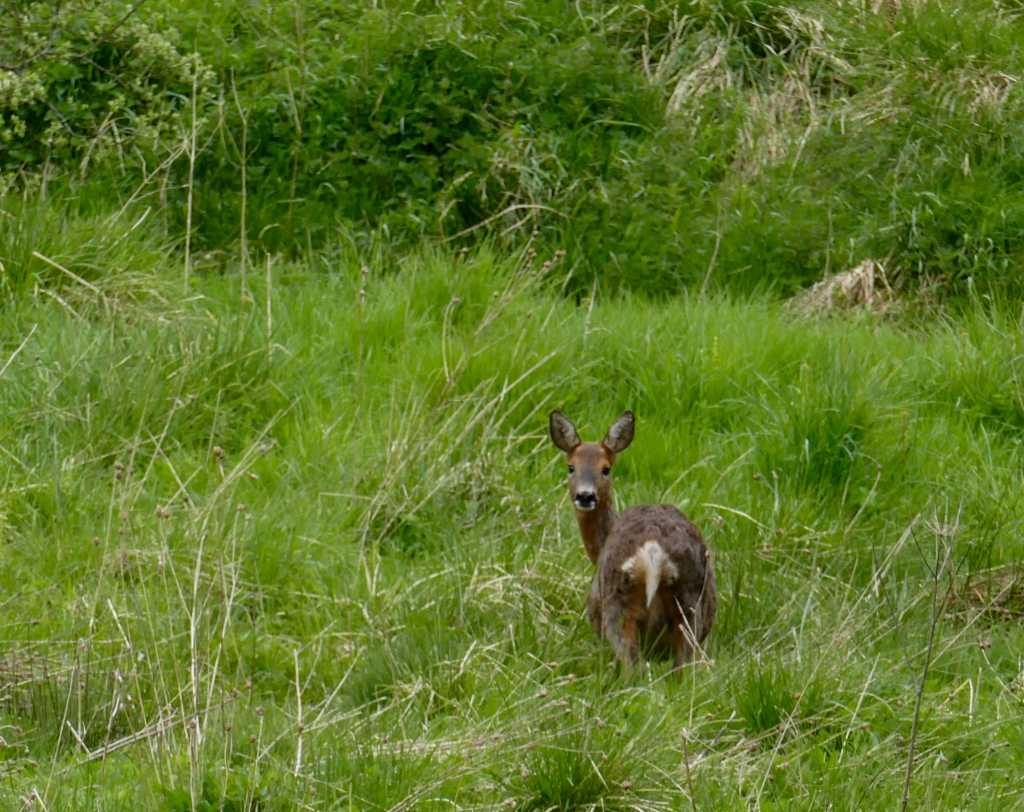 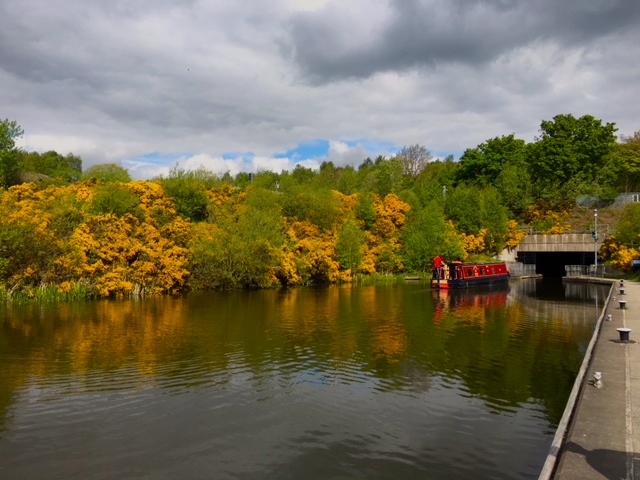 The John Muir Way piggybacking on The Union Canal

Three miles into our walk we came to Scotland’s second most popular tourist attraction. The Falkirk Wheel. It’s the only rotating boat lift in the world. The wheel is a magnificent, mechanical marvel used to connect the Union Canal with the Forth & Clyde Canal which meet at different elevations. It’s the showpiece of the Millennium Link project, which re-established coast to coast navigation by canal across Scotland.

The Wheel was designed to replace a series of eleven lock gates built in the 19th century – long since demolished and replaced by housing. It basically lifts boats from one level to another, from one canal to another. But it’s not just fiendishly clever in what it does, it’s also a thing of great beauty, supposedly inspired by a Celtic double headed spear, a vast turning propeller of a Clydebank built ship, the ribcage of a whale and the spine of a fish. Take your pick. 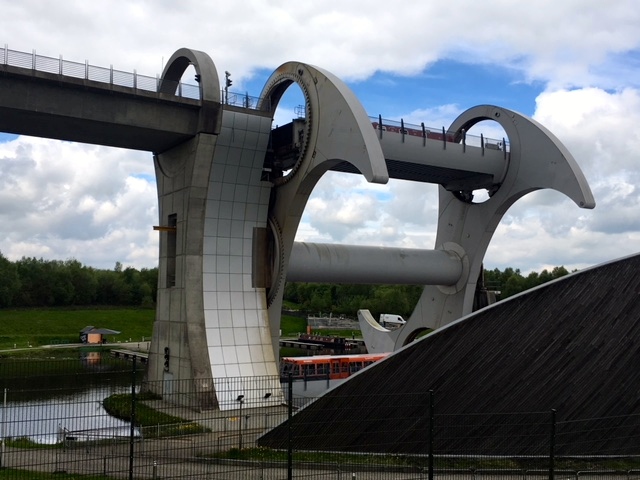 Falkirk Wheel from the side 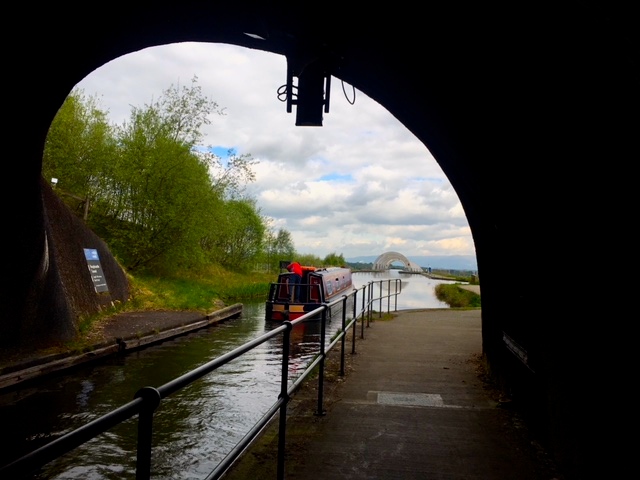 And the engineering beauty of the whole design lies in its Archmidean simplicity. Before I saw it I was confused about how it could cope with the differing sizes and weights of the boats going from one canal to the other; from one level to the other. But because each scoop is filled with water, the displacement keeps the loads balanced. So clever. And for those interested in these sorts of things .. the Wheel only uses 1.5kWh of energy to turn, the same amount as it would take to boil 8 household kettles. Incredible.

I have no idea how to incorporate videos into this blog but the next few photos should give you an idea of how the Wheel works .. 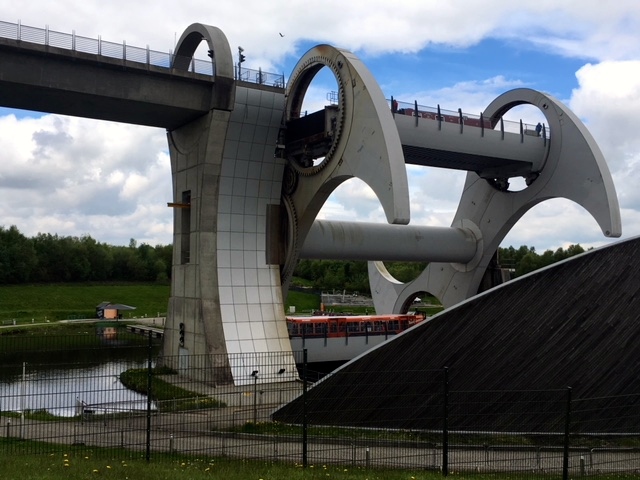 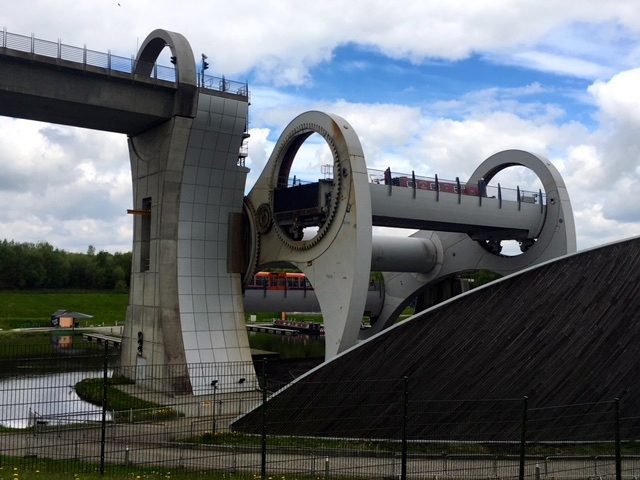 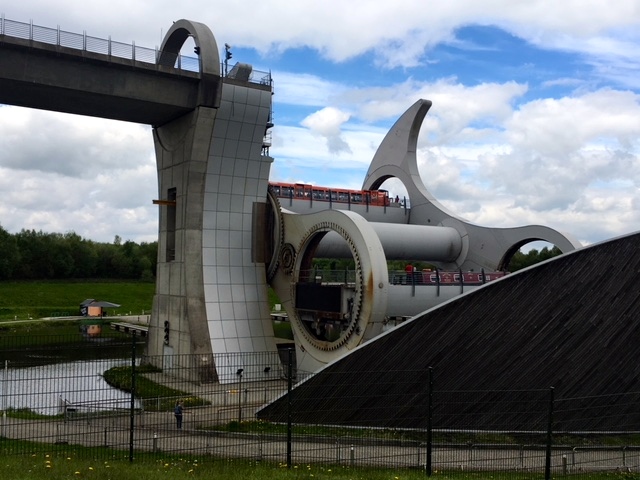 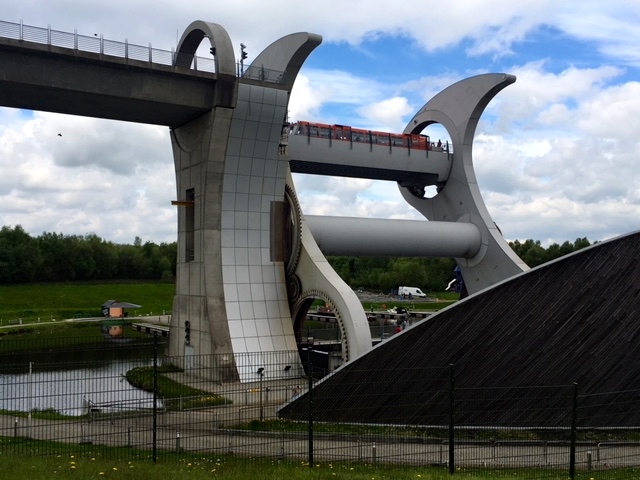 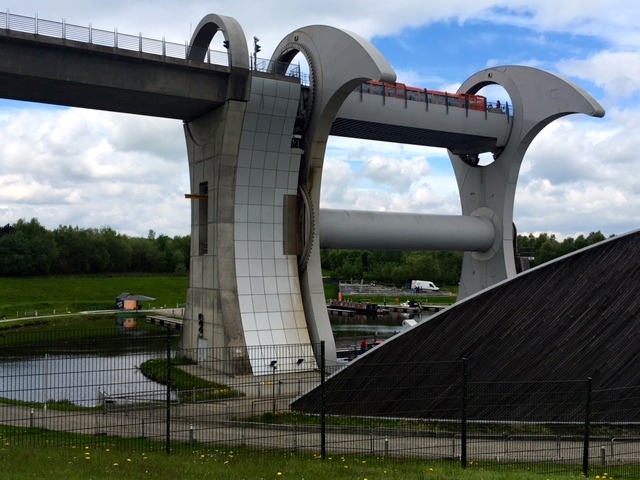 We then joined OUR canal, The Forth and Clyde Canal! No sign of Bonny and while there were plenty of walkers and cyclists on the towpath, we saw virtually no boat traffic. Seems our canal is not pulling in the pennies. 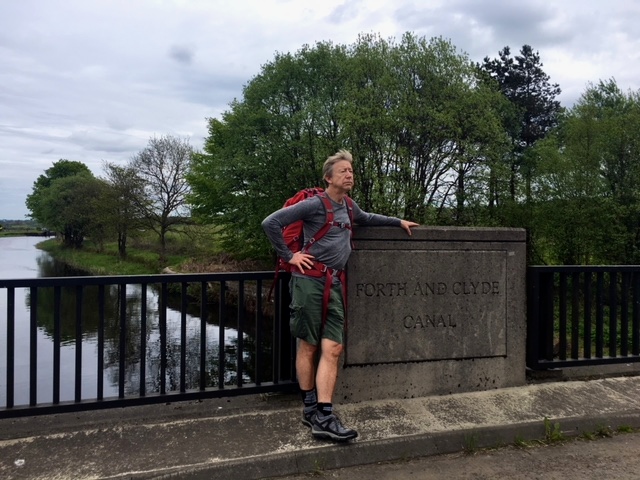 The Forth and Clyde Canal

We soon came to the remains of Rough Castle, the site of one of the forts along the Antonine Wall. And here I’ll hand over to Marcus Aurelius Forth for his comments ..

Amazingly, close by The Falkirk Wheel is another “by far the biggest engineering project ever undertaken in the area for their time”, the Antonine Wall, which snaked right across the country from Clyde to Forth. It was undertaken at the order of Imperator Titus Aelius Aurelius Caesar Antoninus (a doozy for The Hat Game). He followed Hadrian as Emperor, and perhaps borrowing from The Hadrian/Trump book of how to run large countries, decided too to build a wall. Given that there was already a perfectly fine wall keeping The Scots out, he re-invaded them and built his own wall further north. 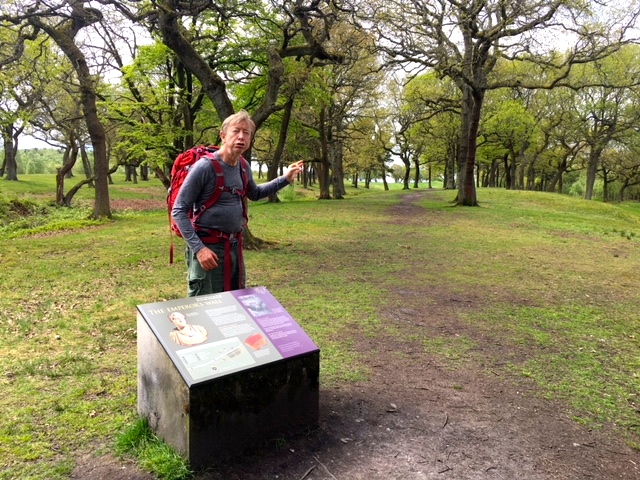 ‘It was huge and not only that, the Scots paid for it’ .

Unlike the stone-built Hadrian’s Wall to the south, the rampart of the Antonine Wall was constructed mostly out of layers of turf and reached a height of 3 m. Not just a wall, the defences also included a huge ditch, nearly 5m deep in places. It took 7000 men to build it, and included the ditch, the rampart, an outer mound constructed from the earth thrown out of the ditch, a service road and seventeen forts. The part of the Wall which we visited, The Rough Fort, was manned by auxiliary forces of Nervian Belgians, who along with the Menapii inspired the Asteryx comics. 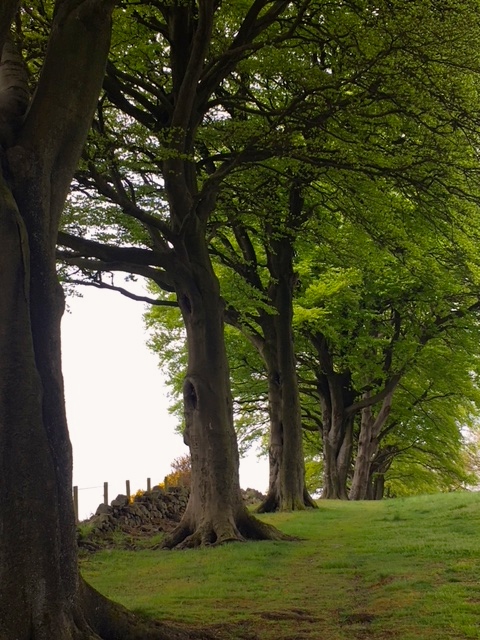 Beautiful woodland around the Wall 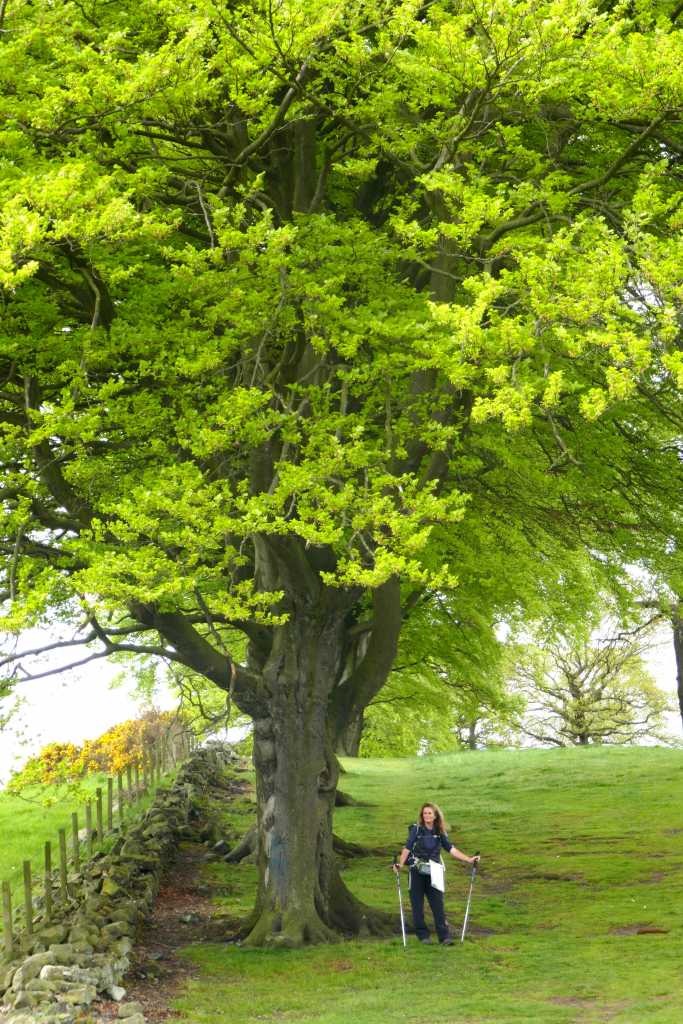 Our stop for the night stop was Kilsyth. Not too surprisingly, there was a settlement here in Roman times .. in fact, if you take just a glance at the map where we walked today it’s scattered with ‘forts’ and ‘fortlets’ and ‘Roman settlements’. Kilsyth has a rich and colourful history. However, it is as the birthplace of curling, the ‘roaring game’ that gives the town its place in the sporting arena. The first reference to a contest played in the area, using stones on ice was written about in 1541. And in 1716 the world’s first .. and still surviving .. curling club was founded in Kilsyth. Both Robert Burns and Sir Walter Scott referred to the game as “manly Scottish exercise.” Kilsyth men’s and ladies’ curling teams thrive to this day and both have won the British Open in the past. And if I were here on a Monday evening, I know that I would have been welcome to watch a practice at the club, as it’s ladies night. Sadly, it’s Tuesday.

Black Dog Tails
Rip was a very special dog. Although a stray with no training, he had a nose for rescue. In 1940 he found over 100 victims of the air raids in London. It was recognising his huge success that led other dogs to be officially trained as rescue dogs. He was awarded the Dickin Prize as well as the Blue Cross Prize. 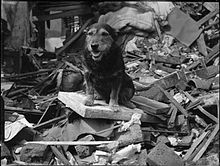