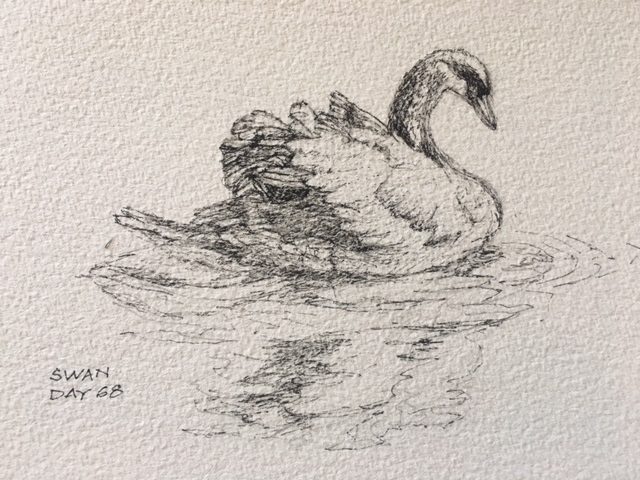 I was confused when I started walking this morning. The sun was shining, the vivid greens of spring were idyllic and the path I was following was steady, well-marked and level. Why then did I feel under par. Forth and Clyde Canal looking splendid

The more I tried to fathom it out the less clear it became. I didn’t feel sad or miserable or homesick or worried .. I just felt kind of flat. Despite the high contrast vistas in front of me, everything was ‘vanilla’. I tried blaming it on my feet. The left one has developed a tender patch on the heel which even Compede’s are failing to deal with. With every step there’s a niggle. But it really wasn’t that. Nor was it the dull ache that I now get in my back when I’m wearing my pack .. I’d been able to leave the bulk of its contents behind today. In fact it wasn’t any of the aches and pains that are too boring to mention. An entire pallet of greens

I began to recall what other walkers have said at this stage in the journey. In the last few days of walking The Pennine Way, one blogger said he felt he was on a travellator, in which the scenery never changed. He said he felt trapped and is if it would never end. Another walker talked about Groundhog Day, how she felt she was waking up to the identical routine day after day .. making little progress. She talked of feeling ‘depleted’ for a while on her journey.

It came to me that while I’d welcomed the canal with open arms a few days ago .. it promised easy walking after lots of climbing .. it had become my version of the same repetition fatigue. Every step was virtually identical, the exact same muscle group was being pounded with every stride on the same surface and despite the beauty of the surroundings, the path was straight and relentless. For someone who loves variety and is poor at incorporating routine into their lives, this had subconsciously got under my skin. Looking beneath the surface

I decided to chuck off the pack and sit on the bank, close to the water. It was quiet and peaceful. One of the tools I used when I had depression a few years ago was mindfulness meditation. Along with medication, help from a psychologist and exercise it was one of the keys to getting myself better. The woman who taught me mindfulness in Sydney gave me some of her recorded led-meditations. Among them was one called, ‘The Lake Meditation’, which was a great refuge for me at times. What resonated most deeply was the way she described how in the depths of the lake, there will always remain stillness, even when on the surface there may be storms or rain or wind or sun, all affecting the outward appearance. The meditation encourages you to find this serenity and stillness within yourself .. become like a lake. Over the years it has been a great comfort to me and today, sitting beside the river, it helped to dislodge some of my lacklustre feelings and gather positive thoughts, before continuing my walk. I met a couple of anglers along the canal today. They were fishing for roach, perch and pike. I got chatting to one who agreed that for him fishing was less about what he caught and more about how reverted to living slowly. He suggested that it was becoming one of the obsessions of our age, starting trends like slow cooking, craftwork and mindfulness .. a quiet protest against the ever-hastening pace of technological change. 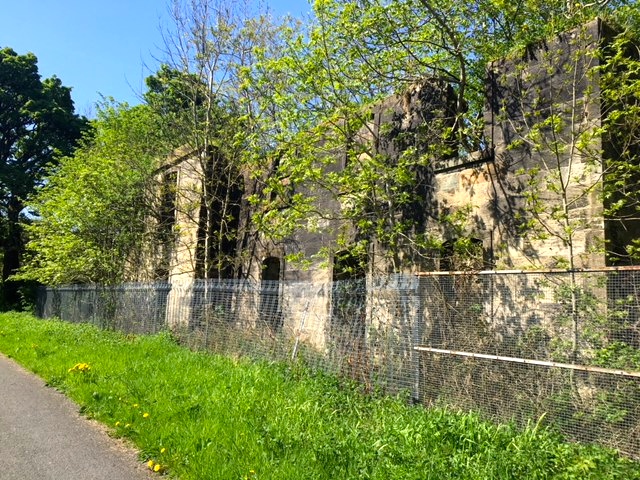 One of the few buildings along the way today was an old derelict stable block. Of course, when the canals were in their heyday, horses would have been much in demand, pulling up to ten times their weight on the barges. The stables housed fresh horses to replace those who had completed their shift. Upstairs there were rooms for the canal workers to take a well-earned rest.

A solitary swan made an appearance along the Forth and Clyde Canal in the morning. It spent five minutes demonstrating what wonderful contortionists they are. And then swimming away, he left me with a heart in the water. 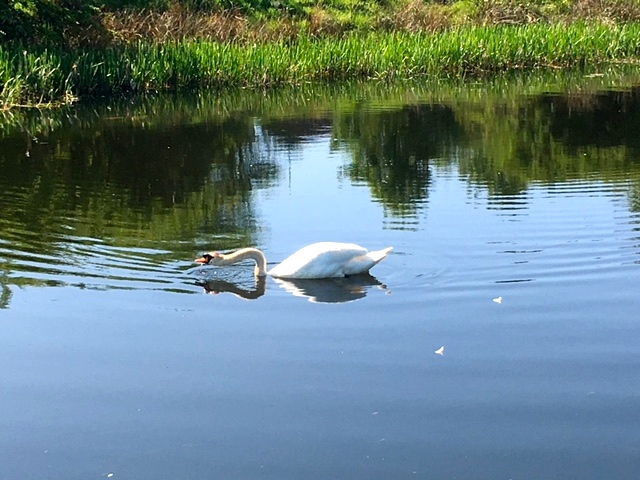 At Hillhead the John Muir Way took its leave of the Forth and Clyde Canal and headed north over the River Kelvin to Milton of Campsie. A disused railway line replaced the canal towpath, with the old bridges and tunnels left as legacies of the line. The signs for the John Muir Way were joined by signs for the Thomas Muir Way, which was a tad confusing. Was he a brother or a cousin, equally keen on the great outdoors? As I drank the tea from my flask I consulted the oracle, Mr Google. To my surprise the two men were totally unconnected, save for their surnames. Robert was a Scotsman, born locally, who became a political reformer. He ended up falling foul of the system and was eventually deported to Australia, to Kirribilli in New South Wales .. a suburb which just happens to neighbour ours in Sydney! I was delighted by the coincidence, if not about his fate. It was lucky that the bridges and tunnels were wide on this path. Lucky because there was no way that Alfie the chocolate labrador would have been able to carry his log successfully through, otherwise. It was a party trick that our first yellow lab also loved to pull off, scraping many shins along the way. His name was Rover and he had just the same laid-back temperament as Alfie. So proud of himself!

For the latter part of the day the trail followed Glazert Water, in and out of the woods. It also had the beautiful backdrop of the Campsie Fells to the north. As the day’s walk came to a close at Strathblaine, I walked past the volcanic hillock of Dunglass. The horizontal columns of rock are made of basalt, which can also be found on the Giant’s Causeway. At Strathblaine I said farewell to The John Muir Way. I was not totally convinced the Father of The Wilderness would have been honoured to have the chosen route named after him. In parts it was a little dull and in others, such as Kilsyth and Falkirk, it was anything but wilderness country .. instead . I was also glad that my route from now on will incorporate far more hills ..

Black Dog Tails
Dax the police dog, saved his handler’s life from an armed burglar who attempted an ambush in a darkened attic. Chris Alberini pays tribute to Dax in the story in the link.