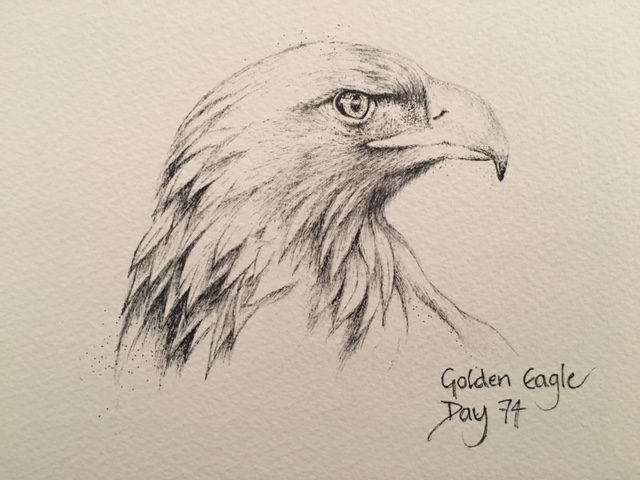 After a pause to take in the beautiful Loch Tulla, we headed north to cross Rannoch Moor, one of the classic stages of the WHW. It’s a vast wilderness of heather and bog encircled by rocky mountains. It can be a ‘place of otherworldly beauty – in a storm it is wild, forbidding and exposed’. Not too surprising then that Danny Boyle chose it as the location to film the rural, remote sections of ‘Trainspotting’. It was also the locale for ‘Skyfall’, one of the best Bond movies in my view. 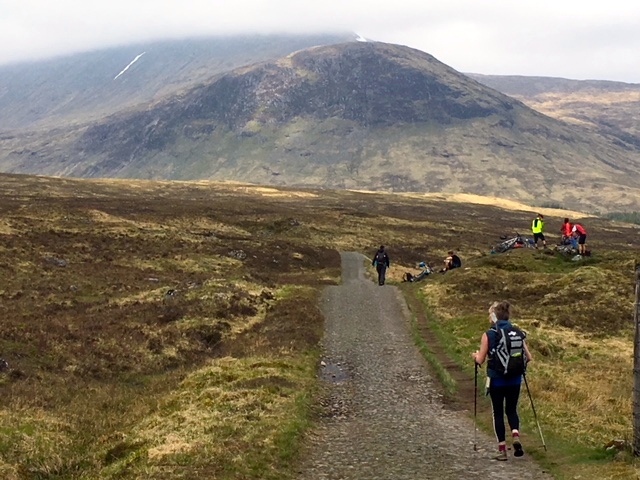 A sombre looking start to the day

The track used by the Way is again one of General Caulfeild’s military roads. This one was built after the brutal suppression of Bonnie Prince Charlie’s rising of 1745, which spelt out the end of any hope for the return of the Stuarts to the English throne and an end to catholicism as the national faith.

Charlie, otherwise known as Charles Edward Stuart or The Young Pretender, had a cunning plan. He took advantage of the fact that in 1745 the lion’s share of the British army was away from home, fighting in the War of Austrian Succession. He marched with his Highland clansmen down to Inverness and onwards as far as Derby, raising victories all along the way. News of his progress spread fast however and divisions of the national army were swiftly sent back from Austria to do battle with him. Charlie retreated to Inverness and it was thereabouts, at the Battle of Culloden that the Jacobites fairly bit the dust.

It was on flat, open, marshy ground, much like the terrain we’re walking on today that Charlie chose to fight, against the advice of his generals. This left his men terribly exposed and before long General Cumberland and his British Royal artillery were using musket fire and grapeshot to tear them apart, with considerable ease. Any survivors were hunted down viciously by Cumberland’s troops. The number of atrocities earned him the title ‘The Butcher’. Just looking around us today it was all too easy to imagine how easy the defeat would have been. 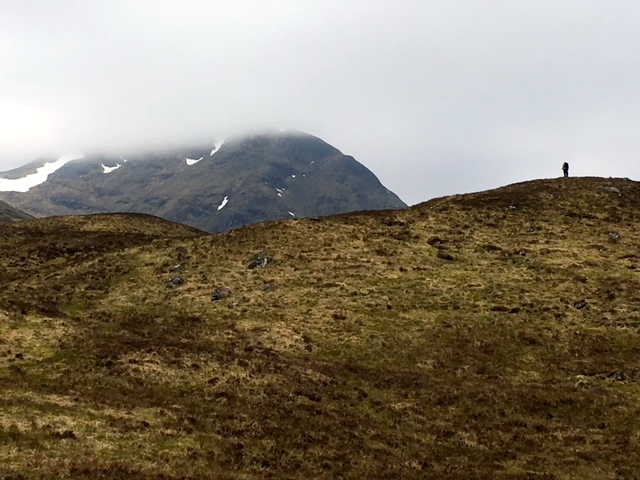 Bonny Prince Charlie’s own flight from the battle scene is legendary and commemorated in the haunting folk song ‘The Skye Boat Song’, which my mum used to sing to our little boy when putting him to bed. I suspect many a baby has fallen asleep to this lullaby. It tells the story of Flora MacDonald rowing the prince in a humble rowboat over to the Isle of Skye. From there he was able to evade capture and escape to France, where he lived for the rest of his life.

Speed, bonnie boat, like a bird on the wing,
Onward! the sailors cry;
Carry the lad that’s born to be King
Over the sea to Skye

The terrain was beautifully bleak with interconnected lochans splattered across the moor. It’s lucky we had the stony track to follow or I feel sure the surrounding bog would have swallowed us up. As the blue sky gradually nudged the clouds out of the way the views became more and more stunning. It was difficult not to stop snapping the shutter ..  we comforted ourselves that we lived in a digital age when we could later delete images which didn’t make the grade. 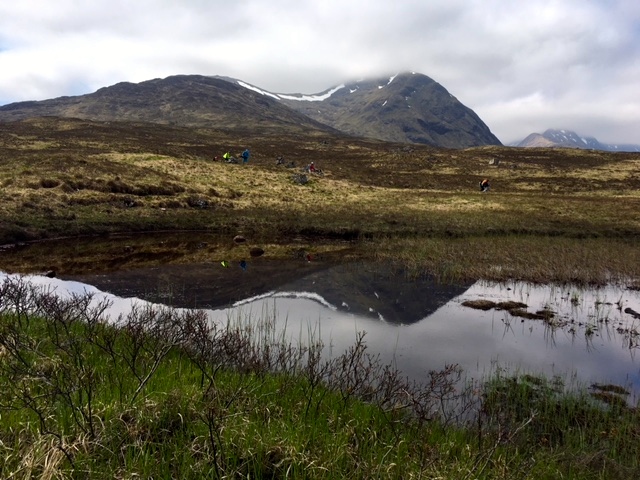 Glorious views across the moor 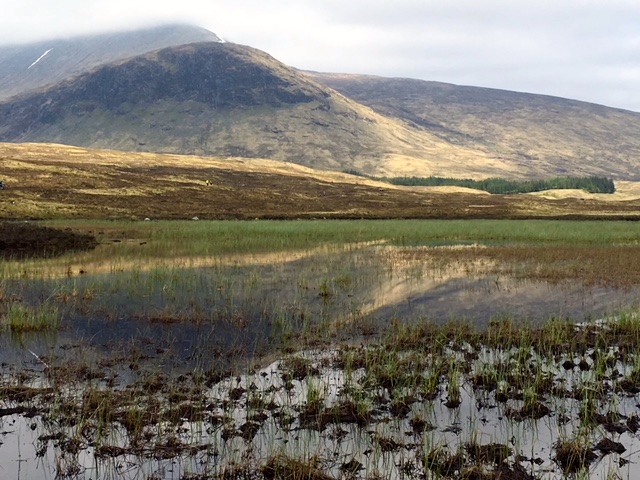 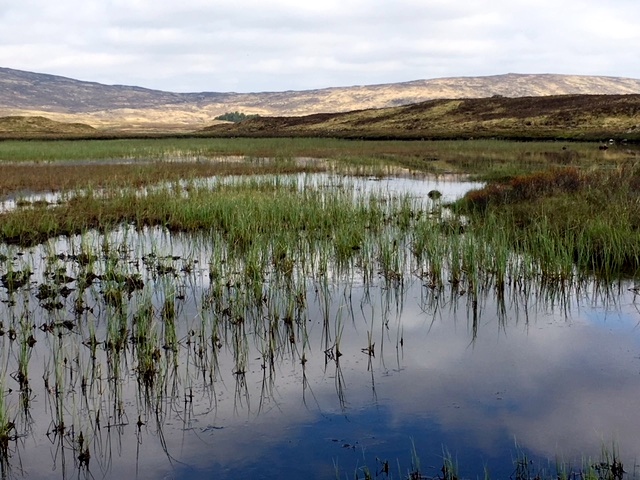 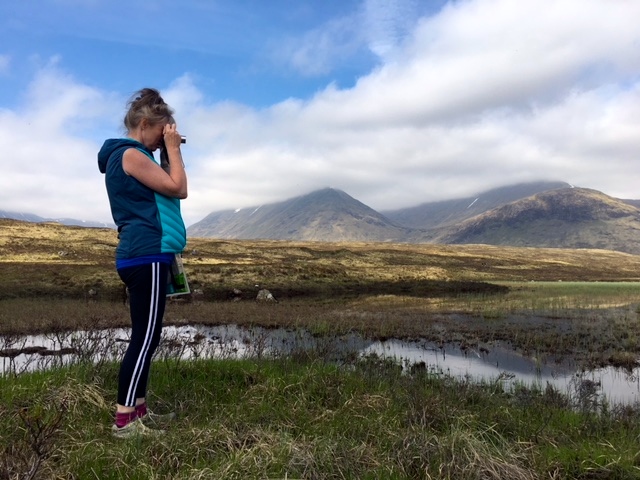 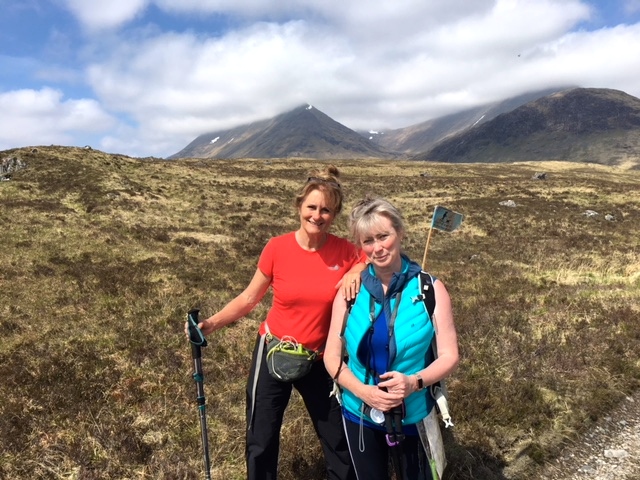 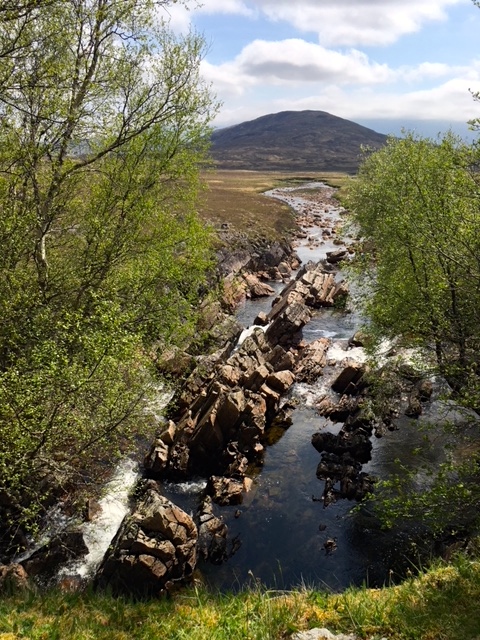 Ba Bridge over .. you guessed it, the River Ba

We stopped at Ba Bridge not only to admire the tumbling water beneath it but also for me to do a one foot paddle. The water in the becks is well cool enough to act as an icepack on my ankle. Perfect. 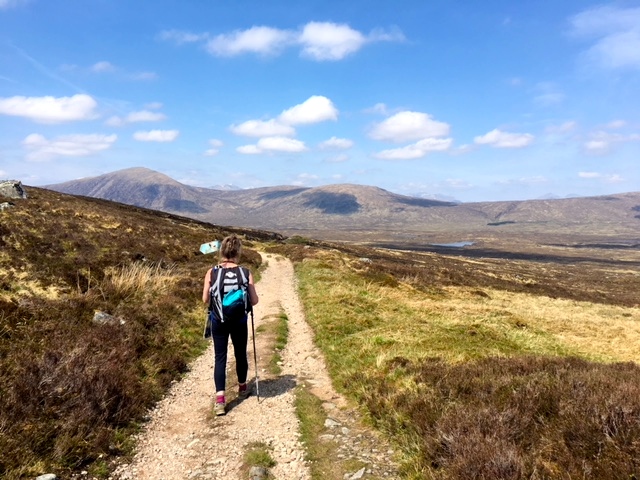 Blue skies over The Moss

After skirting around Meall a’Bhuiridh mountain we came to Glen Coe, Britain’s oldest ski area. During the winter months I was amazed to discover that there are 20 runs serviced by 8 lifts. The famous ‘flypaper’ run is the UK’s steepest black run .. although, it is not revealed just how many black runs actually exist in UK!

One thing is for sure, any skier, mountain biker or humble walker would have been hugely delighted to reach Kingshouse Hotel at the foot of the mountain, surprisingly owned by the Belgian group Stellar Artois. However, it’s a building site at the moment and we were rehoused at the Glencoe Mountain Resort. The travel writer Charlie Loran lamented that, ‘It’s a particularly insensitive development in immensely beautiful surroundings’. I could not agree more. To say it was built in the ‘brutalist’ style would be to flatter it. Without a doubt it was the worst stop of my entire trip. 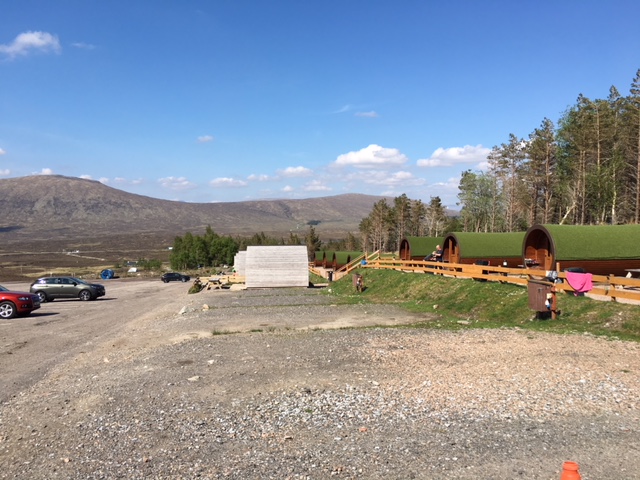 The car park calling itself the Glencoe Mountain Resort 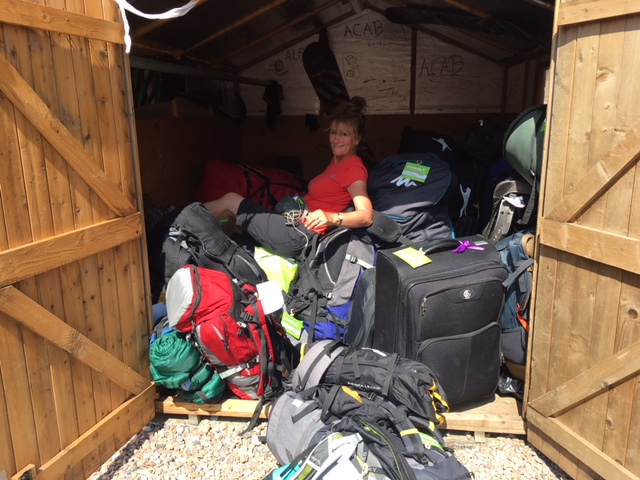 Trying to extricate Helks’ backpack from the luggage transfer delivery

We were assigned a so-called ‘hobbit house’. Bilbo Baggins would have been shocked and appalled. Inside there was nothing but a couple of ledges with plastic foam mattresses. Oh, and a kettle .. but nothing more beside. The loos were housed in the main block 50 metres away, across the gravel and car park. Not great for nocturnal peeing. 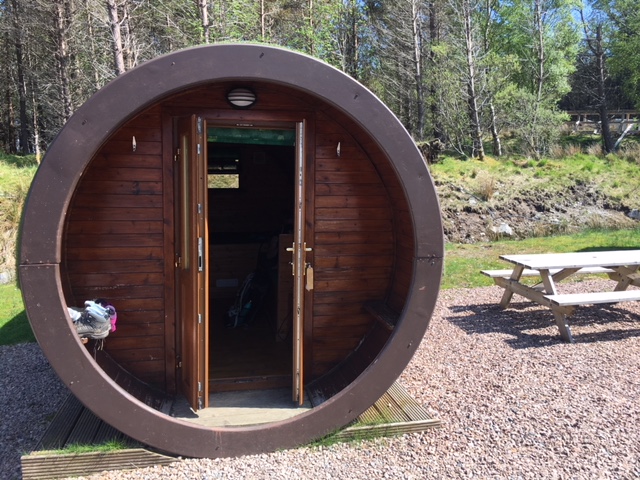 In my book the word ‘resort’ is used to indicate a luxury holiday location. This was very much the exception .. no wifi, no pillows, no soap and on top of that virtually no food in the cafe and noisy. Noisy not just because of fellow hobbits, who did quieten down reasonably early, but because of the digger that started its work with the cuckoo. 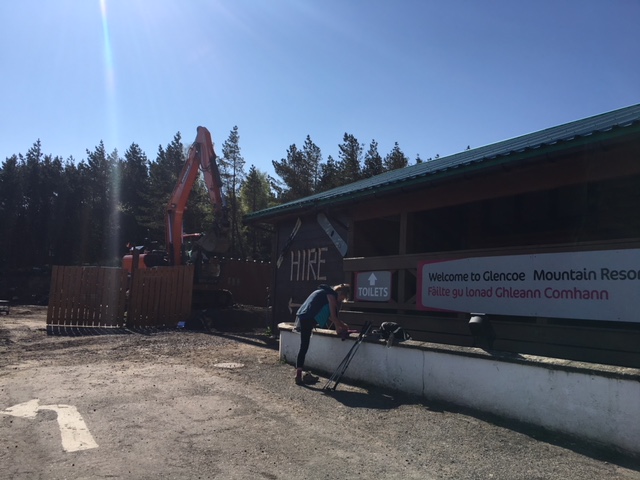 Digger adding to the idyll

Having said all that it did mean that we took a trip down the road to get dinner and wifi at Glencoe’s Clachaig Inn. It was the most extraordinary scenery along the way .. we felt we had entered the set for a Lord of the Rings movie. The pub served great food even if the wifi was glacial. So, a good end to a stunning day. The only sting in the tail was having to return to the hovel. 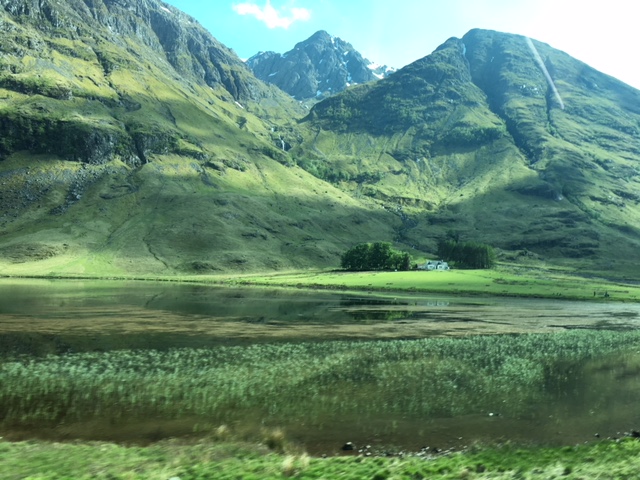 View from the window as we were driving to Glencoe

Black Dog Tails
Meet Nemo, Emmanuelle Macron’s new black lab-griffon cross. The First Dog will be constantly at his master’s side .. no heroic tales to tell as yet but he certainly looks the part and gets my vote! 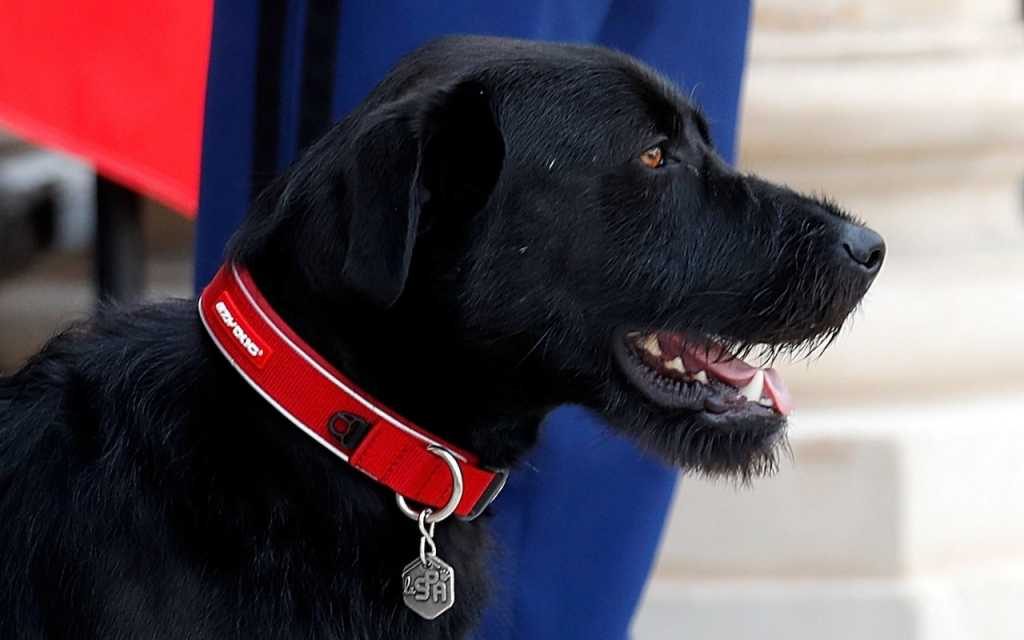