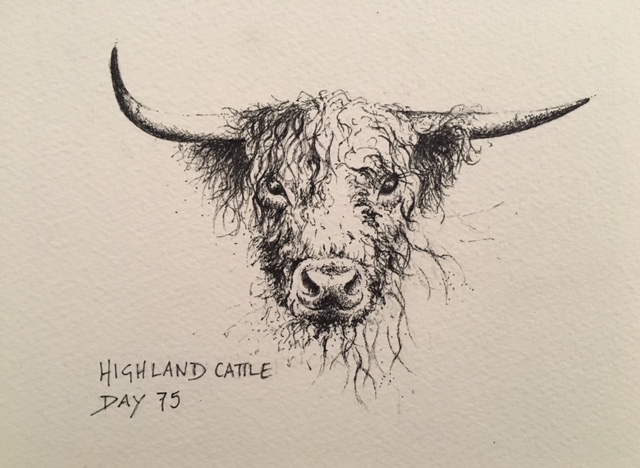 Helks and I both woke at 5 o’clock this morning and decided to get up and on our way. And then we both turned over on our foam mattresses and went back to sleep .. until 8.30. There hadn’t been much sleep in the night, what with the raucous laughter from our neighbours, the creaky mattresses and the scratching on the roof from an uninvited guest. The view as we emerged from our hobbit hole however, was exquisite. 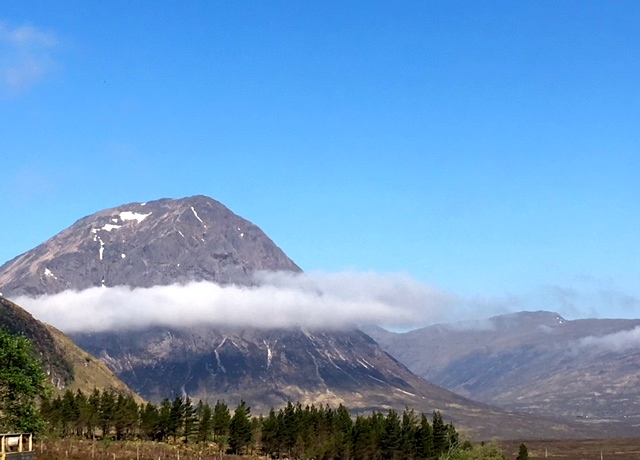 Glorious view from our Hobbit house

This morning we had the Devil’s Staircase in our sights. On a clear day, this is perhaps the most dramatic section of the West Highland Way as it climbs to the highest point on the route with fabulous views of the Glencoe mountains. We had the clearest of days! The path is easy to follow but stony and rough in places and steep to the top. I suspect it was called the Devil’s Staircase by the men who built the path and not by its climbers.

Before reaching the staircase however, there were other things to see. The historic Kingshouse was undergoing extreme renovations .. the frontage was clearly being preserved but not much behind it still existed. Instead, the skeleton of the proposed extension towered over the original cottage. Stellar Artois clearly had big plans. 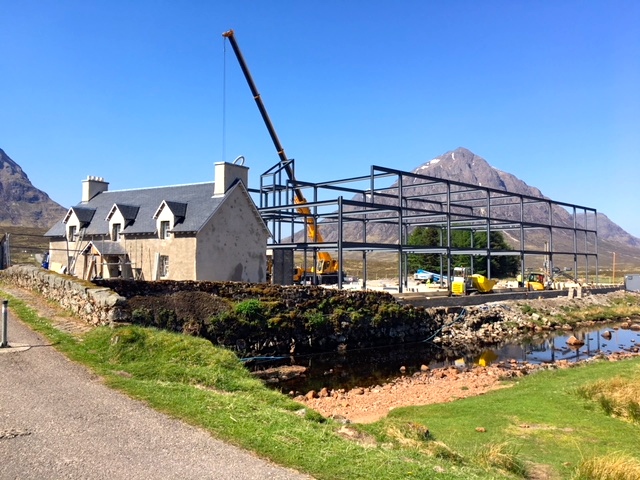 For a short while the Way runs along the side of the A82 but not too close to be bothered by the surprisingly heavy traffic. There were plenty of streams running down the mountain-side to rest beside and dip feet into. 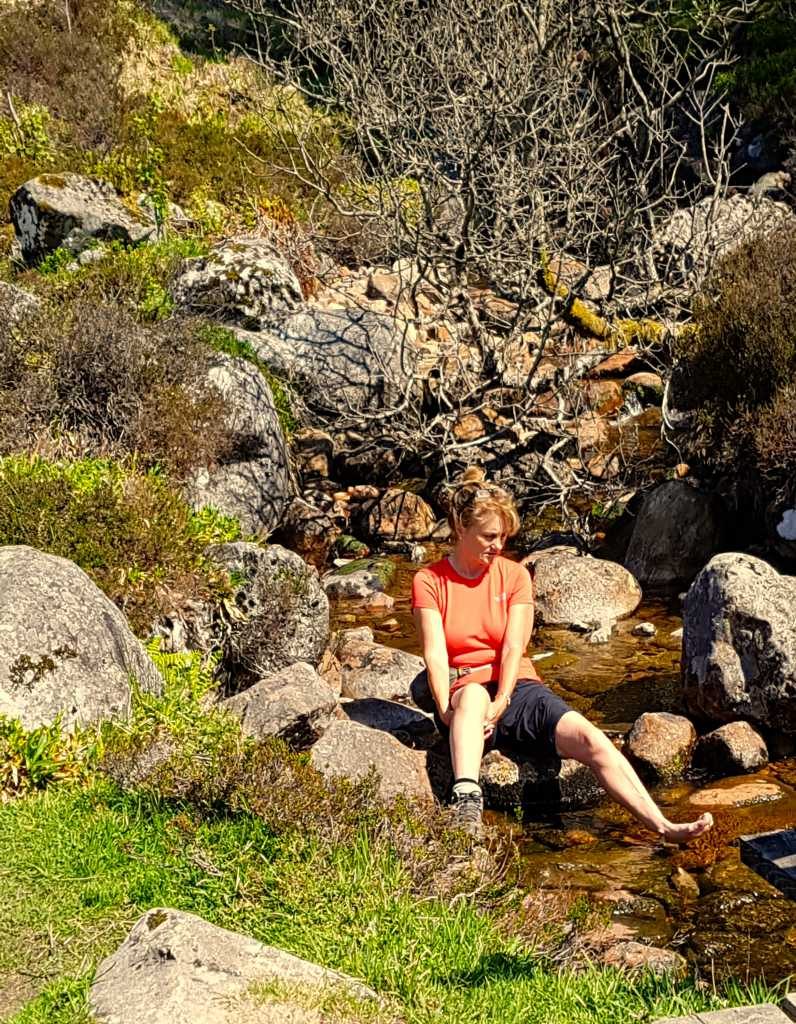 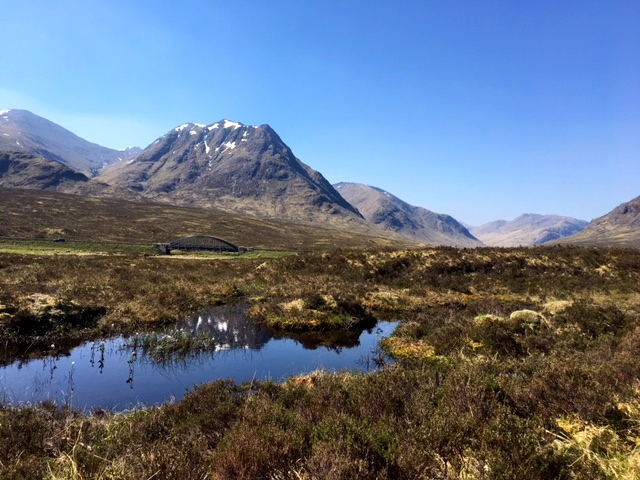 Bogginess on either side of the path 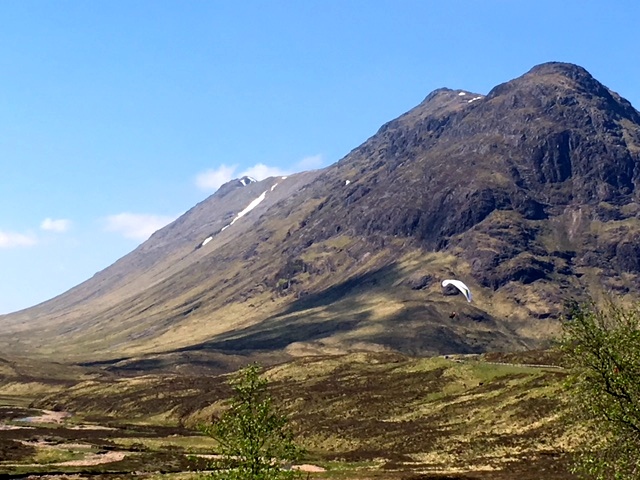 Viewing the glen from the air

The day was perfect for paragliders and we saw several coming in to land in the basin of the glen. It reminded me of the time when I did it in tandem in France. As we were racing towards the edge of the escarpment I remember having last minute butterflies and shouting out, ‘I’ve changed my mind!’. And the instructor’s reply .. ‘Too late now!’.  Patrick did a similar ride but on skis. As he and his instructor were about to launch off into the Alps the instructor asked him, ‘Have you done this before?’ And when Patrick answered ‘No’, he replied in an outrageously strong French accent, ‘Tant pis .. neither have I!’. 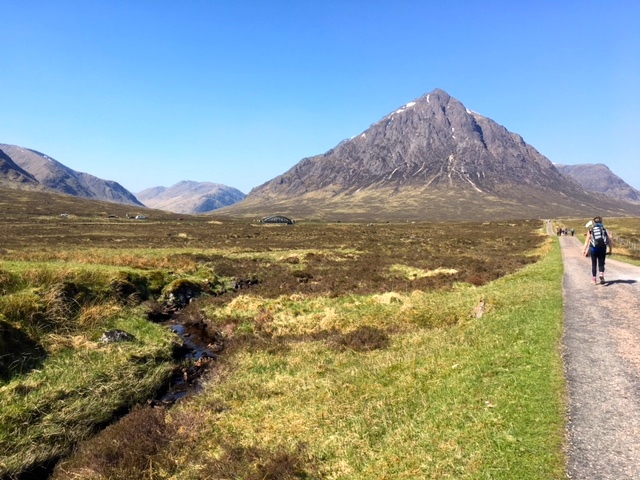 And then the climb started up towards the zig zag of the Staircase. It was steep but not nearly as onerous as I had thought it might be. We passed a crocodile of Czech hikers, sticking very closely together behind their voluble leader. It was busy with walkers to the top, each of varying fitness levels. It’s clearly a section of the WHW which is climbed by day-trippers and quite understandably so .. the views were magnificent. 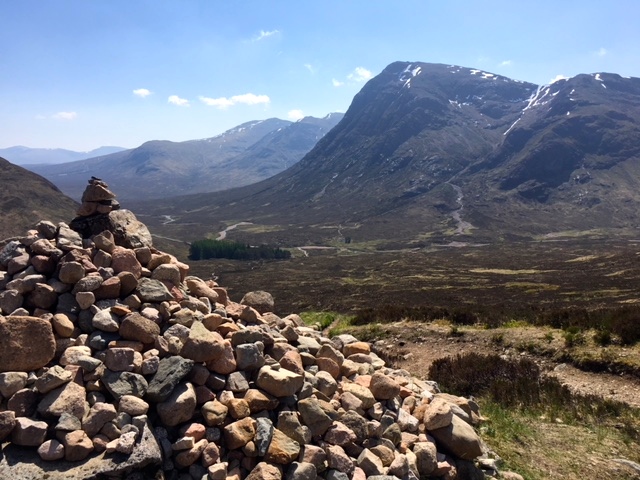 Giant cairn on the way up 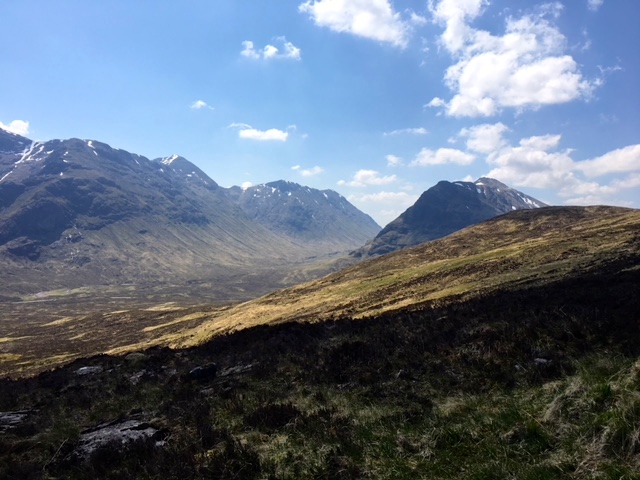 View along the way

And from the top

The long, gentle descent to Kinlochleven runs along the edge of some wild moorland scenery stretching out to the Blackwater reservoir to the east, looping across the shallow valleys of Coire Odhar Beag and Coire Odhar Mhor before coming alongside the service track to the reservoir. The track then takes a languorous dogleg through the forested Coire Mhoraire. As we try saying the names out loud we sound increasingly as if we’re speaking Elvish. And the more Elvish we try the more ridiculous it sounds, to the extent that we get a childish fit of the giggles. It’s pretty clear that Peter Jackson would never have cast us as hobbits in any of his magnificent films. 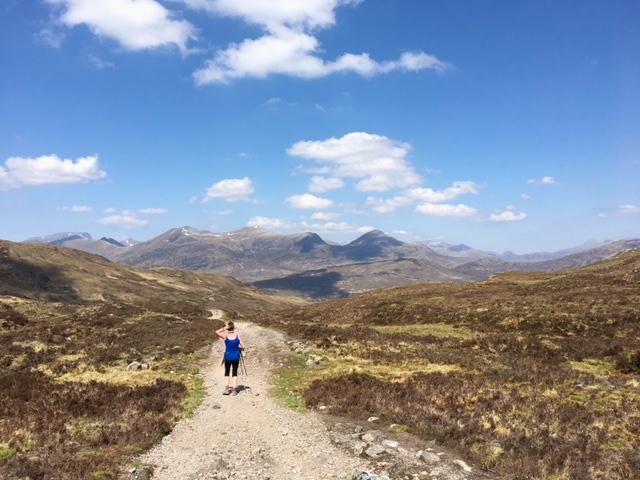 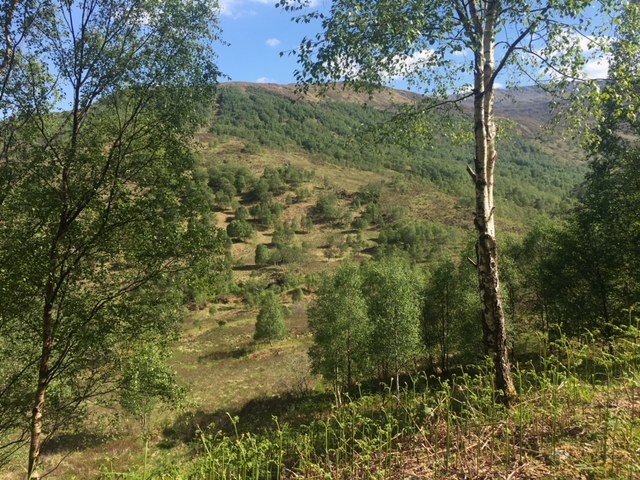 Kinlochleven lies at the head of the fjord-like Loch Leven, encircled on three sides by spectacular mountains, the Mamores. The area is outstandingly pretty. It was a great place to film the epic movie,’Braveheart’ with the blue-faced Mel Gibson as William Wallace. The film told the true story of Sir William Wallace who was a Scottish knight and a significant leader during the Wars of Scottish Independence. The wars were a series of military campaigns fought between Scotland and England in the late 13th and early 14th centuries.

Wallace successfully defeated an English army at the Battle of Stirling Bridge in September 1297, after which he was appointed Guardian of Scotland. His guardianship didn’t last long. In July of the following year his army was defeated at the Battle of Falkirk. Several years later Wallace was captured close to Glasgow and handed over to King Edward 1 of England. Making an example of him, Edward had him hanged, drawn and quartered for high treason and crimes against English civilians. His name has lived on for centuries, reaching iconic status far beyond Scotland. He is the protagonist of Blind Harry’s 15th century poem, ‘The Wallace’. Sir Walter Scott immortalised him in his literary work. And of course, the award-winning film Braveheart did its bit to secure him in the minds of all cinema-goers in the 20th century. 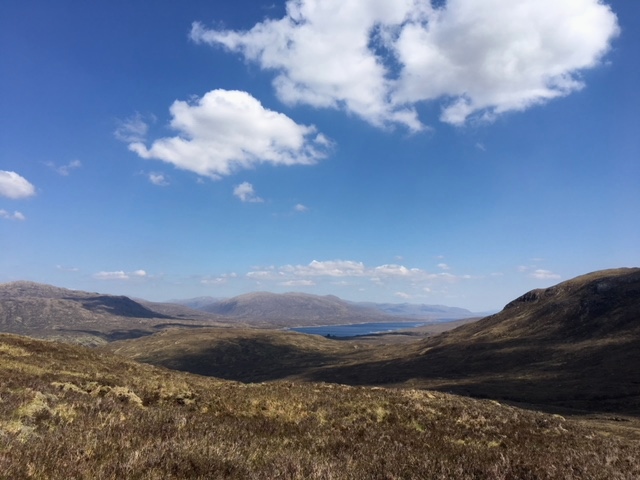 Kinlochleven doubled in size when an aluminium smelter was built in 1904. The processing plant was powered by a hydroelectric scheme, created up in the mountains. Not long after its completion Kinlochleven became the first village in the world to have electricity connected to every single house, giving it the name ‘The Electric Village’. 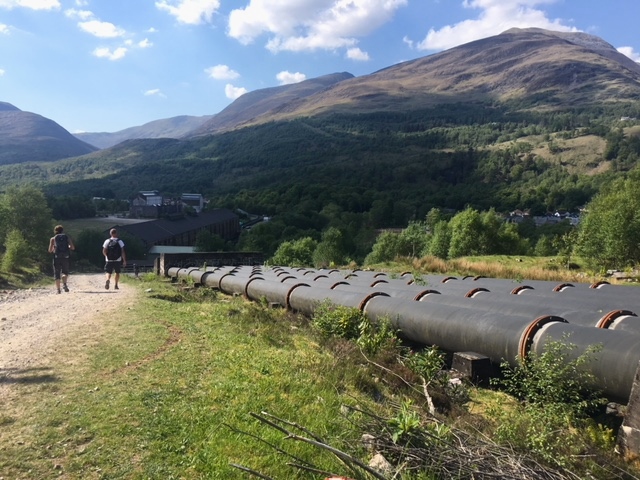 After reading about Kinlochlevan I was expecting a repeat of the less than inspiring Kilsyth or Crianlarich. But instead, after passing the erstwhile smelting factory, we came to the River Leven and the surrounding village. I’m sure the blue skies and sun helped but there was no way you could put them all into the same smelting pot, in my view.

And Allt-na Leven, our bed and breakfast stop for the night, was a slice of heaven. It went straight to the top of the 75 places I’ve stayed at .. bright and clean and every last detail to make things comfortable for walkers had been thought of. I arrived ahead of my sister and mentioned that she was having difficulties with her knee. As soon as Helks walked through the door, the lovely owners, Pauline and Wullie, handed her an ice-pack. The room was full of thoughtful details .. home-made biscuits, all sorts of toiletries including scissors and tweezers that you were unlikely to have carried in your backpack and best of all .. the fluffiest of bathrobes. Having worn the same clothes for nearly three months it was the biggest luxury to pull on something new and blissfully comforting. I asked my sister if she’d mind me wearing it to dinner but then sense and decorum prevailed. http://www.bedandbreakfastkinlochleven.co.uk 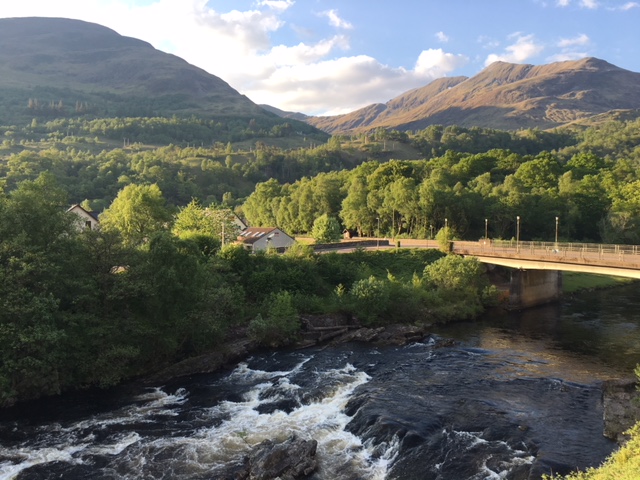 Nowadays, Kinlochleven’s revenue comes largely from tourists and walkers. Not too surprising considering the West Highland Way attracts over 85,000 walkers a year and each and everyone of them has to pass through the village. For those who are attracted to walking up walls or glaciers there is the national ice climbing centre in the village: the chillingly named ‘Ice Factor’. The centre includes the biggest indoor ice climbing wall in the world, as well as the highest indoor articulated rock climbing wall. It also has a sauna and steam room which sounded way more attractive to us.

Black Dog Tails
Wicket is the resident hero dog in Brisbane’s Nursery Road State School for kids with a wide range of physical and developmental difficulties. 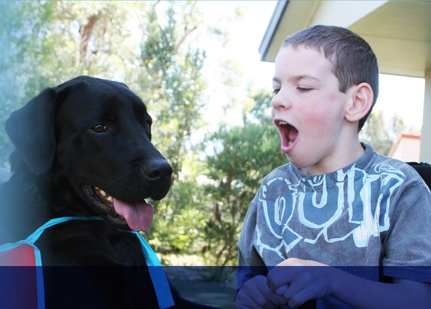