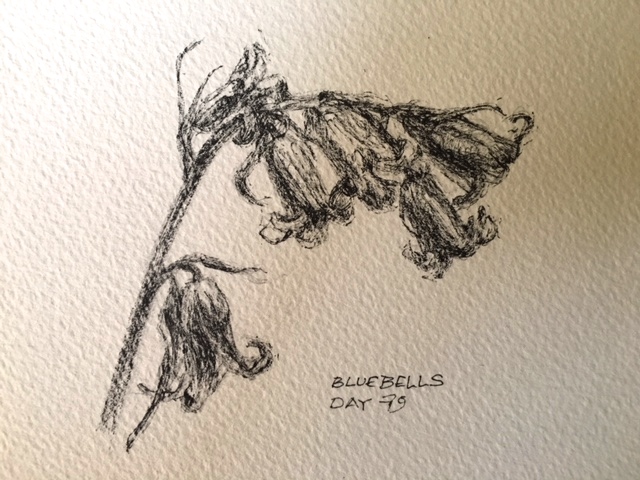 Some of the longer days on this journey have gone on and on, feeling as if they would never finish. Today’s walk of 17 miles should really have been one of those days. But the myriad of conversations we had about our hopes and aspirations, our children and our families, the cosmos and the universe, meant the day sped by at galactic speed.  From Invergarry we set off through Nursery Wood until we reached the shore of Loch Oich. It was damp and mossy underfoot and the views across to the ruins of Invergarry Castle were utterly beautiful .. although for some absurd reason there is no photographic record. Too much chatting probably.

After flooding destroyed the old stone bridge over the River Oich in 1849, a new bridge was needed. Enter stage right, an English brewer, James Dredge. Not an obvious choice for the creation of a bridge, you’re thinking.  However, Dredge threw in the beer-making and became an engineer in later life. He designed an ingenious double-cantilever bridge. It was light and more stable than its stone predecessor and has clearly stood the test of time .. as have the other 30 bridges that he designed across the UK. 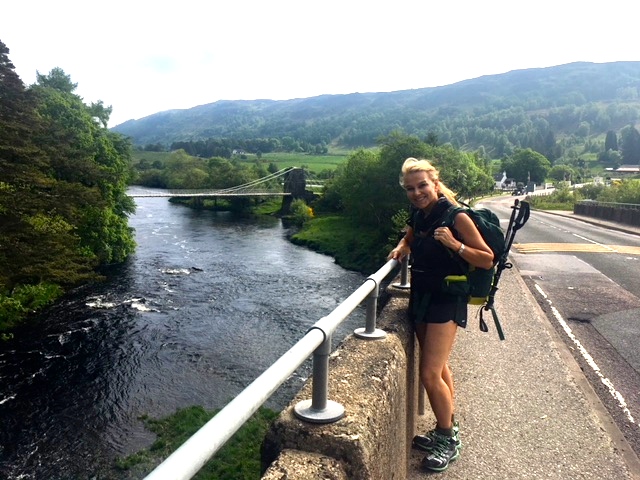 Dredge’s bridge over the River Oich

It was a hop, skip and a jump from Dredge’s bridge to Cullochy Lock, which marked the end of Loch Oich. There were plenty of sea-faring vessels on the Caledonian Canal which demonstrated just how important the waterway has been over the years. 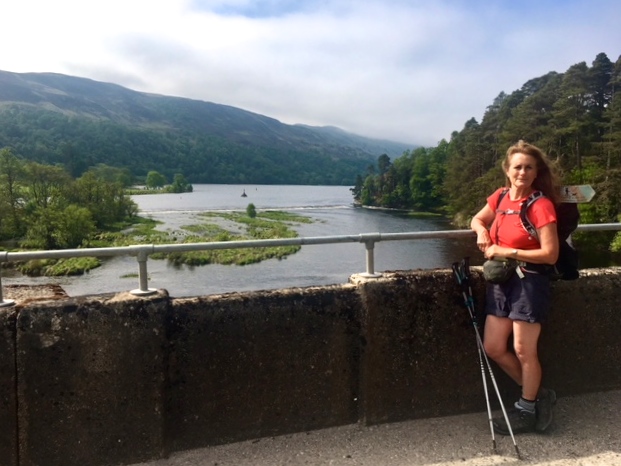 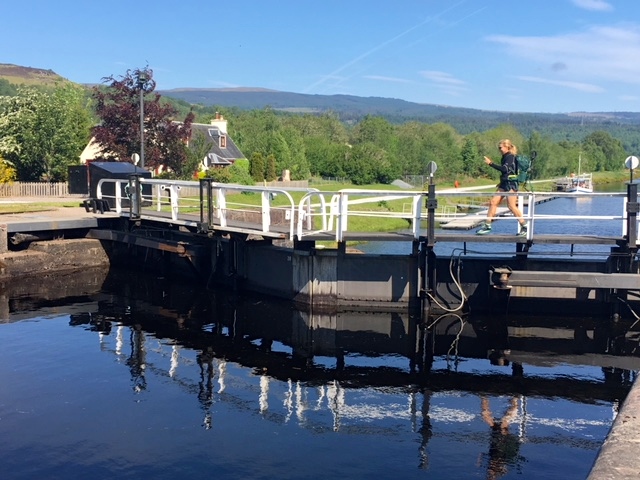 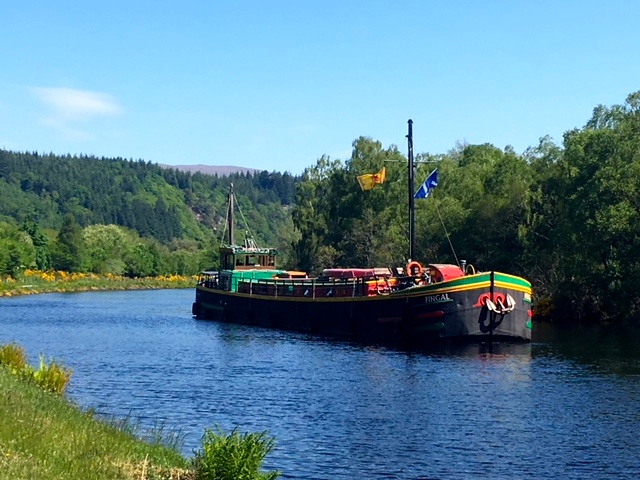 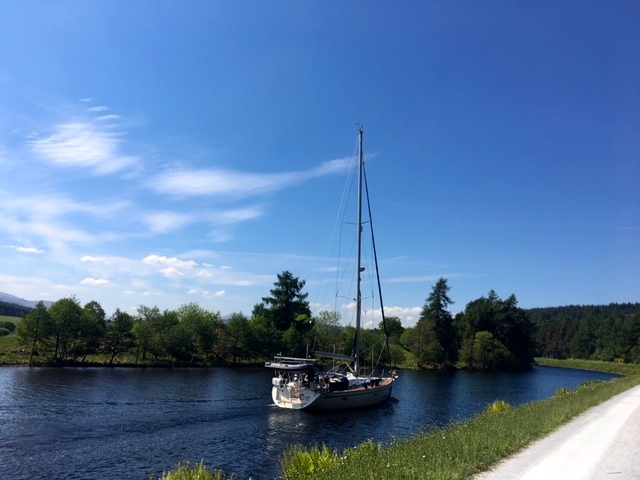 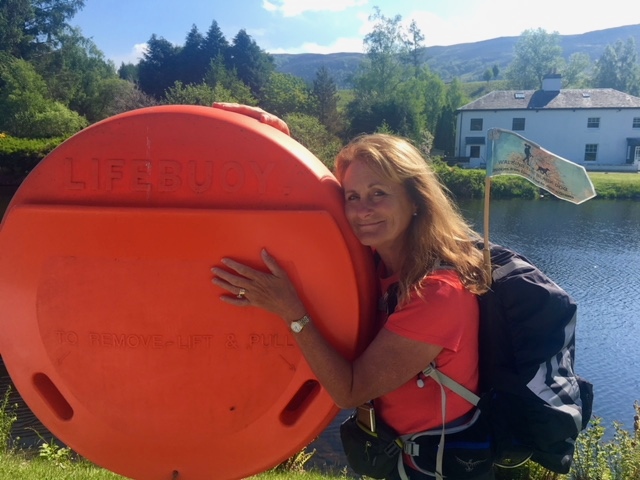 .. with lifebuoys at the ready

For a good while the gushing River Oich ran parallel to the Caledonian Canal and we walked between the two on the spit of a towpath. There was a fair amount of traffic on the canal and a group of people in canoes excitedly alerted us to the fact that a littler further on, a herd of red deer were grazing in the meadow. By the time we reached them they were far away but you can just about make them out in my photo! 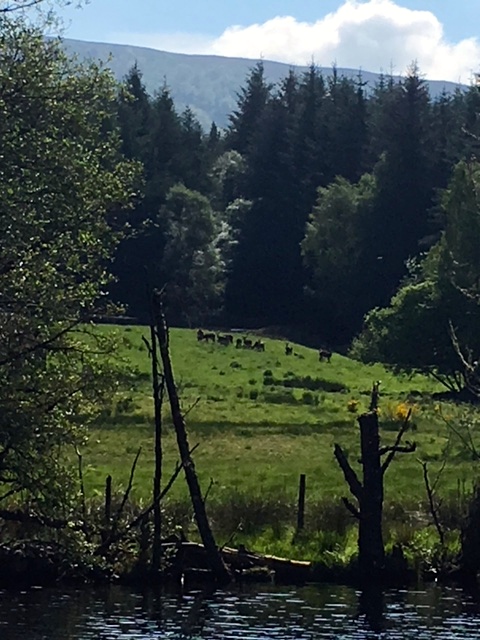 Our next point of interest was Fort Augustus. It’s a little village, built around the canal and locks, with a smattering of facilities, tasteful gift shops and a butcher where you can buy deer antlers. We stopped at one of the cafes for a coffee. It was so good we had a second, after we’d made sure we had the cash to pay for them. 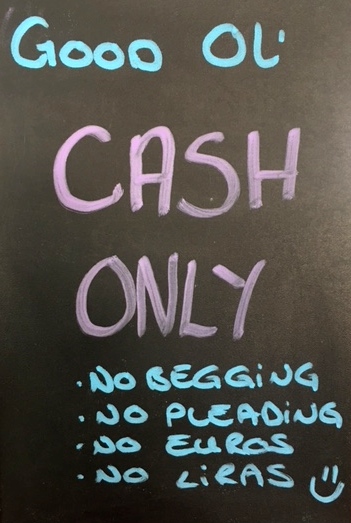 The aromatic St Cumin of Iona created a small settlement here in the 6th century. The Benedictines, many centuries later, built an abbey on a nearby spot, which they only vacated as recently as 1997. Today, the village was a hive of activity with men in kilts playing the pipes and flotillas of boats making their way through the lock. 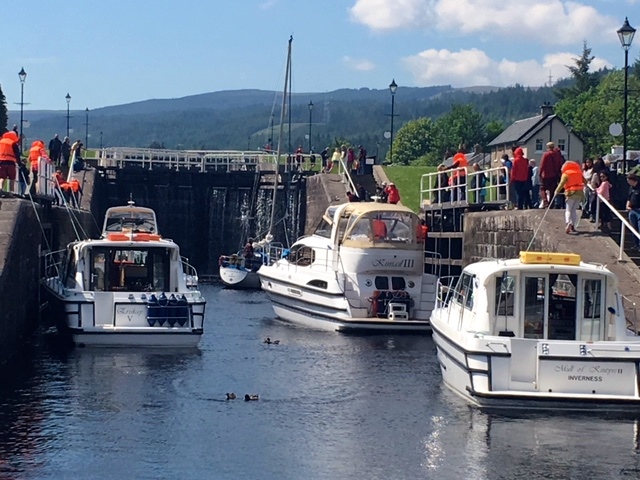 Just to the north of Fort Augustus, spanning the river, is the abandoned 18th century Old Oich tressle bridge. In its state of delapidation it looked picturesque, especially with the gulls swooping across in front of it. 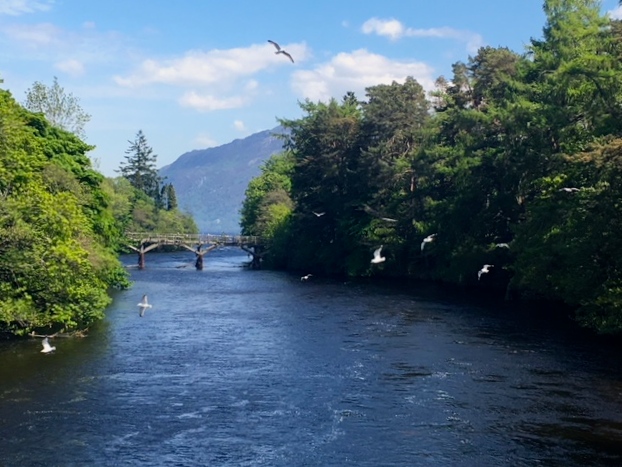 Fort Augustus lies at the head of Loch Ness, which is a massive 37 kilometres long. Our eyes subconsciously sharpened so that we wouldn’t miss anything that could possibly resemble a ‘monster, so horrible, so terrible’ .… especially as Sophie’s extremely informed taxi driver, the inimitable red-headed Rory, had told her the last sighting had been only two months ago in March. And as became clear, Rory knows just about everything there is to know about things Scottish. Including which part of the loch to jump into at Hogmanay at 4 in the morning. 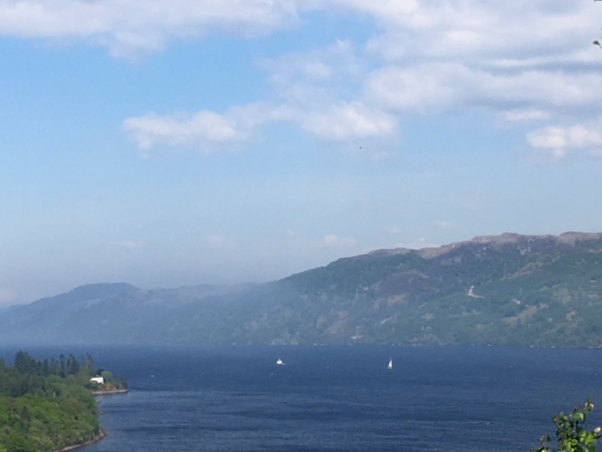 The scientific world relegates Nessie to folklore, all sightings put down to hoaxes, wishful thinking or the misidentification of a miscellany of inanimate objects. Such a shame! I would so like to have looked out at the loch and have the long neck and head emerge, followed by the two humps on the back of a Scottish beastie. Much has been written about the origin and hoaxes over the years. It’s thought the first sighting was in the 6th century AD when the Irish saint, Columba was able to perform his first miracle by making the sign of the cross and banishing the monster.

All was then quiet for several centuries until Londoner, George Spicer in 1933 reported that he and his wife had seen ‘the nearest approach to a dragon or pre-historic animal that I have ever seen in my life’, trundling across the road. The story made it into the ‘Inverness Courier’ and hot on the heels of the sighting, ‘The Daily Express’ got in on the act. Their story even had an accompanying photo, taken by Mr Hugh Gray. Amazingly, the story was taken so seriously that the Scottish Secretary for State issued orders to the police for them to prevent any possible threats to the beast’s life. The following year the anonymous ‘Surgeon’s photo’ of Nessie further piqued public interest. It must have been a wild time to be alive .. a time when the absence of sophisticated forensic science still allowed the possibility of a monster to be roaming the land. 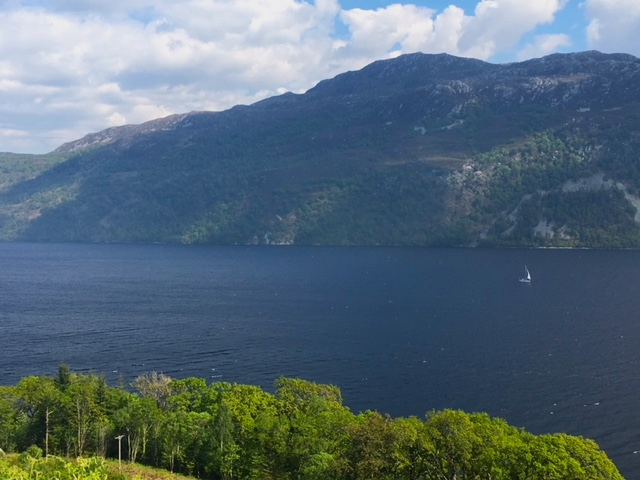 It’s been agreed by most since 1994 that the photo was an elaborate prank, born out of revenge. Marmaduke Wetherell had been publicly ridiculed by his employer, the Daily Mail, after he’d reported his finding of ‘Nessie footprints’ and they’d been exposed as a hoax. To make his monster, Wetherell had attached a wooden putty head to a toy submarine bought from Woollies. He photographed the beastie using an out of focus lens and got a third party to sell the photo to the Mail. The newspaper fell for it! Can’t think of a finer recipient to be fooled by such fake news, other than the Donald himself.

There have been countless theories and ‘sightings’ since, although no-one’s ever had their smart phone close enough to record the occasion. My own favourite was the suggestion that a travelling circus might have allowed their elephant to swim in the loch and that photographs of his trunk could have been construed as Nessie’s neck. Hoaxes have been ingenious .. a hippo foot umbrella stand used to make fake footprints, an elephant seal shaved of its whiskers after death and dumped in the loch. And then more recently, the finding of a dead deer on the shore of the loch, with a huge tooth in its side, purporting to be that of the monster .. in actual fact, it was a muntjac antler.

Google even got into the spirit of the search when they commemorated the 81st anniversary of the ‘surgeon’s photograph’ with a Google Doodle and added a ‘new feature to Google Street View, which enables users to explore the loch above and below the water’.

OK, OK. That’s quite enough on the monster.  I could very easily have sung to Sophie at the beginning of the day, ‘You’ll take the high road and I’ll take the low road‘ today as there are two parallel routes along Loch Ness. But we figured that if one of us were really to see the monster, then we’d need the other to be the witness, in order to be taken seriously.  OK .. truly, that’s enough. Time for a rest .. 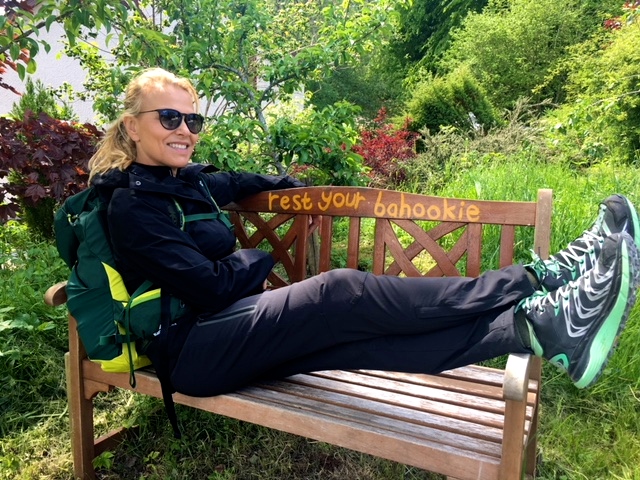 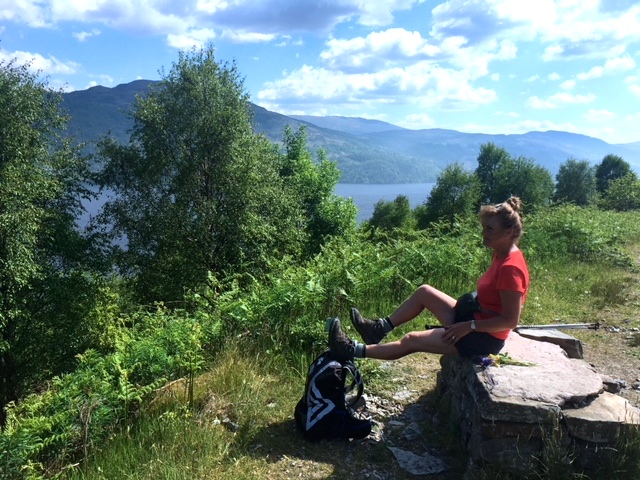 .. while I rested my sights on Nessie

The path we took was through woods and forest. There was an abundance of wild flowers which led to nostalgic conversations about our countryside childhoods spent in France and England. We shared the different folklore surrounding the flowers and the games and rhymes we’d used with our friends. As we reminisced we picked a few of the flowers to create a rustic bunch .. 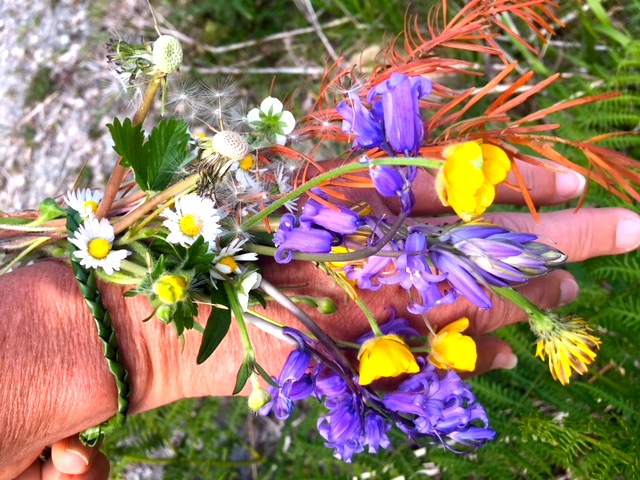 Gentle reader, if you grew up in Europe you’ll remember the heady aroma of bluebells or clochettes; daisies or paquerettes which we plucked to play ‘he loves me .. he loves me not’; buttercups or boutons d’or held under the chin to see if your friend liked butter; the heads of dandelion or pissenlit blown to tell the time and fraises des bois eaten to further sweeten summer days. Divine, simple pleasures. 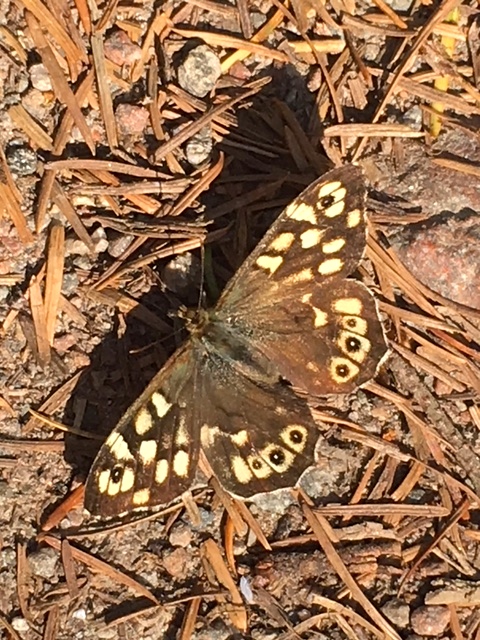 Butterflies on the forest floor 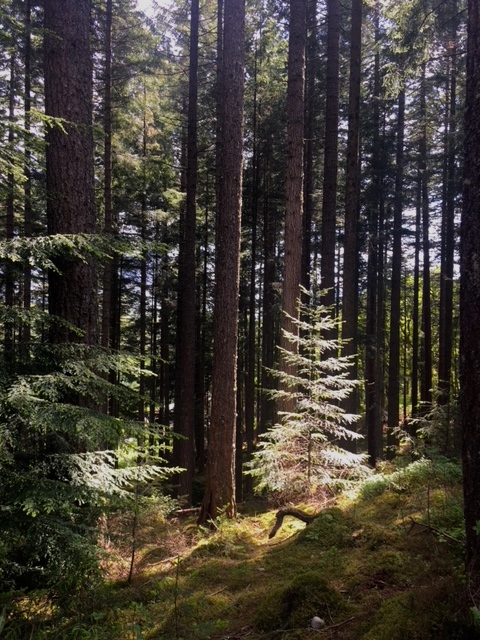 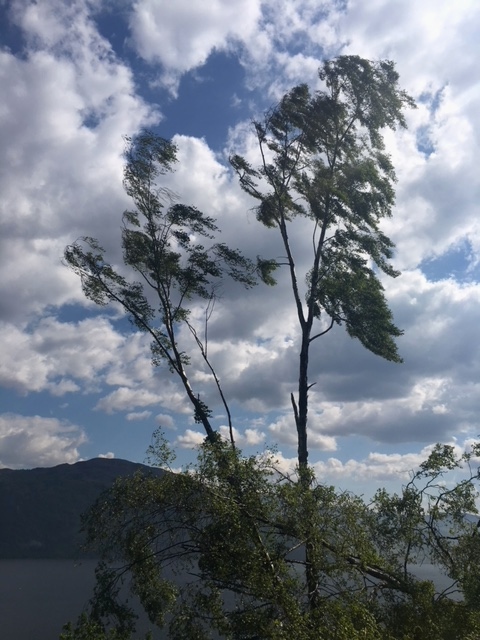 Our day ended surprisingly early at the Glenmoriston Arms Hotel. There was plenty of time for drinks and pheasant hotpot before a much anticipated and enjoyed leg massage. All in all, a faultless day. 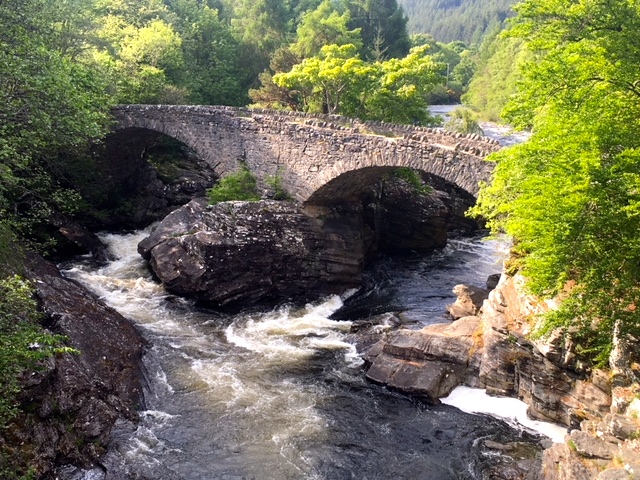 Waterfalls at River Moriston close to the hotel

Black Dog Tails
If only we all got this excited about going to work! Meet DeeDee, a contraband detection dog in Michigan. 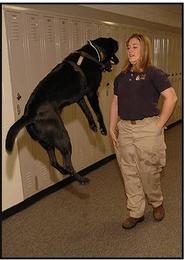