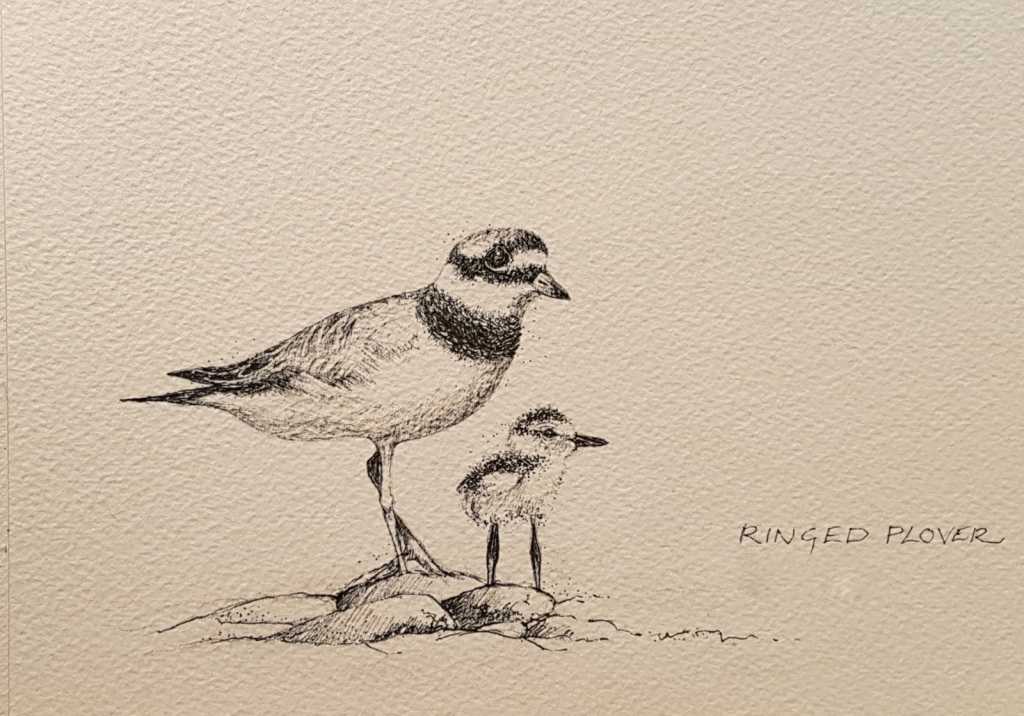 I was back on my own again this morning for the final stretch of Walking The Black Dog. My plan is to walk the John o’Groats Trail which begins in Inverness. All along I’ve felt this will be the most difficult part of the journey .. the Trail is very new and in parts not well sign-posted, according to other bloggers. It’s also boggy and there are many fences to negotiate. But the alternative is to walk the busy A9, which has precious little path for walkers. Some LEJOGers have even opted to walk from north to south so that they get this worst bit of the walk over first.

Yesterday evening the good weather showed River Ness up in its best light and I even had a grey heron performing to give me a perfect silhouette for my photos. It was a balmy evening and I was delighted that another old friend, Great Aunt Agatha, had been kind enough to make the effort and join me for dinner and a couple of whiskies .. this is a terrific new discovery of mine, the after dinner nip of Glengroin. 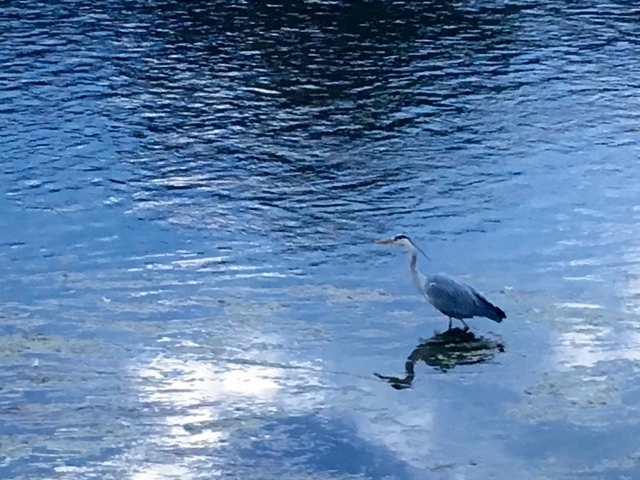 Grey heron in the evening light 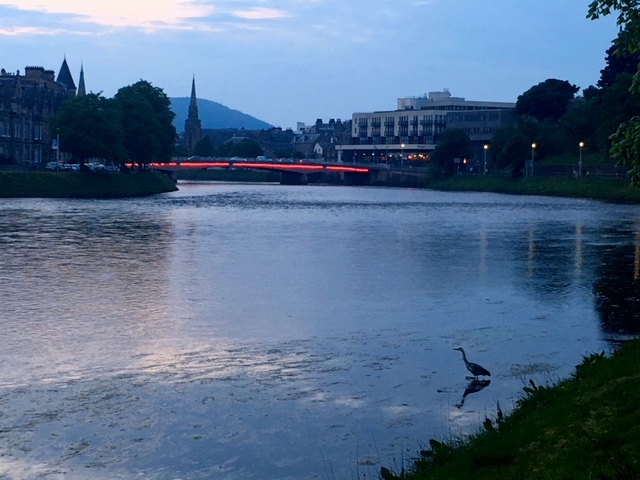 Looking north along the River Ness

Walking alongside the river to join the Way this morning, I passed a 9 foot sculpture of the Three Virtues: Faith, Hope and Charity. The girls have moved around a fair amount considering each of them weighs over four tons. They first stood on top of the Young Men’s Christian Association which was opened in Inverness in 1859. The building was demolished a century later and the virtues were relegated to a burgh surveyor’s yard. A passing antique dealer took a shine to them and transported them all the way to his garden in the Orkneys where they remained until very recently. In 2011 they made their way back to Inverness, were lovingly restored and now stand on the banks of the Ness. Faith has her bible, Hope her anchor and Charity her cornucopia. 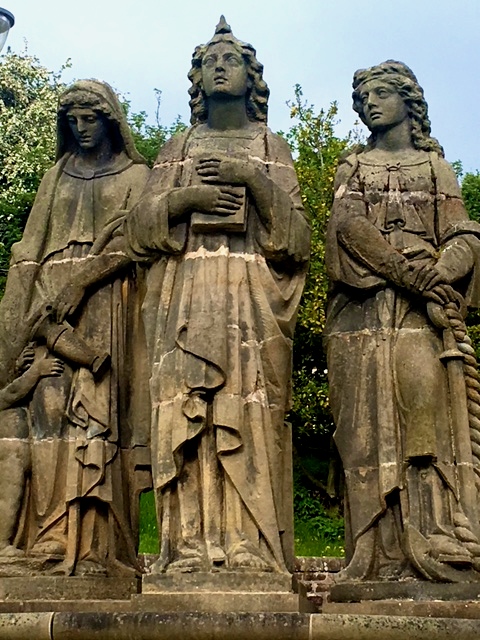 The John o’Groats Way starts in front of Inverness Castle which sits on a cliff overlooking the River Ness. The red sandstone building that exists today is just the most recent of a clutch of castles which have stood on the site. The first was supposedly where Macbeth murdered Donald I of Scotland, way back in the 11th century. A large, bronze statue of the spirited Flora MacDonald stands in front of the castle. You’ll remember she was the woman who heroically rowed Bonnie Prince Charlie over to Skye. Looks to me as if Katie Perry took some wardrobe advice from Flora. 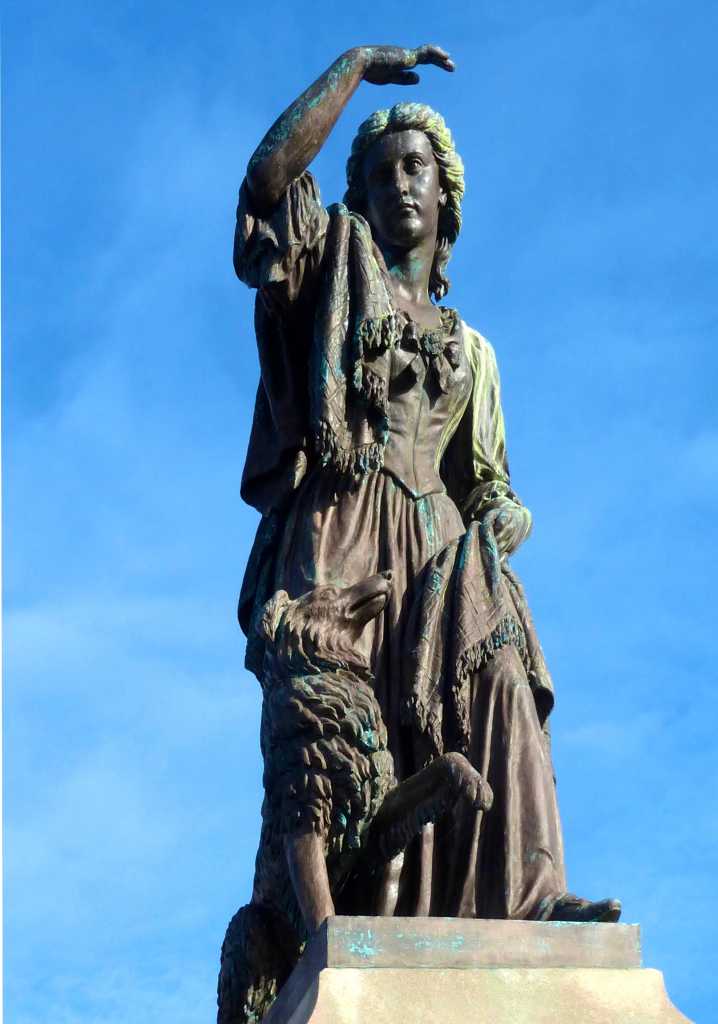 I planned to follow the river out of Inverness and then use the kilometre-long Kessock Bridge to cross over the Beauly Firth … in Scotland a firth is an inlet or a loch. Before I climbed up to the bridge however, I came across this curiosity, in amongst the warehouses and storage containers of the industrial estate. Cromwell’s Clock Tower is all that now remains of the Protectorate’s fort in Inverness. The fort, which became known as the Citadel of Inverness started in May 1652 and was comleted in 1658, the year of Cromwell’s death. When it was built it accommodated a garrison of around 1000 men. But it didn’t stand for long and when Charles II came to the throne in 1660 he was pressurised by the Highland clan chefs that all citadels in Scotland built by the English be demolished and the soldiers who were stationed in Inverness be sent home. The citadel’s life was short-lived .. it was demolished in 1662. 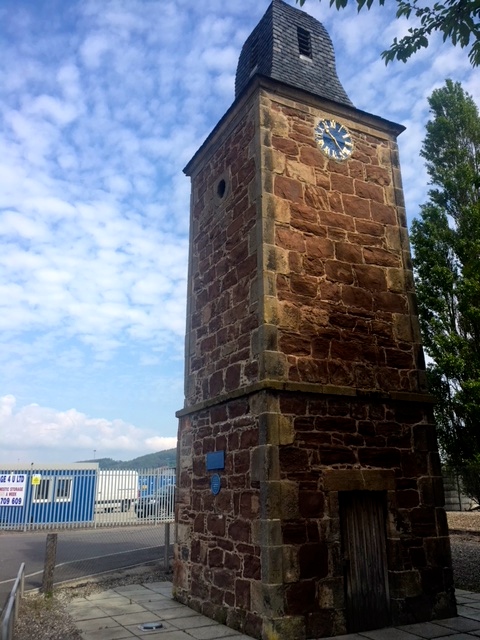 When the Kessock Bridge was built it took the place of the ferry which had crossed the water since the 15th century. Were it not for the bridge my walk would have been substantially longer today. It carries the A9 .. my first brush with the road that so many walkers have developed such a loathing for during their End to End walk. And wow, it was busy. There was a chance of seeing dolphins below in the water, as the Dolphin and Seal Centre is close by but sadly today they were all taking their swims elsewhere. The Black Isle, the Moray coast and Loch Ness could all be seen from the bridge. 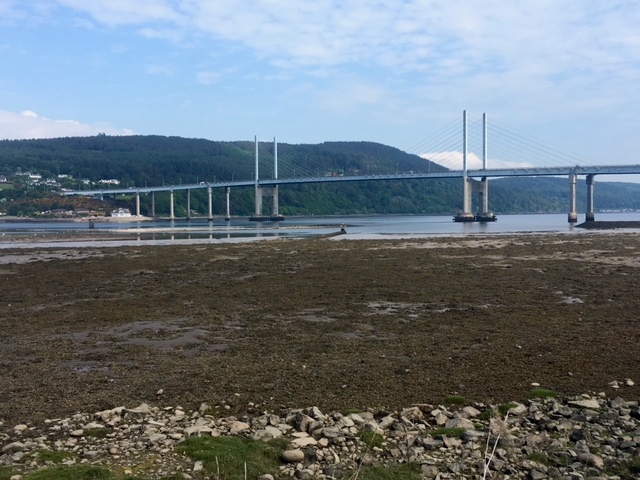 If the bridge looks at all familiar to German readers it’s because it was largely based on the Rees Bridge over the Rhine at Dusseldorf. It was designed to withstand wild Scottish waters and winds of up to 99mph, as well as accommodate potential movement of the Great Glen fault in its northern abutment. This was achieved by the addition of two 400 tonne hydraulic buffers. Today, with the sun shining, it looked very attractive. And the views from the bridge were equally lovely. 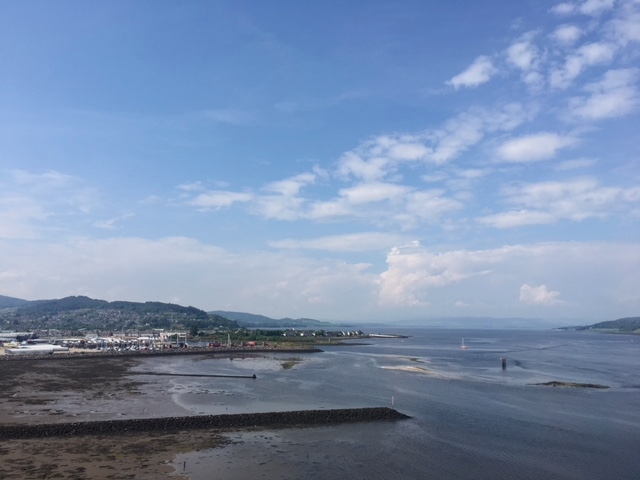 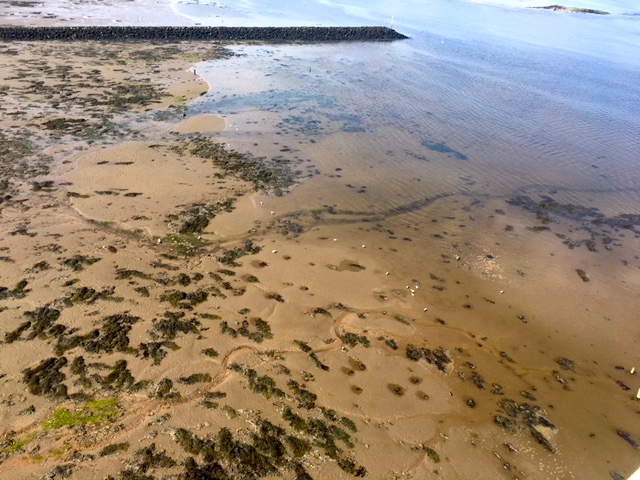 The Estuary beneath the bridge

Having no idea of the great treats that were to happen later in the day, my spirits started to flag after I crossed the bridge. I’ll admit to feeling a real misery-guts as my foot hurt more and more as I plodded on. During my rest day I’d been to A&E at Inverness Hospital to check it out. Stress fractures had been ruled out by the X-Ray but the doc confirmed it was definitely plantar fasciiitis. The treatment? Rest. Terrific. Apart from icing, stretching and anti-inflammatories there wasn’t a lot else that could be done. But the good news was that I was not going to be doing any irreparable damage by carrying on with the walk .. just incurring a longer recovery period. Rather stupidly at breakfast I took a couple of cocodomil .. a combo of codeine and paracetemol. By the time I was crossing the bridge I felt exceedingly tired and was probably not walking in the straightest of lines. At which point the good Samaritans Kate and George intervened. ‘Are you OK, dear?’, asked Kate at the service station … ‘only I’ve been watching you walking and you don’t look very well’. Cutting a long story short the two loveliest of people took me back to their home, made me tea and fed me avocado on toast, while I rested my foot. Listening to their stories, I realised I was only one in a long line of waifs and strays they’ve picked up and revived over the years .. including cats, dogs and humans. I will remain eternally grateful to them.

Watered and well fed I continued on my way to Munlochy, feeling considerably stronger. Rather aptly there’s a wonderful Clootie Well at Munlochy. It’s a healing well which was dedicated to St Boniface. Although he was the patron saint of Germany, Boniface was born in Devon. All around there were colourful rags or ‘cloots’ hanging from trees. It’s said that pilgrims would come to hang a piece of clothing belonging to a sick relation or friend, in the hope of curing their illness. Before tying the clootie to the tree, it would be dipped in the well. It was important only to ask for help with a long-term illness as the cloth disintegrated at the same pace as the sickness was cured. And woe betide anyone stealing a cloth .. they would be visited by the very same ailment that had sickened the original pilgrim. Somehow I forgot to take a photo of the scene but here is someone else’s picture ..

The route today took me through many woods: Drumsmittal Wood, Schoolhouse Wood, Bellton Wood, Upper Knockbain Wood and finally Culbokie Wood beyond which is Culboke, which was my destination for the evening. Culbokie is a village whose name means ‘the haunted nook’. It’s a small village on the north side of the Black Isle named either because it never snows there or because the soil is particularly fertile .. take your pick. Either way the Black Isle is not an isle, being firmly attached to the mainland in the west, although surrounded on three sides by the Cromarty Firth to the north, the Beauly Firth to the south, and the Moray Firth to the east. All names beautiful when spoken aloud with a Scottish accent. The Black Isle was one of the earliest parts of the northern Highlands to experience the clearances .. more of which later .. and was settled with many Lowland shepherds and farmers, especially from the north east. In addition to its Gaelic heritage, the Black Isle also had its own dialect of North Northern Scots, used mainly among fisherfolk in Cromarty, which became extinct in October 2012, when Bobby Hogg, the last native speaker died.

The route between Munlocky and Culbokie was very pastoral and unbelievably green with a strong equine flavour. 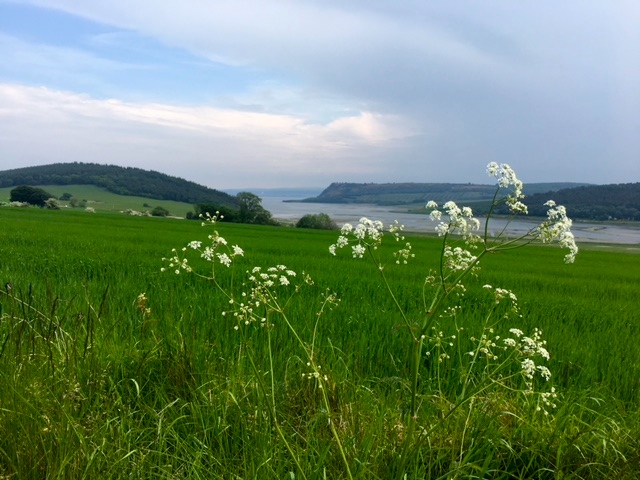 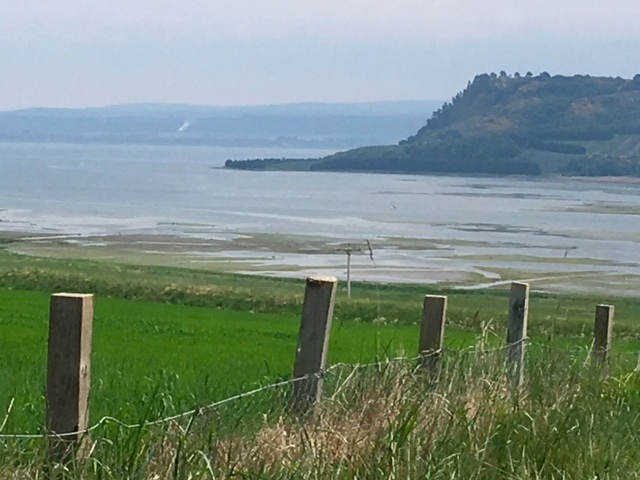 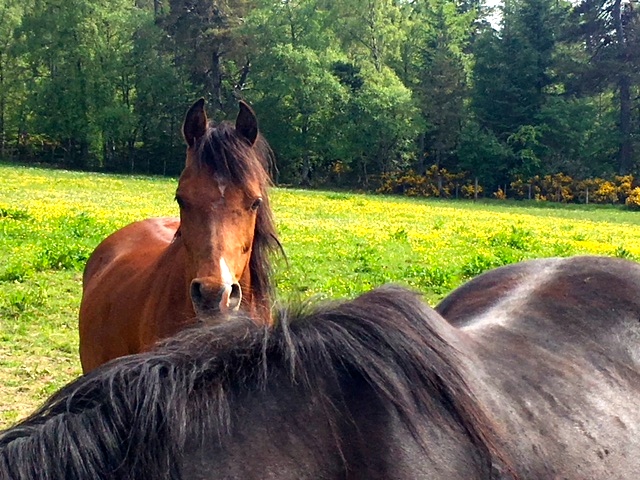 Fields and fields of horses

My stop for the night was just a little north of Culboke: Netherton Farm B&B. And what a treat awaited me there! Nine black labrador puppies, just five weeks old! All utterly adorable and just as keen to get into my rucksack as I was to kidnap them! 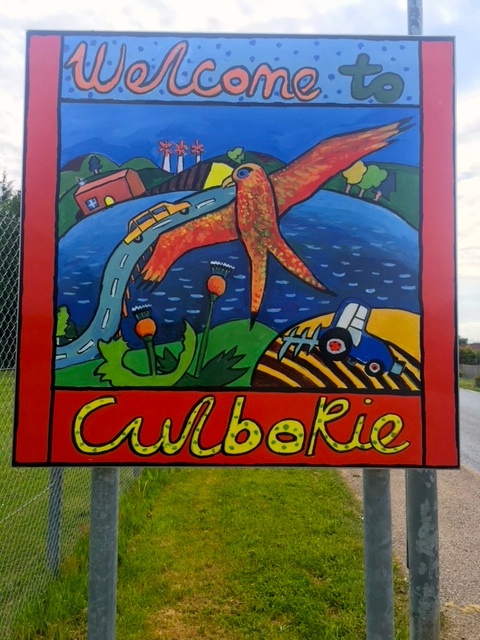 Welcome to the village 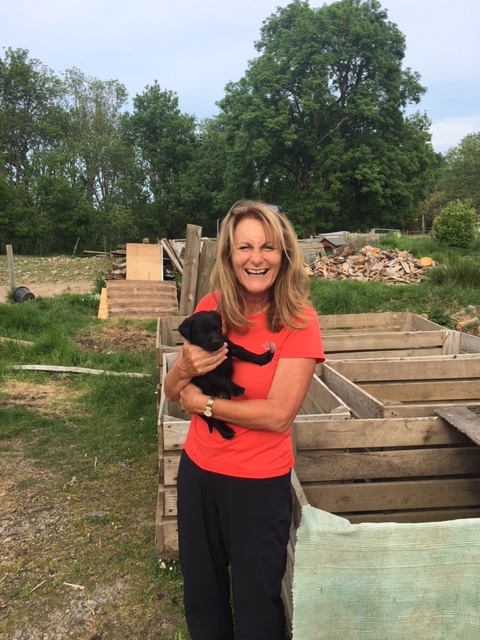 How happy am I!

The very kind owner of the farm zipped me up the road for me to have my dinner at the local pub. Sending off pictures of the adorable pups to friends, I had my head well buried in my phone. And then to my total disbelief I heard a familiar voice saying, ‘I thought I’d find you in the pub’. It was Gus, our son .. travelled all the way from Sydney to surprise me!! My mouth must have stayed open as I remained speechless for a good few minutes, entertaining all the punters in the pub. I have NEVER been so surprised .. well, not since my husband pitched up in Westard Ho!   What a day. I am in total heaven! 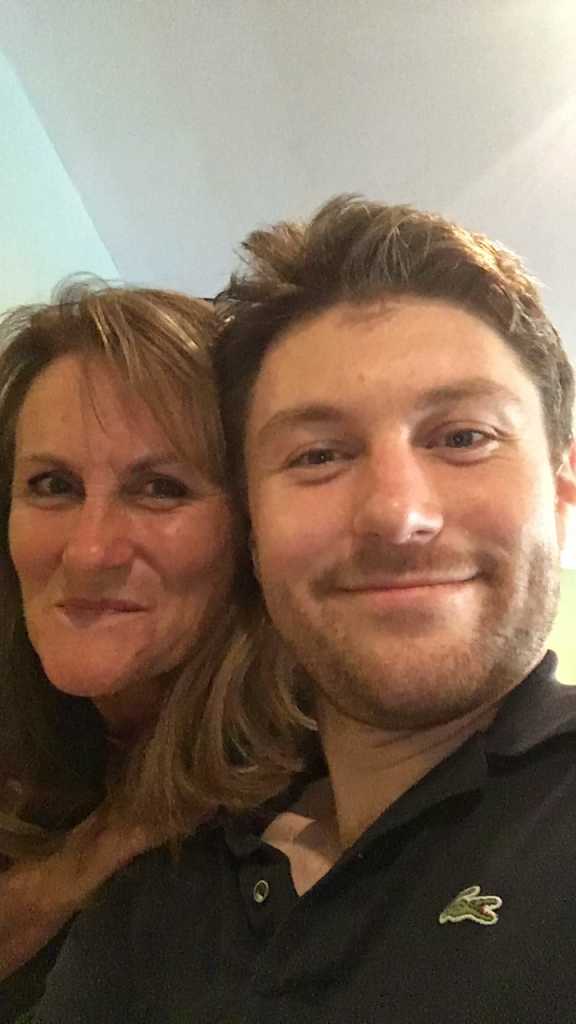 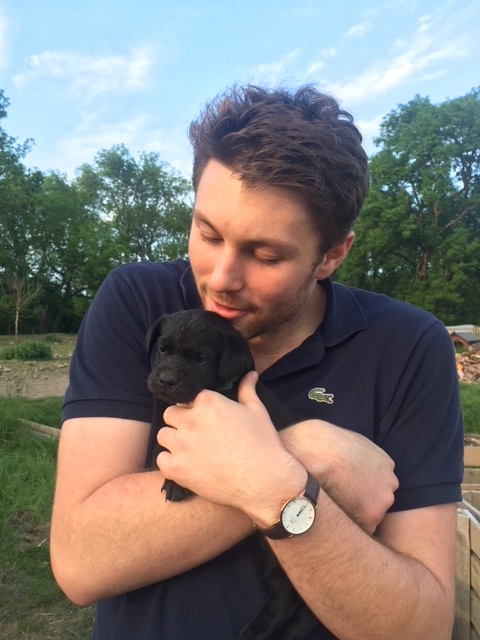 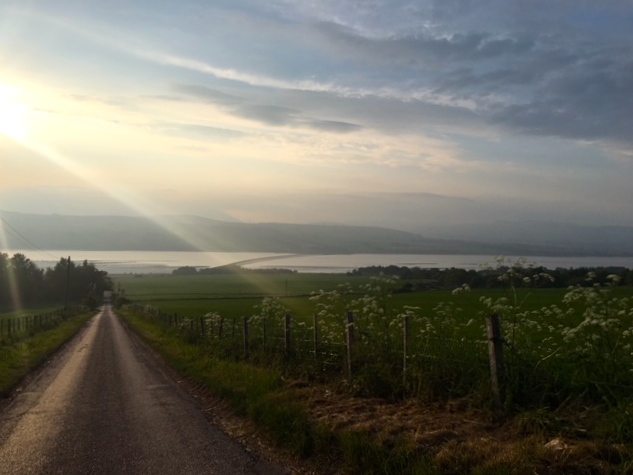 Black Dog Tails
Service Dog Avalon is a huge help to Monica Johnson who has a spinal cord injury. 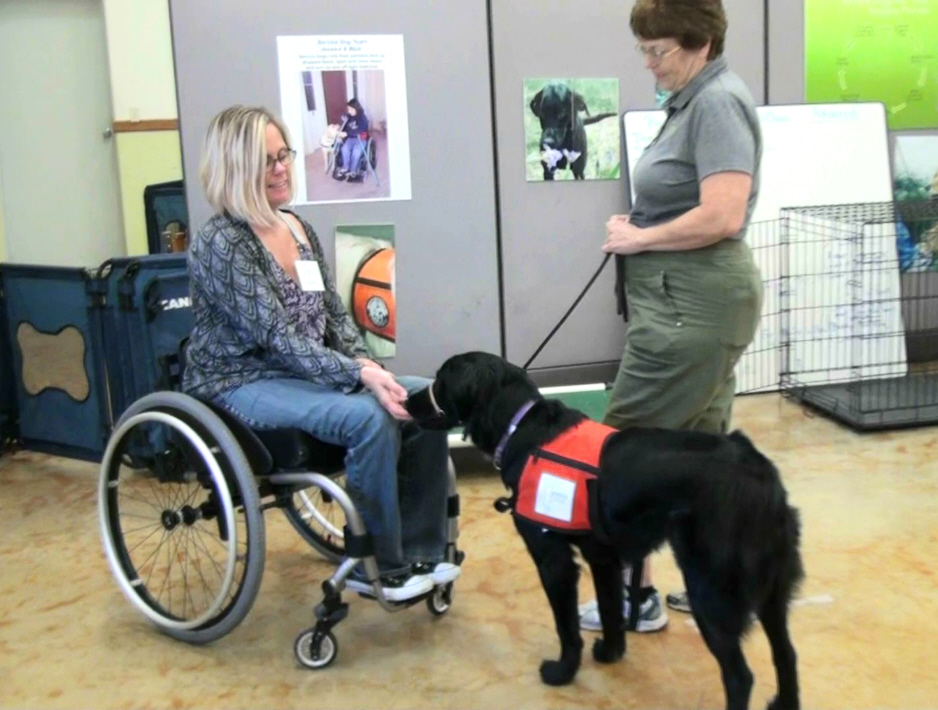