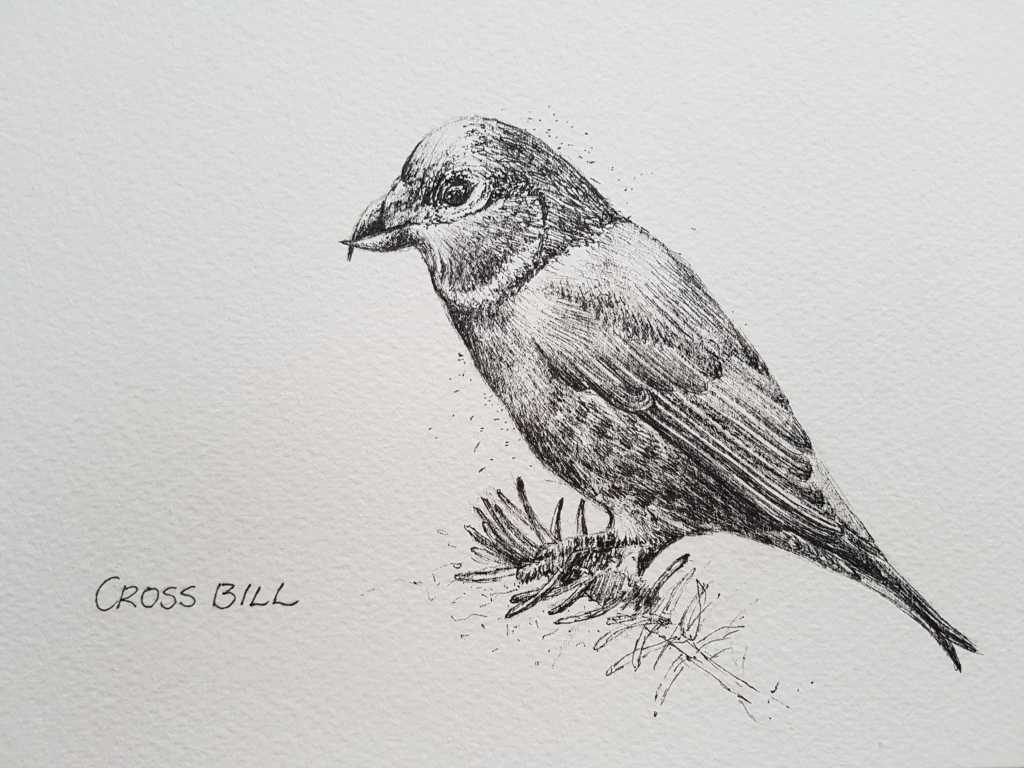 I really do not know why I left myself with such a long day’s walk for yesterday. Maybe I thought the adrenaline would have kicked in at getting close to the end, maybe I thought I’d be super fit and injury-less. Anyway, yesterday was a bit of a bugger.

It started with waving Gus off at sparrows. I was so sad to see him go .. it’s a long time since we’ve spent so much time alone together. He’s the easiest of company and we had space for both frivolous chats and serious conversations about everything under the sun. I will always treasure his gift of coming over from Sydney and giving up one of his three weeks annual holiday, to help me negotiate my way along the John o’Groats Trail.

As the son left, so too did the sun. For my first time in Scotland the rain started to fall and there was a heavy mist blocking the view of the Moray Firth. There was the choice of sticking to the Trail (‘Challenging walking; volunteers have built some stiles and marked the route with white paint daubs where land-owners have permitted, but there are still barbed wire fences to cross, three ravines to negotiate and some rough, overgrown and tussocky going on the clifftop. Care needed with navigation) OR reverting to the A9 and peeling off on to the A99 after Latheron (hard tarmac, lunatic drivers and dull scenery). 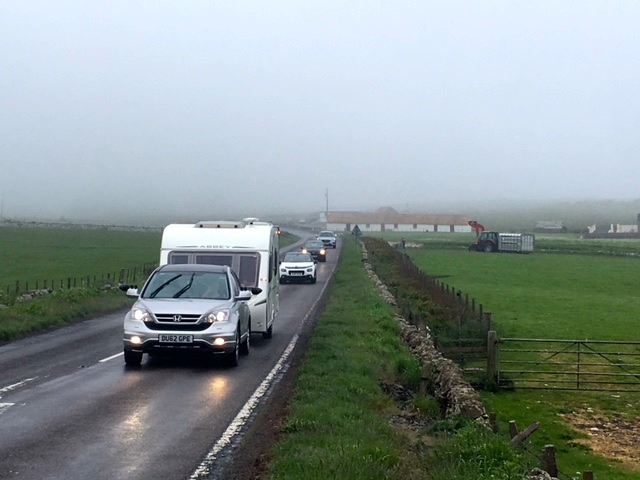 Delights of the A9

Knowing the views would be virtually non-existent from the Trail, I opted for the road, thinking I could chew up the miles quickly and arrive in time for afternoon tea at the promising-looking Thrumster House, my accommodation for the night.

Just a mile down the road I came across a farmer marking his sheep after they’d been shorn. It was a job which had to be done quickly as the sheep didn’t enjoy being so tightly enclosed and in an attempt to get free they were scrambling all over each other. The farmer explained that he was also taking the opportunity to spray them for ticks. It was something I wished I’d done myself a couple of days ago. I’d found several of the blighters clinging to my legs, after all the bracken-bashing of the day. 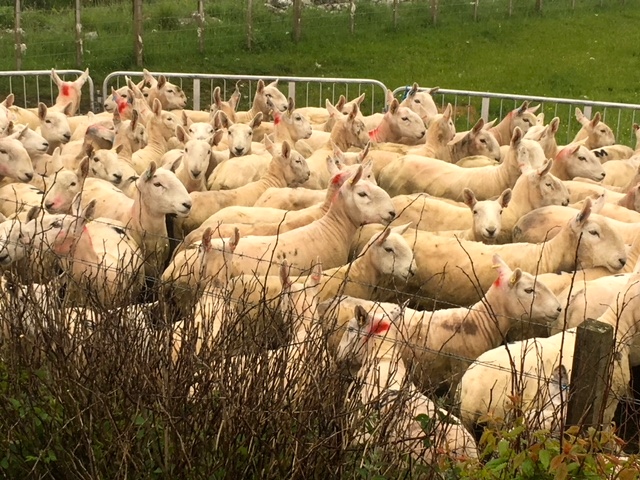 Waiting to be numbered .. 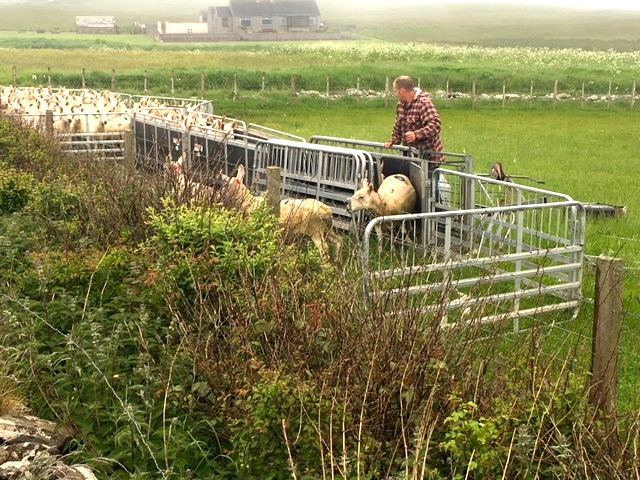 .. getting the farmer’s attentiion 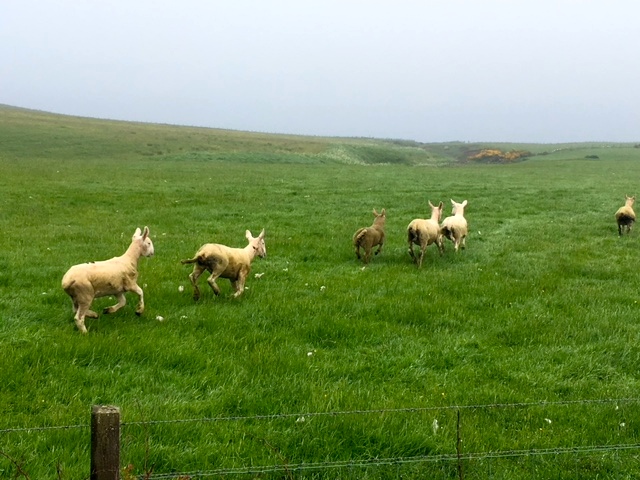 .. and racing to freedom. Yay!

It was an atmospheric sort of day with the mist. In every direction there was a blurring of trees and houses and the distant hills. I kind of like this look, so was happy. I picked up sandwiches and decadent cakes from the nearby cafe. There I got chatting to a couple of punters who were driving their vintage cars up to John o’Groats. Ahhh. That explained the Morris Minors, Cortinas and Morgans being driven past at a stately speed. 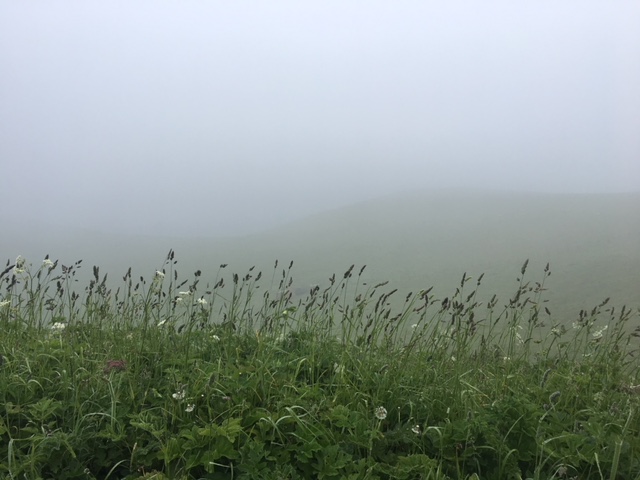 Looking out to the coast

Lybster was once an enormous herring fishing port employing 1500 people but now, far more appropriately, it’s lobster that Lybster mainly catches. The ill-timed Wick and Lybster Light Railway was built just too late to profit from the industry. It’s an attractive village with a striking harbour and a main street that is so wide it could afford shoppers to triple park their cars, while they nip into the grocer’s to buy a pint of milk. Not that there are enough cars really in this remote part of Scotland. Lybster was a planned village, created by local landowner General Patrick Sinclair in 1802. In years to come his sons fought in the Battle of Waterloo and in their honour he named the crossroads on Main Street ‘Quatre Bras’. 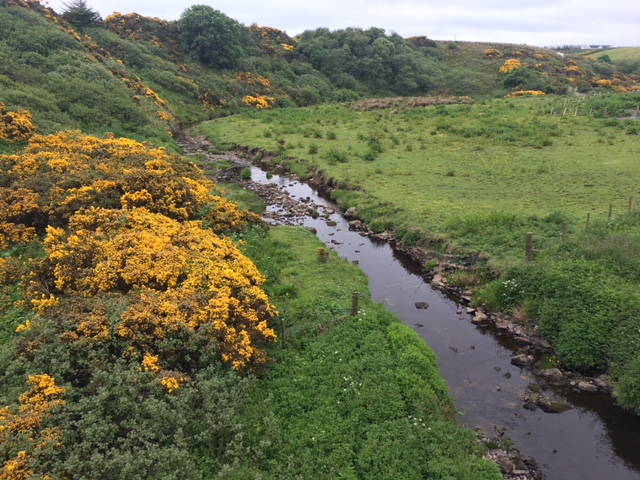 The village is well-known in Caithness for hosting the World Championships of Knotty, a variant of shinty. Knotty uses a stick (a knotty), which can be almost any form of wooden implement, and a cork fishing float as a ball and teams have varying numbers of players. Local history has it that the fishermen’s wives invented it to help keep their men sober when they were ashore, after fishing for herring. With the decline of the industry knotty fell into abeyance until local hotelier, the late Bert Mowat, found a copy containing the few rules of the sport wedged between the pages of a Gaelic bible in a bedroom. In 2006 it was thought the lack of traditional cork floats might be a threat to the continuation of the sport. Sadly the Portland Arms Hotel is closed for renovation so I was unable to ask whether herrings and cork have eventually knocked knotty out of the world arena of sport.

All along the way yesterday there were crumbling ruins of stone houses only just surviving from another century. They stood lonely and isolated in fields or had small clusters of grey single-storey, pebble-dashed houses around them .. with no effort made to incorporate them sympathetically. Many of the yards had rusting old caravans abandoned to the ravages of the salty sea winds. Ugly disused farm machinery often completed the scene. Throughout my 17 miles of walking I saw virtually no-one. No-one tending their garden, washing their garden or talking to their neighbour over the fence. It made for a desultory, tumble-weed sort of mood. 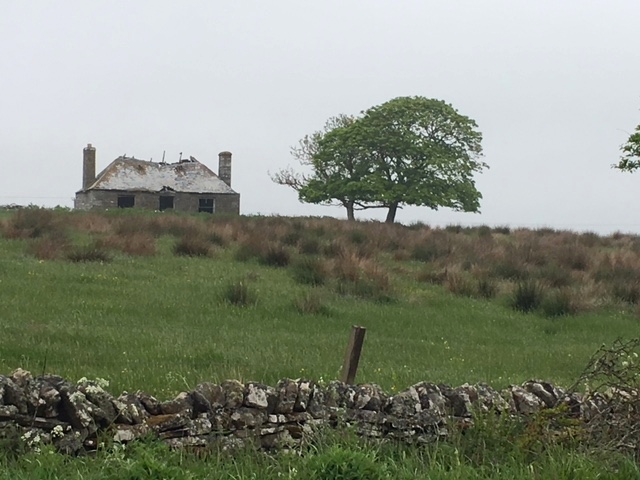 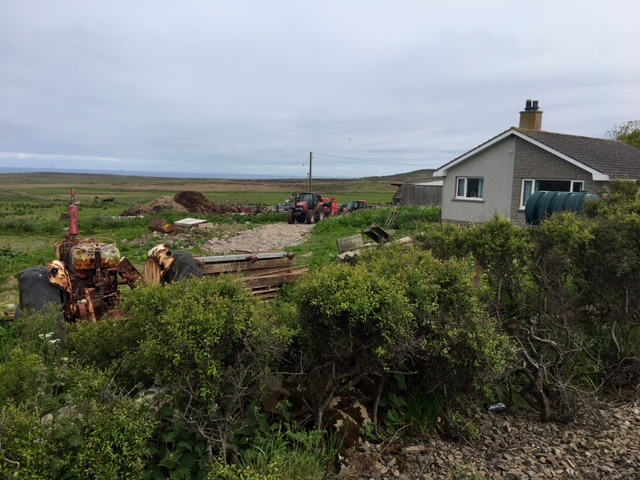 Despite all this, the names of points and headlands along the coast were lyrical: Muckle Roberry, Wester Stack of Ulbster, Creag-a-backy and Black Skerry to name but a few. Impressive sea stacks, caves, natural arches, blow holes and toppling cliffs abound, making for dramatic scenery .. but as I was walking the A9 I saw nothing of them. There were no signposts for roads or even paths leading down to such would-be tourist attractions. Just after Clyth Harbour the red and white striped Clyth Lighthouse came into view across the fields. I decided to ignore the sign indicating it was a private road to take a look. There’s a similar lighthouse in Sydney, called Hornby. Its stripes are vertical and I did a drawing of it for the post ‘3 months to go’, ahead of the walk. It seems such a long time ago. 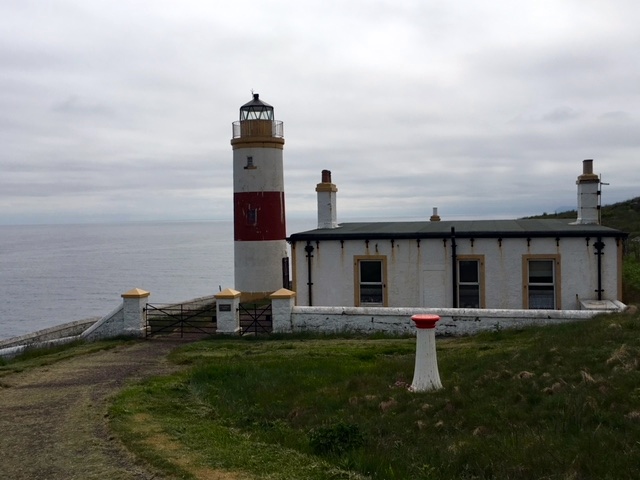 Beyond Clyth I had been looking forward to seeing the signpost for Whaligoe Cafe. It stands at the top of Whaligoe Steps, an amazing feat of engineering: over 330 stone steps lead down to what was once a thriving fishing port built in the mid 18th century. Herring, haddock, ling and cod were landed there, gutted and carried up the steps in creels by a small army of women and taken to market by foot in Wick, 10 miles or so away. There was a cooperage at Whaligoe as well and barrels of salted herring were packed onto boats and exported from the harbour. Regrettably I only reached Whaligoe after cafe closing time and so missed the buttery galettes which are recommended on social media.

From Whaligoe it was another three miles to Thrumster. I walked past a cliff-top graveyard and views to the west of a windfarm .. but little else of note. 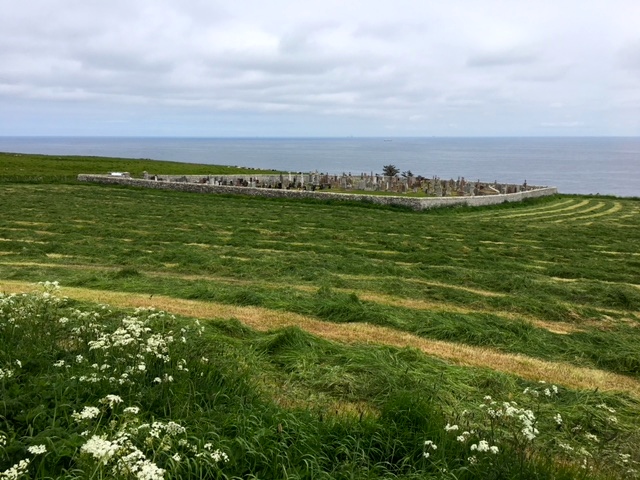 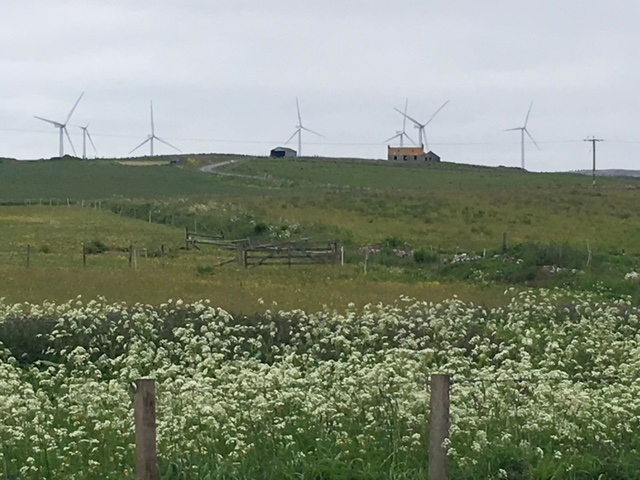 Windfarm in the distance

I felt overwhelmingly weary as I came to the turn off for Thrumster House. Walking past the lodge at the gateway and down into the long, long drive it felt as if I was entering another world. The day had been never-ending and dull and it had taken an enormous effort to just get through it. Even though I have only two days left of the journey, yesterday felt like an eternity .. and anyone who knows me well, will know just how much I fear eternity. 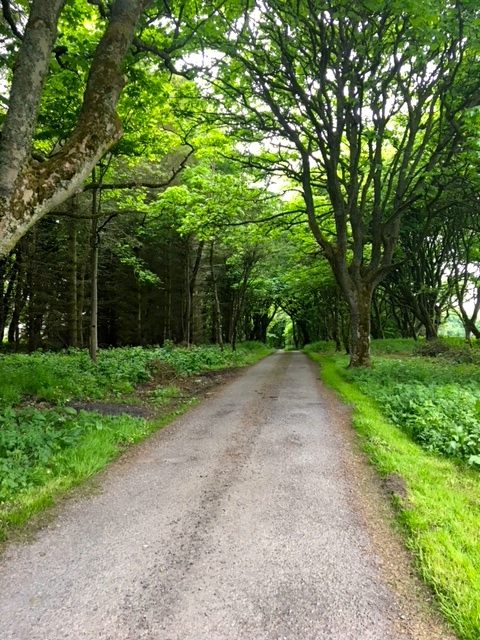 The welcome I got at Thrumster House completely turned that all around. A log fire, the warmest of country houses, a friendly, welcoming hostess and DOGS .. a Black Flat-coat Retriever and an English Setter .. all helped me to leave the vagaries of the day behind. How lucky was I.

Black Dog Tails
Chuckles .. my everyday hero .. I thought about him heaps today. I still miss him. 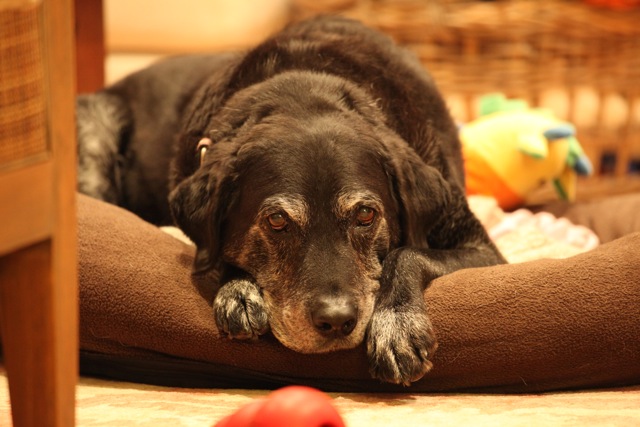