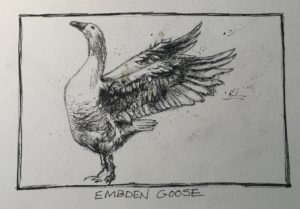 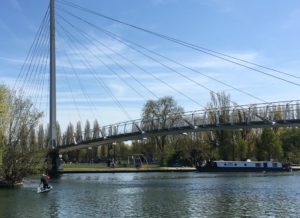 Setting out on Day Eight, I could not have been cleaner, better watered and fed nor more pampered and cared for. Cara and Hobey had gone well beyond the call of duty by taking in this weary walker and thoroughly revitalizing her. Thank you both.

Cara dropped me at the exact spot we had finished the day before. I was clearly in Great British Bakeoff territory as my first sighting was a barge called The Soggy Bottom. Very silly and apt! And then another boat to make my mother happy .. 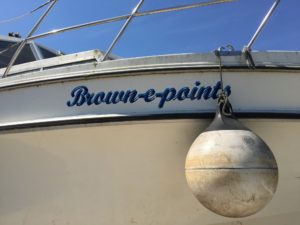 One for my mum!

There were more new families to be seen along the banks, making me very happy. 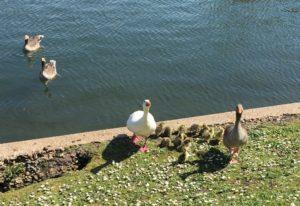 Protective Embden geese along the footpath 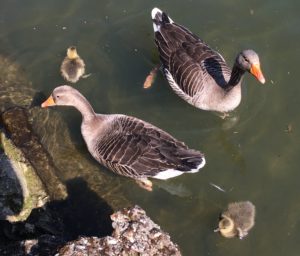 Around Tilehurst the river became quieter with few houses and fewer people walking their dogs. 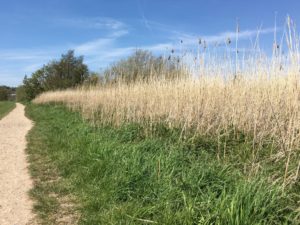 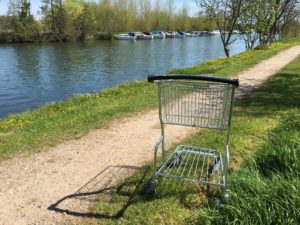 They just get everywhere ..

In fact, for a mile or so the walk was lonely and there was a neglected feel to the walk, with a railway cutting to my left. High speed trains roared past every few minutes and I began to recognize the unloved section written about by other Trail writers. Nevertheless, I was soon upon a big landmark for me .. the halfway mark of the Trail. 92 miles walked and 92 to go. There is a hotel here called the Roebuck which I can’t say I would ever be tempted to stay in, given the dilapidated state of the sign and it’s close proximity to the train track. (It would have been the ideal place to stay when Gus was going through his big train phase, of course!) 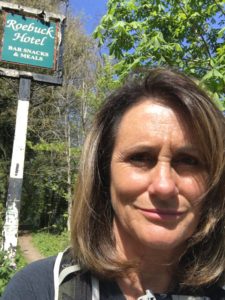 Half-way point at the hotel

At this point, the trail takes a big detour through a housing estate in Purley. It’s hilly and I’m eager to get through to Mapledurham Mill and Lock, the next landmark on the map. 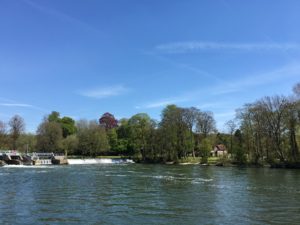 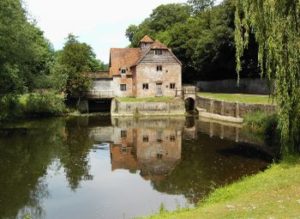 The house has been owned by the same family since it was bought by Richard Blount in 1490. In fact, it is still a working mill producing high-grade flour. It’s mentioned in the Domesday Book and also has the distinction of being thought of as the model for Toad Hall. 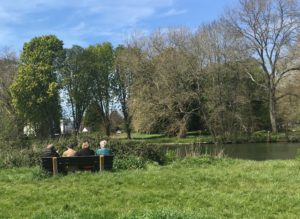 Really .. a view of the hedge when you could be looking at the river??

It’s a couple miles before I reach Pangbourne and Whitchurch, two villages separated only by a bridge over the river. Pangbourne was home to Kenneth Grahame, author of ‘The Wind In The Willows’, which tells the story of Ratty and Mole who love nothing better than to ‘mess about on the river’. The third character is the wayward Toad, who spends his life getting into scrapes, which the other two must rescue him from. Grahame was actually (yes Kit, actually) a banker whose imagination was clearly wasted working as a teller. 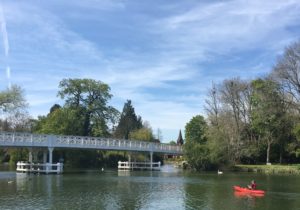 Bridge between Pangbourne and Whitchurch 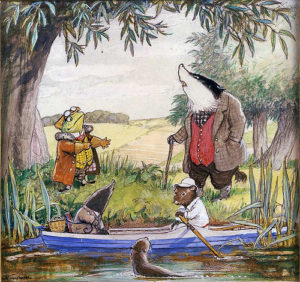 Messing about on the river

Pangbourne is also noteworthy for its pub, The Swan and the fact that it was here where Jerome, George and Harris finally called it a day on the river, saying ‘Sod this for a game of soldiers’ and went home! 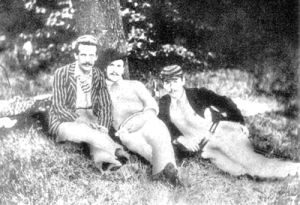 Jerome, George and Harris throw in the soggy towel

The bridge between the Neolithic Pangbourne and Whitchurch is one of two toll bridges still operating on the Thames. I get excited at the prospect of handing over my tuppence ha’penny but am told it’s only cars that need to cough up 60p for the pleasure of crossing the river here. 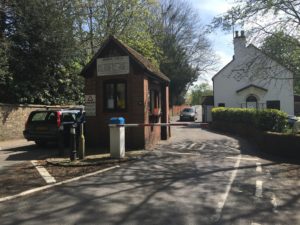 Onwards and upwards. In fact rather too much upwards for my liking, even if there are distractions along the way .. 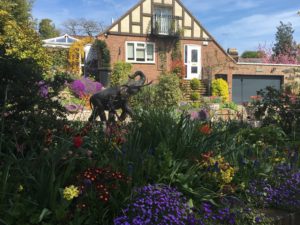 Polar bears and now elephants in gardens. Suspect it’ll be giraffe and warthogs next!

The path climbs up high to skirt around Coombe Park. 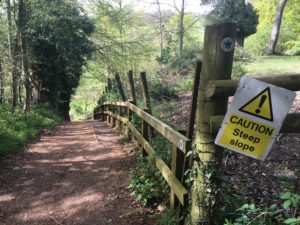 Didn’t sign up for these steep bits on a river walk.

There are compensatory views of the river from the wooded areas above. And then the path descends and there are fabulous places for pink gins on a summer evening. 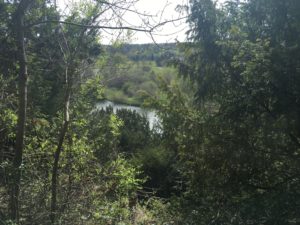 Viewing the Thames from Hartslock Wood 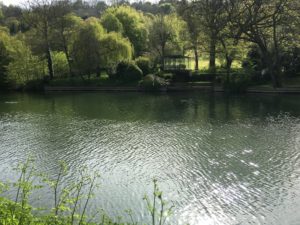 I’m fast approaching another coupling of villages across a river bridge: Goring and Streatley. There’s evidence of a Neolithic settlement and the Romans certainly set up camp here. There’s a lock and its accompanying weir, which make for a very pleasant view from the Swan pub. However, I have booked to stay at The Bull in Streatley, where in the 15th century a nun and monk were discovered having inappropriate relations and were rather harshly executed for their misdemeanor. They are ironically buried together under a yew tree in the garden at the pub .. death clearly not parting them! 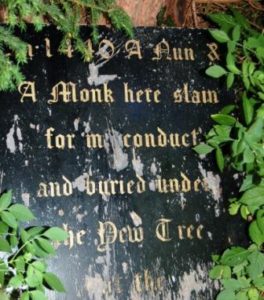 There was just time for a quick soak before my elegant lift arrived to take me for supper at the Swan, at the bottom of the hill. 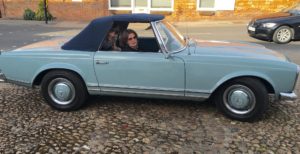 Cara and Kit in the beautiful Horizon Blue Merc 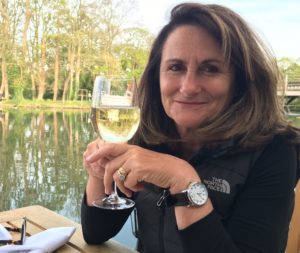 Drinks at The Swan at Streatley in the evening sun by the river .. A fitting way to end the day.

No need to ask about dog of the day .. it had to be a Hobart girl. I should like to have assembled all of them to be in the photo but that was just not going to happen! 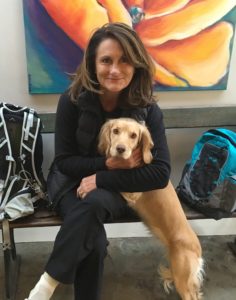