Oxford from Port Meadow by my father, Keith Johnson 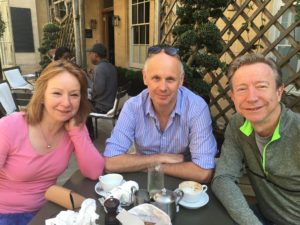 Breakfast with Patrick, Joanna and Nick

My rest day in Oxford on Sunday was delicious. There was breakfast with Patrick, Nick and Joanna in the sunny courtyard at Old Bank Hotel, followed by a saunter around the Covered Market, a long nap .. and then a light but exquisite dinner with Anne, again in the courtyard, with the sound of the bells of various college chapels in the background.

Walking from Oxford to Newbridge, I had a marathon runner by my side! Time to stop any whinging about blisters or aching muscles. Still, even an impressive athlete needs her breakfast, so we started the day with Old Bank’s best omelettes and coffee. 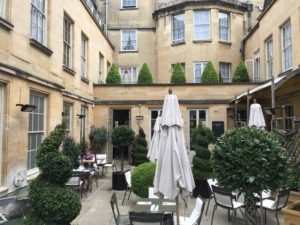 Quod at The Old Bank

To return to Folly Bridge we had to go past Oriel College, with its controversial Rhodes statue on St Aldates and a relief sculpture of the man inside college. 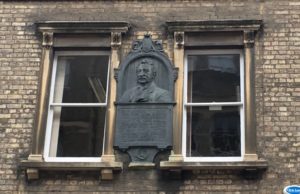 And then past Christchurch Gardens, looking green without their spring bulbs and still waiting the summer bedding plants. 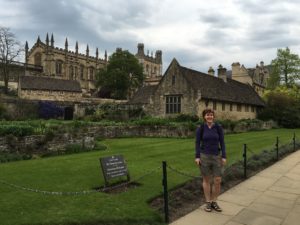 The Head of the River was unable to tempt us today and we strode across Folly Bridge, where once there was a wooden Saxon bridge. Over the years there have been various names for a bridge on this site .. South Bridge, Grand Pont, Friars Bridge (after Roger Bacon, a Franciscan Friar), Welcome’s Folly and finally Folly Bridge.

We continue on the path west past an eclectic and mostly attractive string of riverside homes. 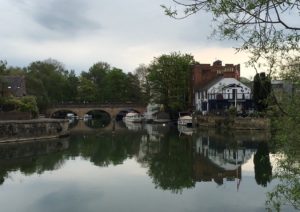 Folly Bridge from the west

The tow path was teeming with cyclists, which made single-file walking a necessity until beyond Osney Bridge, the lowest on the river. Chatting is a little difficult for the time-being but once again, there is plenty to distract. We were both moved by the quiet little memorial to the selfless Edgar Wilson. And then my mind was flooded with memories of Patrick’s time at Osney as we passed the lab where he used to work. Fittingly enough, close by there was a boat moored up to the towpath called ‘Lord’ .. doubt it was owned by Peter Lord but it was fun to see, nevertheless. 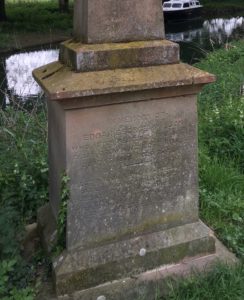 ‘In Memory of Edgar George Wilson, who after rescuing two boys from drowning lost his life, June 15 1889, aged 21 years.’ 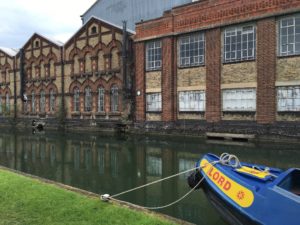 Beyond Osney the path is even and tree-lined before it gives on to Port Meadow, with its views of the dreaming spires. We were startled at one point to have a small herd of cows walking towards us, with no sign of a herdsman. They appeared to know exactly where they were going, although the notice on the gate ordering for it ‘never to be left open to avoid cattle escaping’ was a little alarming. As we were considering what our course of action should be, a man on a moped appeared on the path, urging the last recalcitrant cows onwards! 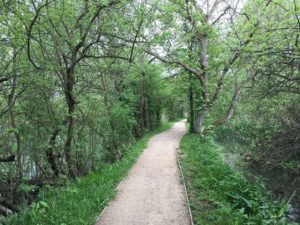 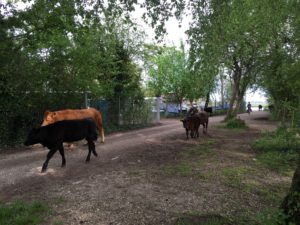 Port Meadow separates the river from the town and is an ancient area for grazing, still used by horses and cattle. It must have been painted a million times and I’m really happy to be able to include one of the watercolours that my own father created of the tranquil scene, many years ago. It is said that as a reward for helping to defend the kingdom against the marauding Danes, the Freemen of Oxford were given the 300 acres of pasture next to the river by Alfred the Great.  The right of these men and their descendants to graze their cattle free of charge, is recorded in the Domesday Book. It’s thought that the meadow has remained unploughed for over 4000 years, without the use of pesticides or fertilisers. The profusion of wild flowers on Pixey and Yarnton Meads is a sight rarely seen. 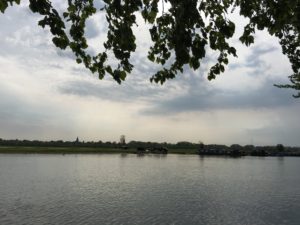 Port Meadow from the river

We pass the turning for Binsey on our left, even though the village and in particular, The Perch Inn are tempting. As Port Meadow recedes we come to the lock at Godstow, where there are the remains of the Nunnery. Naughty nunnery I should say. Once upon a time, Godstow Nunnery boasted a magnificent church, courts, cloisters and a chapter house. Sadly, all that now remains are the outer walls and the ruins of the abbess’s private chapel. However, at one stage it was a hotbed of scandal. Henry II met the demure Rosamund Clifford here, who became his mistress and bore him two sons. The plaque at the ruins goes on to say that, ‘later the place became  notorious for its “hospitality” towards the young monks of Oxford.’ Aha! Say no more! 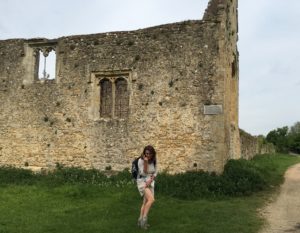 The Naughty Nunnery at Godstow

Before crossing the bridge at Godstow to take coffee at The Trout, we came across another touching plaque .. 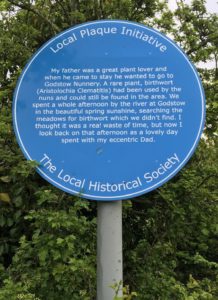 Great initiative set up by The Local Historical Society

‘My father was a great plant lover and when he came to stay he wanted to go to Godstow Nunnery. A rare plant, birthwort (Aristolochia Clematitis) had been used by the nuns and could still be found in the area. We spent a whole afternoon by the river at Godstow in the beautiful spring sunshine, searching the meadows for birthwort which we didn’t find. I thought it was a real waste of time, but now I look back on that afternoon as a lovely day spent with my eccentric Dad.’ 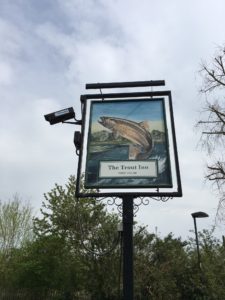 We used to visit The Trout often during the years we lived in Oxford. At that time it was a simple hostelry, serving great food by the river. It has been updated of course and is a stylish gastropub now, with none of the smoke which used to pong out all pubs before the Smoke Free Law came into action in 2007. I doubt Inspector Morse would approve of the new look but I have to say I’m a fan, especially of the fabulous Italian coffee maker they have installed. 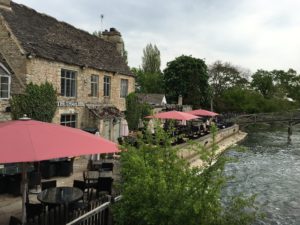 After our welcome shot of caffeine, we continue on the trail to King’s Weir, the most northerly point of the Thames. The river takes a 90 degree turn to the west and we walk through meadows and past the glorious woods of Wytham, where there are buried many of the fictitious victims of Colin Dexter’s books. The day is sunny however, and there’s no hint of the sinister side of the wood. In fact there are only signs of new life, in the form of many, many sweet lambs, gambolling and pronking around the fields. 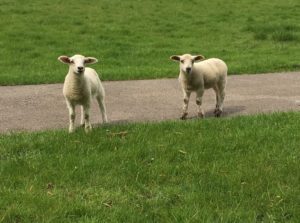 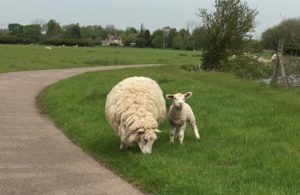 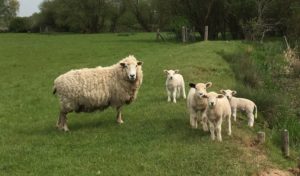 Foster mother with her brood

At Swinford we reach the second bridge across the Thames which still levies tolls. It’s an elegant Georgian balustraded bridge which was commissioned by the Earl of Abingdon in 1769, although there has been a crossing here for over 1000 years. Cars still pay 5p for the pleasure of crossing the bridge and an estimated 3 million vehicles use it a year .. not a bad revenue generator. 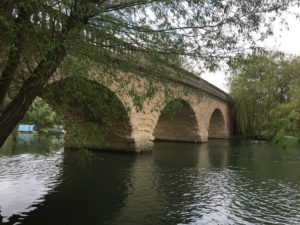 At Pinkhill Weir we have to cross the river and stand mesmerised for ages, watching a log, which no matter how hard it tries to forge its way downstream, is unable to escape the upward pull of the water. It is a wonderful demonstration of the need for the beetle, remarked upon at the pub, ‘The Beetle and Wedge’ a few days earlier on the walk. 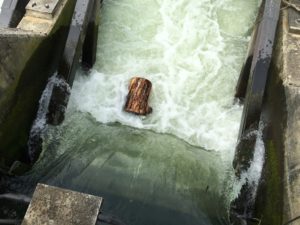 At Pinkhill the path takes us inland, with very little signage to show the way. As a result we take the scenic route and encounter yet more lambs and posing sheep. 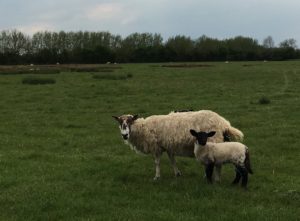 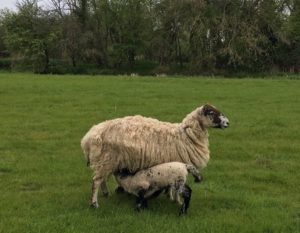 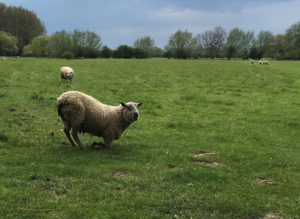 Storm clouds are beginning to gather, just as the forecast has predicted and we are treated to stunning steel-grey skies, contrasted against carpets of buttercups. 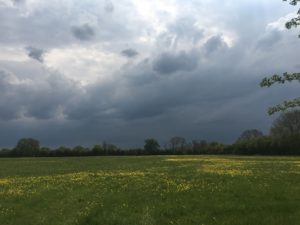 The reason for the detour away from the river is two large caravan parks, who are not keen to share the land with walkers. A bit mean in my view.

It’s been a very quiet day from the point of view of other walkers and it’s been lovely for me to have Anne’s company, as we cover a huge variety of subjects in our conversation .. from the serious to the frivolous. Few walkers has meant few dogs; in fact NO dogs at all. We realise that this is partly due to the area we are travelling through. Witney has always been a huge wool producing centre of the country with many flocks of sheep. Dogs off lead are outlawed. In my own dog-owning days, I know I should have hated walking with a dog on a leash, so I imagine that many others are discouraged from using this part of the countryside as well. This left us with a bit of a problem .. how would I select Dog of the Day? Easy. Switch to Lamb of the Day! 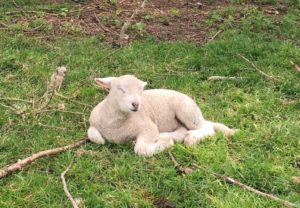 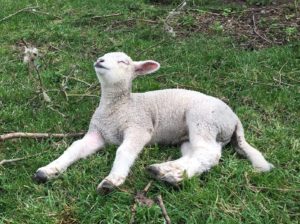 At the end of the caravan parks we took a left turn towards Bablock Hythe, where we hoped to get some lunch at the Ferryman Inn. Of all the pubs along the Thames, this was the most unattractive and the least welcoming, I had encountered. After begrudgingly being offered a packet of crisps by the landlord for lunch, we decided to spurn The Ferryman and continue on our way, hungry and thirsty.

Bablock Hythe is however a very interesting place on the river. It is one of the most ancient crossing points of the Thames, dating back to Roman times. I’m sure in Caesar’s time we would have found a gargantuan feast awaiting us at the Ferryman. From 1279 there was a ferry across the river, when it was operated by John Cocas. Even as late as the 1950s it was a place for cars to ford the Thames. 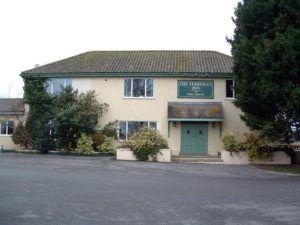 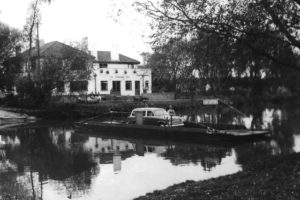 At the well-kept Northmoor Lock, we came across a single lamb who had somehow managed to stray from its mother and was venturing to make the treacherous journey to rejoin her. We were torn between going forward to open the gate, thereby risking the lamb panicking and falling in, and completely backing off, while waiting for him to make his own way back to mum .. also with the risk of a drowning. As it happened, the plucky little fellow managed to scramble around the gate on the water side of his own accord, without wetting a single follicle of his snowy white fleece! 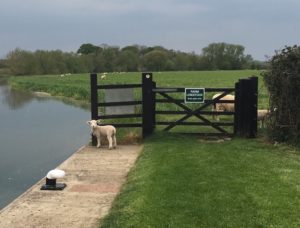 Our final destination was now in sight: The Rose Revived Pub at Newbridge.  As one fine writer about the Thames has written, ‘Newbridge takes its name from what Basil Fawlty would have called “the bleeding obvious”. It is the new bridge, so called because it is “new” compared to nearby Radcot Bridge, which was completed 25 years earlier.’ Both bridges were actually built in the 13th century! Newbridge was originally much larger, with 51 arches compared with its current dozen. It was the site of battle in the Civil War in 1644, when Roundheads fought Cavaliers without success, on the banks of the river. It’s said that Cromwell drank at The Rose Revived, one of two pubs on either side of the bridge. He took a wilting rose, placed it in a tankard of water and took great solace from the fact that the flower was standing upright within minutes, revived by its drink. After our experience at the dismal Ferryman, Anne and I were also well revived by dinner and a glass or two at the hospitable Rose Revived. 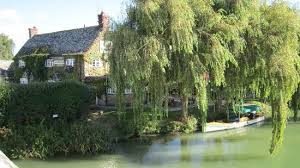 The Rose Revived at Newbridge

No dog of the day, but a very sweet lamb in its place. We thought long and hard of names we could have given it .. discovering that in fact there are few lambs in literature. Baa Baa, Mint Sauce, Lamb Chop, Larry and Mary’s Lamb were the only ones we could think of. Derek and Lenny from the Beano came up when I consulted Mr Google and of course there was Dolly. But we eventually settled upon Lambkin, as the prized lamb was such a sweetie. 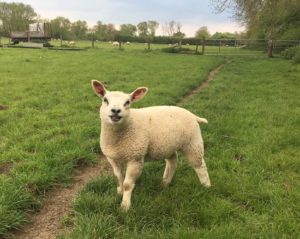