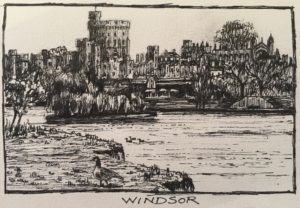 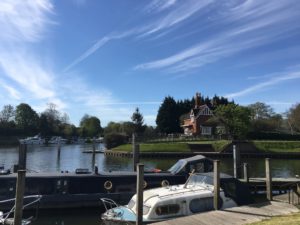 Starting the day at Shepperton Lock

The wet weather gear was once again able to stay tightly packed up at the bottom of the rucksack. The sky was deep blue and the clouds sparse as I set off from Old Shepperton. From dawn I’d had the windows open in my room which had been filled with the glorious sound of river birds and their splendid chorus of singing. A great start to the day.

At the lock I stopped for a chat with the lock keeper, one of 40 odd on the river. There was something timeless about his job description. 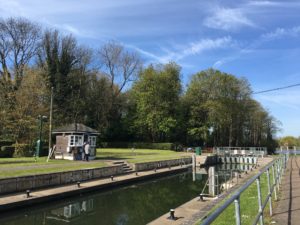 The Lockhouse at Shepperton

Today I was going to be walking on my own and while I missed the company of the gorgeous girls who had been at my side over the previous four days, it was an opportunity to be a little more contemplative. 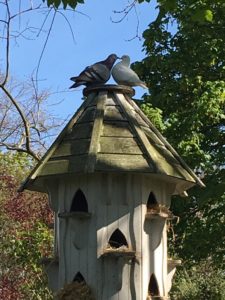 There were lots of lovely sights along the way which possibly I might have missed by being engrossed in the natter. Doves kissed, swans guarded eggs and cormorants took flight to the top of the highest trees .. 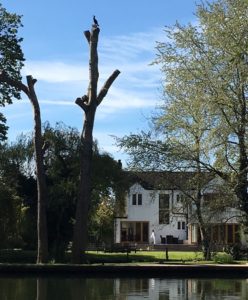 And then there was the unexpected sight of a polar bear .. 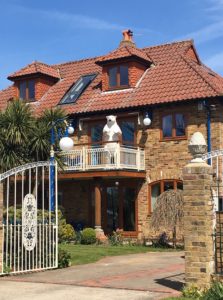 Bundaberg Bear on the wrong side of the Equator 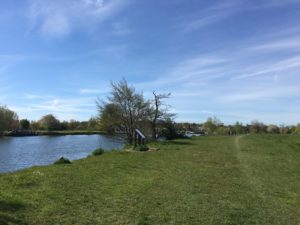 At Dumsey the path makes its way through one of the country’s very few ‘unimproved grazed grasslands’. It’s home to a mixture of rare wild flora and fauna. Naturally it gave the trail a very different feel from the house-lined banks I’d encountered so far. 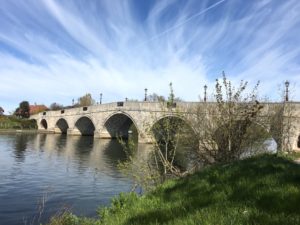 After crossing the bridge at Chertsey I came across a group of three ladies all studying their maps and glancing first up river then pointing down river. Looked like they were lost! Being women of course, they had no problem in asking me for directions (see Gus .. I’m not the only one!). ‘Which way is it to Windsor?’, they wanted to know. Turns out they had just been dropped at the river bank by a husband and had never played Pooh sticks to discover the flow of the water! I felt quietly smug being able to tell them with great confidence which way to set off .. but that of course, dear reader, is a very dangerous emotion for one with a traveling history like mine.

I turned into Laleham for coffee and came across a wee pack of dogs, dressed in various bizarre outfits outside a sweet cottage. 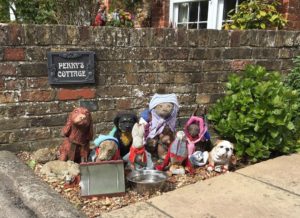 Hopefuls for Dog of the Day ..

This section of the trail is between motorways: the M3 and then after Staines, the M25 where some wisecrack had posted the bill below .. 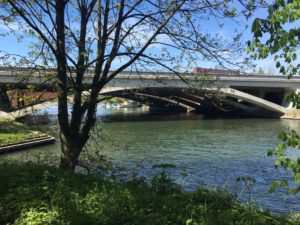 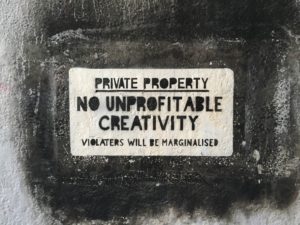 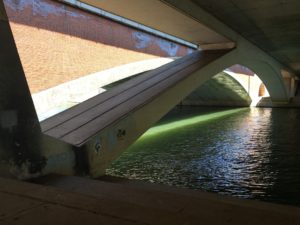 Under the nation’s biggest car park

And on to Runnymede. It was here that big bad King John is alleged to have signed the Magna Carta .. great charter for us non Latin speakers. Until 1215 the monarch was deemed to have divine rights over his underlings but once he’d autographed the piece of vellum at Runnymede, the Barons of the land could band together and over-rule him on certain issues. Massive simplification but you get the drift. 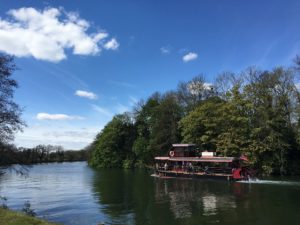 Last year a rather splendid statue of the Queen was erected to celebrate the 800th anniversary of the signing .. 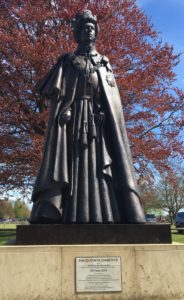 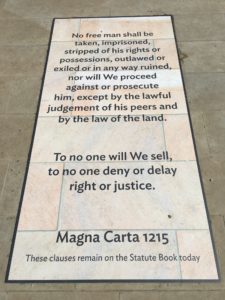 Missing my husband , I decided then to take a quick detour to the USA. Well, a tiny piece of land just across the A308, owned by America where there is a memorial to JFK. 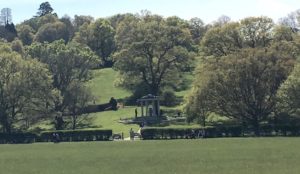 Memorial to the President

As you can see, the banks of the Thames in these parts is lush and green. A pure pleasure to walk. The path had become much more rural and was wonderfully peaceful. It was along this section that I witnessed an impressive exhibition of team-work in a marriage. A pair of swans were maintaining the nest where the pen was sitting on three eggs. She was feathering her nest with as many dry leaves as she could reach without leaving the nest and he was at the water’s edge pulling up reeds to make a pile of more robust material for the home. They worked together in perfect harmony. Utterly magical. 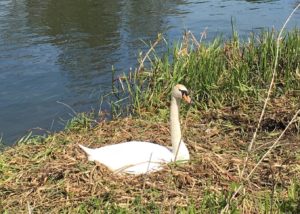 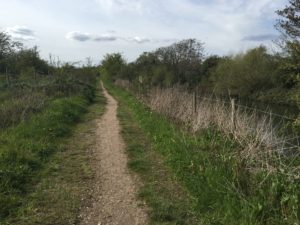 The trail showing its towpath routes at this stage

After crossing the Albert Bridge,  the route takes a sharp turn right across a field to affluent Datchet. Great big FO houses abound before you rejoin the river, with views across to Windsor Great Park. Strains of the bagpipes wafted across the water and appropriately enough, my phone rang at this stage and I was happy to be connected to Patrick. We chatted happily for some while, exchanging news, until I realized that my smugness of the morning was back to bite me. So distracted was I by our conversation that I’d taken a 180 degree turn at Victoria Bridge .. in the wrong direction. Agghhh! 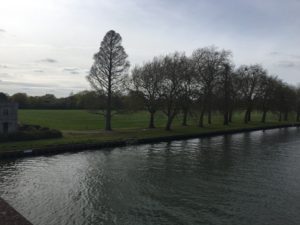 Looking across the river to Windsor Great Park

I did reach the hotel eventually and was treated to a fabulous view of the bridge just outside my room and then as the sun set, the rowing crews of Eton set off up river back to school. 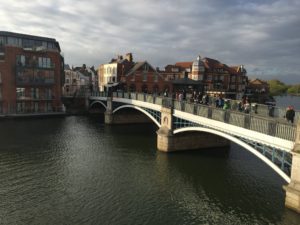 The bridge at Windsor 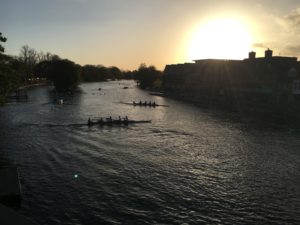 Once again there was competition for Dog of the Day .. 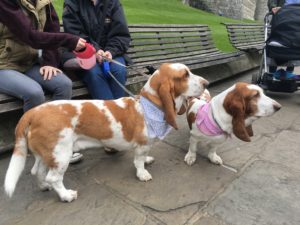 Pinky and Perkie. Good, but not good enough 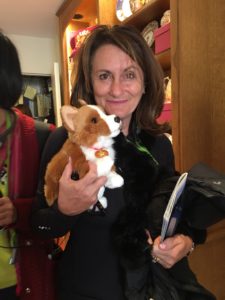 Dog of the day .. Camilla the Corgi. Had to be.