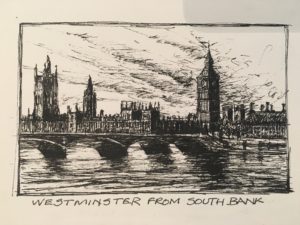 Once again, beautiful sunshine to start the day .. what is this about ‘grey old England’?! Any vestiges of a Cinnamon Cocktail hangover were soon dispelled with sights of Westminster looking superb in the spring light. Not to say that there wasn’t some wind around, as the bride and her stylist were finding, trying to keep the veil in toe.

Big Ben, or to give it its correct title, Elizabeth Tower, is probably the most iconic sight in Britain. How often do we see it used as the establishing shot of films set in London. It is soon due to be closed for renovation and London will be quiet, as it was during the Second World War. It will make for an eery London during those months. It is possible to climb the tower if you’re a resident of UK and have received permission from your local MP. There’s no lift and those escorted have to climb 334 limestone steps to the top. 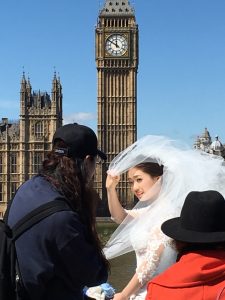 The walk then took me down to Vauxhall Bridge, via coffee on a beached boat. The bridge is functional enough, carrying the A202 across the Thames but if costs had not been a problem in 1963, a modern development of seven floors of shops, offices and hotels would have been built! 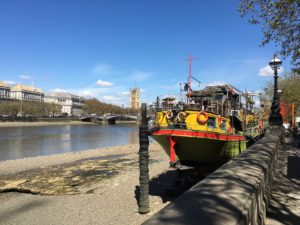 I crossed over to the north shore and as the miles got eaten up was stunned to see just how much development had taken place and was continuing to do so along the banks on the other side. London has utterly changed in the last ten years or so in this neck of the woods. According to The Economist, this is London’s biggest redevelopment since the Great Fire in 1666. At 195 hectares of redevelopment, spanning 1.5 miles of the riverbank, this is clearly Boris’ biggest project by far. To give you an idea of the scale, The World Trade Centre in New York is just 7 hectares. 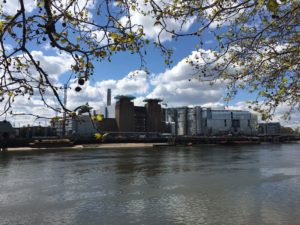 A fraction of the redevelopment happening on the river banks

The reasons for the development are several. There’s been a huge inflow of foreign money which has pushed up property prices. In fact London is now the second-most expensive city in the world. This has attracted such high profile organisations as the American Embassy, to move westwards. Sadly, it’s not difficult to see that many of the classy, glassy apartment buildings are not lived in but instead bought as investments. It’s been called London’s ‘Hong Kongification’. Changes in local government financing rules have also played their part in encouraging development. And thirdly proposals for an extension of the Northern Line have made the area hugely more attractive. No matter what your thoughts on the development, it’s pretty impressive.

And on to Chelsea Bridge, where my feet completely unbidden, turned right towards Sloane Square! I know, completely away from the river but the temptation was too great. I could almost hear Diana calling! Fabulous lunch at a sweet little Italian trat, where not a word of English was spoken, before heading back to the river. And who should be commemorated on the wall of one of the lovely Victorian houses but my old friend, Jerome. No sign of Montmorency though. 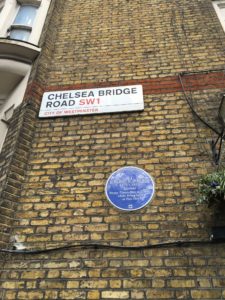 I paid homage to the Caspis and their lovely bridge (and big thanks as well for the wonderful Bollinger launch of my walk on Tuesday). Albert Bridge was once nicknamed ‘The Trembling Lady’ because of its tendency to vibrate when large numbers of people walked across it. And at either end there remain warnings to troops to break step whilst crossing! It was once a toll bridge and the tollbooths can still be seen at either end. 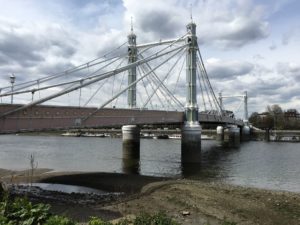 There are a fair number of wharves along the banks and at one stage I came across an abandoned boat and the  tribute to its erstwhile owner .. 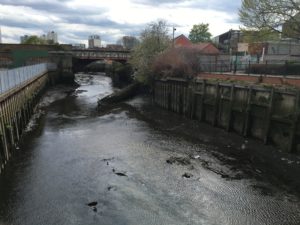 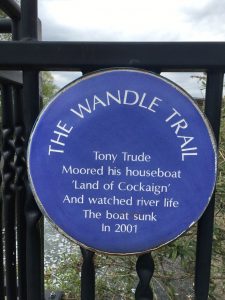 .. and the epitaph to the owner

The south side of the river around Battersea, had many beautiful and intriguing sculptures along the way. Battersea Park has some very famous ones, including those by Moore, Epstein, Gill, Rodin, Matisse and Hepworth. The history of interest and investment in this medium started in 1948 with an Open Air Exhibition, which attracted 170,000 visitors. There are many contemporary pieces too and I make a mental note to return and enjoy them again in the future. 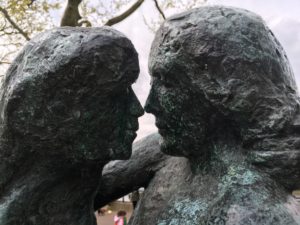 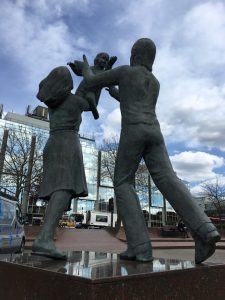 ‘In Town’ by John Ravera 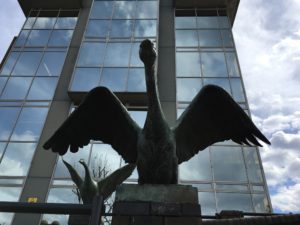 While I waited for Jin to join me for the last leg of the day’s walk I ducked into a massage parlour on Putney High Street, for both of my own legs to be massaged. Heaven! Sadly I couldn’t get the masseur to accompany me the rest of the way to the Source, dispensing daily treatments along the way.

Putney Bridge has medieval parish churches at each end, which makes it unique among the London bridges. It has its notoriety too, however .. in 1953 the British serial killer and necrophiliac John Christie was arrested on the bridge. But of course, it is as the location for the start of the Oxbridge Boat Race that Putney Bridge is most famous.

Beyond Putney the trail takes on a whole different feel. Suddenly we’re all leafy and rural  with wood pigeons cooing in place of seagulls screeching. I feel I have left behind the city Thames and exchanged it for a little more peace. 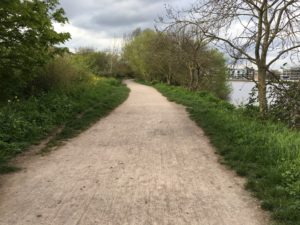 It was here that we came across this gorgeous boy .. 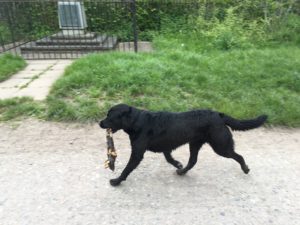 Jack, a contender for the Rover ‘log-carrying’ award

and these gorgeous boys .. 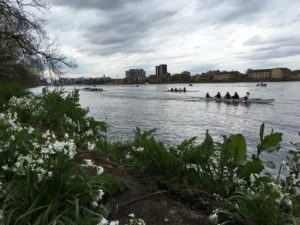 And before we knew it we had arrived at my favourite London bridge .. 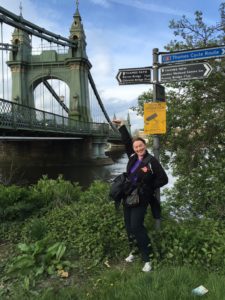 Jin in front of Hammersmith Bridge

The iconic Hammersmith Bridge was the second to be built in this location. William Tierney Clark was the designer of the former structure in 1824, which was the first suspension bridge over the Thames. It was once a toll bridge, like so many I was to see on my journey. The increased weight from more traffic however, made Clark’s bridge unstable and it was replaced in 1887 by the sage green and gold one we can see today.

Hammersmith Bridge has quite a history of bravery and cowardice. There is a plaque on the handrail which bears testament to the brave South African, Lieutenant Charles Campbell Wood, who in 1919, dived from the bridge to save a drowning woman. She survived but sadly tetanus killed him, as a consequence of his injuries. And then in 1939 Maurice Childs, a hairdresser from Chiswick, was walking home in the wee hours, when he noticed a smoking suitcase lying on the bridge. Quick-wittedly, he chucked the case into the river and averted a major IRA bomb attack from destroying the bridge. He was awarded the MBE for his bravery. The IRA had a second attempt at blowing up the bridge in 2000, which closed the bridge for two years.

Jin and I turn inland and walk along Castelnau to join Liz, Freddie and the pups for supper. It has been a really interesting day, with so much to see and admire.

And dog of the day? Cleopatra was a spaniel I spotted being carried from her outing with dog-walker, Bruce back to her smart riverside apartment! 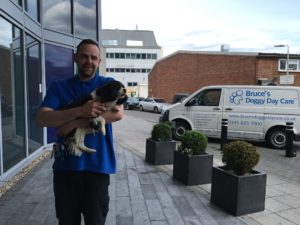