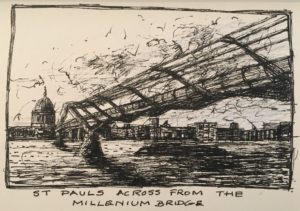 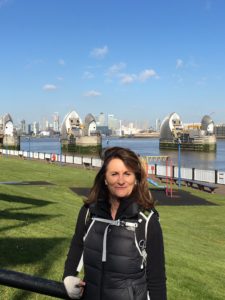 Glorious sunshine at the Thames Barrier, at the start of the Trek

Remember that tingly, excited feeling you used to get as a kid, the night before going away for your annual holiday .. well, that was just how I felt on Tuesday before setting off on the Thames Trail .. or the Great Trek, as some of my dear Zimbabwean friends would have it. After all the prep, it was wonderful to know that the day had eventually arrived. And what a day! Glorious sunshine and not a cloud in the sky. Far more promising than the snow I had left behind in Cirencester.

To kick off .. a few snappy facts:

. 184 miles ahead of me   . 14 days of walking   . That’s 7 marathons back to back!  . 14 gorgeous friends joining me along the way   . And just a 5.2kg backpack for the entire trip .. yes, please be impressed. Phil our lovely Cirencester taxi driver certainly was, considering the humongous amounts of luggage I usually have!

And so at the crack of 9.30 (not at daybreak as Brydon and Coogan would have suggested), my lovely friend Liz and I set off past the other-worldly Thames Barrier.

Since opening in 1982 the Barrier has prevented the flooding of 125 square kms of London, from tidal surges and storms brought in by the North Sea. It has been closed a total of 176 times .. 87 times to prevent flooding and 85 times to stop a combined tidal and fluvial flooding. Fluvial? Not a word I’d come across before. Apparently, it’s a definition used in connection with river flooding .. so, when the Thames is flooding further upstream, the Barrier will be closed at high tide, to prevent the sea coming in and simultaneously allowing the water from higher up in the river to fill the gap created by the closure. Fascinating.

The river at this stage is wide and tidal, with sandy grey beaches. There’s a distinctly industrial feel to the walk, with little of the grandeur we know to be ahead. But there are fantastic statues and sculptures to distract .. 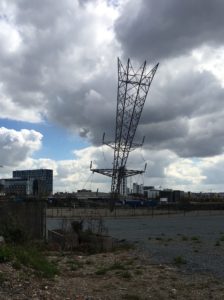 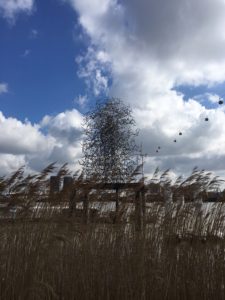 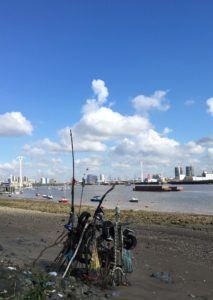 Flotsam .. or is it jetsam sculpture on the beach

Before long we came to North Greenwich Pier where we grabbed the tiny shuttle boat (a little worryingly called Predator), to hop across to the north bank, to Trinity Buoy Quay so that we could visit London’s only lighthouse. Not nearly as inviting as the real Lights’ house in Barnes, it was still worth the visit to hear the Long Play music recording, which started on the eve of 2000 and will continue uninterrupted, without repeating until 3000. Pretty awesome! Also worthy of a mention was the delicious coffee at Fat Boy’s Diner and the intriguing container homes, next to London’s School of drawing. I SO want to go there! 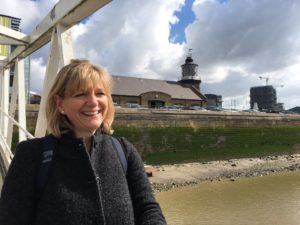 Liz and her second Light House 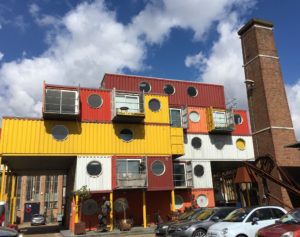 Next to the lighthouse there is a wee little hut, which replicates what Michael Faraday’s working place would have looked like in the early 19th century. Even though it is barely large enough to swing a cat, it is a gem of a discovery, with snippets of information waiting to be found behind cupboard doors and in drawers. Faraday was best known for his 1831 discovery of electromagnetic induction .. yes, I knew that and can pronounce it without hesitation! But he also did a whole pile of research into lighthouses, hence the location of the hut. The type of chimney that he invented, prevented the black soot from the combustion of the lamp from settling on the glass and dimming the light. It was widely used in lighthouses and was the only invention that he actually patented. 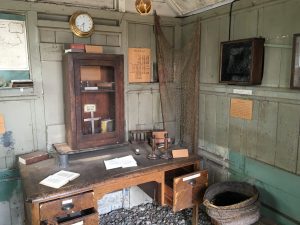 Before we could get on with our Trek we still wanted to cross the river by cable car .. I didn’t even know London had one. Great way to get to the Emirates O2 Arena. 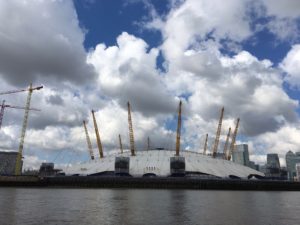 And then it was enough of crossing the Thames for the time-being .. we did tunnel and bridge later in the day .. and on with the walk. Past Greenwich and its grand Naval College; views of the Isles of Dogs; inspecting pigs (but sadly no piglets) at the City Farm .. to meet up with Jin for a late lunch, who was joining us straight after arriving from the States on the red-eye. What a woman!

UNESCO has a very high opinion of  the Old Royal Naval College. It referred to it as ‘the finest and most dramatically sited architectural and landscape ensemble in the British Isles’ and crowned it a World Heritage site. Originally it was a hospital for seamen and then in the second half of the 19th century became the Royal Naval College for Officer training until 1998. Sir Christopher Wren was the architect and Inigo Jones designed the Queen’s House in the middle. At one time on the site however, there stood the Palace of Placentia .. or Greenwich Palace as it became known.

For Nelson fans (and who amongst us isn’t one!), there is a wealth of memorabilia about the man inside the college, including a replica of the statue standing in Trafalgar Square. The rooms are fabulously decorated and have been used as the sets for many diverse films .. The King’s Speech, Pirates of the Caribbean, Pulman’s Northern Lights, Lara Croft: Tomb Raider, The Dark Knight Rises and Les Mis, to name but a few. 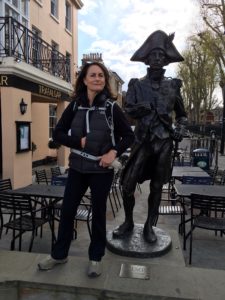 Standing in for Jin with the statue of Nelson

Turning the page in the book of maps for the first time, we moved on to Rotherhithe, Bermondsey, Southwark and then were rewarded with the awesome sight of Tower Bridge .. the first bridge on the river (when you walk backwards upstream). 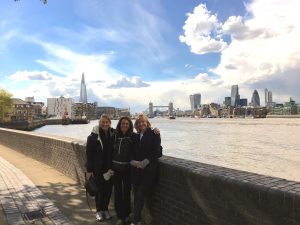 With Jin and Liz and The Shard and Tower Bridge 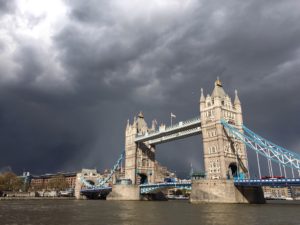 Tower Bridge was designed by Sir Horace Jones at the end of the nineteenth century. It’s hugely iconic but apparently Londoners were not that keen on the design when it first went up. Today 40,000 people cross it a day and although I’ve never seen it happening, the bascules are raised in the region of 1000 times a year, to allow ships through. 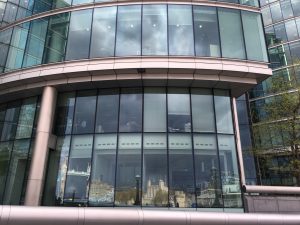 The Thames Path has become very, very busy with pedestrians .. a mixture of tourists and workers finishing up their day with a quiet bevy at the plentiful Thames side drinking holes. It is quite different from our quiet morning.

London then seems to concertina into a fabulous show of wonderfully familiar landmarks .. The Tower, HMS Belfast and the Golden Hinde, Southwark Cathedral, the disappointingly no longer wobbly Millenium Bridge, the Globe, the Tate Modern, St Paul’s .. and before we know it we have crossed the river and are sitting having Doc Fletcher strength drinks outside Somerset House, in the evening sun.

What a way to start the Trek! Spritzers with two great friends. And to cap it off we then had the unexpected and fabulous company of Mr Light for dinner and more cocktails. 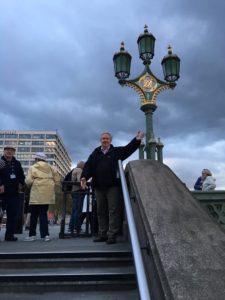 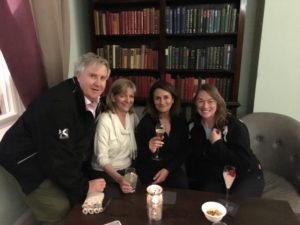 Cocktails in our walking finery and not a Coca Cola logo in sight!

Before saying goodnight, I need to add in my two regular features .. my drawing of the day (at the top of the page) and my vote for the best dog of the day, seen on the walk. Madam was a chocolate lab, a failed guide dog, who now loves racing up and down Thames beaches, retrieving tennis balls. Liz and I saw her in amongst the newly discovered remains of a Tudor wharf. 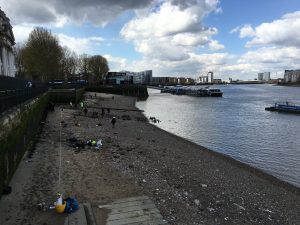 You can just see Madam among the archaeologists