Reflections on my Thames Trail Walk 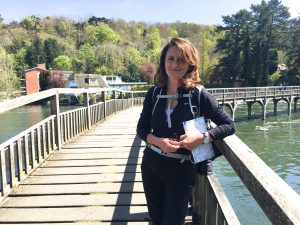 The day before I set off on the Thames Trail, I wondered if it had been such a smart decision to walk it backwards. After all, I hadn’t come across a single other person who had walked upstream from the Barrier to the Source. By the end of the walk I still hadn’t met anyone who’d tackled it from  east to west, although I’d crossed paths with several going in the opposite direction. Actually, it didn’t take me long to realise my decision suited me well .. I loved the sense of the river becoming more rural, of leaving first the city and then towns and eventually even villages behind. As the path changed from tarmac to gravel to grass and became narrower, it also became quieter and more tranquil. The sound of Heathrow’s flight path was exchanged for that of songbirds. Each day felt simpler than the previous and there was a true sense of increasing peace, both in the countryside and in my head.

Since I’ve been back I’ve come across other bloggers who have said much the same. The Walking Gardener who has done many, many trails around the UK has this to say:

‘I find these long (mostly) solo walks terrifically therapeutic. My brain is swept clear of the usual, everyday banalities and the importance of just getting to the day’s goal is paramount (that and hopefully a pub for lunch). I am far more aware of my body; noting and analysing every new ache or pain as a possible impediment to completing my walk. And without a companion (and so not engrossed in conversation or matching pace) I stop and look about me far more.’

I couldn’t agree more. One of the comments made by a follower of his blog reads: ‘I’ve never been a huge walker, but one day, very low and depressed I set out to walk. I walked and walked and walked. I didn’t know or care where I went, I walked in the dark in the mud and eventually I realised I had to go home. The rest is a long and humbling story. But out of the dark came some light. Walking, just putting one foot in front of the other is a therapy above all others.’

It’s not too surprising to find that walking is a tool that Mindfulness Meditation uses to calm and bring the mind into focus. It’s not the shopping down the High Street, racing for a bus type of walking but the walking where you are dwelling neither on the future nor the past. You gradually start absorbing the sensations of the here and now. It is hugely powerful and is an aid to contentedness, which wonderfully also happens to cost a brass razoo.

I had intended to listen to a huge number of podcasts, which I’d organised in advance. As you know, I’m a big fan of Radio 4 and thought I would catch up on endless episodes of Desert Island Disks and keep up to date with The Archers etc etc. But I didn’t listen to a single episode. Nor did I spend hours thinking about a tricky painting that needed resolving nor thinking how I would vote in the upcoming Brexit referendum .. it really was enough to listen to the birdsong and absorb everything that was going on around me. By the end of the journey I felt soothed as well as surprisingly energised.

I completed half the Trail walking by myself but I was fortunate to have the company of good friends for the remainder of the time. These days were very different from my solo days and just as uplifting. Walking is a wonderful vehicle for conversation .. for tackling the trivial to the deep and meaningful. Having a full day to talk with a single companion is so much more relaxing than having the limited time of a lunch date and it also invites an intimacy that is just not possible when there are more than two gathered together. It felt like a huge treat to have a whole day of a friend’s time and I am so grateful to you all for organising to come along.

There was of course one exception to these days, when we had an entire party walking the Trail, from Clifton Hampden to Oxford. There were many stops on this day for refreshments and much hilarity, culminating in a fabulous dinner on the Cherwell. I absolutely loved having so many old, old friends with me on the journey, especially my man who flew across the pond just to be with me for the day.  My heart-felt thanks also go to the wonderful friends too who took me in at the end of a day’s walking and showed me such generous hospitality. It was so kind of you all and I loved the opportunity to catch up and set off the next day feeling well-fed, well-watered and blissfully clean!

Walking for a charity?

Several people asked me whether I was doing the Trail as a sponsored event. Indeed, it was something I considered myself when I first had the idea for the walk. In the end I decided to simply do the walk for my own enjoyment and the joys that companionship bring. It’s not that I’m against sponsorship and we have often participated or backed others when they’ve been climbing mountains or running marathons. It was just that I felt uncomfortable asking friends and family to contribute to my chosen charity yet again .. better for me to make a separate contribution myself, if and when I reached the Source.

Would I do anything differently?

I probably should have practised writing up a blog on my iPad more before I left. I definitely should have read more about the English Civil War history before I began the walking .. it would have increased my appreciation of all those bridges where battles took place. And of course I’d know the two pubs to avoid if I ever walked the Thames going forwards. But apart from that .. no, I wouldn’t have changed a thing. I loved having minimal luggage and carrying it all myself. I loved the balance  of solo and companion days. And I loved everywhere I stayed.

I have been totally bitten by the long distance walk bug. Since I’ve been back, my reading has consisted of nothing other than walkers’ blogs! It’s addictive. I have a list as long as your arm of trails to tackle. Starting with The Cotswold Way, hopefully some time soon. Care to join me?!