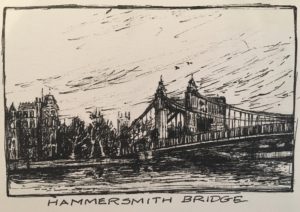 After a delightful evening at London’s best Light house .. despite the equine disturbances in the night .. I stepped out into yet another day of sunshine. The first little stretch from Hammersmith to Barnes Railway Bridge was with Freddie, Liz and their three miniature daschunds. 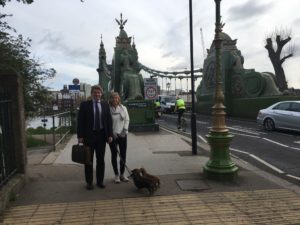 Escorting Freddie to work with the Light pups

We took the north bank for this part as it took us past some of the prettiest pubs. On summer evenings and during the Oxbridge boat race they would be overflowing with punters. 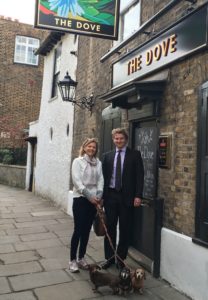 The Dove boasts the shortest bar in the country .. but don’t worry, there’s another one besides! The path took us past a whole host of blue plaques, amongst them William Morris’s House. The Pre-Raphs clearly liked this part of the world as later I came across Arthur Hughs’ place too. 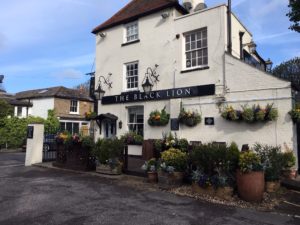 The All Blacks’ pub

Another pub that caught my eye was The Black Lion, which temporarily changed its name to The All Black Lion, when the Kiwis won the RWC last year!

After saying goodbye to Freddie at Fullers, Liz and I continued on to Barnes, sweet little trotting feet at our side. Once there, it was time to do a Liz Exchange, as I said a fond farewell to Liz Light and met Liz Heis off the train, for the rest of the day’s walk. 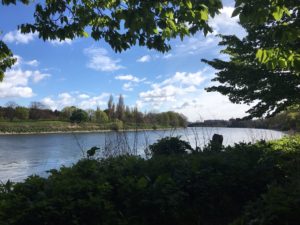 Despite being pretty chilly, the day was bright and the Thames was looking beautiful. We passed gorgeous house after gorgeous house .. It would have been easy to do a 25 Beautiful Homes, right there and then. 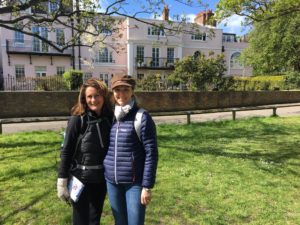 Pretty pastel houses along the banks

Realising that we had time to spare and that I had never visited Kew Gardens, we decided to take a detour and were rewarded with beautiful sights and smells of bluebells, late tulips and a whole host of others. 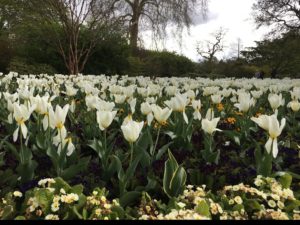 Last few days of the tulips at Kew Gardens 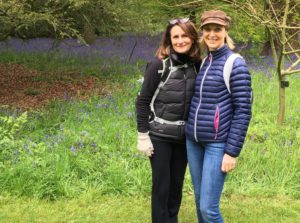 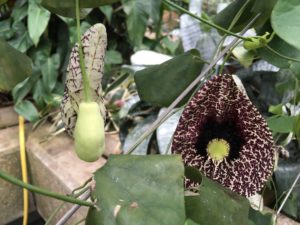 Liz bravely accompanied me up a glass lift to the Tree Line Walk .. not quite clinging to the rails but clearly not in her element! As we walked among the spring budded trees however, the heavens opened and we were treated to a flash shower of sleet .. all over and done in the blink of an eye. 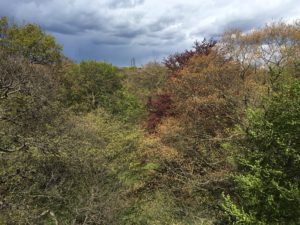 View from the treetop walk at Kew

The skies continued to look threatening so we decided to take cover in a hostelry on Kew Green, very pretty with its fun fair and wisteria clad houses. 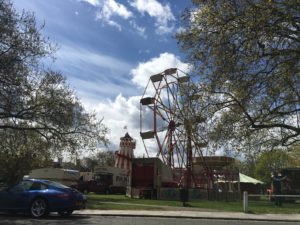 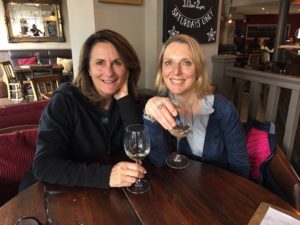 Oh alright then .. but just a small one at lunchtime!

And then back to the river, after all this was what we were supposed to be doing! 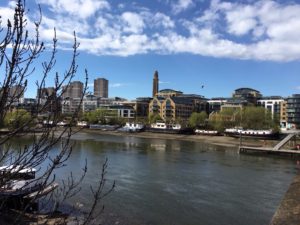 The river is dotted with islands and houseboats at this stage and we considered how well we would do with minimal plumbing and hot water .. not so well was our conclusion. We preferred the look of Syon House, although that was probably a little austere and way too close to a somewhat strange garden centre. 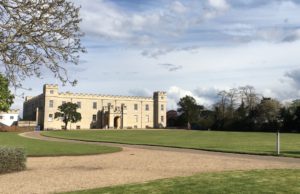 The path takes a route inland around now and I was very happy to have Liz with me, to negotiate the lack of signs and signs that had been mischievously turned around the wrong way. 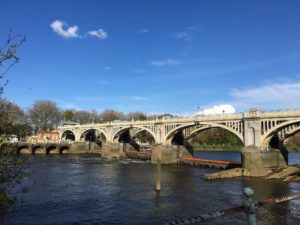 As we drew close to Richmond there was distinctly holiday feeling as pubs overflowed with people ahead of the bank holiday. Liz had the inspired idea of getting tickets for a performance of ‘Clybourne Park’, a satirical comedy showing at Richmond Theatre. Feeling proud of our sponteneity, we walked into Richmond for the show. To cap the day we came across an early season cricket match on Richmond Green .. looking beautiful as it was bathed in golden light. Happy spectators watched from the aptly named Cricketers’ Arms! 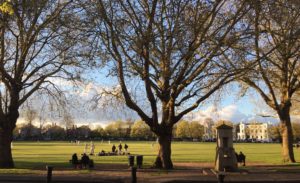 Evening cricket on the Green at Richmond 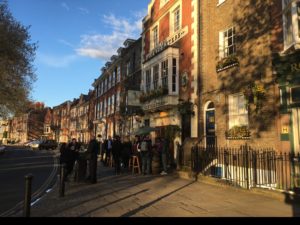 The Cricketers arms on the Green at Richmond

The play was outstanding and made a fitting end to a really fabulous day. 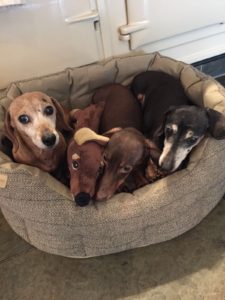 Darling’s dogS of the day