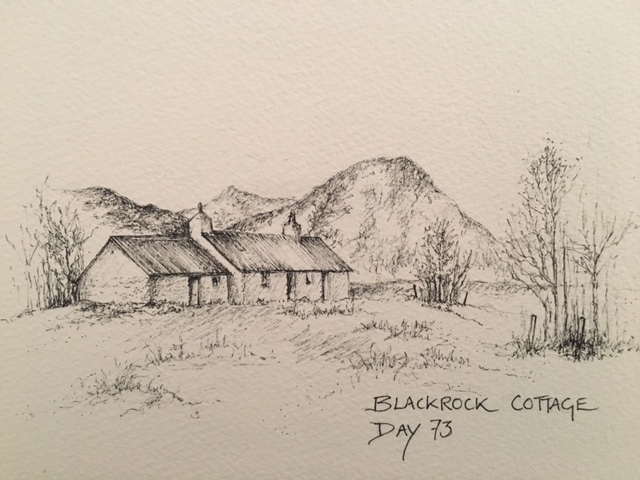 We had to retrace our steps from Crianlarich through the forest to rejoin the West Highland Way. The top of Ben More was obscured by cloud and remained like that for as long as we could see it during the day. It was a cool day which made for very comfortable walking. 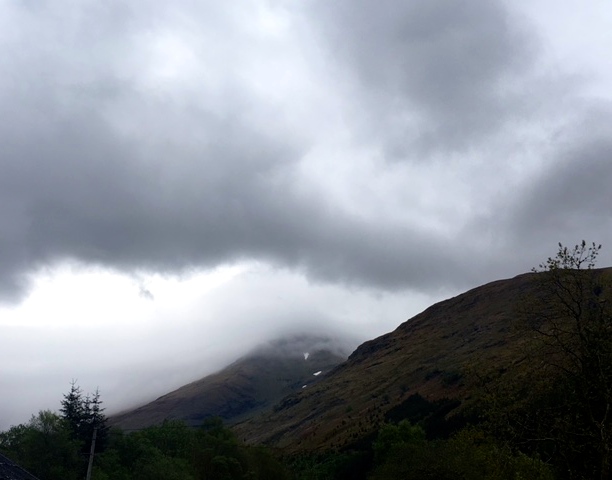 The pine forests we drifted through were magical, reminiscent of all the fairy tales we’d read as children .. Hansel and Gretel, Little Red Riding Hood, the Narnia books, Harry Potter and even Enid Blyton’s ‘The Enchanted Wood’, the first in ‘The Faraway Tree’ series. The carpet of pine needles made our footsteps quiet and cushioned. We passed a couple of wild campers silently sharing breakfast in the sunshine outside their tents. 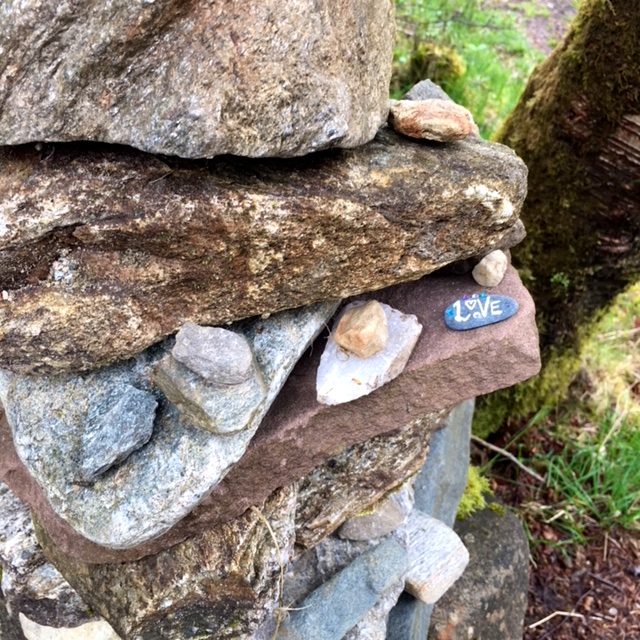 Little love message among the stones 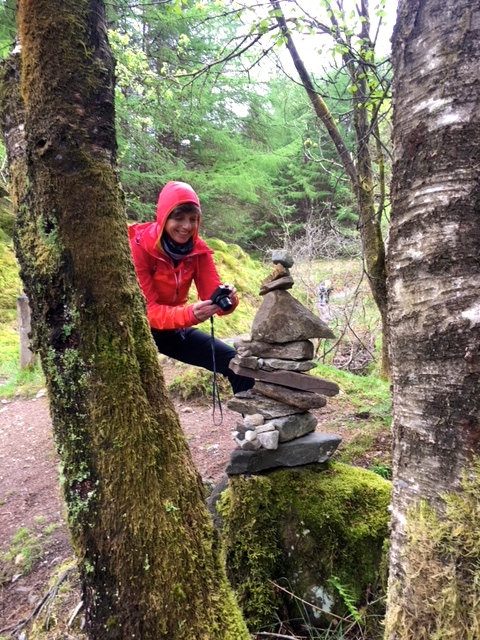 While my sister and I were super keen to spot wildlife on our walk, there was one species we’d run a million miles to avoid. The Highland Midge. Towards the end of May these pesky tiny flying insects, with a wingspan of just 2-3mm, suddenly appear on the scene .. making the lives of many hikers a misery. It’s only the females that bite. They emerge with sufficient fat reserves to mature their first batch of eggs but then need a blood meal to give further batches enough nutrients to grow. The males of the species are complete honeys in contrast, living peacefully and sweetly off nectar.

There are a few ways to avoid midges. Stay inside. Retire to the bar at dusk. Take to the hills where there might just be a breeze, which midges struggle to fly in. Or leave the Highlands altogether, as they have just the sort of moss and tall bracken that midges thrive upon. Both my sister and I have vivid memories of a childhood holiday in Gairloch, when we spent an entire fortnight wearing chiffon scarves over our heads to thwart the wee beasties. I wish I had a photo to show you of our trend-setting. Emerging from the forest we came to the remains of a 13th century priory, set among trees dotted with birdboxes. It was a very peaceful place. Apparently the priory was built as a dedication to Saint Fillan the Missionary who had come across from Ireland to convert the Scots and Picts. Across the path from the priory ruins was a cemetery, dating back to the 8th century. Several unique gravestones lay on the ground in the enclosure .. but as all were turfed over, there was no way of finding which they were. They’d been covered to protect them it seemed.

After our Cullen Skink lunch at The Green Wellie in Tyndrum we had a walk which ran parallel with the train line and the road. After the high volume of traffic on the West HIghland Way at the beginning of our walk, this afternoon we had the trail to ourselves. Difficult to fathom, really. And the ever so curious little black lamb

The village Bridge of Orchy, sounds like a location out of ‘Lord of the Rings’ and while the military road running through it was not built to keep out Orks, it was intended to provide a way of moving troops quickly around the interior in the 1700s. Before this, there were simply drovers trails. The 1200 miles of roads completely transformed the Highlands, making the whole interior accessible and Jacobite rebellions far more easily suppressed.

I stopped for a top latte at the Bridge of Orchy hotel. The very pleasant place was packed to the gunnels with walkers who had finished for the day, all having their first pint. It made me smile to think of my own son and his mate, Marcus who had arrived famished at the hotel during their gap year, as they too were walking The West Highland Way. They each had a three course meal. And then straight afterwards they each had another three course meal! So at least they weren’t hungry when they discovered that they didn’t have a room for the night .. which meant they were forced to sleep in a rude bothy with only three sides in the pouring rain a couple of kilometres further on. Poor wee boys. Hotel at Bridge of Orchy

Inveroran, our destination for the day, has a huge draw for adrenalin seekers. After they’ve bagged the couple of Munros close by, the big activity will be the white water rafting in the River Orchy. For those wanting a more meditative way to pass time in these parts, the salmon fishing is supposed to be awesome. In fact, look on any website and you’ll be told the Orchy is the most picturesque salmon fishing river in Scotland. Looking across the fresh white, rushing water, you’d be hard pushed to disagree. The River Orchy .. in between the rapids

The injection of caffeine really helped to gird the loins and I set off with a positive spring in my step. As the golden eagle flies, Inveroran Hotel isn’t far from Bridge of Orchy. However, the contours are close together and the last few miles were reasonably arduous. But climbs seldom go unrewarded and from Mam Carraigh there was a wonderful view across Loch Tulla, which the River Orchy flows into. In every direction the views were sensational and Helks and I had them totally to ourselves. Added to which we had completely left behind the faint background noise of the traffic from the A road. It really did make my soul soar. The moorland path downhill led to our hotel, serenely located at the head of the loch. We could see it from the tops, nestling comfortably beneath snow-capped mountains. Late afternoon, watching the freight train passing through the valley The head of Loch Tulla Looking down at the Inveroran Hotel

William and Dorothy Wordsworth were guests at Inverorarn Hotel on their first tour of the Highlands in 1803. More recently the photographer Fortunato Gatto has stayed and taken many beautiful shots of the surrounding countryside. They were all around the walls of the lovely hotel where we had one of the best and freshest meals of the journey. Perfect end to a perfect day.