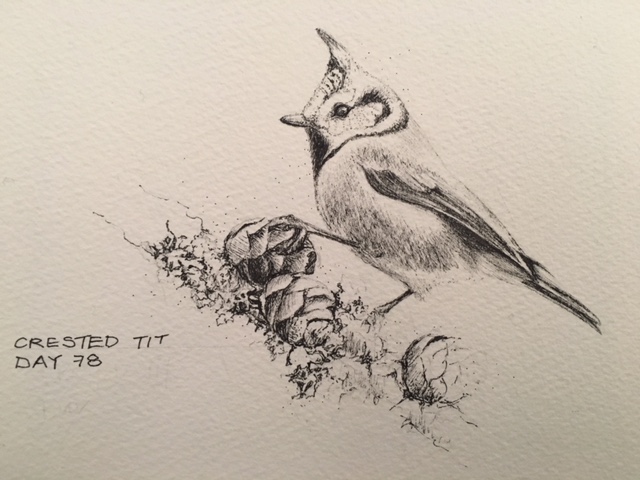 The sun was already high in the sky by the time Robert dropped us back at Gairlochy swing bridge at 9am. The food and hospitality had been terrific at Smiddy Hotel .. advertised as a ‘restaurant with rooms’, as the food was so special. 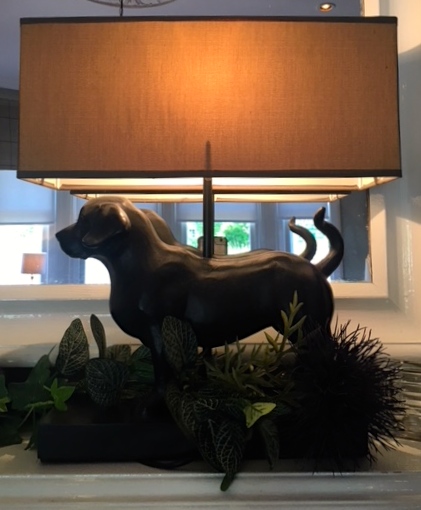 The first lake we came to was the sweetly named Loch Lochy, reminding me of the poll which reached out to Jo Public in 2016, to name a new British government research vessel.  The name that was overwhelmingly voted for was Boaty McBoatyface! Unsurprisingly and very disappointingly it wasn’t allowed in the end and once the powers that be had recovered from the shock, it was officially christened the Sir David Attenborough. 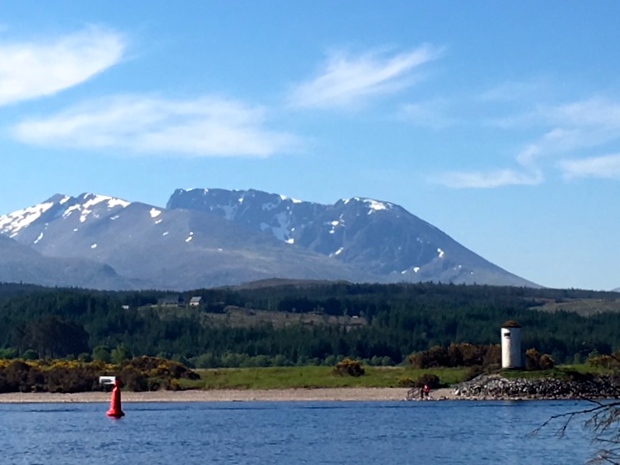 The Ben from Loch Lochy 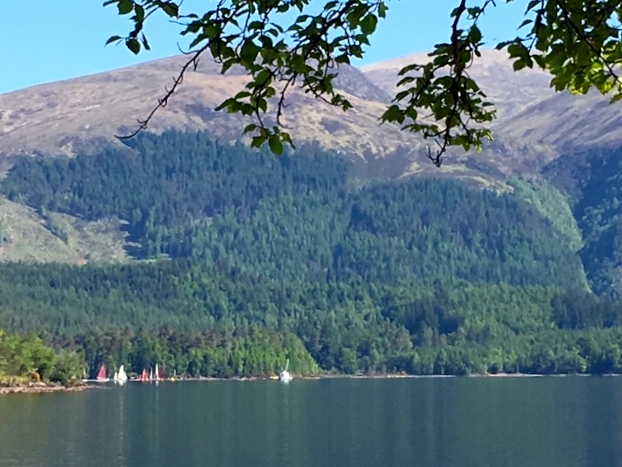 Forests coming down to the water

The whole day’s walk ran along the northern shore of three lochs: Lochy, Ceann and Oich. We walked in and out of birch, beech, oak and alder forests, coming close to the water and then retreating, over and over again. It was very calming, with the water as motionless as a millpond and far fewer people out boating than yesterday. The views were breath-taking, looking back towards the snow-capped Ben Nevis. At times we felt we’d been transported to Norway and the fjords. 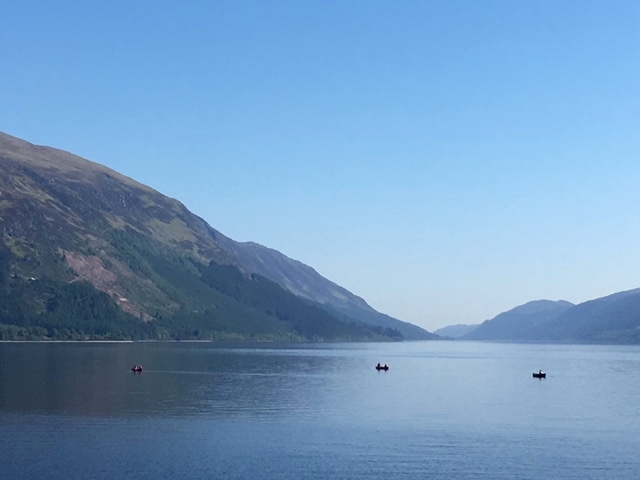 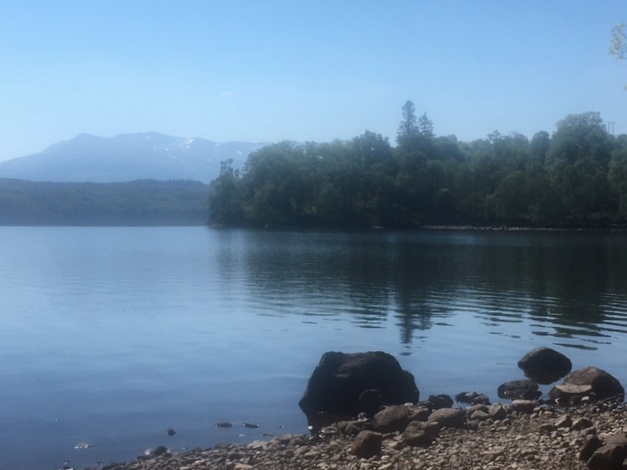 Thick forest grew down to kiss the water’s edge on both sides of Loch Lochy. Yet again we had to restrain ourselves with the number of times we stopped to take photographs .. at every bend there was a fresh masterpiece. We paused a couple of times to take a look at abandoned boats and to take foot dips. The water was arctic but hugely refreshing. 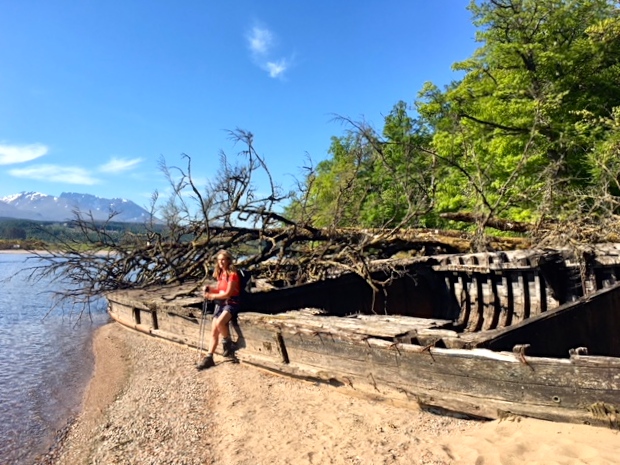 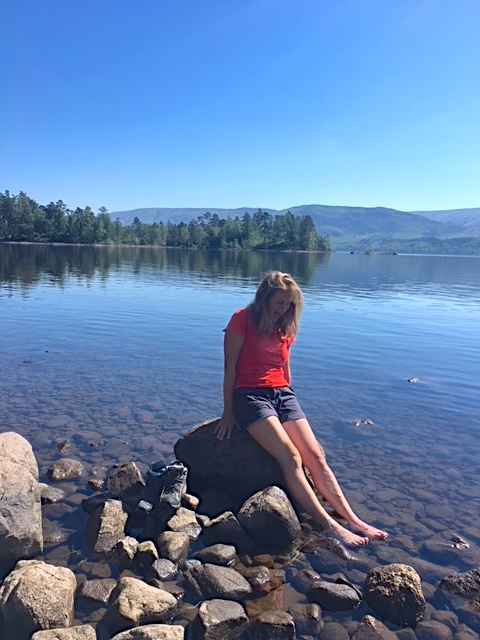 The whole area must have felt very different during the Second World War when Achnacarry was used as the Commando basic training centre. It had the reputation of having one of the most gruelling military training regimes in the world. We passed by an innocuous looking rectangle of concrete which, upon closer inspection, revealed that it had been used as an original practice landing craft. Attacking from the sea during the Second World War was a key tactic and it was here that the Commandos were put through their paces, getting as close as possible to the live situation as they could. The troops practiced under live fire. No blanks were used. The soldiers who were trained here played a key role in the Normandy Landings during Operation Neptune. We found it next to impossible to conjure up images of the training, as we stood in the dappled sunshine. 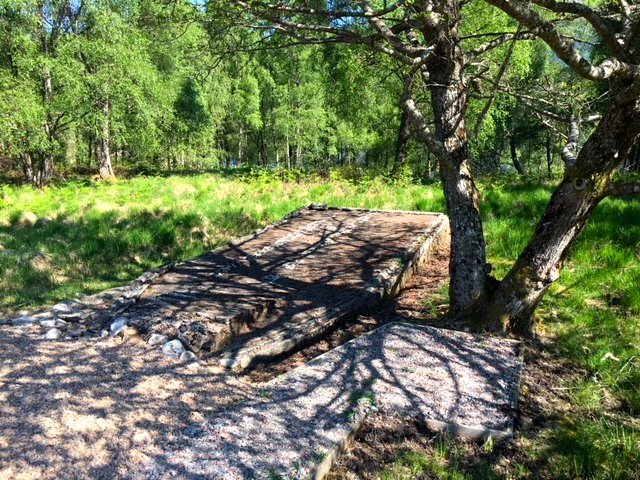 At the end of Loch Lochy we switched to follow the shores of Ceann Loch. Once again the peace of the day was thrown into stark contrast with its history. Nearby on a sweltering day in 1544, the Battle of the Shirts took place. Three hundred Frasers took up arms against 600 MacDonalds and Camerons to settle the score after a perceived insult. I should love to know just exactly what the insult was. It must have been legions worse than anything I could even begin to imagine as the carnage was colossal .. only 12 men remained alive at the end of the day. It was just about impossible to conceive of ,when we looked out across the serenity of the loch, that anyone’s shirt could be in that poor taste to launch a scrap on such dimensions. 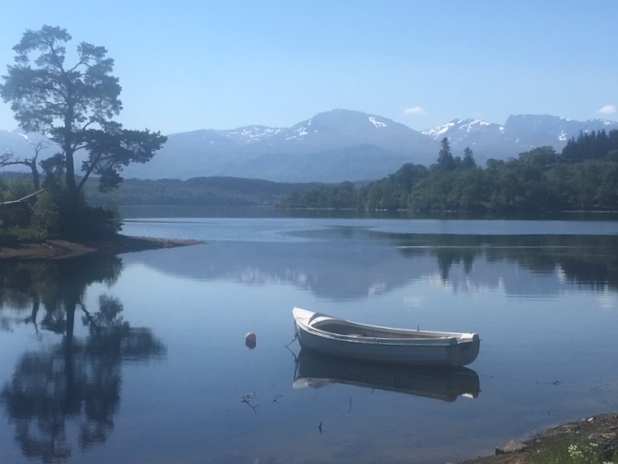 Not a shirt in sight

Shirt envy of yesteryear was fabulously superseded today by the strains of the saxophone being played on a party boat. The laid-back music stayed with us for half an hour, lifting the spirits and rather making us wish that we too were on the boat that didn’t rock today. 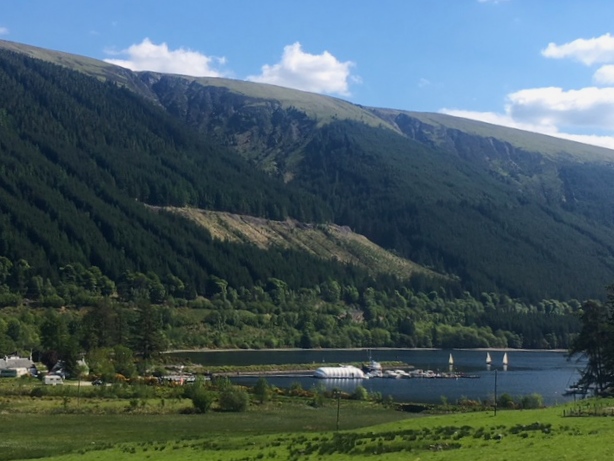 Strains of the saxophone resonating throughout the valley

Bluebells were out in force again today, with their heady fragrance folding into that of the honeyed gorse. Sophie was raised in the French countryside and recalled the dishes her mother used to make using dandelion leaves, much like the ones on the edge of our path today. She recalled how the young leaves of the pissenlit, before the flowers bloomed, would be cut and wilted in a pan with butter and lardons for a light lunch dish. Delicious if a little diuretic. 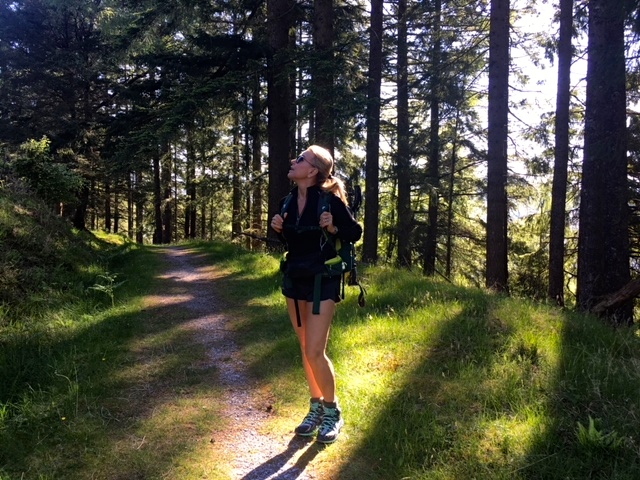 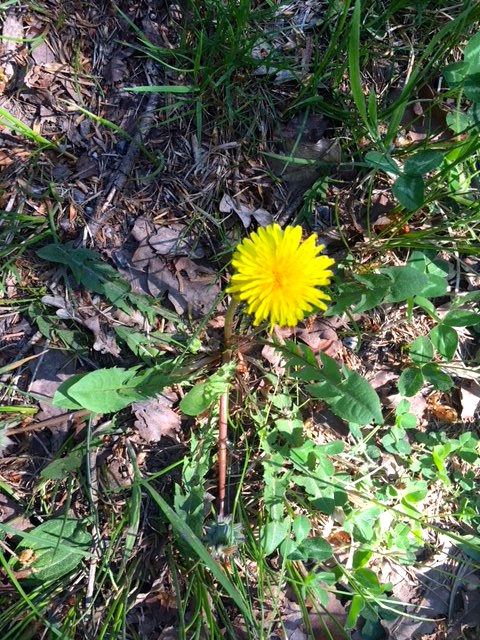 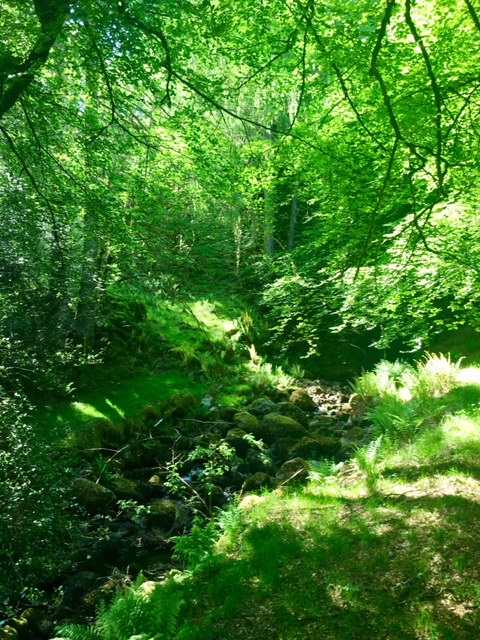 Unbelievable greens in the forest .. 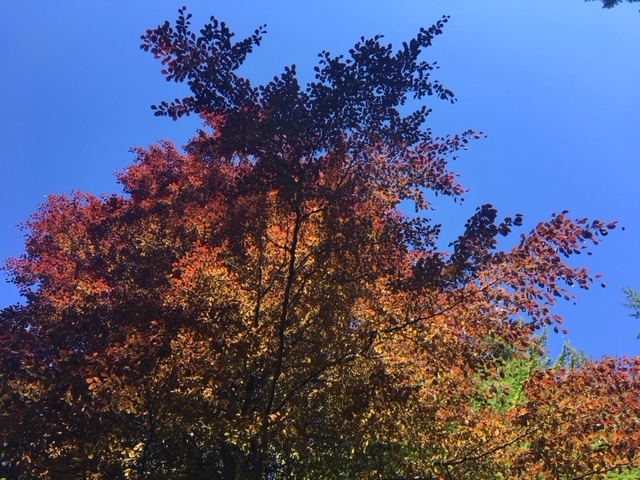 .. punctuated by the ambers of the copper beech

There was a curious monument a short distance from Invergarry called the Well of the Seven Heads. It commemorates gruesome events that took place in the 1660s. The seven heads were those of the murderers of two Keppoch family members, a proud section of the MacDonald Clan. The heads were washed in the spring here before being shown to the Chief of the Glengarry Macdonalds as proof that the murders had been avenged. The Gothic thirst for horror led the Victorians to exhume a mound in the area in the 19th century. Seven headless corpses were recovered.

The day was exceedingly warm and even my sun-loving friend, Sophie began to show the slightest sign of wilting. She had no problem in filling her water bottle from one of the becks .. she’s a brave woman. However, we were both grateful to come across a small party of people later in the day, having drinks on their lawn, so that we could ask them to refill our water bottles which had been dry for a couple of miles. We all agreed that the sunshine was extraordinary for Scotland. 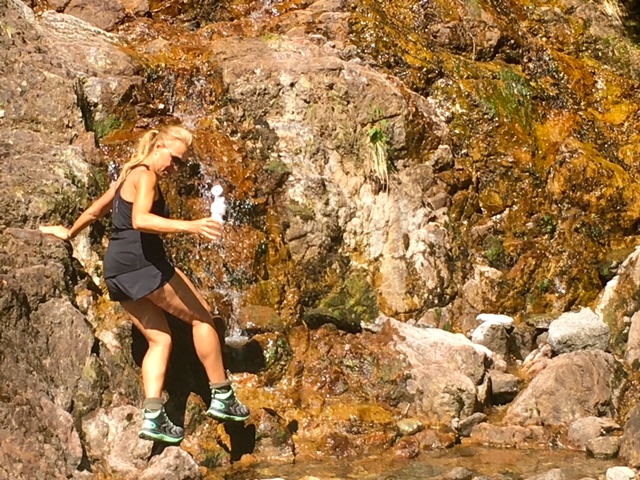 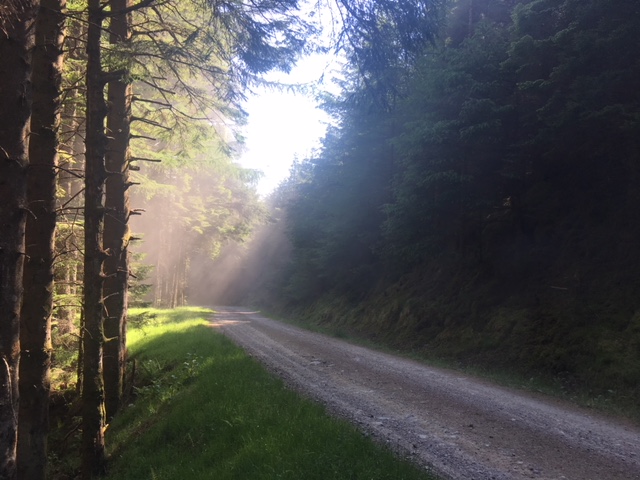 Coming to the end of the day

What with sartorial insults, gory beheadings and gruelling combat courses, it had been quite an X-rated day. We hoped that none of the violence would follow us to our hotel for the night in Invergarry. It’s a tiny village at the foot of Glengarry and while it took us away from the GGW, we knew the bottle of wine we planned to share and the comfy beds would be well worth the detour.

It had been a long and hot day of 15 miles, with two long ones of 17 and 20 to follow tomorrow and Thursday. But I’ve walked with Sophie on many occasions in the sweltering February conditions of Sydney, so feel quietly confident that we’ll be just fine. Especially as she is treating my pesky foot to many massages .. a sign of true friendship I feel, considering the less than desirable state of my feet after 77 days of walking. And for those kind readers who have sent messages of tips on how to deal with My Left Foot, we’ve come to the conclusion it’s a combo of tendonitis and plantar fasciitis giving me the trouble. The acronym RICE should do the trick, even if I can’t use much of the R at the moment.

Black Dog Tails
Earl worked alongside Lcpl Bradley O’Keefe in Afghanistan. He saved his and the lives of 13 others by detecting a bomb in the nick of time. The two have now retired from the armed forces and thanks to the persistence of Bradley’s sister, were reunited to live together. 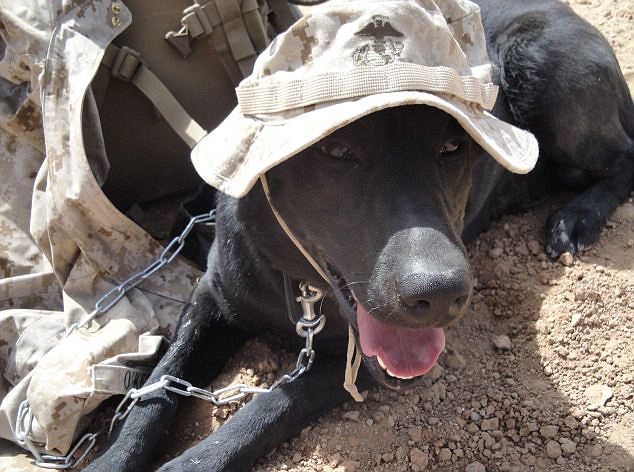