From: Invermoriston to Drumnadrochit
Distance: 15m/24km 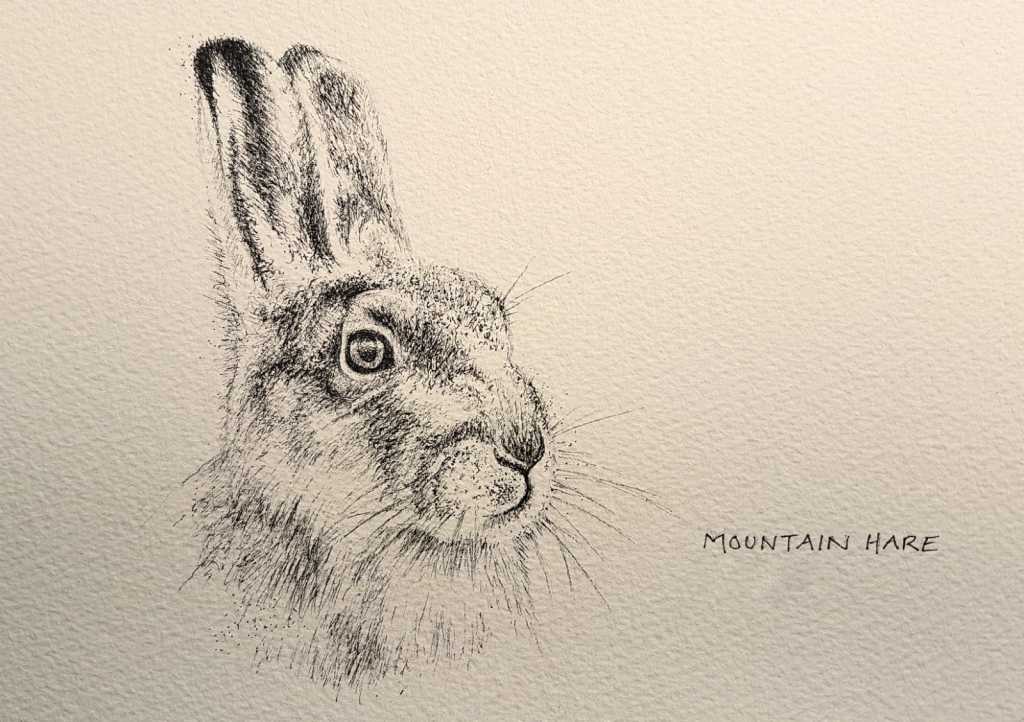 The hills opposite the Invermoriston Hotel were shrouded in cloud when we set out today. The walk started immediately with a very long, steep climb and I was glad I’d remembered Sue’s advice: Be bold: start cold. My legs had been a little chilly in shorts when I first walked outside but with the climb they were very quickly warmed up. 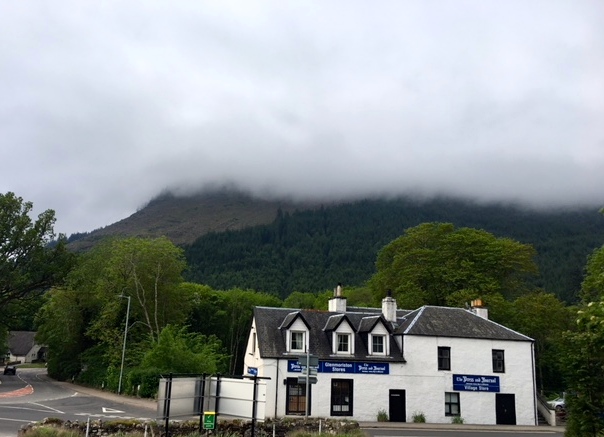 The corner shop at Invermoriston 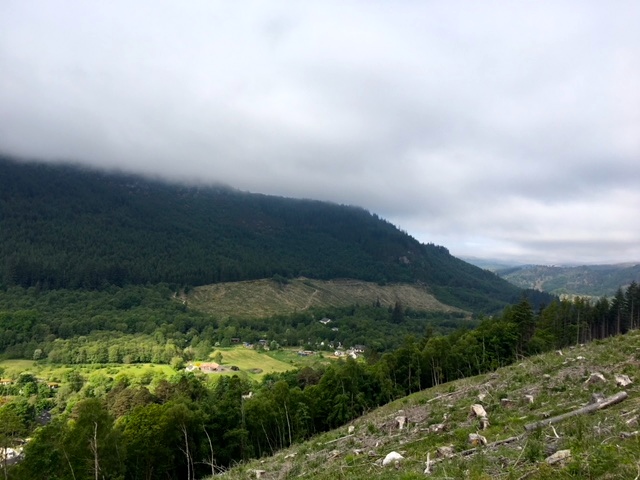 Taking the high road across an area of deforestation

We got the opportunity today to take the high road out of Invermoriston. It was a long, steep climb which zigzagged up through the forest of pines and birch trees. High up, we were eventually rewarded with intermittent views of Loch Ness. Sadly, we didn’t see too much more of the loch for quite some time. Trees and more trees were the order of the day instead and while I really do love forests I was disappointed not to be given the opportunity to see if I could spot Nessie from the tops. 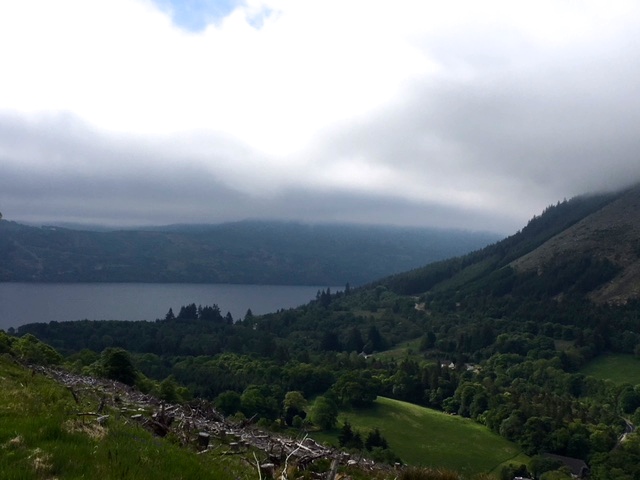 The sun took its time in coming out .. pleasing both of us: Sophie when it eventually came out and me while it took its time. We’re quite different in this respect! 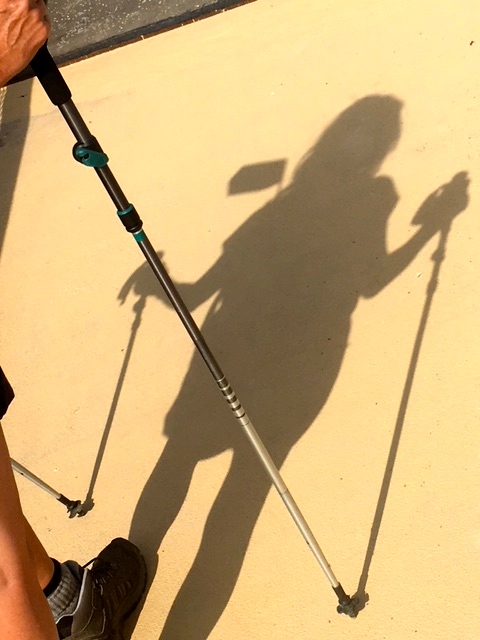 Our way took us past a cave made of stone built pristinely into the side of the hill. Had it been raining it would have made a fine shelter for a tea break, with it’s stone seating and comfy pine-needle flooring. This section has small areas of native pinewood and is an important habitat for pine martens, Scottish crossbill, and black grouse. It’s also home to a rare hoverfly, which may excite botanists but is unlikely to be as much of a thrill as a pine marten or red squirrel sighting for most people .. which sadly we did not see either. 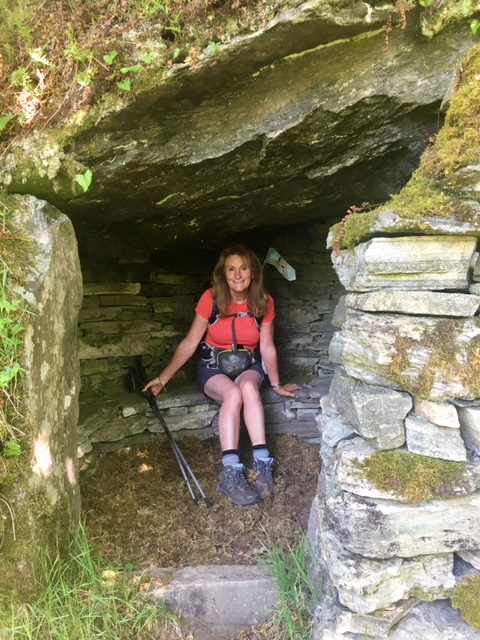 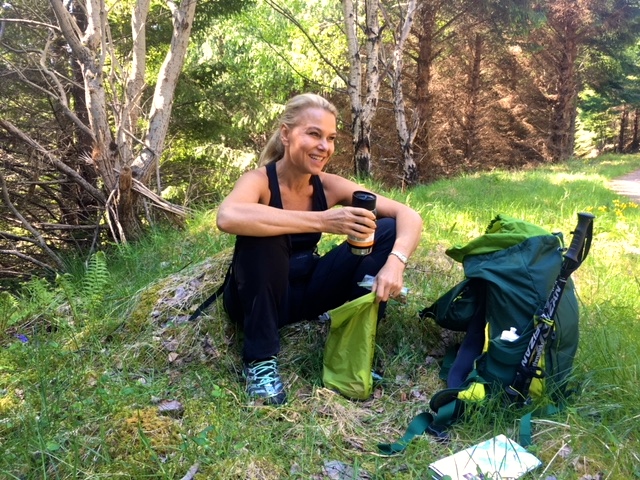 Tea-break in the sun

Further on we came across a sign by the stream at Allt-sigh. It told us that the last she-wolf of the glen was killed centuries ago at this spot. Nowadays, we often refer to she-wolves as those strong royal women who lived before Elizabeth I, being independent and refusing to do as the menfolk told them. The BBC in fact made a documentary about them.

In this case I’m sure the sign referred to the extinguishing of all grey wolves in the country. The wolf’s population has quadrupled in Europe since 1970, and the fact that they remain extinct in Britain is increasingly anomalous. With the return of the beaver, the success of the wild cat, a growing call for the return of the lynx, as well as an EU directive obliging governments to consider the reintroduction of extinct species, it may well be the time to return wolves to Scotland. David Attenborough certainly thinks we should. Yet 250 years since their eradication, the animal is still capable of inciting powerful feelings. Reintroduction would of course have wide-spread impact .. just for example, on the behaviour of red deer, It’s strongly believed they would become skittish and in turn graze less in open areas, such as the riverside. The knock-on effect would be less pressure on the wet-land grasses, allowing a regrowth of previously struggling species. It’s a complicated business playing with ecology .. let alone the effect it would have on wild campers. 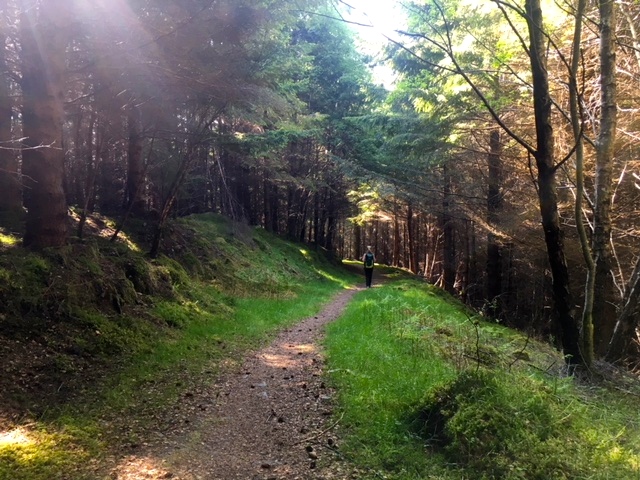 No sooner were we down at the loch side before we were zigzagging up through the forest again. 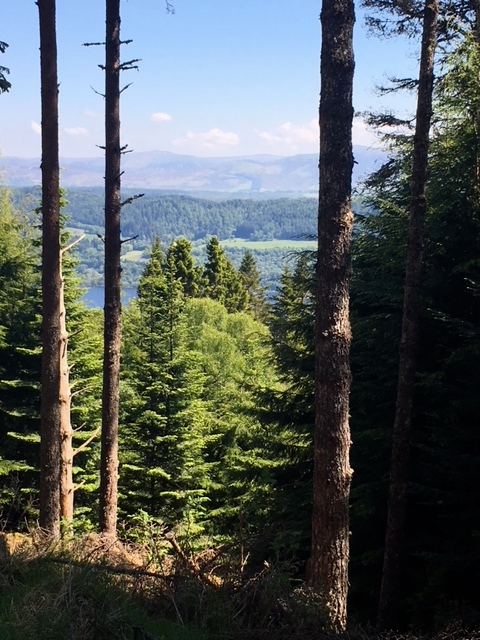 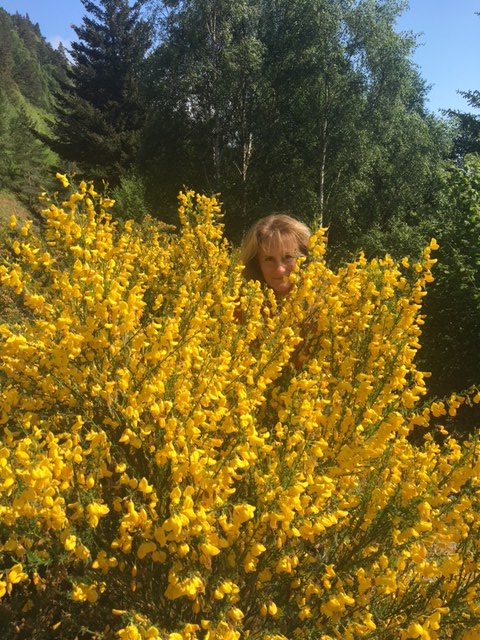 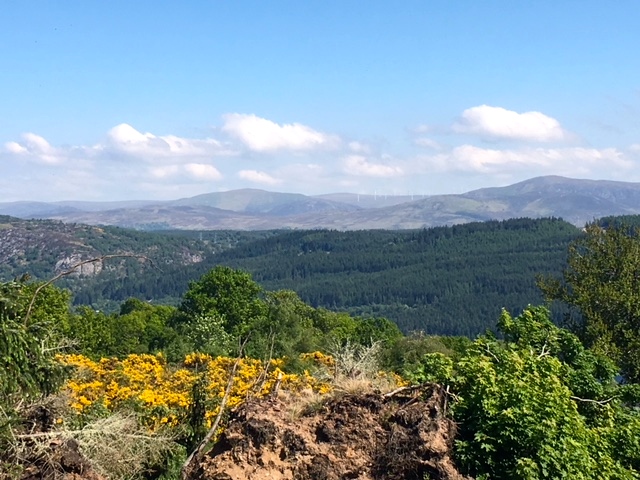 We wound our way down to the popular pottery and cafe we’d heard about from other walkers at Grotaig. We were not disappointed .. home-made cakes and espresso coffees gave us added energy to walk the remaining two hours, along the hot tarmac road. The scenery was pastoral and there were lots of animal treats along the way .. 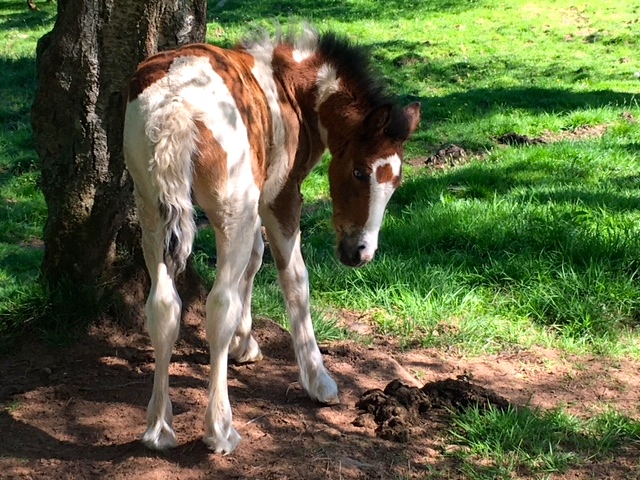 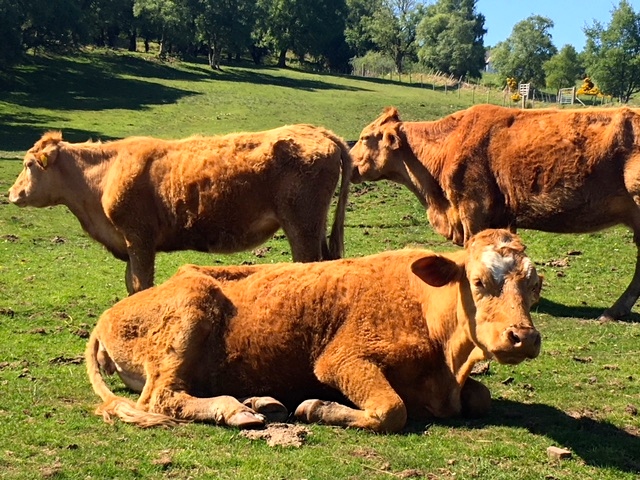 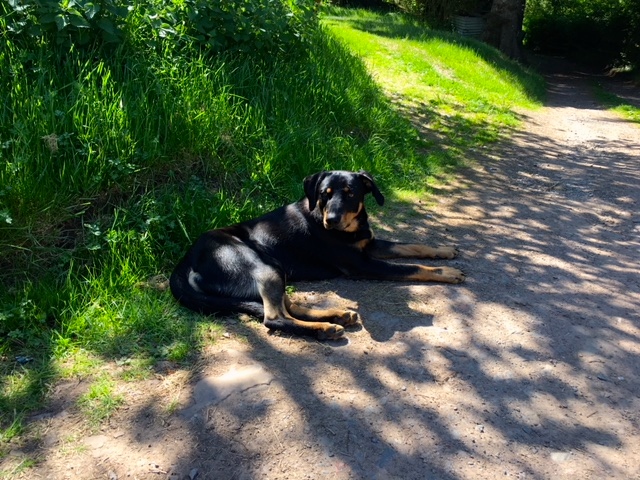 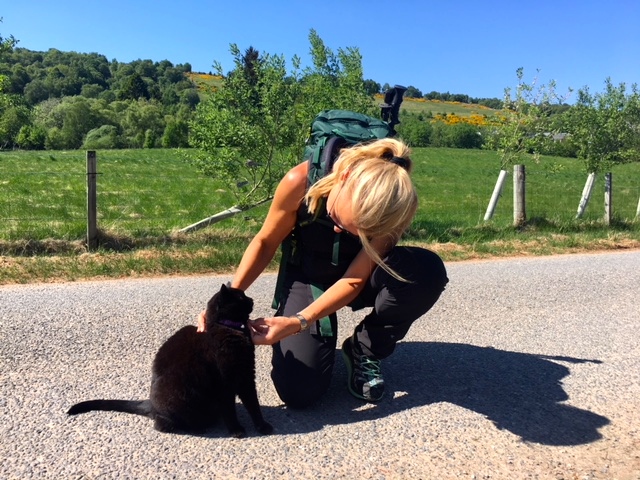 .. and a black cat, we christened Belle, for Sophie

Close to Drumnadrochit and our stop for the night, is one of the most romantic places in Scotland: Urquhart Castle on the shores of Loch Ness. It lies in ruins but is everything that John Ruskin would have called truly ‘picturesque’. The route of the Great Glen Way however, does not go via the castle and at the end of a hot 15 miles we decided to leave our visit till the following morning, when we were fresher and more able to appreciate the tumultuous history of the place.

All day long we had been practising our Scottish accent, wondering what Sophie’s cab-driver Rory would have to say about various bits of trivia. I was still very much in that mind-set when there was a knock on my bedroom door at The Loch Ness Inn, our stop for the night. Thinking it was Sophie, I replied in my best (but really the worst!) Scottish accent that she should come in. As my hands were wet I didn’t get right to the door and continued my conversation with her for a couple of minutes through the door. You can not imagine the embarrassment when I opened the door to find the landlady standing there. She was a true hostess .. smiling broadly before giving me the room key I’d left downstairs. Aye well …

Black Dog Tails
Google doesn’t record the name of this fine black hero dog who gave protection to spectators at the Thanksgiving Parade in Boston. 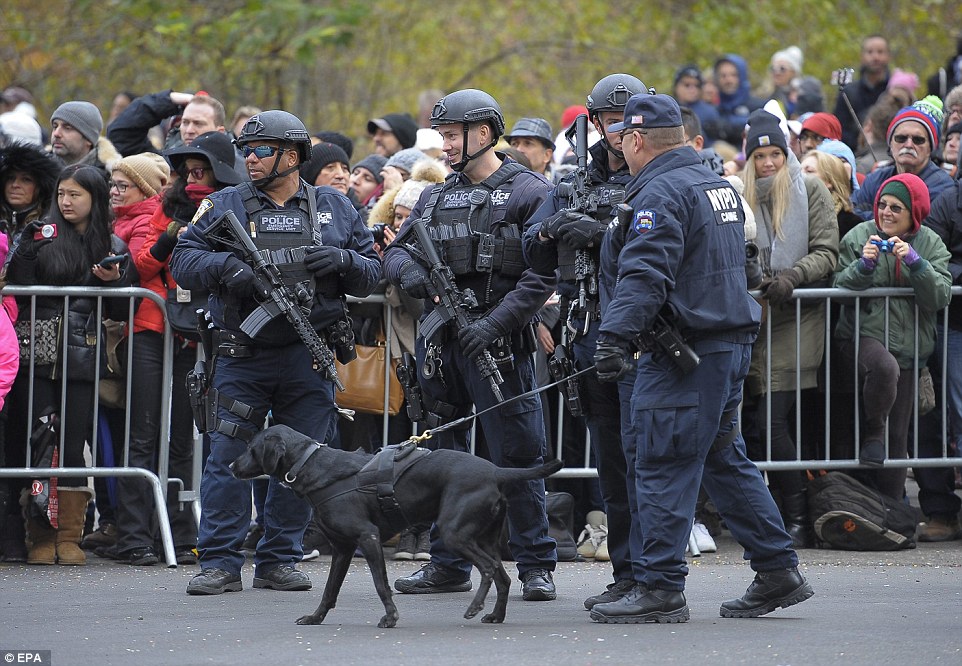