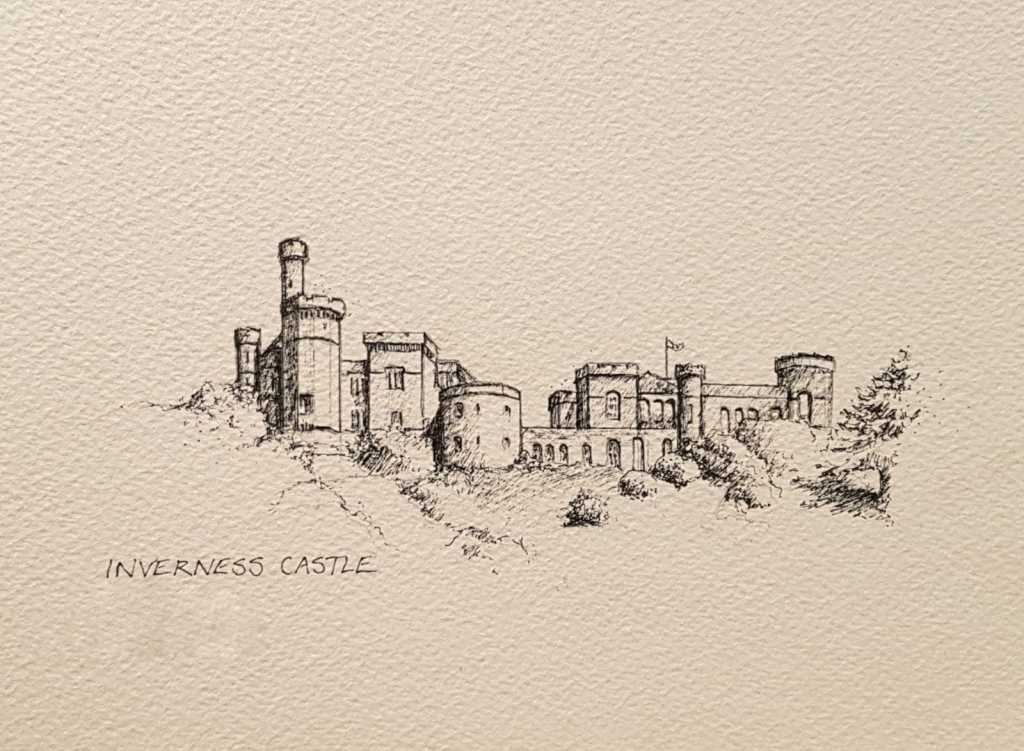 On our way out of Drumnadrochit yesterday we met Tweed. Tweed is the friendly black lab who spends his days sitting outside Ness Deli and Cafe, making friends with anyone who calls in to buy their haggis bap. We were just passers-by but he gave us an equally affectionate greeting. 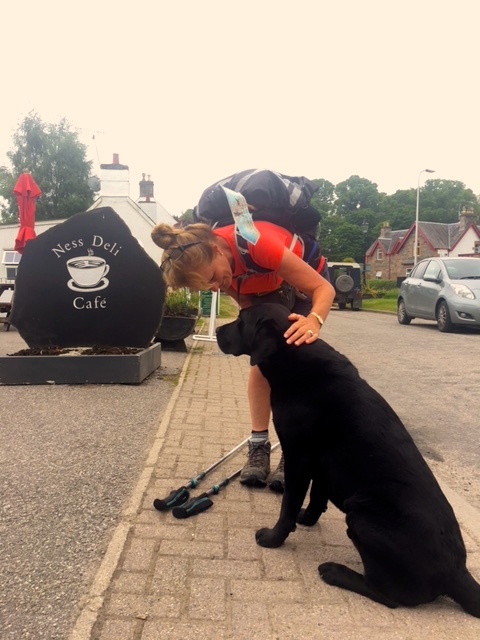 A hello for everyone

The mist blurred the lines of trees up the hillside and we felt sure this was much more how the real Scotland looked, rather than the sun-baked Highlands of the past few days. Once we’d left the village there was a little road walking, with jugaunauts creating an alarming suction effect as they swept past. We were relieved to reach the blue post with the sign of the thistle, ushering us up the hill on the continuation of The Great Glen Way. 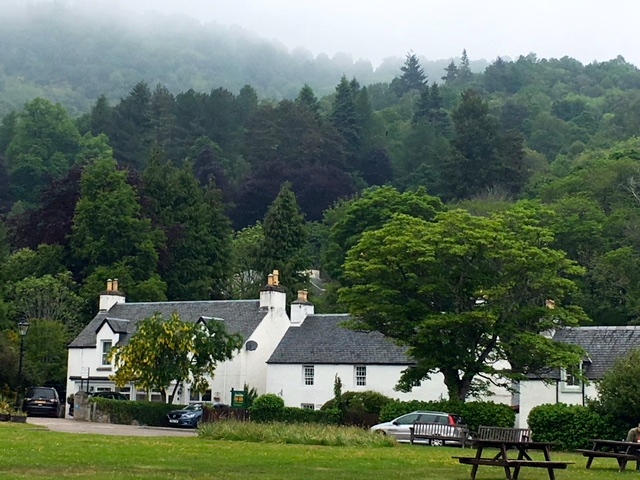 Drum, as the locals call it

Before long we had views across Urquart Bay, with the castle across the other side. In the mist it looked beautifully mysterious. 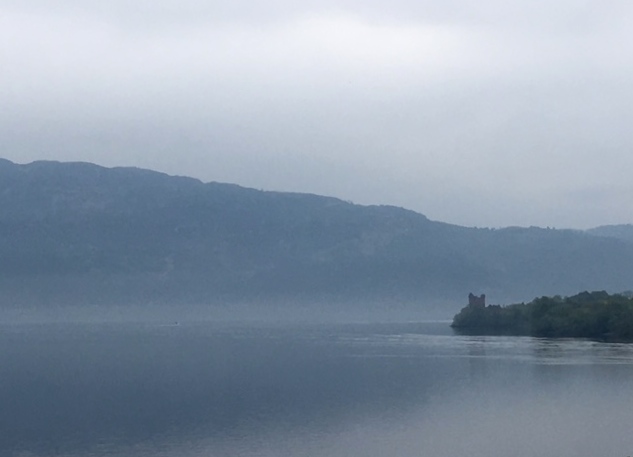 The castle saw great conflict during its 500 years as a medieval fortress. Ownership passed back and forth between the Scots and the English during the Wars of Independence in the 13th century. The power struggles continued, as the Lords of the Isles regularly raided both castle and glen up until the 1500s. The last of the government troops garrisoned here during the Jacobite Risings, in the meanest of spirits, blew up the castle when they left. Urquhart’s iconic ruins remain, offering glimpses into medieval times and the lives of its embattled residents. Quite extraordinarily, given the staggering beauty of the castle and its locale, only one film-maker has ever been tempted to use it as a set. ‘The Private Life of Sherlock Holmes’ saw the detective abandon 32A Baker Street for the Highlands. The castle is however, one of the most visited in Scotland. It is not difficult to see why. 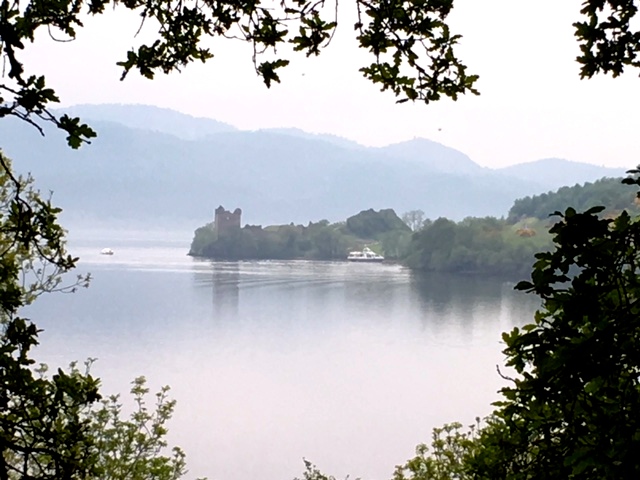 Old Etonian and RAF Group Captain, John Cobb brought fame to Loch Ness in 1952 when he attempted to break the world water speed record here. He’d already broken the land speed record twice. His powerboat Crusader reached over 200mph when it hit an unexplained wake in the loch. He didn’t survive. Pathé recorded the whole event. You can see it on youtube: ‘John Cobb Dies in Gallant Attempt on World Water Speed Record’. https://www.youtube.com/watch?v=aYrafKbTqV4 The images of Cobb, the loch and Urquhart Castle filmed in black and white are haunting  … in the space of 2 minutes it goes from recording the Queen Mother and the excited, smiling crowds wishing him well as he climbs into Crusader, to Cobb speeding down the loch and then just moments later, the devastating implosion. In true Pathé style the commentator remarked that Cobb didn’t undertake the task for his own glory but for his country .. ‘Because John Cobb was, above all else, a great Englishman’.

Along the trail there was another memorial to a man simply called Stuart .. humble but moving, in a little wooden glade. Somehow it underlined that we all play our part in life, whether it be as a world record breaker or as a quiet unassuming nature lover. 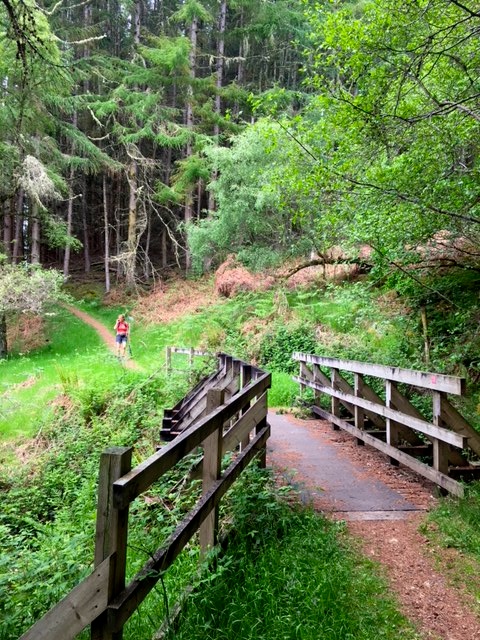 Walking through the forest

Meeting Travis, the dog with the waggiest tail

Emerging from the woodland we came out on moorland. I was keen to see if a man called Rory still offered pots of leaf tea just off the trail close to here. Other bloggers had written about their experiences of reviving char and chat with the man who owned the campsite and had planted thousands of trees in the area. But first we came to Abriachan Forest Trust, located just alongside the Way. As part of the trust there is a small school in a forest setting. The trust takes in groups from local schools to teach kids and young adults, in an outdoor environment ,how to develop self-esteem and interpersonal skills. The women we met were full of energy and enthusiasm for the initiative, which was wonderful to see. 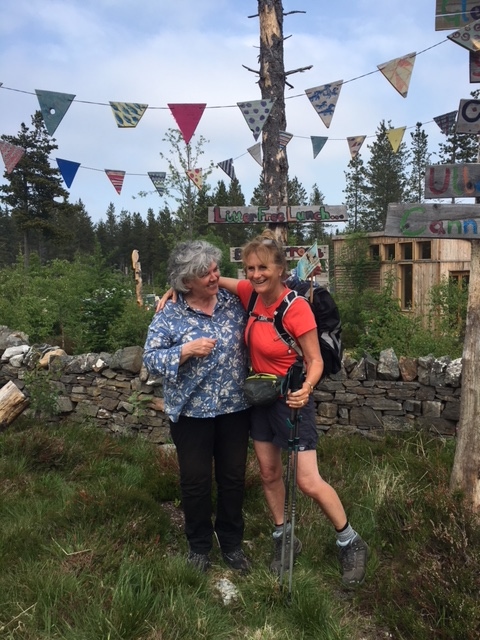 Vanessa posing for a rare photo at the Abriachan Forest Trust 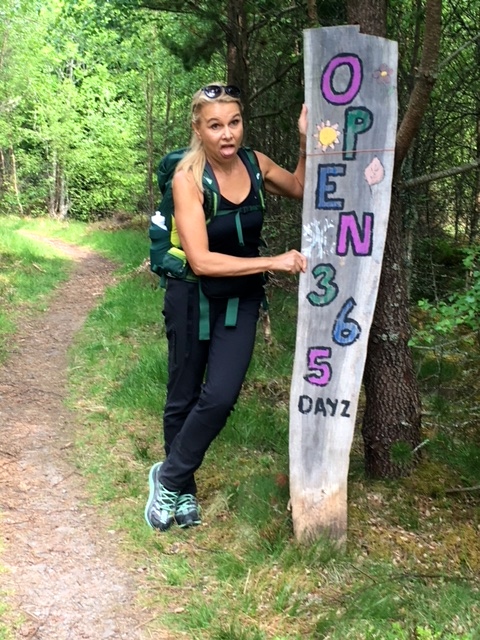 Just another few metres to go .. 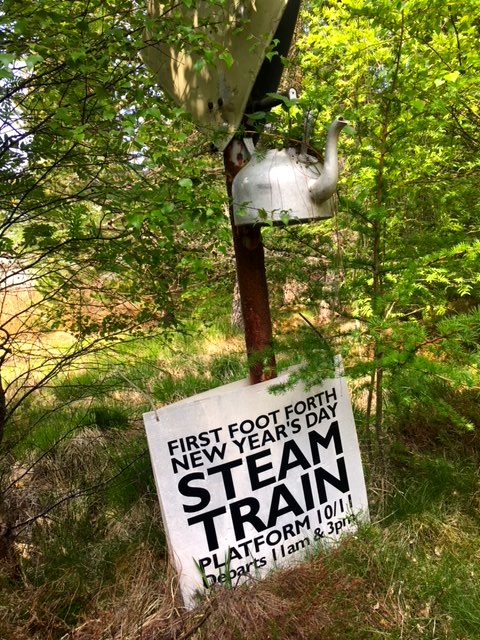 And finally the kettle pointed the way .. 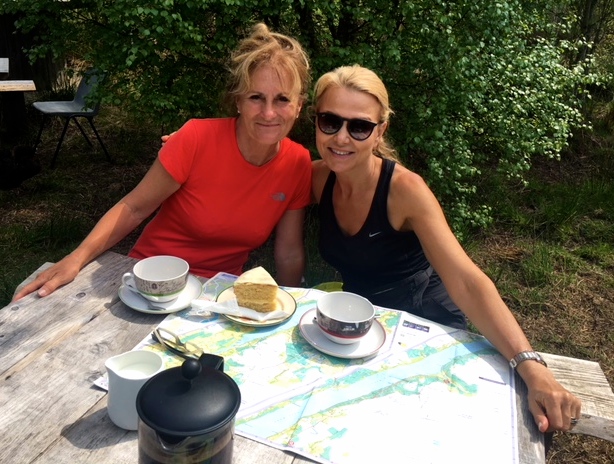 .. to the best lemon drizzle cake, coffee and hospitality

The trees in the woods beyond Rory’s place were less densely planted than in the forest of the morning. Plenty of grass and heather were able to grow between them and it felt more of a naturally growing wood. And then we returned to moorland, with views of the hills beyond. The soft ground was a welcoming walking surface even though my foot was complaining loudly at this stage. I shall always be grateful to Sophie for the engaging chats we had, which helped no end to distract me from the discomfort. 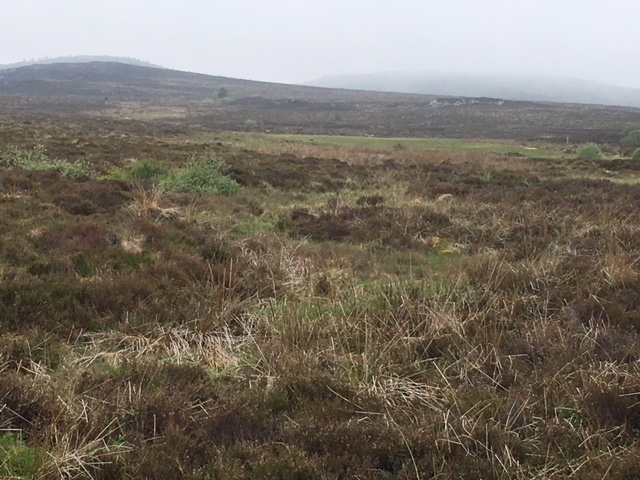 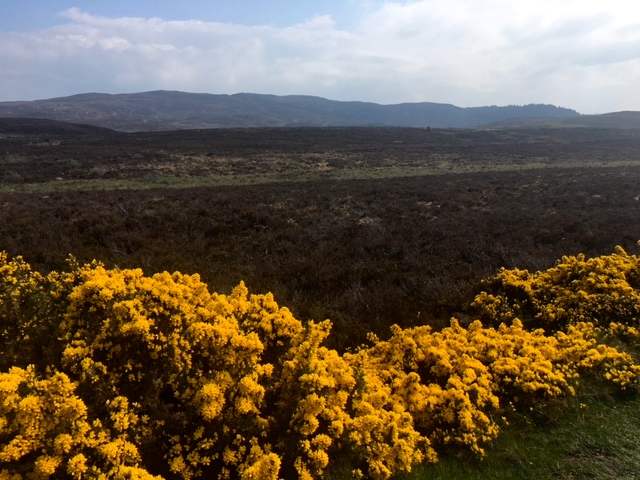 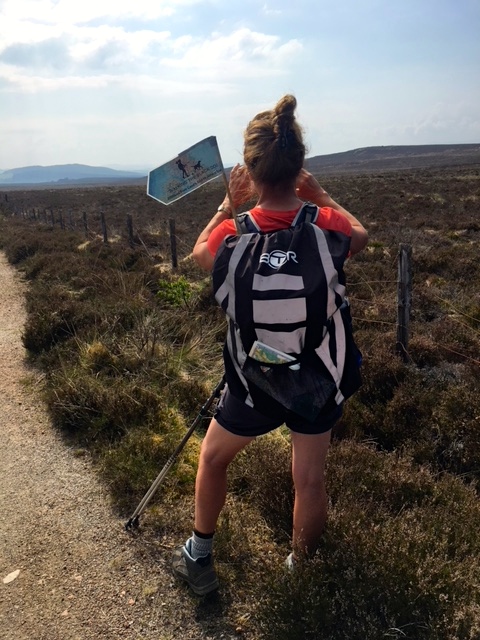 When the Caledonian Canal and the outskirts of Inverness finally came into view, I could not have been more relieved. Knowing the following day was to be a rest day was as good as having all my birthdays and Christmases rolled into one, even though I knew it meant that Sophie would be leaving. I have been so incredibly lucky all along the way to have such special friends join me on the walk .. friends from Sydney, as well as from England .. you have all been more comfort than you’ll ever realise. 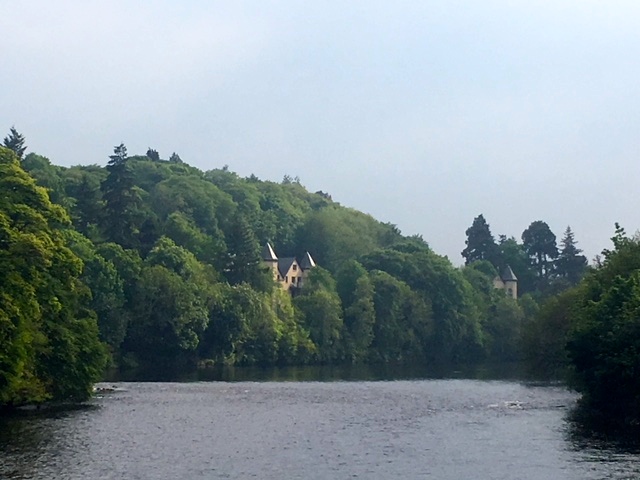 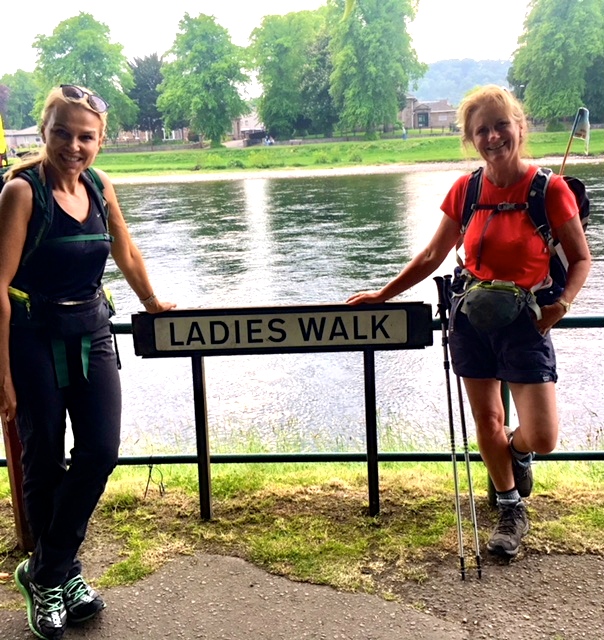 End of the day

Black Dog Tails
Inca was an everyday hero. The dog who’s there to greet you with the same thumping, happy tail each morning. The dog who lifts your mood no matter how you’re feeling. The dog who would do anything for you. He was the BBC presenter Ben Fogle’s dog, who reached all our hearts when he talked about how he cried and cried when Inca passed away. 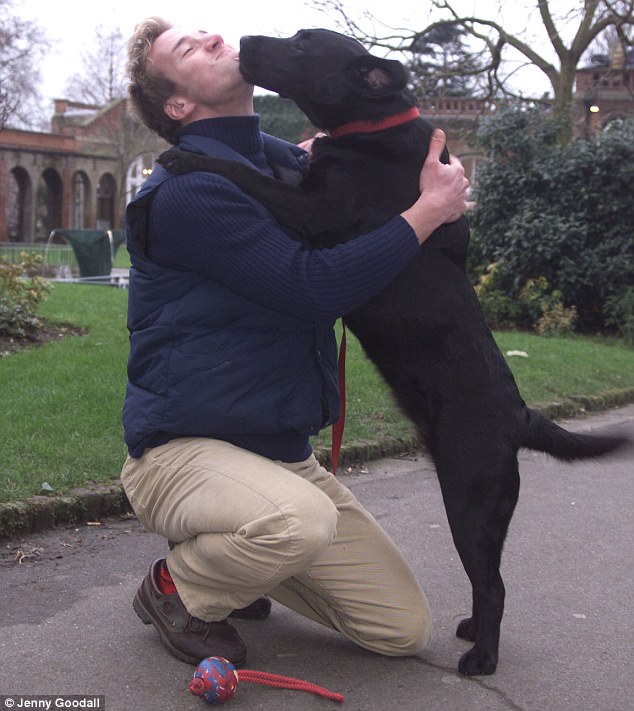