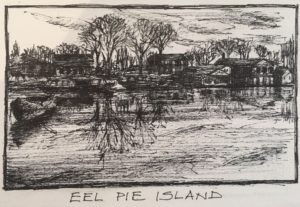 With a little help from my friends, the blog is now behaving perfectly. I spent day four of the trail with Alex, setting out in sunshine and ending with sunshine. Perfect.

Almost as soon as we started out we found the path flooded with runners, coming in droves from behind. Seemed they had the ludicrous idea to run 100 miles from Richmond to Oxford that day. 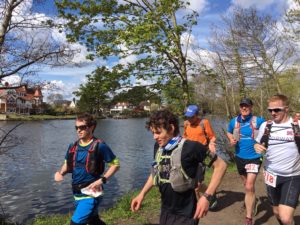 Around Richmond is truly one of the prettiest parts of the walk, with the Thames still tidal and flowing past some magnificent houses, including Marble House and Ham House. The first was built for Henrietta Howard, mistress to George II. It has the most fabulous Georgian symmetry and is apparently exquisitely restored inside. You can book it for parties .. I’d be keen! Ham House was built in 1610 and so a Stuart house (sorry Mark, they just couldn’t spell in those days). It was home to William Murray, the whipping boy for the future Charles I in his youth. This poor boy got it in the neck every time Charlie Boy was caught smoking behind the bike sheds. Believe it or not they became the biggest of mates in adulthood but William must have refused to put his head on the line when the scaffolding was erected. 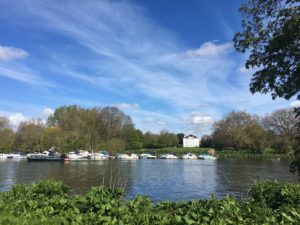 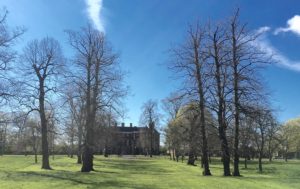 Eel Pie Island was the next landmark. The pies served by the hotel on the island became legendary in the 1800s. And then the island became a huge attraction in the 1960s for singers and bands such as Clapton, Pink Floyd, The Who and Led Zeppelin. But after the hotel mysteriously burnt down amidst whispers of bankruptcy, the island returned to its former sleepy self.

We then passed Teddington Lock, note-worthy as this is where the river ceases to be tidal and from where the trail continues on only one side of the river, crossing at various stages from bank to bank via a wide array of bridges. (Take note, gentle reader!) 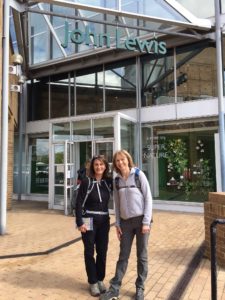 Resisting the John Lewis temptation with Alex in Kingston

After I’d rather forcibly had to steer Alex away from John Lewis in Kingston, we continued along the path, imagining Jerome K Jerome and his chums setting off on their ‘Three Men in a Boat’ journey, from Kingston to Oxford. To say nothing of a dog called Montmorency.

A mile on, we remarked how we seemed to have lost the runners .. and only at this point did we realize that they had crossed the bridge at Kingston, in the way that we hadn’t. Bother! Turning tail we retraced our steps, having cappucinos en route, crossed the bridge and walked along the right bank to Hampton Court Palace. 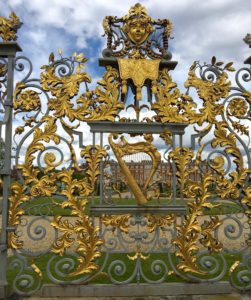 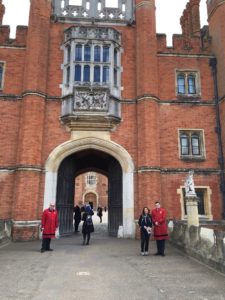 Patrick and I had lived in East Molesey at one stage and views of the Palace brought back happy memories of visiting the Tudor kitchens and the William and Mary state rooms. 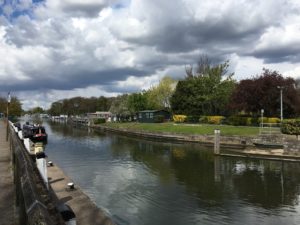 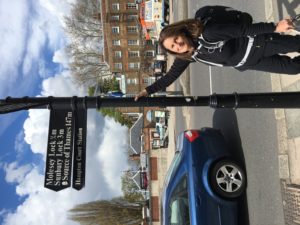 By this time our tummies were rumbling and lunch was in order. We found the perfect spot at East Molesey Cricket club and were able to watch the home team trouncing Walton upon Thames in the local derby. Yay! 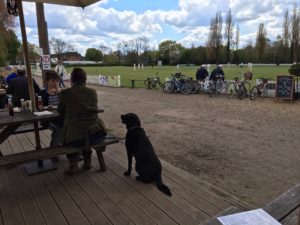 Labradors and village cricket .. perfect place to stop for lunch

And now dear readers .. a couple of mysteries for you to solve .. 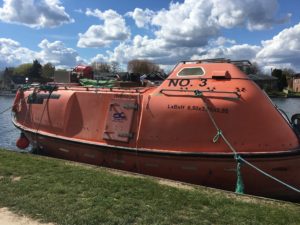 Any guesses as to what this is? Answers on a postcard/blog .. 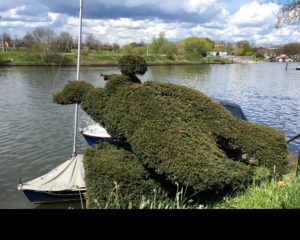 And just what do you think the topiarist had in mind when he started chopping? Is it a bird, is it a man … 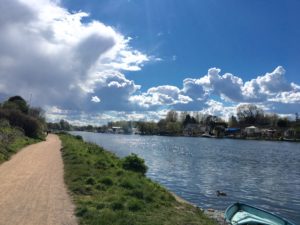 At Shepperton I waved Alex off at the train station and went to find my bed for the night, which was nestled by the side of the river. The bath was deep and hot and the sunset afterwards very pretty. 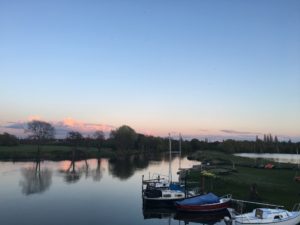 A sweet little Border Terrier won dog of the day, although there was stiff competition from a bevy of beautiful black Labs at the cricket. I couldn’t get any of them interested in posing for me however, as it was lunchtime and they had to keep a sharp eye out for any falling tidbits. 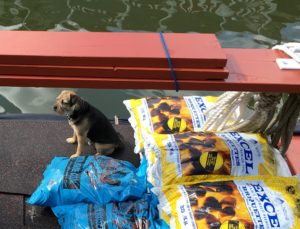