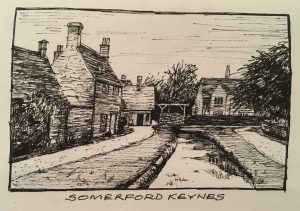 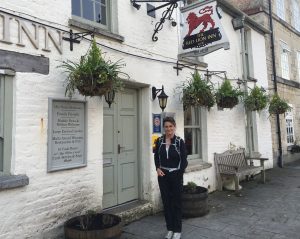 Warm, dry and ready to discover The Source!

To give you some idea of how much water we were prepared to encounter on this last day, take a look at the map .. did you groan as much as my sister when she first saw it? 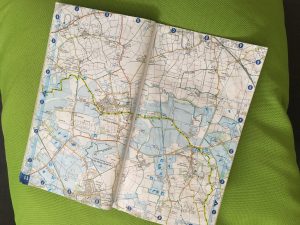 Map of the day 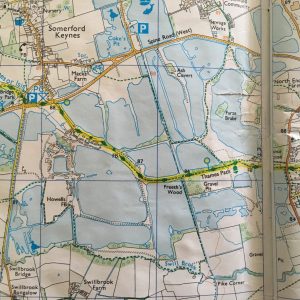 The path is marked in yellow!

Given how much rain had fallen in the previous 48 hours, we knew there was very little chance there would even be a path to follow, let alone keeping dry. Still, the sun was shining, the sky was blue and we felt happy just being together. 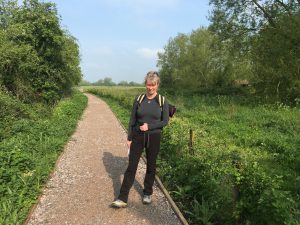 Dry feet, dry path .. not for long though

The Red Lion at Cricklade had served us well. Probably too well in fact, as we were able to give the breakfast one of Angus’ global gold star awards for their magnificent Eggs Benedict. The Saxon town of Cricklade looked sparkling in the spring sunshine as we walked down the high street to rejoin the path. Ermin Street, the old Roman road, lies not far away and once connected Newbury with Gloucester. Cricklade means ‘place of the river crossing’ and even back in BC days, it was a wet place and could only be negotiated with substantial difficulty. Roman engineers solved the problem by building a raised causeway to cross the marshes and a settlement evolved on the south bank. Even after the departure of the Romans, the town continued to develop and it became a full Saxon Borough in 887. King Alfred formed a garrison in Cricklade to protect Wessex and records reveal that 1500 men were stationed in the town at that time. The security and significance of the town can also be measured by the fact that it had its own mint, which produced coins until 1100.

Sandwiched between the Trail and the A419, is North Meadow. I have been longing to see this uncultivated meadowland, renowned throughout the botanical world for its amazing Snake’s Head Fritillaries. Approximately 80% of all the wild plants of this species in UK grow in North Meadow. We were passing through at just the right time of year to see them in full bloom.  At one time they were picked and sent to Covent Garden but this is no longer the case, as they are considered an endangered species. 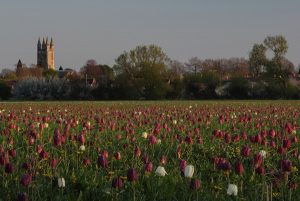 Sadly, the picture above was not what we found. Instead this was the note posted on a gate into the meadow. 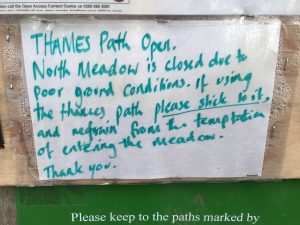 The meadow is 110 acres in size and normally there are masses of colourful flowers, including adder’s tongue, great burnet, water crowfoot, celandine, marsh marigold and buttercup. Today it is water-logged and all that we can see is clover and dandelions. 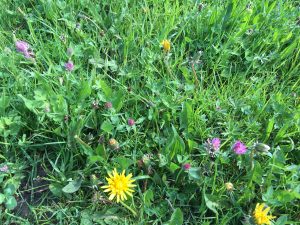 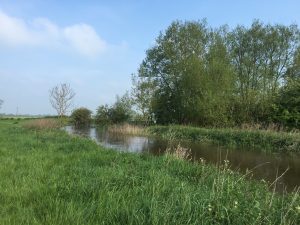 The Thames is considerably narrower than yesterday and we consider how easy it would be to pole-vault across. With the sunshine and the puffball clouds, the sight is a rural idyll. However, there is a low-level apprehension in the air, as we turn the page of the map to Manorbrook Lake. 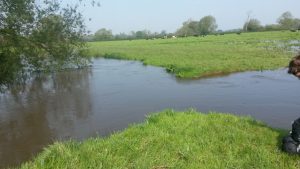 Almost immediately we come to an impasse. And this is where we discover that I’m the reckless sister and Helks, the younger, is the sensible one. Our feet are dry and she is determined to keep it that way. ‘Let’s retrace our steps and find another way round’, she suggests. ‘But that way we won’t be following the Trail’, I say. ‘Bugger the Trail’, she ventures but then seeing how disappointed I am, she agrees to try going through the river before us. Trousers rolled up above our knees we step gingerly forward. And all too soon, we’re in, way above our knees on exceedingly uneven ground. There is a flow to the water and we realise just how easily we could fall over and get everything soaked. Clutching on to one another, fodder for a sitcom, we climb out on to the grass. ‘Nothing ventured, nothing gained’, I tentatively say .. but she’s not impressed with me! Back to Plan A.

My map-reading saint of a sister finds us another route which is not half as wet and after climbing through barbed wire, we rejoin the Trail. It feels bizarre to have such wet legs and feet on such a warm, sunny day. 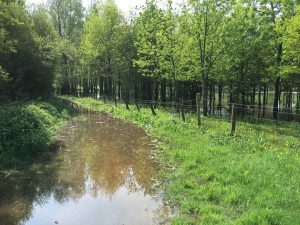 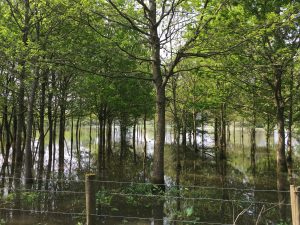 No chance of taking an alternate route

We walk on, making very slow progress along the completely flooded Thames Trail, masquerading as the Thames itself. I try to cheer Helks up by telling her a bit about the area, known as the Cotswold Water Park. There are 140 lakes which make up the park, covering around 40 square miles. It is claimed that the complex is the largest inland man-made water feature in Europe. Quite impressive .. except that she’s not impressed. Just wet.

The lakes were created by the quarrying of gravel and sand. The high water table in this area naturally fills any hole more than a metre deep. Today, seven different mineral companies extract 2 million tonnes of gravel a year and there’s still 50 years of useful mineral resource waiting to be dug out in the area. In the sixties it was decided to make the area into a nature reserve, disguising the man-made, rectangular shapes of the holes and introducing planting and wildlife. It has been a huge success and the Park now attracts anglers, bird-watchers, walkers with and without dogs, boating types and cyclists, along with a huge variety of animals and plants. My sister points out that cyclists would find it hard making progress today. She’s very wet and her boots are of the old-fashioned, stout variety which makes them exceedingly heavy. Instead of distraction I realise that lunch is the way to bring a smile to her face. 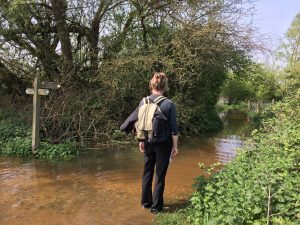 We arrive at Ashton Keynes in the nick of time. Despite the landlady being one of the least welcoming along the trail, the sticky toffee pudding is a joy and we leave feeling restored when we step out of the White Hart. A few yards down the road we find a bench and remove our shoes and wiggle our toes in the sunshine. The river is doubled in size by the water we wring out of our socks. 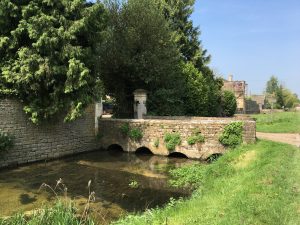 The village of Ashton Keynes is very pretty. The Thames runs through it, dividing the village neatly in two and for many residents, the access to homes is across cute little bridges. The village takes its name from the de Kaines family who, together with William the Conqueror and others, supplanted the Saxon settlement. Over the centuries it has flooded frequently and it is very easy to see how.

As we make our way out of the village we come across an old stone ‘Preaching Cross’. There are 4 such crosses in the village, indicating that the parishioners were either very holy or in dire need of salvation. 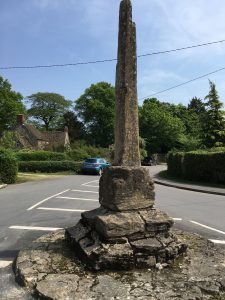 It is a magnificent afternoon .. warm and clear, with the Thames softly gliding at our side. Yellow iris grow on the banks and drifts of tiny white flowers mass on the surface. 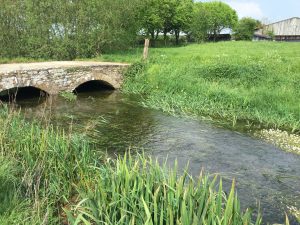 ‘Sweet Thames run softly, til I end my song’ 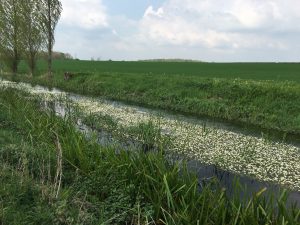 After the man-made lakes we return to fields and woods, with the river weaving its way along between. At Mill Farm we sit down to take stock of the buttercup meadows around us. Helks draws out the last remaining opal fruits to celebrate turning on to the last page of the trusty book of maps. 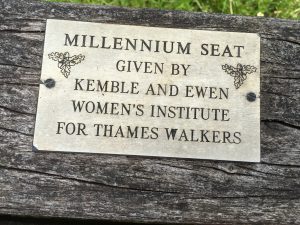 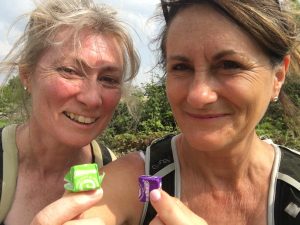 All too soon, after crossing Parker’s Bridge, the Thames has become a stream. A sweet stream running south through the meadow. It would be easy to simply jump across the water now, without the aid of a pole-vault. 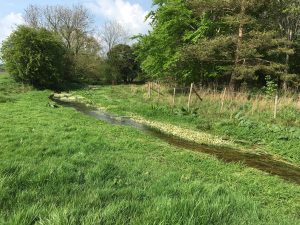 Sweet Thames down to a stream 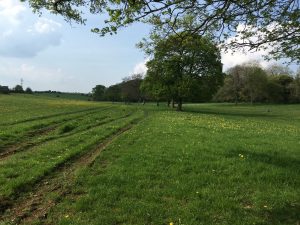 The end is in sight

After crossing the Roman Fosse Way, we come to the final two fields which will lead us to the source. The late afternoon light is gentle and it feels aptly poignant to be arriving at the end of the Trail, with not a drop of water in sight. 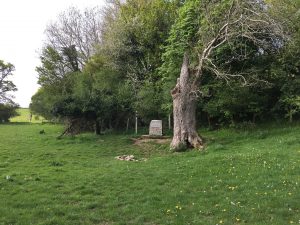 The plaque, the ash tree and the Roman well.

I have climbed 361 feet and walked 184 miles. It has truly been one of the most rewarding and beautiful things I have ever done. It feels good to have my sister by my side at the end.

Dog of the day .. there are ten of them. Best to go out with a bang. We met this dog-walker charging through the water with a complete smorgasbord of four-legged beauties. 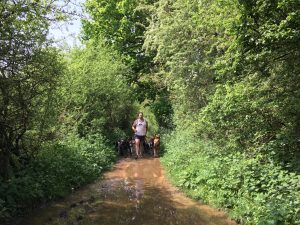 Man with a mission and 10 dogs of the day!

Thank you so much to all my lovely readers. I will return with some reflections in a couple of weeks. There will be an alert.