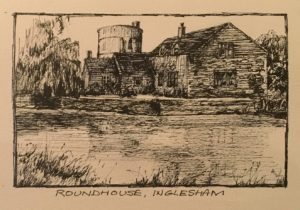 During the night it poured and poured with rain. It didn’t bother to pause as dawn broke. The day had clearly arrived for my sister to join me .. it always pours when we walk together, usually forcing us to take tea or resort to retail therapy. It did last year in the Lakes and the year before in The Cotswold Water Park, which .. wait a minute .. was where we were headed on the trail today!

Putting it off for as long as we could, at nine o’clock we could think of no more excuses. Tony kindly dropped us back in Lechlade and then retreated to his warm, dry office, where even Woody had refused to venture out. Sensible dog.

Lechlade is a pretty town, even though it is rather swamped by charity shops .. not uncommon in this day of big malls and shopping centres, taking business away from smaller communities. The town was mentioned in the Domesday Book and was a big player in the wool trade. However, its main function was as a staging post for freight to London. The bridge is the first of the 107 navigable bridges that span the Thames on the way to the capital. Gloucestershire cheeses and Cotswold wool were the main products brought to the wharves for transfer to London.

For Helks and I, Lechlade Church seemed a reasonable option, as we waited with dim optimism for a break in the clouds. Churches these days can often be warm, welcoming places used for many events other than religious services and we were pleasantly surprised to find a mother and toddler group having coffee in the nave at St Lawrence’s. A sweet little boy careened up to us on his tricycle and asked hopefully, ‘do you have any children?’ Once he’d established that we hadn’t brought along any likely playmates, he lost interest and returned to playing hide and seek among the pews. 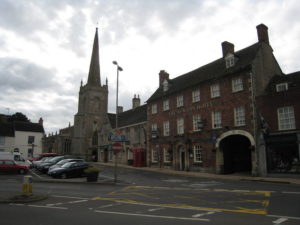 The church is one of the prettiest in the area and its elegant spire had been visible to me on the horizon for miles the previous afternoon. It is a late medieval church and is believed have been dedicated to Saint Lawrence by Catherine of Aragon. Lawrence was martyred on a grid, if my Art History memory serves me correctly .. not sure what Catherine’s connection to the unfortunate saint was. On the floor are brasses of past local celebrities and Helks and I fondly remembered spending school summer holidays taking rubbings of similar ones at churches in Leicestershire, where we’d grown up. 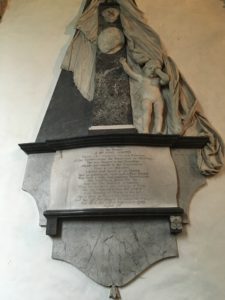 Close to the choir was an epitaph to a woman called Mrs Anne Simons: ‘A gentlewoman who was sincere in her friendship, Affable and candid in her conversation, Pious in her devotion, Liberal and secret in her charity. Her acquaintances have lost a real friend, The poor a daily and constant benefactress. She lived to a good old age, And though she declined gradually, Through the weakness and infirmity of body, Yet she retained a cheerful temper, And vivacity of spirits to the last.’ She died in 1769 and Helks and I agreed she would have been a lovely person to have known.

The church is also noteworthy for the visit it was paid by Shelley in 1815. Standing in the churchyard, watching the setting sun with his wife, he was inspired to write, ‘Summer Evening Churchyard, Lechlade’. It’s a beautiful poem about the serene ensuing night.

After we’d had lattes in the cafe, looked in the windows of a very enterprising Post Office and mooched around the local antique shops, we decided there was nothing for it but to walk and get wet. 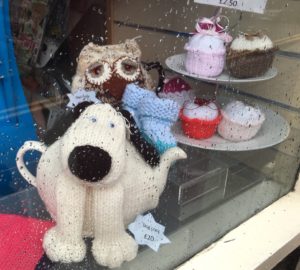 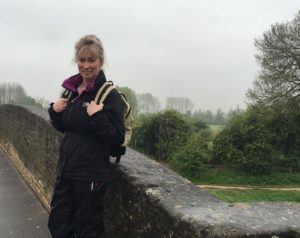 Helks starting out from Halfpenny Bridge

The charming name of Halfpenny Bridge, where the walk resumed, naturally derives from the original levy, payable by those wanting to cross the river. The tiny toll house on the bridge bears witness to this. It was an unpopular toll and in 1839 there was a show of strength as local people demonstrated against it. Bands of people continued to cross the bridge, causing great consternation for the toll-collector. It took a couple of generations until 1875, before the fee was dropped and the toll-house has remained redundant ever since. 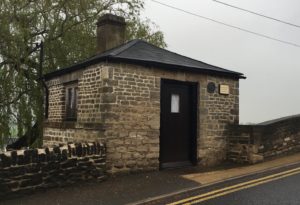 The toll house on Halfpenny Bridge 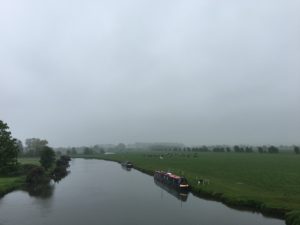 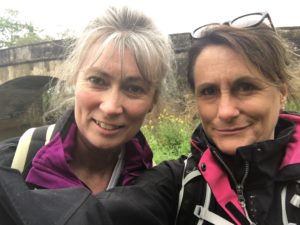 Less than a mile upstream we come to Inglesham, noteworthy for The Roundhouse and a jewel of a church. To the right of The Roundhouse lies the disused Thames and Severn Canal, which still continues to flow into the Thames. The tower is a curious sight and a bit of probing reveals that the Roundhouse was once used as a watchtower for the lengthman, the person responsible for the smooth running of the stretch of canal between Inglesham and the next lock. From his elevated position, the lengthman could watch the canal traffic, at times very heavy, and assist with any problems that arose. Mixture of traffic warden and port master, I guess. In order to make sure said lengthman didn’t get too comfortable in his posse and become neglectful of his duties, there was no fireplace built in the Roundhouse. Bit mean. 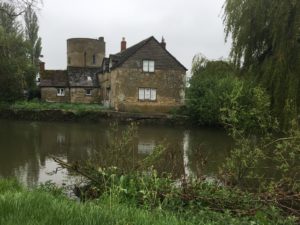 Between the Roundhouse and the  church, we had to walk past a lovely looking house with the most unusual sculptures. Either Tracey Emin or Damien Hurst had been let loose in the garden. 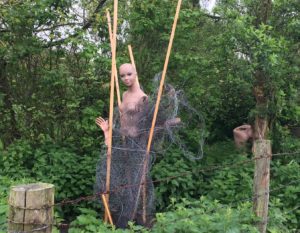 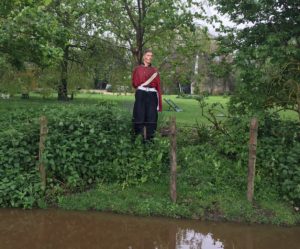 Inglesham Church fell into disrepair in the 19th century. William Morris who lived at nearby Kelmscott Manor, was keen that it should be restored to look as it had done when it was built in the 13th century. After a protracted tussle he won the locals over and the church was renovated to look just as it had when it was first constructed. Inside it is a glorious testament to the Arts and Crafts Master’s vision, with its boxed pews and wall paintings. Tiny as it is, the Church of St John the Baptist is a complete joy to visit. 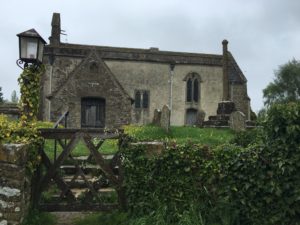 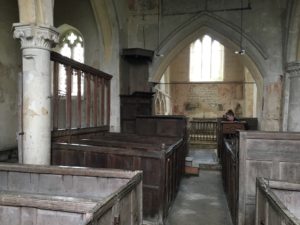 In contrast to the eulogy to Anne Simons in Lechlade church, the few words on the memorial to Vicar Stanhope Bruce in Inglesham church, left us in no doubt that we would not like to have been one of his parishioners. ‘He was scrupulously exact and conscientiously faithful in the discharge of every public and private duty’. Stanhope lived to 93 years of age and we were willing to wager that he rooted out every sinner in the parish. 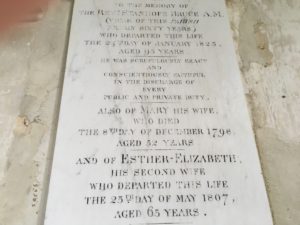 Due to the pig-headedness of a local farmer, the Thames Trail from this point is forced inland and joins the very busy A361 for over a mile. It is an unpleasant stretch of the route, especially on this wet day when jugonauts speed past, spraying Jackson Pollock rainwater designs across us. It seems such a travesty that one land-owner can ruin such a beautiful walk for so many.

Eventually we rejoin the path, which is very puddled by now. Once we leave the road behind, all becomes quiet and the grass around us is lush and green. Suddenly, from the left there race two roe deer, running the entire length of the field in front of us. It is another magical moment which we watch together in complete silence and utter joy. 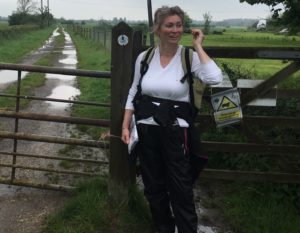 The path ahead is wet 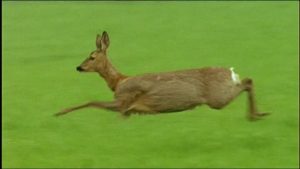 The rain starts to fall more heavily, even though it is not cold and we start to think of a late lunch stop. The Victorian Red Lion at Castle Easton is the obvious stop and we enjoy delicious homemade soup in the ‘first pub on the Thames’. The rain continues to fall as we walk on after lunch and the path soon becomes submerged in water. A lot of water. It’s not long before our feet are wet through and progress becomes very slow. My sister likens the shoes on her feet to household bricks. 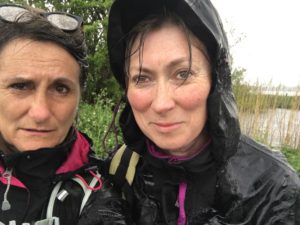 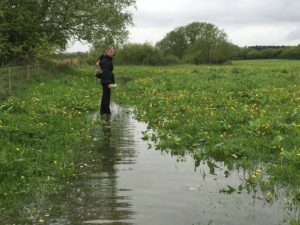 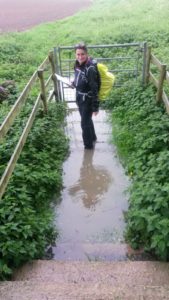 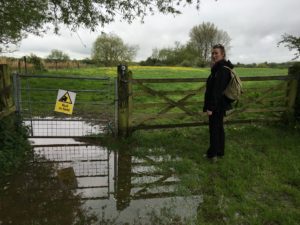 After another four miles, Cricklade and the end of the day is in sight when we come to a sign on a gate, through which we must venture, which neither of us like .. ‘Bull in Field’. Given my experience of the previous day and Helks’ paranoia of bulls we have to dig deep in order to push open the gate and take our chances. The pull of a bath, dry feet and a glass of wine in the bar help us overcome our fears, to get to the other side of the field. Thank goodness neither of us is wearing red .. or is that all a fallacy. 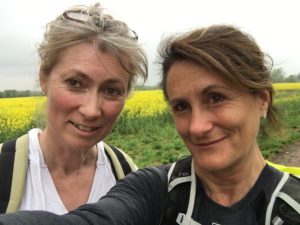 Towards Cricklade the rain cleared and we were able to have another go at a selfie. Our children would be impressed to see that we’re getting better at this! 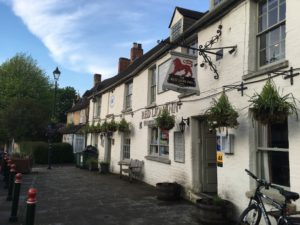 We reach Cricklade and the 16th century Red Lion pub at the end of the day. The rain has cleared and the sun has come out to create a mellow light on the cotswold stone on the high street. Dried off and clean from long, hot baths we enjoy the delicious food of the wonderfully hospitable Red Lion. And then there is ‘the deep sleep of good children’.

Dog of the day .. not a single dog ventured out in the rain today that we met and so we were stuck with the pub’s permanent fixture. Name suggestions on a postcard, please. 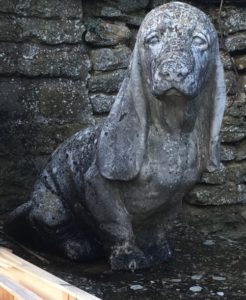 In the absence of all others ..