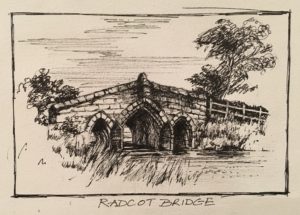 OMG! The skies are grey and there is rain forecast .. I don’t remember ordering a wet day, especially for 17 miles by myself! Ah well, the night has been comfortable at The Rose Revived and I feel suitably refreshed and ready to forge on ahead. At breakfast I sit next to other walkers, going the right way, of course. They are £10 pound Poms who have lived in Melbourne for over forty years. Speaking about their previous day, they say it is long and lonely, with not a whole lot to see. Hmmm. 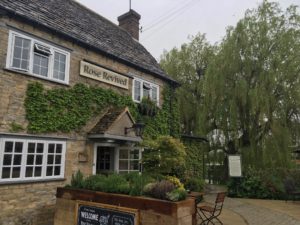 With my waterproofs repacked to sit at the top of my backpack I set off. It’s the last day walking by myself and I have a distinct sense of melancholy .. I really don’t want the adventure to end. I have loved waking up every morning with such a sense of purpose and only the walk on my mind. The daily routine, with no choice of route or clothing to think about and a heightened awareness of nature around me, has been meditative. In fact it is what Mindfulness is all about .. living in the moment, dwelling neither on the past nor the future. No wonder it feels so good. 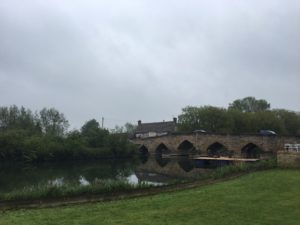 It is indeed a ‘soft’ day, as the Irish would say. One my Dad would have particularly enjoyed. He loved walking in the English countryside, even in the rain, but he had a huge dislike of wind, claiming it played havoc with his hair. He wasn’t a vain man but he did have a lot of hair.

A couple of miles into the morning I come to Shifford Lock and weir. There is some evidence for King Alfred having held a witan or English Parliament here in 890. Extraordinary. Much later, in the 19th century, Shifford Lock Cut was opened. Until it was created, the river looped south to Duxford for one and a half miles, into shallow waters, creating substantial problems for boats travelling further upstream. The whole project was conceived of and completed within 18 months .. pretty impressive when you look at the work involved and without handy monks to work on the job. 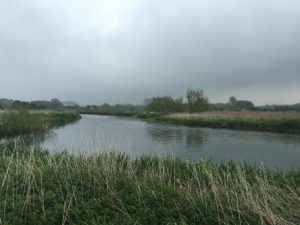 The unusually named Chimney Meadow Nature Reserve runs alongside my path for a while, until the river reaches Tenfoot Bridge. It’s a superb 249 hectare site, given over to nature and managed by BBOWT. An estate or farm is known to have existed here as early as 1069. ‘Chimney’ in this context means ‘Ceomma’s Island’, reflecting the low-lying position of the land, surrounded by water courses. It is indeed very flat. There is a rich diversity of wildlife with 11 miles of waterways, wet grassland areas and ex-arable land which is now reverting to flower meadows and hay meadows, with small patches of woodland and seasonal ponds. I’m lucky enough to see three of the snipe that have been encouraged by the conservation. 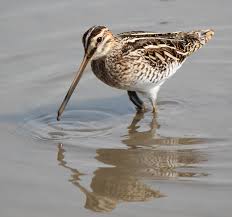 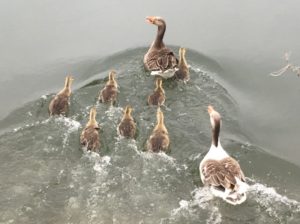 Birdlife abounds, especially swans, ducks and geese with their young. 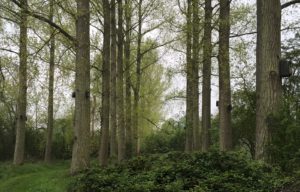 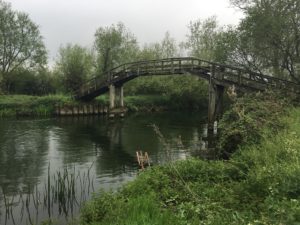 The rain has started to fall and for the first time I fish out my waterproofs, actually quite pleased that I can wear the only pieces of clothing that have so far sat at the bottom of my backpack. I get to the promising looking Trout Inn at Tadpole Bridge too early for lunch, so while away the twenty minutes or so looking at the bridge. 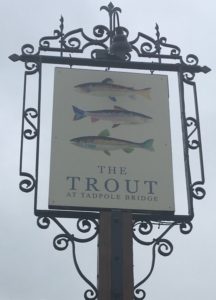 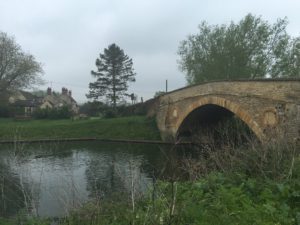 Despite its promising name, Tadpole Bridge has just a single arch and is rather dull. It was built in 1784 but I can find out nothing which elaborates on the origin of the curious name. Mr S Thacker in his 1909 book ‘The Stripling Thames’ suggests that it may have been changed from Toad Pool, which would have been fitting had it been built further downstream in Kenneth Grahame territory.

There is nothing that is disappointing about The Trout, however. The welcome is extremely warm and the food utterly delicious. Definitely a pub to return to. The table next to me is occupied by two American ladies, who are making their way downstream on the Thames Trail. They tell me they have spent the morning as guests of an hospitable stranger on a barge, who treated them to tea and cake, while covering several miles of the journey. While I applaud their ingenuity, I’m not entirely sure this is what is meant by ‘walking the Thames’.

The rain has cleared by the time I leave and I thoroughly enjoy the twists and turns of the meandering river, drinking in the tranquillity. It is only now that I realise the real reason why I decided to walk the Thames backwards .. it is so that I increasingly feeling the solitude and peace that comes from leaving the city and the ensuing towns, villages and houses behind. 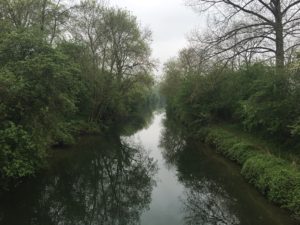 The weir at Rushey is of the old Viking style ‘rhymer and paddle’ type. There are very few weirs of this construction still in use and the handles of submerged paddles can be clearly seen in the water.  The passage of water can be controlled by removing and replacing the paddles. Old paddles are still stacked up against the fence. 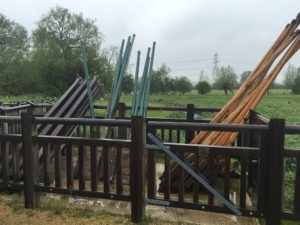 Not long after Rushey I come a little unstuck .. 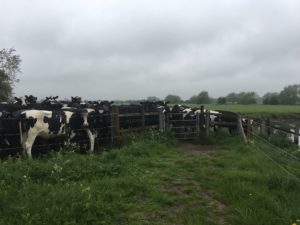 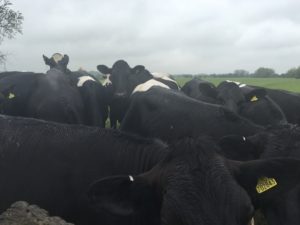 See what I mean??

Now I know the photo doesn’t look much but actually there were 50 or so heffers beyond the gate, through which I needed to pass. The river was on the right hand side, barbed wire to the left. I summoned up my courage and put on my best Ruth Archer’s voice, telling them to ‘Gaarn’ .. but they were not in cooperative mood. They would take a couple of steps backwards and then surge forwards again, very curious about this two-legged, arm-waving creature wanting to get into their field. I texted country-type people to ask them what to do and phoned Tony to get his advice. But it seemed nothing was going to budge them. I was resolved to walking back and finding another route when salvation appeared in the form of the Vicar of St Mary’s, Thame! Halleluya! He and his friendly flock of followers, out fund-raising for World Vision, joined me to create a human tank and we ploughed our way past the cattle to the promised land. I will be forever grateful to them and thoroughly enjoyed walking the next couple of miles with them, past Old Man’s Bridge to Radcot Bridge. 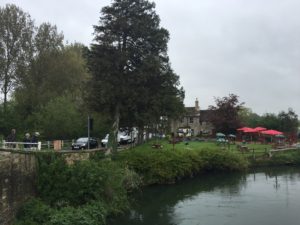 The vicar from St Mary’s Thame, at Radcot Bridge

Rather confusingly there are three bridges at Radcot. The reason for this would be revealed as I read the history of this interesting little place. Radcot means ‘cottage by the road’ and it is mentioned in the Domesday Book as a two family unit with 24 acres of farmland. It was probably monks who built the original, middle bridge in 1225 and as such it is the oldest bridge across the Thames. As the construction industry grew in England, so too did the settlement at Radcot. The honey-coloured Burford stone was very popular in Oxford and London and the best way to transport it was on the river. Wharves were built at Radcot to accommodate the need. At first they were small .. light loads of stone were taken in small vessels down to Oxford, where they were transferred to larger barges. As the demand grew however, so too did the size of the loads and thus the size of the boats and of the wharves. As a result two new bridges were built: Canal Bridge and Pidnell Bridge, thus creating the chain of three.

If you look carefully at Radcot Bridge you will notice that the centre arch doesn’t quite match the rest. This came about, way back in 1387 when Henry Bolingbroke (later Henry IV), took the drastic defensive action of removing the middle part of the bridge to prevent Robert de Vere, Earl of Oxford from charging forward and challenging the crown. Latter day Dambusters! Over 250 years later the bridge was again the location for a major Civil War scuffle. The Royalists had captured and held many of the bridges in the area and had created a garrison at nearby Radcot House. This significant presence helped to maintain the supply of arms to loyalist Oxford. But in May 1646 there was a battle at Radcot, the bridge fell and as a consequence, Oxford became a Roundhead stronghold.

Looking at the bridge today it is difficult to envisage such activity. It makes me think that organisations like The Sealed Knot do a wonderful job of recreating history and making such unimaginable happenings imaginable.

I say my adieus to the good folk of Thame and walk on, past Rhodes’ Farm to Kelmscott. It was here that the artist and socialist William Morris lived from 1871 until 1896, in the manor house. I spent a good deal of my time at uni studying the works and times of the Pre-Raphaelites and the Arts and Crafts Movement of the 19th century and so am disappointed that I can’t see the house from the river. Huge trees surround the property and there are countless rookeries in the branches. The accompanying cries of rooks is raucous. I resolve to return to see the house on a less wet day. 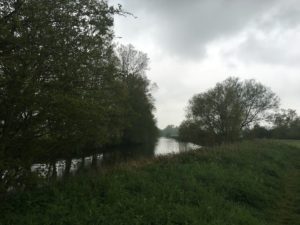 The river at Kelmscott 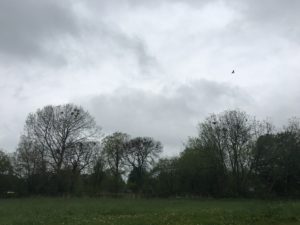 The rookeries around Kelmscott House

Passing by Buscot I then come to the newest bridge on the river. While it looks to be constructed of wood, in fact it is only clad in wood, disguising 27 foot steel spans. Apparently the chaps at RAF Brize Norton airlifted the whole construction into place using a Chinook chopper.

This stretch of the river is called Bloomer’s Hole. Another intriguing name. There are two theories as to its origin .. one tragic and the other rather fun. Bloomer was either the name of the carter who drowned while crossing the river with his horse and cart or the name of the local vicar who scandalised his parishioners by skinny-dipping in the river! I know which I prefer to believe. (Nigel .. how about setting up the English alternative to the Sydney Skinny here!!) It is not long after that I come across a family of swans and their cygnets. I walk at their pace as they travel upstream, the pen laden with precious cargo. It’s a magical moment in the day. 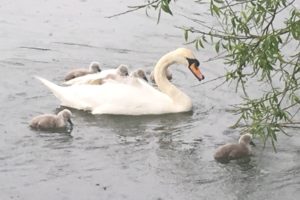 Swan with her cygnets

As I approach St John’s Bridge I can see that the river is joined by two others: the River Cole and the River Leach. There was once a priory here in the 13th century which sadly no longer exists. However, there is a very important man who resides here: Father Thames. 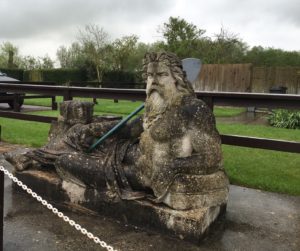 He was sculpted out of a block of Portland stone by the Italian, Rafaelle Monti, for the Great Exhibition of 1851. He was later moved to the source of the Thames but I can only imagine that he was seen by so few people, that he was relocated in 1974 to the busier St John’s Lock. I pay homage to the custodian of my favourite river and walk on in the teeming rain.

The last stretch of the trail is across a meadow, strewn with very territorial swans. I make several detours so as not to disturb them .. it seems to be the day for animal domination.

At Lechlade I climb uber gratefully into Tony’s car, to go back to his and Mandy’s place, for a more than usually welcome bath, a glass or three of Sauv Blanc and the opportunity to dry out. Thank you to both of you for saving this rapidly drowning rat.

The Dog of the Day was saved till last .. 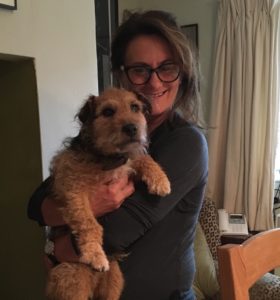